A Tale of the Big Box Duke 3D Copy

A Tale of the Big Box Duke 3D Copy

Was going to post this in the "What did you do last..." thread, but I figured it's going to be rambly enough to warrant it's own thread.

Ever wanted to find a big box copy of a game that can go for hundreds of dollars on Ebay because everyone who's into retro gaming wants it?

I'm in that position.

Simply put: I'm trying to track down a boxed copy of Duke 3D... could be the Atomic Edition or the regular edition. Doesn't matter to me.

Problem is it's an old, out of print game... and it goes on Ebay for hundreds of dollars, even a used copy.

Here's the problem... as someone who is, at the moment, on a limited income, this sucks.

People might ask... why that game? Isn't it available through the World Tour, or Megaton edition? Or if you had it back in the day, the GOG copy?

However, owning the Atomic Edition is... more of a sentimental thing for me.

See, back when I was a kid, my mom's ex-BF and I went into a Babbages and I saw a copy of Duke Nukem 3D Atomic Edition... and there I was, the young lass who had played the hell out of the shareware copy we bought for like... 10 bucks. So I really, really wanted this.

And we did get it. I played the hell out of that game. I loved the level design... the Shrinker is a cool ass weapon. I really liked the fact Duke 3D took what made Doom great and just upped it to 11. It was truly one of the best games I've ever played. Not to shit on Doom (I really like Doom) but despite it's jankiness... it's buggy nature... and of course the fact the Build engine is a nightmare for me, personally, to use... I much prefer Duke 3D over Doom.

So... at some point I lost not just the box it came in... but also the CD... Jewel case and everything. And I was no longer able to play it on our machine.

My memory is a bit foggy, but I remember my mom cracking down hard after the Columbine shooting on what content I'd play. Whether she was in the right or in the wrong is up for debate, but I recall never seeing the game ever again. I could ask her what happened, but my mom and I... have a tendency to butt heads and she'd probably tell me some cock-and-bull story.

It was not until someone gave me a GRP of one version of Doom and JFDuke3D did I play it again. Not one to condone piracy, the minute I saw it available on GOG, I nabbed it because the game deserves it. I even bought the Megaton and cursed Randy edition. Even with Gearbox's mitts on it, it's still Duke... and I still love it.

Recently, I did find a copy of Duke 3D Atomic Edition - just the disc, jewel case and the manual. Given my limited budget and ability to go to thrift stores... that's about all I can muster right now with disability income. I plan on buying Duke 3D registered just to have it. Plus finding a legit copy of Duke 3D's 1.3d GRP is hard to find due to GOG/Steam copies having 1.5 GRPs instead - and those are the Atomic Edition.

It might seem something stupid to spend money on... but there's something sentimental about me owning a copy of Duke 3D... a boxed copy of either registered version. That game is pretty much the origin of a ton of my interest in modding. Doom and Duke 3D equally contribute a ton of sentimental value to me - but lately I've been thinking about that boxed copy of Duke 3D that I miss dearly.

I'm on the hunt for someone who has a copy and wants to part... and isn't going to make me cough up 400 bucks or my pancreas to give it to me. Problem is, I dunno what is a "good price" for something like this.

How boned am I in my hunt?
Top

You have, through no fault of your own, possibly chosen the worst time to want to purchase a boxed copy of any game, PC or otherwise. For whatever reason, the market for retro games has gone Absolutely Apeshit over the last year, and old games - especially well-regarded ones with questionable re-releases - have utterly left orbit in terms of prices. Barring getting really absurdly lucky with somebody who doesn't know what they've got, or happening upon somebody's New Old Stock, you're probably not going to be able to afford it on your kind of income.

That's exactly what I'm talking about. Why is a game like this cost 380USD? It makes no sense.

It's a shame really.
Top

SanyaWaffles wrote:That's exactly what I'm talking about. Why is a game like this cost 380USD? It makes no sense.

It's a shame really.

That's what you get with unique items or products which went out of production and have become collectibles since.

It's their inevitable fate. The price drops at first but after that it skyrockets into oblivion because they're simply not being produced anymore and are irreplaceable. Not so much for the game itself in this case as much as it is the way it was packaged and all the goods that came along with it at the time.
Top

Maybe try looking on non-American sites? A lot of what you find won't be available for international shipping, however you could use a parcel forwarding site - https://www.myukmailbox.com for example.

On a related note I didn't know about the recent demand for big boxes. I have at least a couple dozen in my parent's attic (mainly old adventure games and RPGs), so I'm going to go see if any of them are worth anything

I wanted to let people know the story has an ending now. 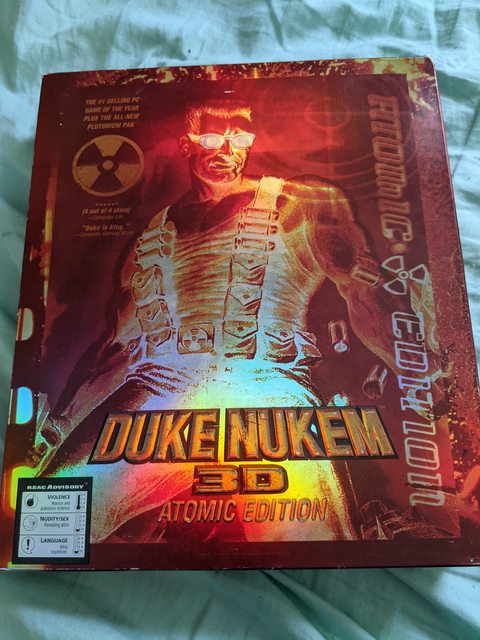 Long story short, a friend of mine bought me a boxed copy off eBay. The price was reasonable and was in a decent shape.

It didn't have everything in the box, but that's okay because the person on eBay gave me the Duke 3D and Plutonium Pack strategy guides.

The only major problem is the bottom of the box isn't very sturdy (not necessarily a dealbreaker, I got it for the sentimental value and I have several copies of Duke 3D digitally that don't require the stupid CD check)

I plan on trying to set up a bookshelf to store it in. I wish I had a better way to display it than that though.
Top
6 posts • Page 1 of 1