America is an irradiated wasteland. Within it lies a city. Outside the boundary walls, a desert.
A cursed earth. Inside the walls, a cursed city, stretching from Boston to Washington D.C.
An unbroken concrete landscape. 800 million people living in the ruin of the old world and the mega structures of the new one.
Mega blocks. Mega highways. Mega City One. Convulsing. Choking. Breaking under its own weight. Citizens in fear of the street.
The gun. The gang. Only one thing fighting for order in the chaos: the men and women of the Hall of Justice. Juries. Executioners.
Judges.

So this is it. A few years ago, when I got into Doom modding, I made the Lawgiver MkII weapon mod. It was a horrible DECORATE mess, but it kinda worked. Then I tried my hand at ZScript and revisited some of my old projects.
Turns out what I want to do is much easier (albeit more complicated) to do with ZScript. Then I got kinda hooked again and decided to expand it a bit and suddenly things exploded and got REALLY ambitious.
The result of this is the beginning of a total conversion for Doom 2 that is set in the world of 2000AD, more precisely, in and around Megacity-1, where the judges rule with an iron fist.

You are Judge Doom, an amalgamation of different judges, known and unknown, going about his daily duties. With your trusty Lawgiver by your side and an air of authority, you must respond to calls and JUDGE THEM.

Download HERE and make sure to read the README! 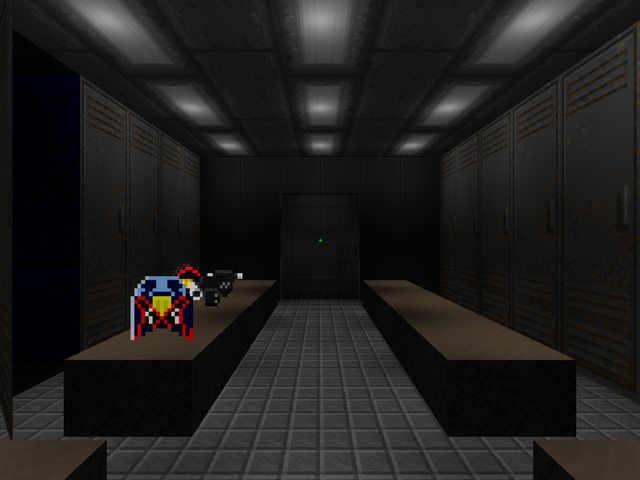 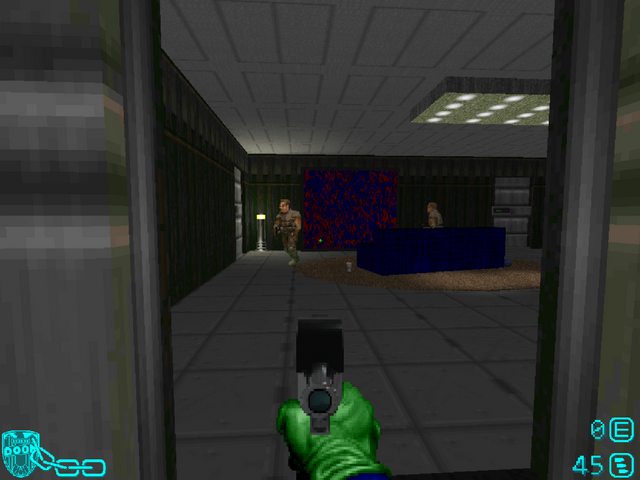 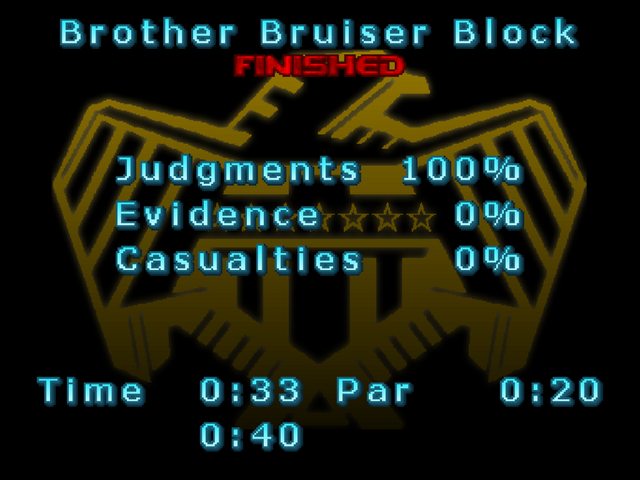 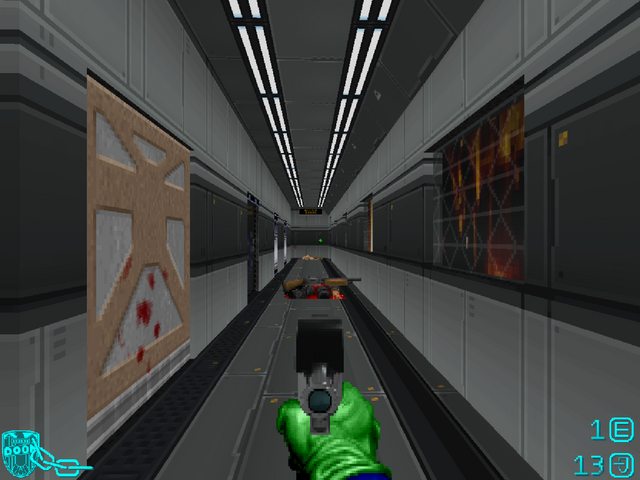 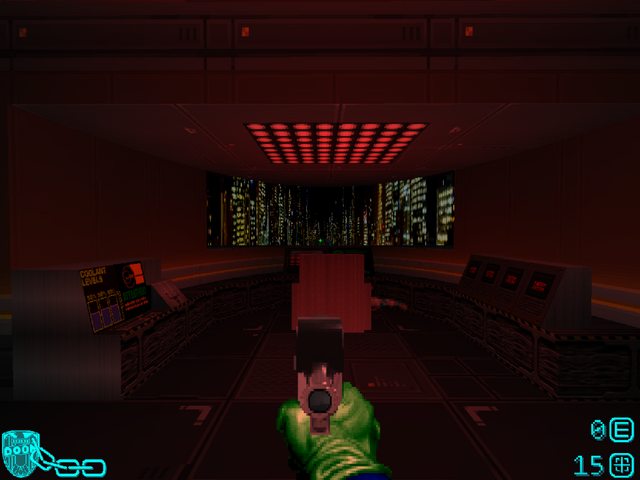 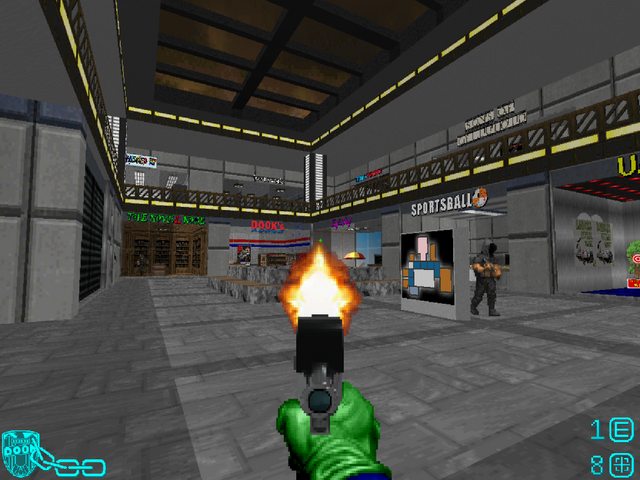 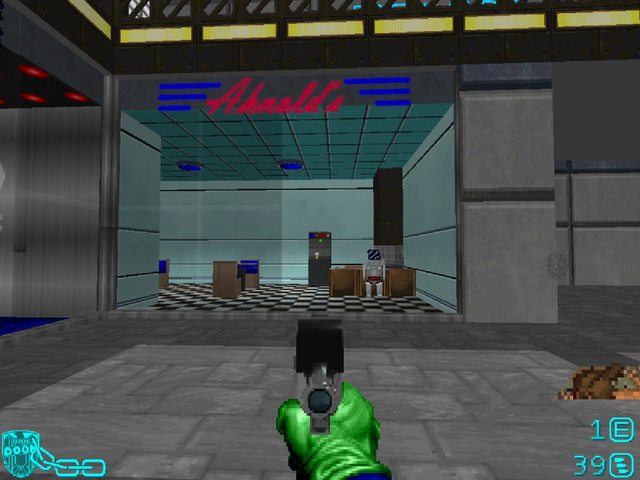 What I tried to do here, or what I AM trying to do, is to have each call be a task that is to be solved with only the tools at hand, which is pretty easy in the beginning, but needs careful planning and a cautious approach later on.

The general idea of this mod is as follows: Please note that this is a really early WIP... well, it's more like a proof of concept actually.
But I am currently not able to work on it since there is enough private stuff I have to take care of (as a matter of fact I haven't done any work on this mod since last year), so I decided to publish this as it is, so that in case of me dropping it someone interested has the chance to pick it up. This does not mean I am dropping it right now, it's just that I won't do any further work on it probably until the end of the year, but if there is ANY possibility of me coming back to it, I will. It also means that I won't be really active on the forum and only visit occasionally. Of course I will still collect any feedback. Please also note that I already have tons of ideas for levels (hell, just reading through the case files gives you already a thousand possible settings).

Also, before anyone complains: This mod is NOT set in the canon 2000AD universe, which means there are certain anachronisms, inconsistencies and inaccuracies and I am fully aware of that.


Spoiler:
Also also, how the FUCK can I get the logo picture to appear in the thread list? I really don't understand the system here

Thank Grud for this; having played a demo off a CD, IIRC, of one of the early Dredd shooters, it was too unlike Doom for my taste and brought my then-computer to a near standstill. I'll definitely download this and take a look.

Spoiler:
Also also, how the FUCK can I get the logo picture to appear in the thread list? I really don't understand the system here

Don't you mean 'How the Drokk', Citizen

Seriously, that is is an ongoing forum issue and will likely need the admins to upgrade the forum software some day.
Top

I always wondered why there was no proper Dredd TC for Doom, now finally we get one! I will follow this with great interest. The old Dredd vs. Dead game was quite fun, especially since you could convict random citizens for illegal pet goldfish posessions, netting them a cozy 30-year sentence!
Top

This is really good so far. I always really wanted a Dredd Doom mod. Thank you for this!!!
Top

Great work so far. My only complaint is that it's a hassle to switch fire modes for your gun.
Top

Sounds great. Not many FPS games have been made on the judge dread universe.

Just her to say "hi, I'm still alive" - I also plan to continue working on the mod in the near future, maybe make a new map or two. Enemy overhaul is also needed, I realized having that many 360 noscope hitscanners might be a bit too much, *cough*.


MidKnight91939 wrote:Great work so far. My only complaint is that it's a hassle to switch fire modes for your gun.

Can you specify what you mean? Have you bound the commands for each firemode? Or do you think it takes too long, or is it not consistent (because it's a really hacky way of choosing the firemodes) or is it something else?
Top

Eyy glad you're back! I was wondering what's gonna happen to this thread since i'm intrigued that Judge Dredd themed doom TC is being made.

And say, you can arrest Perps without killing them? Then is pacifist run going to be possible in all levels?
Top

Captain J wrote:Eyy glad you're back! I was wondering what's gonna happen to this thread since i'm intrigued that Judge Dredd themed doom TC is being made.

And say, you can arrest Perps without killing them? Then is pacifist run going to be possible in all levels?

Yeah, real life got in the way and so on.... It certainly will take some more time until an update is posted, I'll first have to get back into my own code lol.

But generally, it is indeed possible to arrest perps without killing them (when they're dead you can't arrest them anymore anyway).
Arresting someone is a two-step process. First, you need to hit them with the Judge Shout which has a chance of frightening them, or making them actually "freeze". Both cases enable you to then arrest them.
However, the chance is almost never 100%, so if you have bad RNG even the first one will shoot you dead before you can even take out your handcuffs.
But that's also subject to optimization, maybe making them less aggressive in the first place or changing the threshold (and way) of them actually reacting to the Judge Shout.
Top

Just wondering, are there any ideas for soundtrack?
Because Judge Dredd has audiobooks and i remember this one having an intro theme:
https://www.youtube.com/watch?v=Hfg7BDOiEDI
1:27 is the theme i mean.
Top
11 posts • Page 1 of 1