I love Undertale. If you've performed the incredible feat of not having heard of it, Toby Fox's adventure from 2015 is a wonderful mixture of whimsical nostalgia, charming characters, innovative gameplay and having the worst nightmare of your entire life. The thing responsible for that last part is a being called Chara, who is an evil presence within the game’s world and is implied to be influencing the player's decisions if they choose to resort to violence.

Back in 2016, Ribo Zurai saw Chara's potential in a game where violence is very much the first resort, and created Determination. This is a WAD that replaces the player character with Chara themselves (itself?), armed only with their rosy cheeks and a small knife that can one-hit kill everything in the entire game. 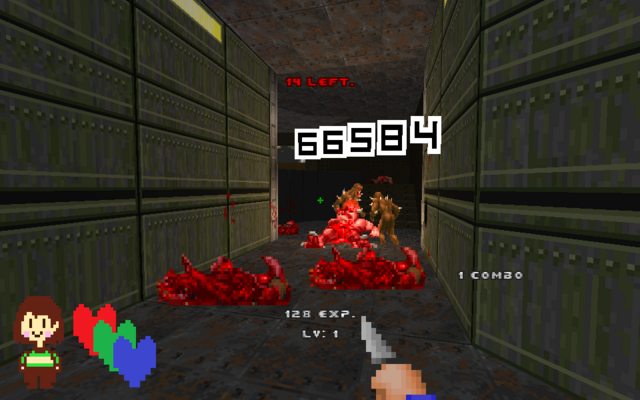 This mod, as the author says, is for people who would like to enjoy a bit of mindless genocide. All weapons are removed from the game and you’re only able to attack by stabbing a small distance in front of you - Chara’s weapon the Real Knife will instantly destroy even the strongest bosses, but needs to get right up against them to do it. The maximum health of the player is also doubled to 200 to compensate for Chara having to take a bit of a punishment to get up close to enemies. I was about to complain that the sleeve visible below the knife was coloured blue while Chara’s top is obviously green, but then realized exactly why that was, and if you’re a fan of Undertale you may have just experienced the same sickening feeling that I just did.

There’s a bit of HUD work to replace the standard counters with Undertale-style hearts that fill up depending on your health and armour. The green third heart in the middle keeps track of your stamina, which is depleted each time you make a stab and then regenerates, but you have so much of it that the limit is never realistically going to come into play.

Placed front and centre of the new HUD is a counter that keeps you updated on you how many monsters are left, counting down as you burst them one by one and acting as a continuous reminder of Chara’s lust for genocide. When you’re the last thing on the level left alive, the music cuts out and is replaced with a deeply unsettling drone, a horribly distorted version of the Undertale theme that surely plays in Hell’s waiting room. You then move to the exit and continue your slaughter. 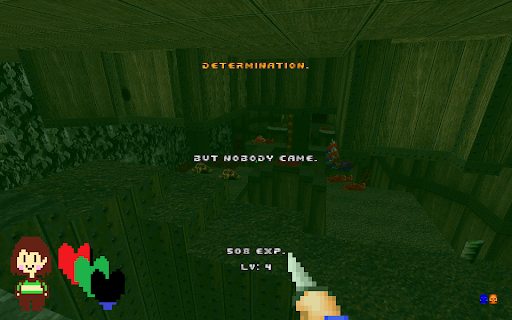 The mod is written in a way that doesn’t touch any monster code, so you can play it successfully on top of most custom enemy WADs - I even got it to work with Heretic, though the HUD didn’t quite carry over correctly. And it’s full of nice little touches to set the mood - adding floating RPG damage numbers, replacing the death sequence and the sounds with the ones from Undertale, and even providing new quit messages. If you look closely through the WAD, you’ll also notice that it contains a few ominous variables:

It's not something you're necessarily going to want to play through an entire megawad with, but it's an interesting novelty of a crossover, and a great little example of what you can do with just a bit of Decorate and ACS. 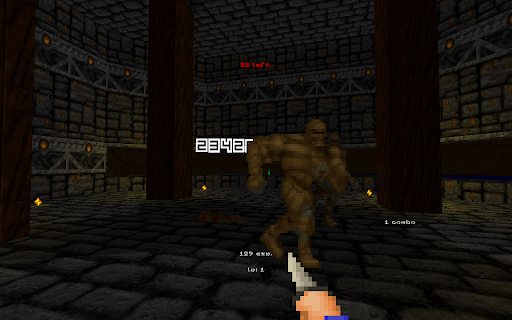 Interesting. I wanted to do this Doom mod,
Quickly took my idea.

Because I wanted to do this in 2017, but my little trouble is that
somebody is ahead of me and I'm a little grumpy.
Top

suraku10 wrote:Because I wanted to do this in 2017, but my little trouble is that
somebody is ahead of me and I'm a little grumpy.

Do something else, then? Or do your own version anyway?

What do you expect us to do about it?
Top

I would like to see the doom mod based on Deltarune characters... Like Jevil. Because why not?