Another ridiculous idea of mine: Doomsday Machine!

Doomsday Machine aims to bring the gameplay of the Amiga classic The Chaos Engine to Doom. I have tried hard to convert everything from the game faithfully into the 3rd dimension, including almost complete replicas of the levels.

One of the things that inspired me was this twitter post by Antto Koponen, described in greater detail on his DeviantArt page:

Gameplay overview:
The first two levels have been included.

Choose between three different characters: While exploring a level, keep an eye out for ambushes. Cave entrances and holes in the ground will appear that spawn monsters. Kill monsters to collect the coins they drop (no use for cash yet, though). Special powers work as follows: If you have unlocked one (such as the special powers you get from the start as part of your chosen character), you will first use all you have collected of the same kind before using the universal special power items (orange bars in your status bar). If you haven't unlocked a special power, you will simply run out of that item when it is depleted. So, special powers are exlusively used for your unlocked powers.
To open the exit door, you have to activate a certain number of nodes by shooting them until their outer shell breaks.
Silver and gold keys open or close different paths through a level. Sometimes, collecting items or just reaching a certain spot will do the same.

The Guru Meditation on Youtube has uploaded a very detailed instructional video should you have any trouble getting the game to run.:
https://www.youtube.com/watch?v=lFn_RfeNiRA

On developing this TC:
It started out as a newfound fascination with this classic game featuring the incredible artstyle of Dan Malone. In lieu of a proper new game set in that universe, I tried to adapt GZDoom as a way of finding out wether a top-down action game would be a good fit for the first person perspective. I had to learn how to zScript status bars and use GZDoomBuilder to make my first real maps, with heavy use of ACS scripting for the game logic.
The weapons were all carefully modelled after their original sprites. Some graphics also had to be converted or even created from scratch.
In hindsight, converting the levels one to one doesn't work too well since TCE obviously has no concept of shooting up or down, and the already confusing labyrinthine levels of the original game become even more confusing in first person view.
The gameplay limitations might also be confusing for the player, such as being blocked by water/mud and not being able to jump down from cliffs.
The levels were created with a tile-based approach, which means having seperate small sectors for each ground feature. This affects performance in the second level because there are also no "hard" blocking walls thoughout the rather large area. For new maps, I would probably do it like the surrounding "off-limits" areas of the second level, where I assembled a texture from tiles beforehand and just slapped it onto one big sector. This would also make sound zone boundaries far more easy to set up.
In some places, nodes can simply be shot from afar or above when they would be unreachable in the original game due to some bridge or stairs appearing or disappearing. I have thought about using special nodes that can only be activated from a short distance.
On the weapons: I like the bazooka, the lightning gun doesn't look as good mostly because I didn't bother with creating a proper texture for it. The rifle is even worse because I couldn't find a hand graphic for it.
Some Bridges on the second level are models, some are normal map sectors, so not all will show up on the map.
I'm not sure if I will ever sit down and create more levels, mostly because of the heavy work involved in scripting all the ambushes and puzzle elements. 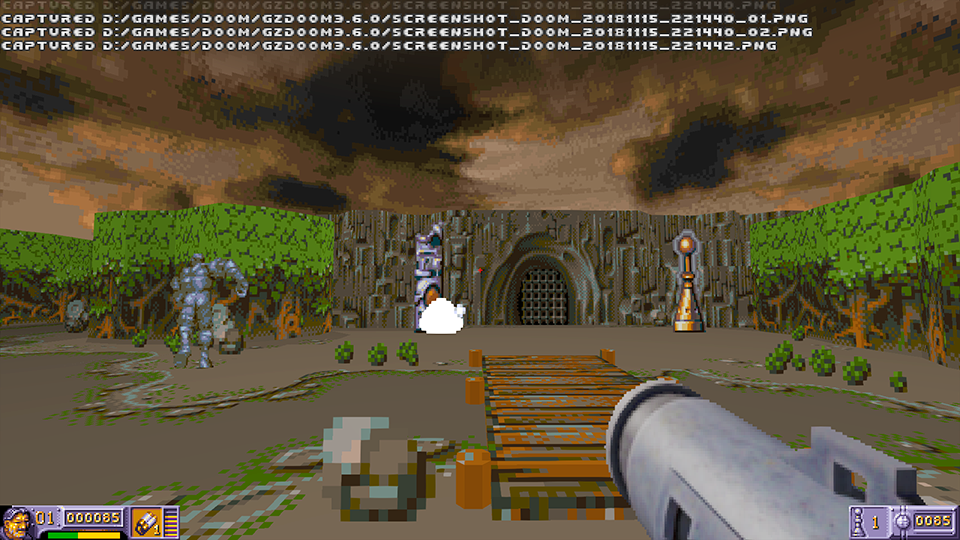 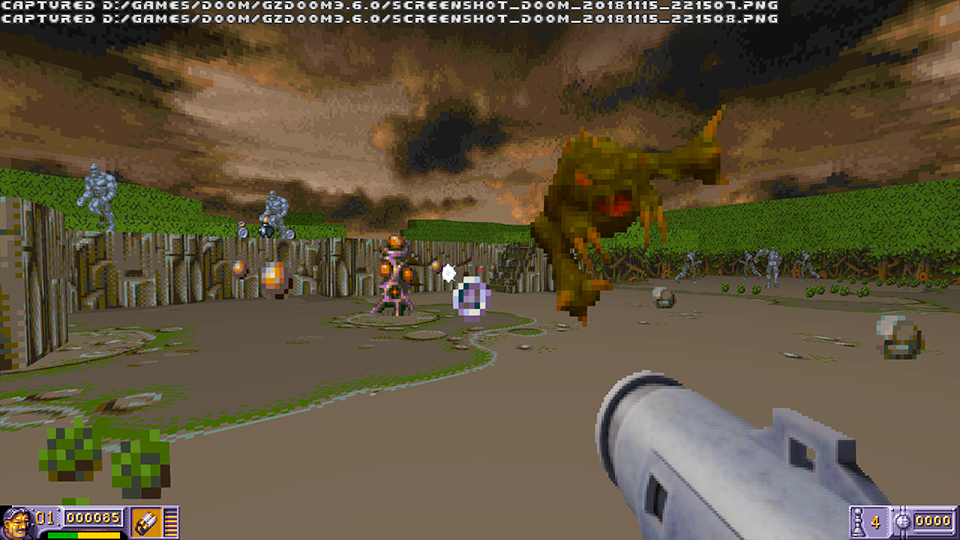 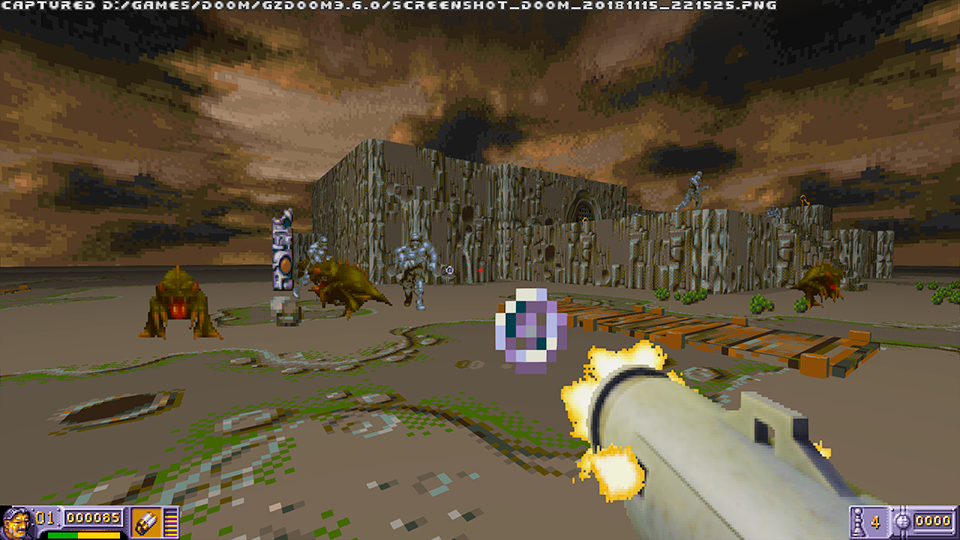 Ok, this looks like very interesting project, I loved the Original Chaos engine back on the Amiga.
btw, That OP Gif is badass..
I would like to see further progress on this mod, bookmarked!
Top

Why am I just seeing this now???

This is freakin' awesome. I haven't tried the download yet as it is late and I should be sleeping, but I will grab it ASAP and let you know what I thought.
Top

This is amazing. Also, I've suddenly been hit by the idea of GODS + ZDOOM
Top

Here is some gameplay footage:


The Guru Meditation on Youtube has uploaded a very detailed instructional video should you have any trouble getting the game to run.:

Here are some renders, along with their original pixel art counterparts, of the weapons featured in the mod so far: 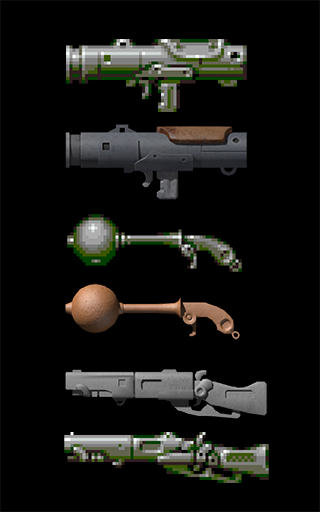 I just gave this a try and thought it was interesting, but definitely in need of more maps, so I hope you add more.

Anyway, I noticed a couple of bugs on the 2nd map. When you start it the HUD says you need four nodes, but there are five on the level. If you shoot four of them the counter goes down to zero, but if you shoot the fifth one it goes back up to one and you can no longer finish the map. I'm not sure that this is the intended behaviour. Wouldn't any extra nodes activated just leave the counter at zero? Also on the 2nd map, there seems to be an area that you cannot get to (near the building with the exit, by a node) as the bridge doesn't touch the land so there are a few coins and pickups that you cannot get to.

As for other feedback, the HUD scaling isn't great. At higher resolutions it shrinks to a very small size, and if you scale it up then it changes position. In other mods I've played the HUDs can be scaled nicely, increasing their size but maintaining their positions. Also, I'm wondering if the addition of a short range radar might help, as in the original top down games you had sight of enemies all around you, but in this 3D take on the game you have to rely on constantly looking around and are often caught out by enemies spawning nearby. I don't know whether this idea would work, and if implemented then it might need a balance change, so this is just an idea.
Top

On the second map, the exit doesn't work regardless how many nodes are activated, there simply isn't any linedef action that changes maps.

The node activation number is accurate (4), but since the map is still not completely finished, you can shoot all 5. In the Amiga version, you can only activate 4 nodes since you have to decide between two of them with the other one becoming unreachable. With the longer weapon ranges of the TC, this can be overcome by simply shooting across the map. I think I corrected the 0 -> 1 display in the newest (internal) version, though.

The unreachable area you mention is so by design; in this map, once you come to the islands in teh center of the map, you have two choices: Either collect the keys on the small island with the long bridge leading to it, which opens up the northern route, or go to the node to the southeast, which makes the keys disappear if you activate it but opens up the eastern route. So, it's one of the two.

About enemies spawning nearby, I agree that it is currently not implemented well. I have thought about using a sound for when a spawner (floor or wall spawner) appears, and another sound when an enemy spawns. That should help the player know that something nearby is happening. I also plan to show hud messages when picking up keys and triggering things, like "a door has opened to the east").

I spent so much time and effort getting the hud to look right on my setup (first time zscripting and all) that I didn't think of testing different resolutions and hud scales. Something for the next version, I guess.

Thansk for your feedback, it helps me a lot.
Top

Just tested some HUD scaling settings and the way I wrote the status bar is to use a HUD scaling of around 4 (doesn'T really matter, though), while all override scalings are off (use default size).
Top

Cherno wrote:Just tested some HUD scaling settings and the way I wrote the status bar is to use a HUD scaling of around 4 (doesn'T really matter, though), while all override scalings are off (use default size).

Ah, I see. That works well enough. It's odd how the Fullscreen HUD and Statusbar HUD override settings mess up the scaling, though, what with how they change the position of the HUD elements. I'll juse use the master UI scaling option for it instead.
Top