Exactly what it says on the tin. When I started tackling making ambient music in November of 2021, I didn't expect to put together my very first album in less than a month; much less that I'd find myself making music packs for two mods I greatly enjoy and was able to contribute to (Nightmare Logic and Protocol: Disposable). I was surprised people even listened to what I made in the first place, given it's hardly professional or even "that good" even if it has been compared to the work of actual musicians.

Anyway, you're here for the music packs and not for my confused attempts at rationalizing what I do. I just sit down and do stuff. My channel has links to download the albums themselves. 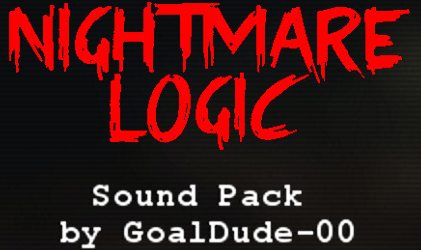 
Spoiler: personal comments
When I originally started working on this music pack, it wasn't really supposed to be for Nightmare Logic. It was just supposed to be another one of my original albums and the order the tracks are arranged still does somewhat reflect that, but the vast majority of tracks were made specifically for the mod. It's also the first time you'll hear me using some instruments to lend them some more musical qualities and all in all, I'm happy with the final result and Cosmo was very happy with it too - win-win. You also get to hear me cooing like a dove in track 13 (Sunrise). The one thing I initially didn't like about the music pack itself was the fact it's actually a randomizer, but over a hundred hours later, I think it works just fine.


Spoiler: personal comments
You might see a pattern here - when I started this one, it was actually going to be a Yume Nikki-inspired album. Some tracks had names that reflected this, such as Keys World and Fog World. Then I asked Loss if he wanted me to make a music pack for his mod, he said yes, I got to work and delivered a couple months later because I felt his need surpassed mine. While this has less tracks than Nightmare Logic's music pack, I actually think its quality is a bit higher as I managed to make some really...interesting effects with Audacity and a few free sequencers/trackers, to the point that I already kinda knew what I wanted to do with my next release. Each episode is also separated by a specific track, which slowly rises in terms of spookiness until you're on map 28. You may notice I have a thing for putting calm, relaxing songs on the map 29 slot, too.


Spoiler: personal comments
My first truly "original" music pack. I was going to make a mod and have this as the companion, but...eh, didn't work out. There's some lore too, but the gist of it is you'd play as a small cyborg called Vikha. His mission is to infiltrate a cluster of binary space partitions and just excise the monsters there. Pretty simple. The only real noteworthy concept is he wouldn't die when his health hit zero, he'd shed his outer body and remain active with half his health pool, but his movement would be faster and his armor would become stronger. It'd come back after like a minute or whatever, I never worked that part out...anyway. Hope you like this one. Vikha wasn't wasted, thankfully.

This is also my longest album to date. It's one hell of a weird trip, but I'm happy with how it played out in the end.