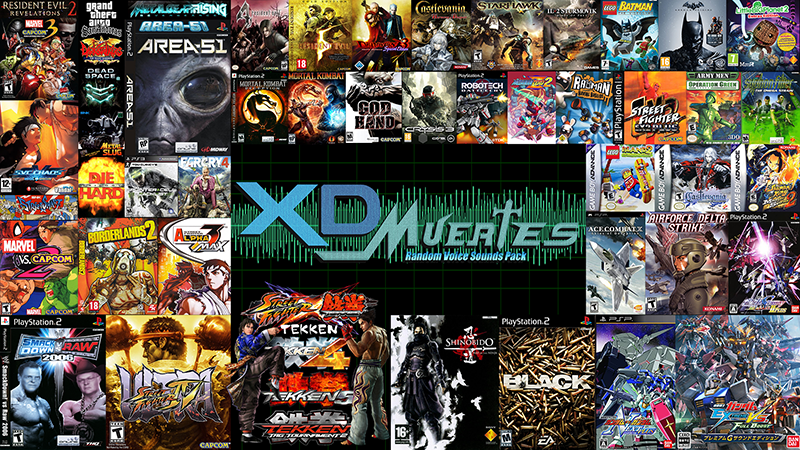 (all games, logos and sounds are property of their repective owners)


"XD_Muertes" is a FREE compilation of more than 3000 voices and sounds
obtained from different Video Games which replaces several Doom sounds.
the purpose of "XD-M" is to be funny

by mixing and randomly playing some of the
thousands of sounds present in its database.

this Sound pack was built primarily for the Source Port: Zandronum
although it can also work in GZDoom with some differences.

the shared XD-M11 2.0 has improved its Doom sound replacements.
but there are still many categories of sound to be defined. especially in Hexen.

Download the audio pack version [2.0] with this link:
(make sure to give it the highest priority when running it with other Maps or Mods)
https://drive.google.com/file/d/1fUCtHd ... share_link

Here are some gameplay:


Doom iwad with XD_Muertes only:

DETAILS: wrote: Now, the large database is organized into several
folders that could be separated into 3 huge groups.

"VOICES:" this group contains a large number of voices
from different games, of which the following stand out:
Black, Tekken, Gundam, Shinobido, WWE 2006, and Area51.

These voices are divided into 5 parts:
Also, many of the voice folders are marked with the (ALLY) tag.
because only "allied" characters as players will activate them.

and finally there are also female voices. these are destined
to be activated only by players of gender "female".

"SOUNDS:" this audio group is sound only.
there are several sub categories of hits, Defeat, comedy, metal, cutting and gore.

there are also POWERS sounds that are mostly
activated by the Archvile.


"IWADS:" although DOOM is the most complete, this group of sounds
aims to replace all the main sounds of each IWAD

Doom is the one that stands out with unique voices for each enemy they stand out from.
MBFhelperdog, Revenant & Archvile.

Also included is an optional .wad containing custom Sprites
for all of Doom's weapons, some enemies and some New Graphics for menu.

"Loquendo TTS" is also included in the form of an announcer.
but this speaks only in Spanish.

these sounds dont sound bad at all. just one thing i should note though and that is do you think you can chnage the sounds of the blood? to be more specific of when the monster get gibbed. the blood droplets and drips are very loud when they hit the ground which doesnt sound right i wanna say. i know you said in your warning they are loud af (lol) but when that sound que of the blood gibs play it just sounds out of place and drowns the other sound effects that im curious to hear provided that alot of sounds was put into this. so maybe i think that the sounds of the blood when it drips should be lowered down a bit or changed. my thing is when one sound just drowns out the others it just kinda kills the curiosity of what other sounds wants to play in the back. thats about it. other little things like the moving platforms when walls finish moving or elevators stop moving instead of having a stop sound like a "thump" it makes a beep like sound instead. so yea just feed back im just giving here and hopefully youll make adjustments here and there. i might play around with this mod for a bit just as long as i dont pick a mod that has its own custom sounds that comes with that mod that is exclusive to it bc it will overwrite even though i load this mod last
Top

Yes, I will prepare a new version with those adjustments.
the pack was only tested for a week but i really wanted to release it before halloween.

Years ago when I barely had sounds,
the platform stop effect was obtained from the ace combat 4 menu
and I didn't update it because I thought it was so really funny.
But I think it's time to give it more seriousness.

Thank you for your comments. If you have more, let me know please.

of course. and since you have such a colossal sound mod here is it poosible to add sounds and more voices from a game called condemned criminal origins. thier voices and thier taunts are not only like crazy but funny and a bit over the top. i think they be great for this sound mod. if you played condemned from the ol xbox 360 days i used to play it all the time even after beating it just to hear the sounds and their packs from that game. check it out when you can. thats one of my biggest suggestion to that. again this is great stuff. especially the sounds from gundam series the clashes and the hit impact. idk when that sound plays but i checked ut the sounds you used from slade and noticed and tried to see when those sounds play during gameplay. if i think any more suggestions. ill continue to give feed back with this. hopefully keep you inspired to keep this alive we need more sound mods for world environment. i also use macho man voices for the chaingunner guy. that fits perfectly with that. you could if you can find more predator voices from mortal kombat X. there is another one but i cant think it right now.
Top

Hello, thank you very much antpostal for your support.
I already worked on the modifications you requested but
but according to what you said, I understood you in 3 possible ways:

antpostal wrote: ↑Fri Oct 28, 2022 8:04 pm is it poosible to add sounds and more voices from a game called condemned criminal origins. thier voices and thier taunts are not only like crazy but funny and a bit over the top. i think they be great for this sound mod.

To quickly get GBA, PS2, PSP & PS1 voices or sound effects,
in many cases it is possible to import your sound data directly into Audacity,
MFAudio or PSound, but I don't know if there is such a thing on XBOX-360 or Nintendo Switch.

you have played this game several times,
is it possible to reduce the volume of the music,
sound effects and environment?

That would make capturing just "Voice sounds" a lot easier by leaving
that channel's volume all the way up
while the other channels are off or at least reduced to 20%.

In games like Black, God Hand and Area 51, it is not possible to do this, but there are always cinematics,
missions, rooms, bugs and glitches that allow you to capture sounds with less ambient noise,
punches, weapon hits or music. but to learn this, it is necessary to complete the game more than once
and unfortunately I am very short of time.


If I have not made a mistake in the game: (gameplay time 4:33)
the sounds of "condemned criminal origins" are Good,
but I would need your help to obtain their voices.
Top

I uploaded some videos of version 1.0


These are notable changes:
Top

I have released a new version [2.0] via Google Drive.

this was a rushed release so there may be sound issues.
feel free to report a problem or make any suggestions.

This version changes the following:
Top
7 posts • Page 1 of 1