MMDoom is a GZDoom monster replacer project porting Might & Magic monsters into GZDoom. Features include:
- 60 monsters separated into three factions according to M&M lore and specifically HoMM3 city lineups
- monsters are created using sprites and sounds from Might & Magic VI-VIII and Heroes 3 games
- compatibility with most WADs and gameplay mods for Doom, recommendations below
- monsters infight based on what "species" they belong to, with each faction having three
- Elements system: each monster is assigned an element determining its resistances and weaknesses
- Water > Fire; Fire > Earth; Earth > Air; Air > Water
- DamNums mod by Xaser included: your damage is shown in colored mumbers representing the elements

These options are present in the menu:
1. Random Faction (default) - random faction is chosen each time the map loads
2. Dark - an army of Necropolis, Dungeon and Inferno units
3. Order - an army of Castle, Tower and Rampart units
4. Chaos - an army of Fortress, Stronghold and Cove units
5. All Monsters - all monsters are mixed together

The best way to play MMDoom would be to load it w/ some kind of a fantasy-ish gameplay mod and a custom WAD (mappack) that fits fantasy theme. There is a lot of those created over long history of Doom. See the list of recommended mods at the end of this post.

Files included in archive:
- MMDoom.pk3 - main file
- MMDamNums.pk3 - Xaser's DamNums mod in included w/ a LANGUAGE file for MMDoom
- MMDamNums_WoC.pk3 - use this instead of previous file if you play w/ Wrath of Cronos mod 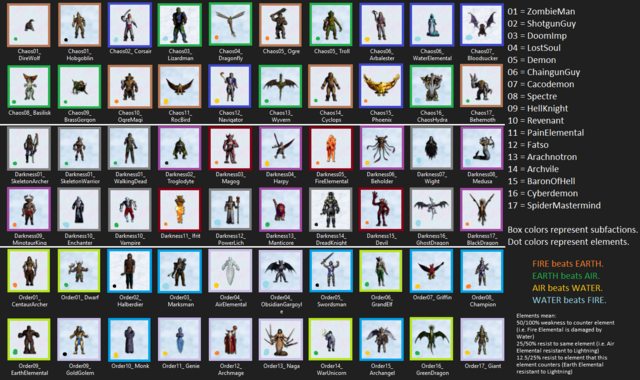 - development will continue, this is my first GZDoom mod, there is much to learn and a lot to do, I would appreciate your feedback!
- I want to do additional UI FX for elements, auras, Heretic/Hexen/certain WADs support, more spells/projectiles, death/pain vfx, etc.
- I like the idea of making level(s) using Might & Magic textures and props, or even a gameplay mod
- but will only attempt that if I get smb to help on the project, everything goes (spriting/scripting/mapping)

- New World Computing for Might & Magic and Heroes series
- GZDoom, it's devs and community for being so awesome
- Zan, author of Hedon, which heavily inspired me to turn my attention to GZDoom
- AlpacaNox, author of "MM7 in Doom" proof-of-concept project that served as a starting point for MMDoom
- EHARPER256, author of Walpurgis, the mod I personally play with MMDoom most of the time and which provided inspiration for some of the monster abilities
- Agent_Ash aka Jekyll Grim, a helper on GZDoom discord and author of ZScript guide, who answered all of my endless questions about ZScript

All sprites and sounds used in the mod were imported from Might & Magic and Heroes games and are such the property of Ubisoft, all rights reserved.
To see where they came from, check out the awesome Might & Magic VI-VIII games, best presented via the Merge mod that links all three game worlds.
I will never request any kind of payment or donation for MMDoom in any form, it is completely free for anyone.
However, I do not give permission to update and distribute the contents of the mod unless you want in on the project or would like to suggest a bugfix/feature to be included.


Spoiler:
Essentials:
DamNums - mandatory. allows to see damage numbers. MMDoom is designed to be played w/ DamNums, it is very important for the player to learn to use elements. Version with all the MM related changes is included in the archive. Credits for the mod itself go to Xaser, it's author.
NashGore - essential. blood & gore mod that is highly customizable. Alternative is Droplets (pretty and fits MM style very well imo), but I encountered serious performance bugs w/ it. Use it even if u don't like gore, turn the gore amount in settings down a lot instead.
Warning: make sure Flip Corpses is OFF.
Corruption Cards - optional. Every time a map starts you have to pick a card giving certain monster family an affix or changing some other aspect of gameplay. Cards are varied and well implemented, good for reruns / extra challenge / randomization. Great for long playthroughs of Wrath of Cronos when your char becomes so powerful you can literally melt hordes with ease.
Note: there are only 9 monster "species" in MMDoom, any card that affects "monster and it's species" will affect the whole family (i.e. "all Rampart monsters")

WADs:
Eviternity - 32 maps split into six episodes including everything from techbases to Hell and even Heaven. One of those "blockbuster" maps everyone should play.
Elementalism - 15 maps split in three episodes taking place on three elemental planes: Earth, Water and Fire. Latest "blockbuster" WAD showcasing stunning art and technology. I recommend picking one faction per Plane: Chaos for Earth, Order for Water and Dark for Fire.
Lost Civilization - 22 maps full of open spaces, lush greenery, old mansions and castles, plus an occasional nightmare trip. some modern machinery and electronics exist on levels but they are not disruptive especially given the nature of M&M lore.
Ancient Aliens - 32 maps featuring stunning levels ranging from pyramids to literal skies. following best Might & Magic tradition, this WAD has a sci-fi twist.
Avactor (recommended!), ElysianCurse, TangerineNightmare, Epic2, Sunlust, AzureShades, WaterSpirit, MorbidAutumn, VerdantCitadel, Scythe2 and many others...

While I can't offer any kind of assistance, I have to say, this looks terrific!
Top

It's a big project and I can tell you have passion and brought it a long way already. Two or three years ago, I might have joined the project if I had any connection to the M&M series. Nowadays, I don't have the time for this kind of stuff anymore

I do encourage you do keep working on this and learn to implement things yourself. You cna always count on the verteran modders to help you with any specific questions, here or on the Discord

I loved old Might and Magic 3. This seems like a fun idea and even semi up my own alley, but the associated mods are not my cup of tea, with the sole exception of Walpurgis.

Judging by your videos, you are ready for a beta release. Rather than waiting on a RC1 I would advise a beta release so that your fishing expedition here may be more fruitful in a larger pond.
Top

It'd be cool to branch into a gameplay mod (I have some class ideas for sure), or even maps, but at the rate I'm working rn (I'm pretty lazy) it would take me forever and a half. Also the stuff Wrath of Cronos does with their progression system and skills, and the stuff Walpurgis does with the spriting I can never beat alone, and I don't really want to.

It's true however, that I should just focus on releasing a beta, I guess. There is still a lot of polish I need to do with stats and properties, and a lot of projectile/attack polish, but I guess I can leave the difficult stuff like porting Heroes 3 spells for later stages... I really want that Minotaur to play "Morale" animation and sound from Heroes 3 for example, it would be such a meme, but I fail to even think of what the spell should actually DO in zdoom, etc, etc...
Top

UPD. I decided I can't release beta yet because there is just no gameplay, everything is too unbalanced and I am not happy with visuals either. I am doing way more design compared to implementation atm, for example recently I did all monster stats (health, painchances, movespeed, etc), sizes (both visual and hitbox), atm I am working on balancing monster aggressiveness levels (minmissilechance, +MISSILEMORE, length of chase frames in ticks, stuff like A_Refire, meleethreshold, maxtargetrange, etc, etc). Have also been making various tweaks and playing around with an idea of replacing more of vanilla Doom's props/sounds with MM ones for more immersion, like barrels, trees, elevator sounds, etc. But after some testing decided it was just not worthwhile, especially with a lot of wads/mods loving to introduce custom props by replacing the vanilla ones. Kept the barrels though!

There are still three major elephants in the room I am yet to tackle, that will probably take a lot of time - the zscript mechanism of choosing enemy faction via menu, zscript monster "spells" (like monster casting "Haste" and giving movespeed to all monsters in a certain radius) and general polish/variativity for monster projectiles, both in terms of aesthetics and mechanics.

Once I'm done with all the balancing I will try to deal with the first "elephant", then do "some" polishing of projectiles, then release beta, and the abilities will have to wait till after-beta probably. Actually, I already have a long list of things to do after beta -_-
Top

Thank you very much for beta release! <3
P.S.: Hm... Got softlocked on MAP07 in Plutonia.
Is +BOSSDEATH flag enabled for Mancubi replacer?
Top

RastaManGames wrote:Thank you very much for beta release! <3
P.S.: Hm... Got softlocked on MAP07 in Plutonia.
Is +BOSSDEATH flag enabled for Mancubi replacer?

Yep, Mancubi replacements doesn't have those. Assuming the RandomSpawner approach even works since spawners are picked via ZScript.
I recall putting it on other monsters, should've tested this, good catch. Will update the archive later.
Top

Are the spell weapons in the video part of this mod? If not, then what mod is that?
Top

This particular vid it's Schism. See the reccommended mods section of the OP post. Also video has mod list in description.
Top

Gave this a try and WOW it plays way better than I thought. I gave it a whirl with Doomed Over Zelda and it handled extremely well. Does this work with Heretic and Hexen?
Top

Not yet, but I make replacers for both later.
Top

Been playing this with Nameless using the "Dark" preset and it's really well done! Adds a lot of interesting gameplay changes and the graphics mix pretty well in my opinion! Good stuff