The Expansion to Abysm2: Infernal Contract is here!

The Prized possession of the leader of the Satsuma Clan, The Spirit Falcon, has been stolen by the Rival Yanagi Clan.
Nadia, Mercenary of Iron and Demon Slayer of Hadria, travels to the Kingdom of Kiyoshi and is tasked to recover the stolen heirloom so it may be returned to its rightful owner.
What dangers does the Yanagi territory hide?

Before Playing be sure you have the latest version of Abysm 2: Infernal Contract available HERE
also I recommend to not load this alongside other mods so that things don't break.

HOW TO RUN
• Spirit Falcon requires the Latest version Abysm 2: Infernal Contract and atleast GZDoom 4.2.4 or above to run.
• You will need to load the Expansion – Spirit Falcon.pk3 AFTER Abysm 2 - Infernal Contract.pk3, using a Launcher of your choice. • If it loads successfully you will see a New Green Title Screen with no Errors.

Feedback and Suggestion during the public Beta is highly encouraged and will help makes this a better product for final release. - New Starting Equipment, the Dragoon’s set and the Thief's Set. Before Playing be sure you have the latest version of Abysm 2: Infernal Contract available HERE
Dropbox
ModDB Once again, really brilliant job making the new expansion of Abysm! This expansion is nicely oriental and immersive. Enemies now do take advantages of each map so you'll have to act like a ninja, sense like a ninja and fight like a ninja. This is by far the challenging expansion i ever played. But in a good way!

Spoiler: IDMYPOS is on, and big Spoilers. 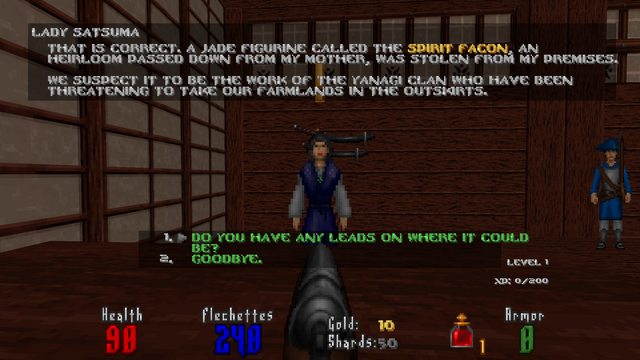 - A Typo. It should be Sprint Falcon, not Facon. 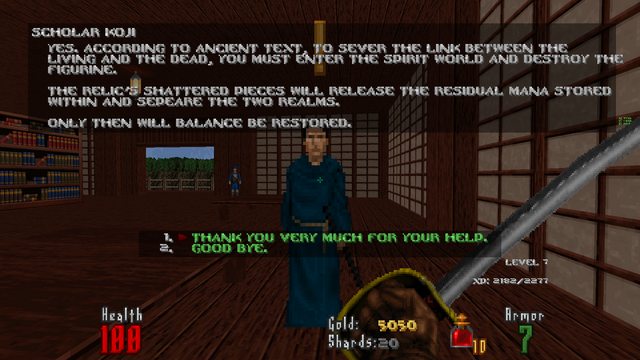 - Another Typo. Sepeare? Not sure if the word's real but i think it's Separate. 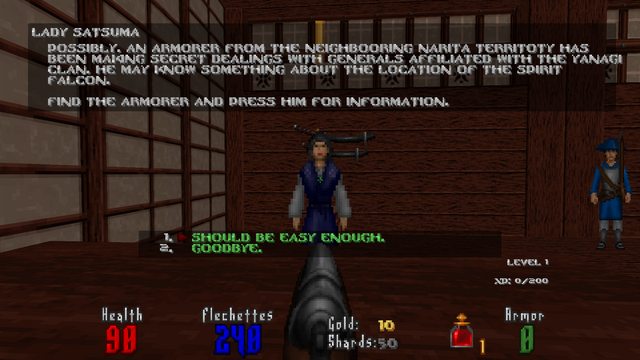 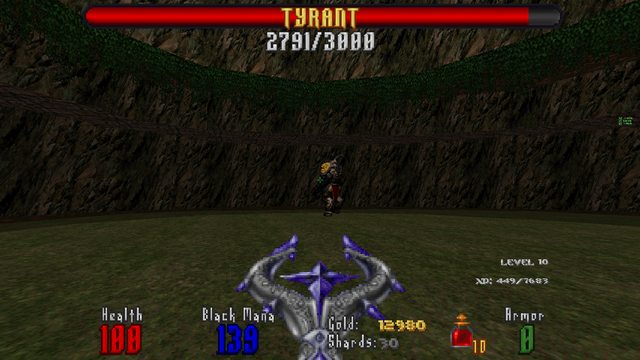 - This Dark Mana Staff seems does not alert the enemies. The first Goblin Horde at Yanagi's Castle didn't even notice me while using this weapon. 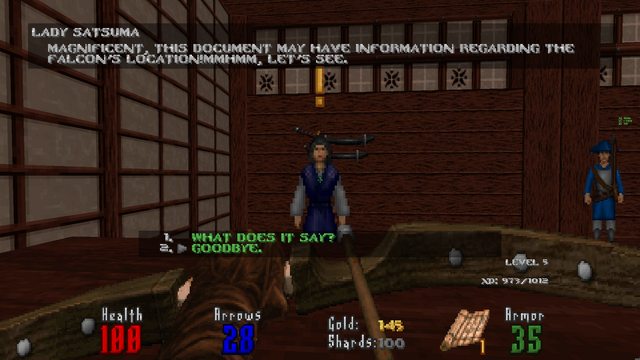 - I think this dialogue needs some space. 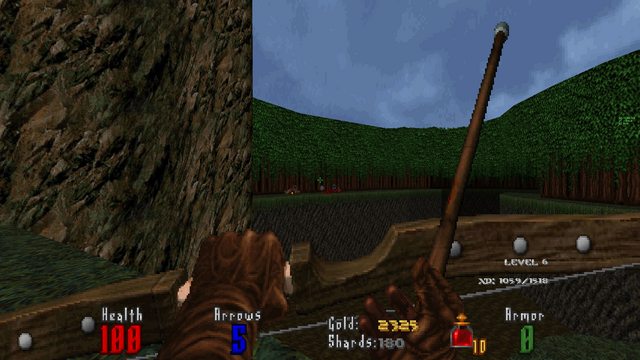 - No more Typos but i just noticed that the Bow launches arrow in wrong direction. I kept sniping the Marksmen with it but one of them refused to die for some reason. It turns out that arrows do not land on the crossshair. So he punctured my head clean after that haha 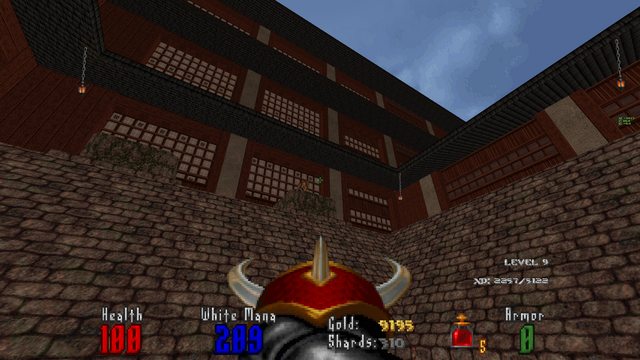 - At turret sections of Yanagi's Castle, Sentinels spawned in there in exact same spot for some reason. They don't attack or move unless i kill one of them. 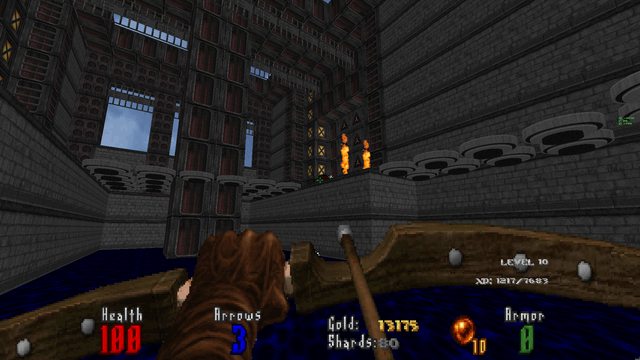 - Alright so... RoTT easter egg is something i never expected and i found it amazing!! Even the boss fight was so much fun to play through. One complain i have might be the baddies don't get burned to smithereens once they touch the fire.

- Also got the critical issue i think. If you start and continue the quest where you head to Yanagi's Castle without talking to Scholar Koji not even once, he'd give me the same quest all over again once you finish it and then talk to him. Haven't tested if it softlocks the game, but i presume it is.

Also holy smokes, Lee Jackson?? Good for you! It's amazing to hear that veteran composer like him contributed awesome musics for the expansion.
Top

Very impressive. Just getting into it but it's very good so far.

I get this spammed to the screen and console a lot: ACS: 'JPHUD_DontShowHealth': Unknown actor class. 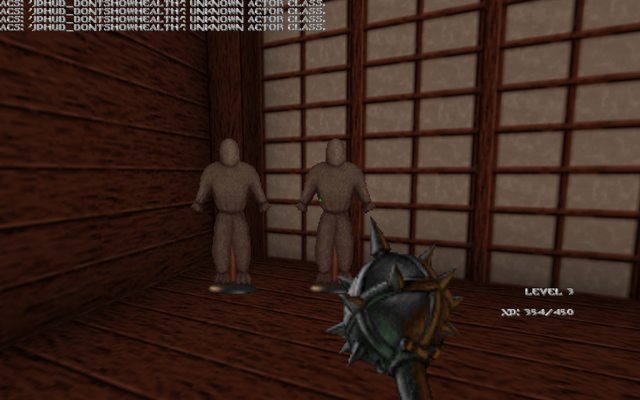 I've seen this too: Divide by zero in script "xp_gain"

I run with developer mode on 2, so that may be relevant.

Also, this sector is about 8 units higher than the surrounding floors buts doesn't have any lower side defs. So it looks a bit HOM-y. 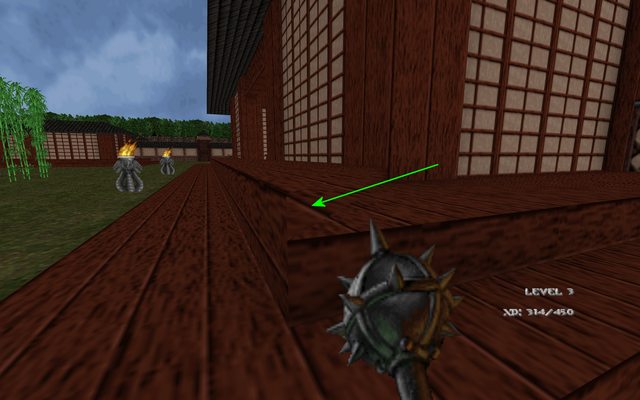 The effect is visible from both ends and from inside the building.

It actually looks like you went from 2D mode in DoomBuilder, to 3D mode and accidentally pressed whatever key or control (e.g. mousewheel) you have bound to "raise floor" by accident and didn't realise that you'd done it. At least, I've done that loads of times because Zoom in 2D mode and raise floor in 3D mode are both bound to mousewheel.
Top

Spoiler:
- Added new Frames of Animation for the Rise of the Triad Enemies for when they are hit by Fire damage

Update Uploaded:
- Fixed Death pit in the overworld that did not Do damage
- Fixed Iron Key Swit h in "Narita Castle" that did not correctly check for a key
- Fixed Tags for "berserker Growler" and "Spectral Goblin" to show their special tags

Yes this mod is still alive and Beta is still on going, Feedback and Suggestions are still welcome.

Here's an update on what's to come for the next update which was Posted on my Twitter page.

I liked the video and subscribed to the channel!

Just played through it, really enjoyed it - I didn't find all the secrets but I did find a fair few hidden levels

Spoiler:
RoTT one was very fun

- the penultimate level in the fortress was really great, made me very glad I put together the hive weapon.

Spoiler:
Final boss was also really cool, I felt the previous ones were a little bit anti-climactic but this one was much more interesting, both visually and gameplay wise

Level design is also solid, the vistas on display sometimes are really good.

The only issue I found was on the level with the bridge that you need to grab a key to open and cross; I could bypass the lock by walking along the sides of the building. Not a huge issue since the key's not very far away anyway.
Top

Stuck. Moved onto Quest 2, looking for Satsuki in the swamps, but he's not there. Only the sign, pressing on which asks if I want to travel to Satsuki and another map. Doing this does so, and brings the player to Satsuki, but when talking to him, the only options available are to travel back to the swamps or buy things from him. Bug?
Top

blakecasimir wrote:Stuck. Moved onto Quest 2, looking for Satsuki in the swamps, but he's not there. Only the sign, pressing on which asks if I want to travel to Satsuki and another map. Doing this does so, and brings the player to Satsuki, but when talking to him, the only options available are to travel back to the swamps or buy things from him. Bug?

Spoiler:
Satsuki is moved to the underwater river located deeper in Satsuma Swamps

Thanks for this awesome project!
I love it!

- New Track for the final boss, Composed by PRIMEVAL
- Added Torches in Gun Fort Ridge for better aesthetics and navigation
- Fixed the dialoged function for Bounties so that it doesn't close each time you claim a bounty
- Fixed Textures for Narita Estate
- Fixed Torches in Yanagi Castle's Gatehouse to block a potential camp spot
- More Typo Correction
Top
25 posts