Hello my ZDoom friends, just want to release Ray Mohawk 2 here - I think you'll have fun with it! 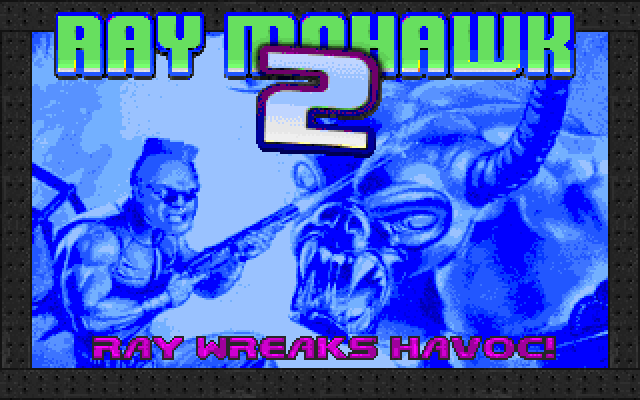 Ray is BACK and ready for more vanilla-compatible action in the tropics!


THE STORY SO FAR:

A year has passed since Ray successfully destroyed the UAC and several of their Nukage™ production compounds. Soon after Ray completed his mission, the prestigious General Kawasaki, one of the last surviving military leaders on Earth, sought him out and rewarded him with a Medal of Courage for his heroic effort.

As a result of the devastating effects of Nukage™ around the world, about 80% of humanity has either died or become completely zombified. The remaining population has banded together in an effort to reclaim their cities and hopefully start to rebuild once the remaining bloodthirsty mutants and hellish creatures are wiped out. Maybe the remainder of humanity will even learn a lesson about not abusing resources, if indeed they survive.

Under the auspices of General Kawasaki, Ray has been receiving high-level training with almost every kind of firearm known to man. Equipped with his new set of skills, he has become nothing less than a killing machine! No matter which weapon he uses, he can lay giant crowds of mutants to waste in a matter of seconds.

Ray's current and final assignment is to fight the remaining infected mutants and demonic invaders in his local area, a once-beautiful tropical region consisting of beaches, small towns and old historic ruins. Nukage™ took its toll on most of Ray's friends and family and changed them from people he loved into hideous monsters, so at this point he wants justice. All uninfected survivors have been evacuated to a safe zone in Japan, so he can now go in guns blazing to help prevent this wave of horror from spreading any further.

Ray misses his old life of surfing and drinking with his friends, but all the chaos he's been through has proven him to be as gifted a soldier as he is a surfer. Can you help him complete his mission and save what's left of humanity?

• Like in the first episode, the fists are replaced with Ray's trusty knife, which does 5 times the damage of Doomguy's fists per hit, and is more than twice as fast.

• The chainsaw is replaced with the gauntlets from Heretic, but super souped up. They're twice the speed of the normal saw, meaning they do twice the damage in total.

• The pistol deals 7 times more damage per shot than the vanilla pistol, making it one of the most beefy starter weapons you'll find in a Doom wad. It's faster as well!

• The shotgun is roughly 3 times tougher than it's unmodified counterpart, firing 20 pellets rather than 7 per blast. It takes two shells per shot rather than one, but it deals enough of a wallop to be worth it.

• The auto-shotgun replaces the SSG. It's an upgrade for the shotgun that makes it, well, automatic! When it comes to clearing a path through hellspawn, this weapon is like a hot knife through butter.

• The chaingun is replaced by a cool futuristic blaster. If you love the chaingun but have just been wishing for a version with about 7 times the killing power, this is the gun for you. (You also don't have to shoot it twice every time you fire.)

• The rocket launcher is replaced with a flamethrower! Those of you familiar with the Rowdy Rudy wads have probably been wanting to use that sweet flamethrower after being on the receiving end, and now you can! To put this beast's power into perspective, each flame does 3 times as much damage as a standard plasma ball. The only minor drawback is that it has a somewhat limited range of about 900 pixels.

• The plasma rifle is replaced with the cell cannon. It fires explosive plasma balls very rapidly that are this mod's equivalent of rockets, but since it uses cell ammo, your maximum ammo is much higher, meaning you can blow away a whole lot more baddies.

• The BFG9000 has been upgraded to the BFG9002 (Nine-thousand and two). It only needs 25 cells to produce a blast that took 40 for the old BFG, it emits two waves of tracers rather than just one, and it fires much faster. This gun's killing power is simply off the charts, so naturally it only comes into play later in the set.

Most of the enemies are only changed visually, having a bit more of a beachy, sunshiney feel.
The only substantive changes are as follows:

• Commander Keen is now replaced by an actual enemy - Slyor, who has a cannon that shoots a volley of flames followed by 3 imp fireballs in quick succession. He has 250 health points (half the strength of a Hell Knight).

• I gave the Wolfenstein SS soldiers a new look lifted from Kick Attack!, making them viable fodder in between a shotgunner a chaingunner.

• Finally, the Cyberdemon has been modified to fire in volleys of 6 rather than 3, just to make him a touch deadlier than usual. It's only fair considering the player's firepower! I bleached him to help signify that he's not your typical Cybie.

This wad lovingly borrows assets from numerous other beautiful content creators. They are as follows:
• The texture pack comes from the latest version of FreeDoom.
• The sprite of Ray's HUD face originally comes from PunkDoom by CiderMan, which was touched up by me with the added shades from BRIT11.wad.
• The Pistol, Shotgun and Auto-Shotgun sprites were taken from Immoral Conduct by Cory Whittle, auto-sg modded by Noiser.
• The Knife sprite was created by aeea7835.
• The Gauntlets were taken from Heretic and modified by me.
• The Blaster comes from Dark Forces, but I'm using a further modified version from BLUDBATH.wad.
• The Flamethrower and BFG9002 sprites come from Obituary by The Innocent Crew.
• The Cell Cannon comes from Dark Forces, but I'm using a further modified version from 2DMMAPS.wad.
• The Hula Imps were created by Seth Stanton and Joe Seifert.
• The Shades Zombieman was created by Paul and modified by me.
• Slyor comes from the default Skulltag skins.
• The WolfSS sprite comes from Kick Attack!.
• Some random props and decor come from FISTFUL3.wad, VACAV15.wad and Alpha Doom.

Everything else was done by yours truly!

I want to give a big thank you to the following for help with testing and other bits and pieces:
Azure_Horror, rd, Noiser (for many things!), Scypek2, Gez, Lol 6, DGA, FrancisT218, Sloth Marine, SilverMiner, Peccatum Mihzamiz (BIG time), and everyone else who tested, posted in the thread, or helped with development in any way at all. Thank you so much!

I'm glad I could contribute to another one of your fascinating and really fun projects!

The maps and the arsenal provided is really a unique spin. I feel the Freedoom textures made everything familiar yet different which I think worked really well for this project.
Plus the Beach setting was really nice!

But most of all I absolutely adore the weapon roster here, It's so enjoyable blowing away hordes of monsters using just the puny pistol. Awesome stuff!
I'd be surprised if this doesn't win a Cacoward.
Top

The Dehacked work on this must have been intense! I'm really impressed by what you did to make the new weaponry.
Top

Thanks a lot, Voltcom and AshatMaself! The final version of this, with all the bugs crushed, is now ready - https://doomshack.org/uploads/mohawks2.zip
Top

How do i remove the monsters and weapons from this wad in slade without getting the missing elements? I would like help on valliniflying this wad.
You do not have the required permissions to view the files attached to this post.
Top

Love this mapset, halfway through playing on coop and having a great time.
Top

could someone DM me a No Weapons No Monster version please?
Top
9 posts • Page 1 of 1