What's Raze?
Raze is a new source port by Graf Zahl and a few of the other GZDoom usual suspects that takes eDuke32 and several forks created to support other BUILD engine games under one roof with a number of tweaks and changes to taste.

What Are The New Features So Far? What Games Are Supported? What Games Aren't Supported Quite Yet But Are Vaguely Playable In Some Weird And/Or Buggy Form? Where's Witchaven and Tekwar?
In hell, where they belong. No, but seriously, the source code releases for those games are legally troublesome on account of being uploaded by a former programmer without any approval from the (long-defunct) rights holder or proper code license, so we can't really touch it. Sorry. BuildGDX is working on those games, you should totally check it out if you're not allergic to Java. (You might be! I wouldn't blame you.)

Where's Multiplayer?
Multiplayer is a pretty big ask, since separate netcode would need to be written for each included game. It might happen if some brave knight swoops in, sweeps the engine off its metaphorical feet and rides off into the sunset... but for now whatever netcode is there is as-is.

Are There Any New Modding Features?
Not yet. Graf's been focusing on focusing on the playability of the games as they currently stand. Some kind of additional mapping or modding functionality will come further down the line.

So, Uh, Where Can I Get It?
The source code is here. Official builds can be found here for now.

Something In This FAQ Is Wrong!
Yell at me or a moderator who knows more about this.
Last edited by Kinsie on Sun Apr 19, 2020 5:11 am, edited 8 times in total.
Top

Would this mean that eDuke32 mods (my case in example, Duke Plus) would work under Raze?
Top

Hellser wrote:Would this mean that eDuke32 mods (my case in example, Duke Plus) would work under Raze? 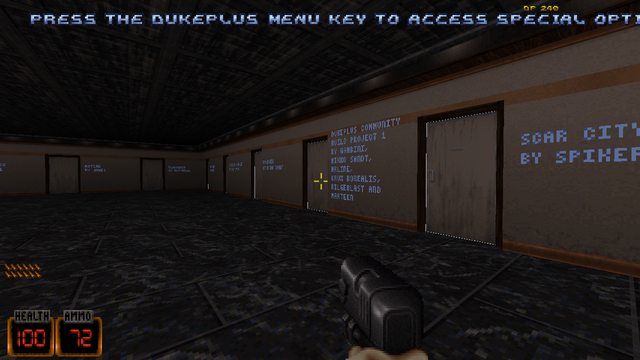 I was able to cram it into a PK3 with only minor tweaks (removing the "dukeplus" from the CON paths) but it's not 100% perfect just yet - 3D models don't seem to render, some of the new sounds don't seem to play (this seems to effect a lot of mods at the moment) and the modified key binds don't have their names changed.
Top

Yeah, models are not working at the moment, this was also mentioned about the HRP. Besides this issue with models, most EDuke32 mods should work, but it's inevitable that some will be broken. Vanilla-compatible stuff should just work, though.
Top

It's also worth noting that a number of mods are built with very specific older versions of eDuke32 in mind (that are usually packaged with the mod) and may act up in the version that Raze is using. Not a whole lot Graf can do about that, sadly.
Top

Understandable. I'm looking forward to using this, then.

That screenshot was taken in Raze, so it runs... if there's some hardcore gameplay bugs though, I didn't really play it enough to check due to the lack of 3D models.
Top

That screenshot was taken in Raze, so it runs... if there's some hardcore gameplay bugs though, I didn't really play it enough to check due to the lack of 3D models.


Trooper Dan wrote: Welcome back! Unfortunately I have developed a serious mental hangup about maintaining DukePlus and haven't touched it in years, even though I have worked on other EDuke32 projects. I have seen the messed up shadows in Polymost when working on Duke Forces, so I know it's a general problem and isn't DukePlus related. With the shell casings...the CON code never changed for them and it used to work (that part you posted is only part of it). I am guessing that what used to be an idle tile number in the HRP has a spinning animation defined on it now, and that is what causes the problem.

tl;dr: It was already outdated year ago and needed update but Trooper Dan just busy on his other projects and leave DP behind.

It is unlikely that such mods outright break. They will mostly exhibit playability errors. My guess is that the most likely culprit is the reworked movement clipping code.
Top

Kinsie wrote:It's also worth noting that a number of mods are built with very specific older versions of eDuke32 in mind (that are usually packaged with the mod) and may act up in the version that Raze is using. Not a whole lot Graf can do about that, sadly.

Pretty much this. EDuke32 itself constantly broke compatibility with various mods between versions, a part of them being affected by the reworked movement clipping code.

As a general rule, mods should work in Raze if they work in EDuke32, same could apply to NBlood, unless they rely on very specific versions and their features/quirks, particularly those of EDuke32 - if the mod ships with an old build, it is wise to stick to that one when playing, or if some shenanigans that aren't currently supported are at play. But it needs to be stressed that the focus, as of right now, is on making the games working as well as they possibly could, after that, mods and more potential features will come into focus.
Last edited by sinisterseed on Tue Feb 04, 2020 1:57 pm, edited 3 times in total.
Top

If there is a reasonable chance to get such mods working, I'll definitely try. THAT*S really worth something.

Some big TC's worth testing:
- AMC TC
- Imagination World 1 and 2 (The latter had an updated exe to modern systems)
- Everything from the TC list here: https://msdn.duke4.net/tcrev.php
Top

I'm quite sure that some of these won't work, but getting some feedback on AMC would really be great.
Top
55 posts