Re: WAR TROPHIES (1.11) Give up your soul for extra points

Re: WAR TROPHIES (1.11) Give up your soul for extra points

Before using 1.6.0, or higher, make a backup of your config if you have played with a previous version of the mod.

If any progress loss is observed after loading the mod, restore the old config and open it, then:

• Look for any duplicate entries in wt_stats_weapons_kills. To find the class name of the affected weapon(s), type chat_substitution true in the console, then type "$weapon" in the chat while holding the affected weapon. Once you figure that out, remove the extraneous classes from the config, save, and reload. Everything should be working fine once that is done.


For a detailed overview of WarTrophies' interface, please check the picture below. 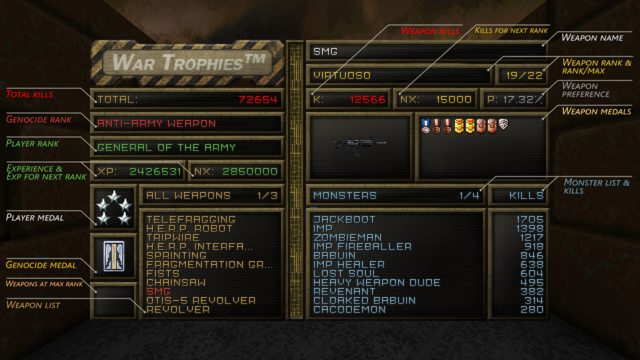 WarTrophies is a lightweight, high-compatibility mod that aims to provide stat tracking on your weapons.
Designed by yours truly and developed by Accensus, this mod aims to provide the original FragTrak experience with any weapon, any monster.

In order to set up your tracker properly, please make sure to open the War Trophy settings menu in your options menu, and bind a key to display the interface.


War Trophies offers features such as:

• A HUD widget that can display player stats, weapon stats, or both. Customizable with toggle-able displays and over a hundred colors!

• A search function to help find weapons in large lists.

• Option for Automatic IWAD and Mod filtering: only weapons that are present with the current resources will be displayed.

• A "Folder" system which groups batches of weapon together as one for the Lite HUD, useful for mods with lots and lots of weapons or variants of a single one!

• Tons of color options for your HUD!

• Different skins and fonts choices to suit your favorite aesthetics!

Differences from the original FragTrak 4.0+ device are:

• Rebalanced XP (score based on skill and enemy health) and Genocide rank (total kills across all playthroughs) thresholds.

• There is no general "prestige/rank level".

• Genocide ranks have icons to track your progress.

Due to the way data is stored, stats are not carried over across IWADS. As a result, it is strongly recommended to use JPL's WadSmoosh and use Doom_Complete as an IWAD.

• All of War Trophies' data is stored in the form of a large JSON chunk, inside a CVar container. As a result, resetting your configuration file or modifying this JSON block will corrupt or outright erase your progress. Make sure to do regular backups.

• If INI bloat or VM saturation is a worry, please relax as extensive testing has shown that INI files do not exceed 100kb even with over 100 thousand characters of JSON data, and VM processing usually adds about a millisecond or two of processing time.

You may find the stable version of War Trophies HERE.
You may find the latest, unstable/beta versions of War Trophies HERE.
For all builds from BEFORE Halloween 2020, GZDoom version 4.3.3 or newer is REQUIRED.
For all builds from October 31, 2020 onwards, GZDoom version 4.5 or newer is REQUIRED.
Read the manual!
If you load WT from a folder and overwrite it regularly; is recommended to completely delete it before an update to avoid file mismatches.

Please report all bugs here or on the bug tracker in the Git page provided above, or join the Discord Server!
Last edited by Tapwave on Sun Nov 13, 2022 3:43 am, edited 46 times in total.
Top

I think i'll check it out once i get home today.
Top

what happens if im using pistol starts?will it reset
Top

You should be fine. Information is stored in CVars, which carry across saves (and therefore pistol starting with idclev)
Top

This is the sub mod i've ALWAYS wanted for GZDoom. It's stuck in my autoload. Too bad it needs latest GZDoom builds (my notebook is kinda old), but it's worth the effort.

Also, bleepers is from Sega Genesis/Mega Drive Mortal Kombat, i just can't remember which of them. Lovely.

p.s.: Strange enough, when testing with my Aracnocide Weapons mod, you need to kill somebody at least once for the weapon to display in the "gun pokedex", otherwise it may randomly display other sprites.

This is really cool, but how does it react around DeHackEd monsters and weapons?
Top

Dr_Cosmobyte wrote: p.s.: Strange enough, when testing with my Aracnocide Weapons mod, you need to kill somebody at least once for the weapon to display in the "gun pokedex"
EDIT: Tested all my mods and it seems to be deafult behaviour.


, otherwise it may randomly display other sprites.

VERY MUCH NOT INTENDED THOUGH
It has been filed as an issue on the tracker, we'll try to see what causes that. If your scorecard is empty, it shouldn't display anything.


This is really cool, but how does it react around DeHackEd monsters and weapons?

It's based on the actor that is killed, so if you say, kill the enemies in Ancient Aliens, that are all based on corpses (and thus don't count as monsters or even are flagged as such normally), it shouldn't count.
Top

It doesn't seem to track kills with rail weapons at all. I'm gonna double check with another mod, but yeah.

E: Yeah it doesn't track rail kills. It doesn't track kills with a lot of the weapons in HoD -BARON either, but that's probably something fucked on my end.
Top

hobomaster22's Doom Launcher doesn't like it as a ZIP. Simply converting it to a PK3 makes it run fine.
Top

Another obvious thing, which isn't a bug, but rather a warning to players: quick grenade and quick melee commands in weapons won't count kills for the grenade or melee weapons themselves (when they exist), but rather the weapon the player is wielding (at least i believe so; needs testing).
Top

Dr_Cosmobyte wrote:Another obvious thing, which isn't a bug, but rather a warning to players: quick grenade and quick melee commands in weapons won't count kills for the grenade or melee weapons themselves (when they exist), but rather the weapon the player is wielding (at least i believe so; needs testing).

That'd make sense, considering your projectile is attached to your gun, not the grenade/melee weapon itself. You'd need to switch to said weapon somehow, then switch back, which would be inconvenient.
About your "random sprites" issue, did you turn on Filter by IWAD, by any chance?
Top

what can i say.... how in the world am i supposed to run this.. its only a zip file and it wont work... can someone help me?
Top

BoneofMalkav
Posts: 78
Joined: Thu May 22, 2014 6:04 am
Graphics Processor: nVidia with Vulkan support
Location: It's Never Worth The Risk

theroguemonk wrote:what can i say.... how in the world am i supposed to run this.. its only a zip file and it wont work... can someone help me?

rename the zip extention to PK3. Or if you use ZDL it can load zip files like PK3 files.
Top

theroguemonk wrote:what can i say.... how in the world am i supposed to run this.. its only a zip file and it wont work... can someone help me?

You probably just downloaded a zip from the GIT, which contains a folder which THEN contains the PK3 filestructure, which won't work. I recommend you extract it to a folder, and load the folder itself into GZDoom.

Remember to read the manual!
Top

if a level does not end immediately(like elevators with voodoo dolls or something else)and u enabled wartrophies menu u will get stuck on stats screen,cant press anything
Top
137 posts