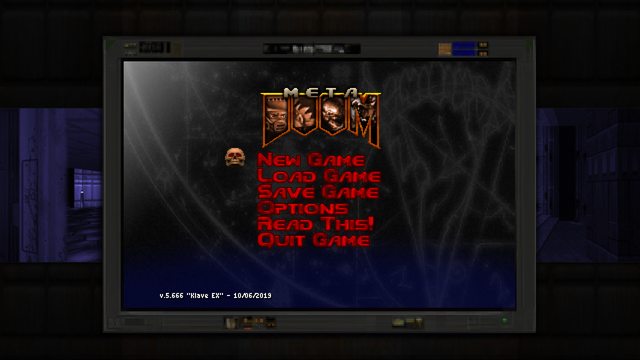 MetaDoom is a weapon/monster randomizer with a twist: smart progression. Instead of throwing everything on the player's head from the start, MetaDoom gradually unfolds itself, keeping the consistent flow of surprises.

If you are impatient, though, look for the “Intelligent Spawn Options” switch in MetaDoom options and select “Content Locust” there. It turns off the smart progression and gives enemy and weapon variants a chance to spawn right from the start.

There are eight inventory item types for dealing with enemies in tactical ways and to defend yourself. The item amount counter is shared between all item types, so beware. You spend one item, the counter for other items goes down too. You can carry up to 25 items. These items have a chance to spawn alongside other pickups. More stuff!

This amount of tools results in many ways of killing enemies. Where else can you use a demonic dog as a weapon? 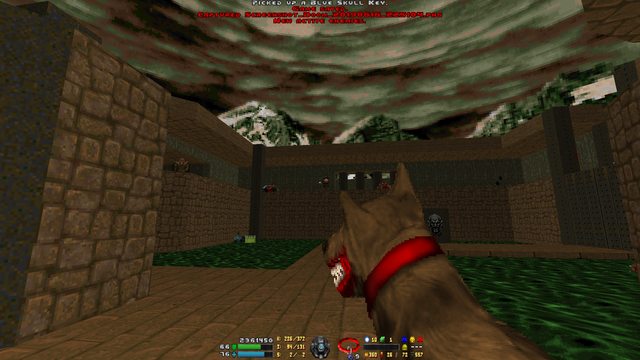 - EMG Sidearm - what a neat tool! It carries an unlimited supply of ammo, and also has a flashlight. Everything 's better with a flashlight.

- Chaingun's alternate fire turns you into a stationary turret. You cannot move, but it's not a problem at all considering the firepower you get. 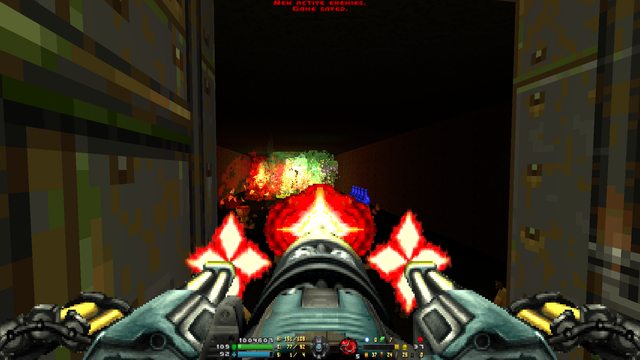 - Lightning Gun's alternate fire stuns enemies, so you can take your time deciding what to do next.

- Soul Cube - the mysterious artifact with probably deep history of occult research and development, created by long-gone aliens. Maybe the origins of Soul Cube will be revealed to mortals someday, but for now, two things are certain about it: it hits hard, and it makes enemies burst into health, armor, and ammo pickups. It is powered by exactly ten soul orbs, and note that you cannot carry more than ten soul orbs.

- Kinetic mines: probably the safest way of killing. Throw it on the floor, or on a wall, or on a ceiling, and it knows what to do. If no unlucky monster walks by it for a period of time, a kinetic mine will detach itself from the surface and will wait to be picked up again.

Blur Sphere is replaced with Haste Sphere. Berserk has a chance of being replaced with Quad Damage. Berserk itself changed: it lasts only a limited amount of time, unlike its vanilla counterpart, but monsters drop health on hit. Other powerups remain effectively the same but look fancier.

MetaDoom is not a power fantasy mod. New monsters know new tricks. Don't expect them to play fair. Each monster type is different from the others in movement behavior and/or attacks.

- Imp Lord - teleporting around makes fighting these fellows much trickier than ordinary imps.

- Former Assassin (Chaingunner variant) can pull you closer to perforate you with the chaingun more effectively.

- Dogs which are enemies unless you have suitable equipment (hint: a certain inventory item).

- Cyber-Mancubus: harmless at long distances, but devastating when it's close to you, even after death.

- Hell Knights and Barons of hell that are not big imps anymore, but know how to jump. Sometimes this leads to nobles leaving their designated places on the map, making the combat less predictable. 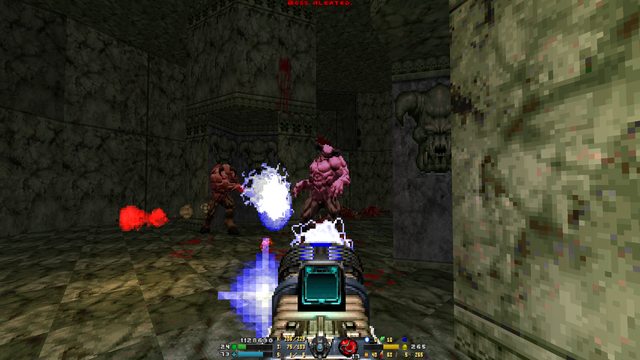 - Summoner. Oh, this Arch-Vile variant. Do you hate Arch-Viles? Prepare to hate it twice as much! It not only resurrects fallen monsters but also summons new ones. And it teleports around, so killing it may be tricky. Better have big guns ready. 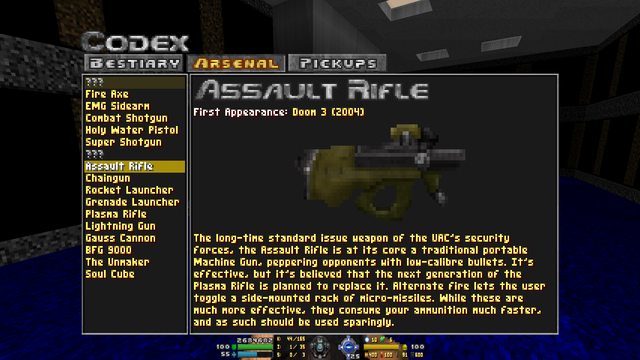 Codex is an in-game description of monsters, weapons, and pickups. Make sure you bind the key to open it!

The entries reveal themselves one by one when you encounter new monsters or find new items, giving the satisfying feeling of progression. The descriptions are fun to read and contain references to Doom lore and history. 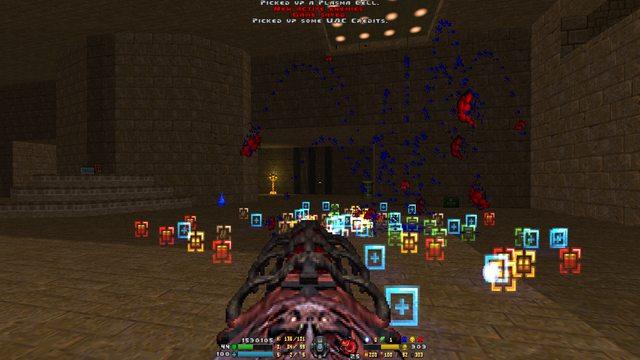 In general, with MetaDoom arsenal you can survive even in the most unexpected fights, given you know how to utilize the inventory and weaponry.

Also, MetaDoom replaces Nightmare difficulty with respawn-less Nightmare and adds Ultra-Nightmare (hardcore/ironman mode) for those who seek an additional challenge. 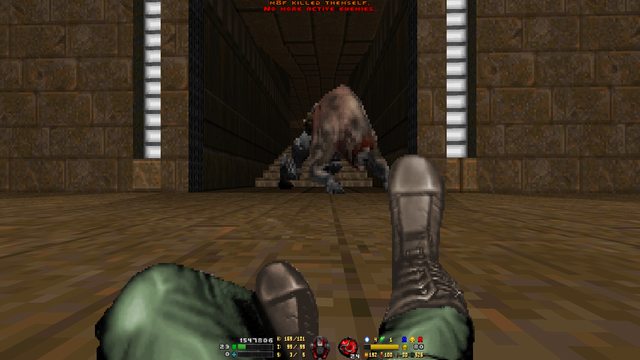 It also features a custom HUD and 100% completionist messages.

You can notice the big amount of attention to detail even not directly in a game: custom main menu, custom mod options menu with descriptive hints, selection of player genders to choose from, custom quit messages.

MetaDoom lets you play several Dooms at the same time, in one game. If every Doom game existed in the same universe, this is how it would look like.

This mod clearly received a lot of love from its creator, and it deserves a lot of love from the players too. It’s good both for replaying your well-known maps, because the new monsters’ behavior creates new battle situations, and for visiting new ones because you still understand where is what and how the map is supposed to be played.

Ahh, yes... MetaDoom. Probably one of my best and most-played Doom mod ever. Very creative, various, and does not like making the gameplay dull and repetitive. Few things i like about this mod is that Weapons, Enemies and even the Items are all from Official Doom Games and whatnot. It's almost like a Trail Mix full of Sweet stuff. Speaking of Weapons and Enemies, most of them has own unique Secondary Attack that would make the Gameplay a lot different with just a bit of it. And the minor details like enemies dropping ammo when gibbed, Optional Dictionary that you can turn on and see what you have or encountered is really useful and impressive. It's detailed overall.

Captain J wrote: Kinsie is absolutely a Talented Wizard of Doom. First, Re-doom, then REELism, and now this!

Yeah definitely a favorite. Kinsie is an amazingly talented modder. Putting together MetaDoom's custom sounds as a separate addon was pretty cool on your part, by the way, what's Re-Doom? I recognize Reelism, really difficult and fun mod (Dog Pope lol), but can't recall that one.
Top

IIRC, it was a "cosmetic enhancement" mod with some small gameplay elements like allowing projectiles to use teleporters.
Top

Oh yeah, that. I was positively shocked that the mod had enhanced special effects and clean quality sound effects. I loved the random gib sounds.
Top