Shadow of the Wool Ball and Rise of the Wool Ball are a pair of total conversions released in 2016 and 2017 by MSPaintR0cks, also known as WatchDaToast. Far from the usual rip-tear-explode-demons setting that we know and love from Doom, they instead take place in a peaceful anthropomorphic world that has been invaded by nazi cats from outer space, who are enslaving the population and planning to mine the planet to restock their supply of cat litter. The two WADs were both mentioned as runners-up in the Cacowards of their respective years, and are great examples of building entire new games in the GZDoom engine.

In the first adventure “Shadow of the Wool Ball”, you take the role of Scott, an unassuming hedgehog in a little tie who has been captured by the fascist invaders while attempting to rescue his girlfriend Rebecca from their wool ball-shaped mothership. He’s forcefully thrown into a small cell, which fortunately turns out to have a woeful structural flaw in one of its walls. He takes the chance to escape the cell, gets his tiny hands on a big gun and then rampages through a series of feline bases to rescue Rebecca. 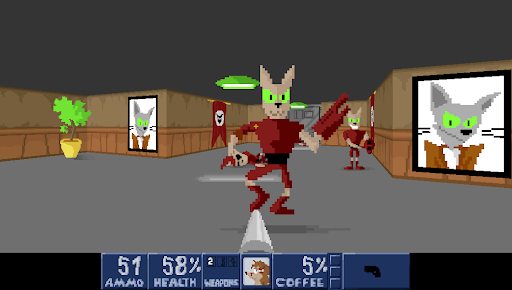 From the moment you start up the first game and see the animated title screen followed by the wonderfully stylized scripted introduction, you know that this is going to be something special. Despite its simple appearance on the surface, the world that you play through has an extraordinary personality to it - the game adopts a graphical style that I would broadly describe as “MS Paint except it’s good”, where the characters and environments take on a deliberately simple flat-shaded look. At first glance, this might make the game look underwhelming - the characters only average about eight frames of animation each, but when you see them in motion, you quickly get to appreciate just how much personality MSPaintR0cks crammed into that small collection of images.

Throughout the game you’re faced with a large number of types of bad-tempered kitties with a varied arsenal of weapons and appearances - from frenetic lower guards with pistols to hulking genetically-engineered Berserker abominations, or the deceptively fast flying saucer cats who are determined to kamikaze into you at all costs. Each one of them has their own set of voice samples when they notice you and attempt to hunt you down, delivered in a wonderfully cartoonish pitch-altered fashion that suits them perfectly. Occasionally, you’ll be accosted by the big boss of the cat invasion through monitors built in to the level walls, showing increasing fury that you’re surviving his carefully laid traps. 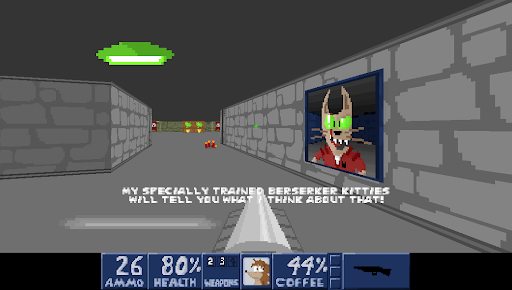 Like the graphics, the layout of the game stays deliberately simple - the angled walls and varied floor and ceiling heights of the Doom engine are eschewed here in favour of sticking to flat, grid-locked levels like Wolfenstein 3D. But just like the author of this review, the game knows it has to make up for what it lacks in the height department by being more interesting in other ways.

Most obviously, the familiar cycle of blasting through levels to reach the exit is given a refreshing twist - your objective in each level is to find the Shutdown switch placed conspicuously on a wall, which when activated will leave you just a window of just a few seconds to sprint to the emergency exit. This nod to Interplay’s Descent makes finishing a level much more interesting, as you have to plan your escape route - helpful emergency lights will guide you to the door once the switch is pulled, but it’s up to you to make sure that you won’t be blocked by enemies or locked doors on your way out. Once you reach the exit, the camera swings around to show Scott outrunning a series of fiery explosions as the level blows up - a very satisfying conclusion that I never got tired of. 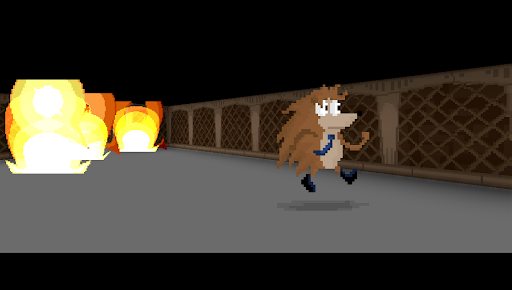 The levels are peppered with other obstacles as well that break up the usual strafing and shooting - enemies can take you by surprise by bursting through doors and even some walls. You’ll encounter large fans on the walls that blow you forcefully away from them, often straight into deadly spikes, and during levels on the cat mothership you have to take care to avoid slipping out into space because you deactivated a forcefield.

If you look closely around the levels, you’ll discover some walls are destructible and conceal secrets in the best of FPS traditions. In another Descent similarity, the secret rooms also occasionally house chained-up hostages - when freed, they’ll reward you with bullets for your golden shotgun, which is a powerful weapon that you’ll certainly want to keep in your back pocket for encounters with larger enemies and bosses. As for the other weapons available, they’re fairly standard - you have a punch, a pistol, a shotgun, a minigun, and that’s all. In a small annoyance, the golden shotgun is bound to the same key as the regular one like the shotguns from Doom, even though there would easily be enough room to give it a key of its own.

The levels tend towards short and sweet, with a couple of dozen enemies generally being the maximum population. The same could be said of the game itself, with just fifteen maps (plus three secret ones) - which might seem a little short, but really it’s the perfect length not to outstay its welcome. 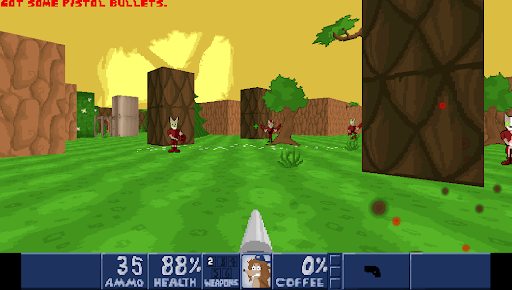 The sequel Rise of the Wool Ball was released the next year, and adopts the same formula as the first game but builds on it in new ways. As the title might suggest, this time the level design is inspired by Rise of the Triad, literally adding a new dimension to the game - the levels are still boxy and fixed-height but can be multiple storeys high. To let you use this new axis, this sequel provides platforms or stairs of floating objects, ladders, and a collection of bouncy mushrooms that can comically but painfully smack you into the ceiling. On the weapons front, the golden shotgun is no more, but in the late game you’ll find a launcher that shoots explosive cucumbers and a “bird cannon” that, er, explosively excretes a stream of deadly white blobs as long as you keep it topped up with bird seed. Both of these are very useful against the expanded army that you’re facing.

Most of the enemies from the previous game make a return here, along with some new ones such as a bomber cat that utilizes the increased height of the levels, and an army of iron-pumping gym-bro cats called Cute Nukems that throw their weights at you and finish you off with twin miniguns. You’ll also have to deal with more physical obstacles like giant spiked wool balls that roll along paths and are very eager to run you over - and one of the best moments is when you enter a waste disposal room only to realize that it’s rapidly filling with cat litter and have to run to avoid being crushed! 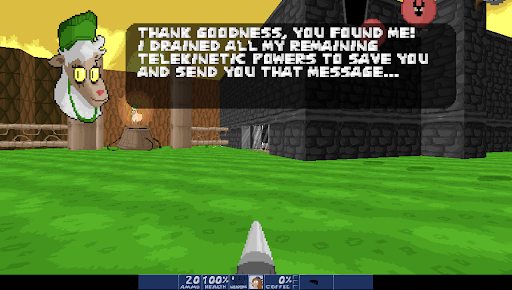 The presentation really moves up another notch in this game as well, with a between-level map screen and dialogue with an expanded cast of characters within levels. I really can’t overstate how charming the game and its characters are - MSPaintR0cks’ ability with cinematics really shines here, with a set of wonderfully animated cutscenes telling the unfolding story between maps. Just like in the first game, the end of each episode is guarded by a boss, climaxing with a truly spectacular fight to get rid of the master cat once and for all.

The Wool Ball games really are fantastic fun and exude personality - even though I meant to just start them up quickly to refresh my memory for this review I ended up playing them all the way through again. MSPaintR0cks used GZDoom to make a pair of games that aren’t simply reskins or derivatives of Wolfenstein 3D, but that blend a lot of the best parts of the Doom clones of the 90s shareware era and have their own unique charm. 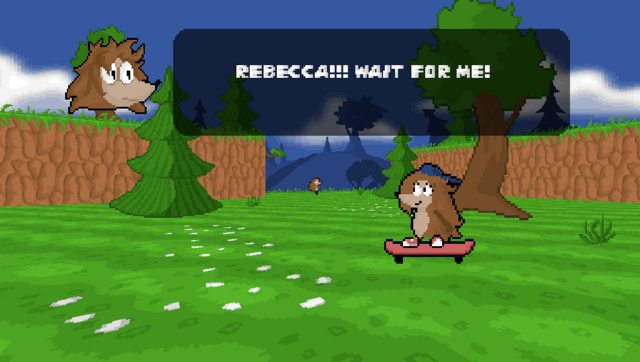 MSPaintR0cks is certainly good at making beautiful pixel graphics and cute characters with only MS Paint. I do make stuff with such Program for many years, but gotta be honest, he totally takes the cake! Such Bright and Cartoony Style definitely lightens up the mood and make the Gameplay a lot exciting. However the Weapons of Shadow of the Wool Ball are not quite great and various. It has Golden Shotgun, but it's just Recolored Gold, Increased the Damage... And that's just all. BUT he made a wise choice adding some New and Effective Weapons in Sequel, The Rise of the Wool Ball! My Favorite is the Bird Gun. Unconventional, yet Powerful. Also Cinematics in Rise of the Wool Ball are very nice, smooth and flawless. I don't even know how he managed to make all this! I'm impressed really.

Anyway nice to see some of my old Explosion Sprites! He liked them and added them to the Game. Both Series! That was very grateful.

Right now He's working on some Adventure Game and looks very promising. You should check out his Tweets!
Top
2 posts • Page 1 of 1