Fangames honestly don’t have the greatest of reputations throughout any of the game-making communities that I’ve been part of. Often, they’re made by overambitious beginners as their first project, haphazardly slapping graphics and sound together in a representation of the original work that could be described as crude at best. (I know that’s what all mine were like.) On the other hand, there are also the rare gems of fangames thought up by really dedicated people which show true love for the source material and get everything just right while putting their own spin on to the gameplay and world. 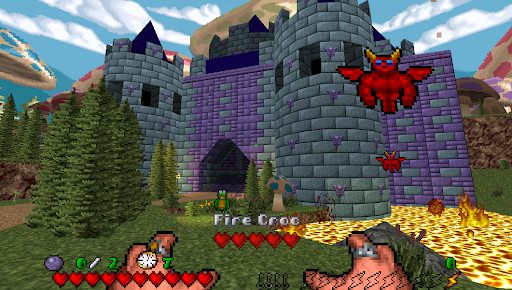 Hocus Pocus Doom is a shining example of the second kind. It’s based on the 1994 game Hocus Pocus, one of several thousand side-scrolling platformers published by Apogee Software during the golden age of PC shareware. The original game is the story of a young apprentice wizard who is tasked with retrieving a vast number of magic crystals from hostile castles in order to drain them of their powers, thus earning his place on the Council of Wizards and the respect of his tutor Terexin. This incarnation by Ravage and company sends you on the same quest again, this time translating the entire game to 3D within the confines of the GZDoom engine.

Each level sees you fighting your way through one of a number of charming Lego-brick castles with the aim of finding all the magic crystals. There are usually four to six of these on each level, and once you’ve grabbed the last one you’re instantly teleported off to the next map - as a result, the levels are all impressively nonlinear. Some of them have a fairly obvious progression to them, but others are entirely hub-based and let the player decide the order in which to complete the paths. Along the way you’ll have to deal with physical obstacles like lava, spikes and switch puzzles that alter the castle’s architecture, and you can zap the various magic creatures that get in your way with your little lightning bolt spell - the monsters are also imported from the original game and consist of a variety of crawling or hovering enemies that may or may not be able to fire back at you.

The game casts off most of the things that we’ve learned to take for granted in Doom and reworks them to suit the game that it’s based on. On your HUD, you’ll find the number of crystals that you’ve collected so far, the time you’ve taken to do it, and your current inventory of keys, health and magic. Unlike the health and random damage system that Doom players are familiar with, here you get a bar of exactly ten hearts (though it can be temporarily extended) and enemies will take off one of those with each hit. You have to be cautious, though, because you’ll encounter enemies that can take off more than one heart very quickly, meaning that your comfortable ten hit points are reduced to an actual maximum of five.

You start off with just one lightning bolt on your magic meter, though it can be extended to ten as well - each of these represents another shot before you have to wait for them to recharge, making it possible to fire faster as you collect more of them. You’ll also encounter potions in the levels that give you extra abilities temporarily, such as shots that explode and produce more shots on impact, or a stream of rapid fire - very useful for dealing with a suddenly-appearing horde of rabid penguins. 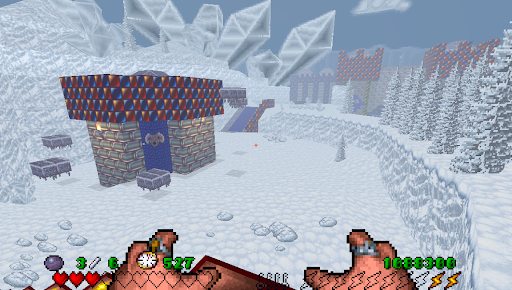 The familiar Doom level statistics are also replaced - a monster count still exists, but instead of the usual “items” tally for powerups, you’ll be judged on the number of treasures that you picked up in a level, and will net a large bonus if you manage to recover all the various crowns, goblets and other trinkets that have been left lying around. This number effectively represents the number of secrets that you’ve found in the level as well, as treasures can be hidden in out-of-the-way areas or behind breakable walls (which are cleverly created using shootable objects with models attached to them). Some areas use the Z-axis as part of the puzzle and have you carve out a ladder for yourself out of shootable bricks to get up to the treasures on a balcony above, which makes you feel extraordinarily clever the first time you succeed.

Throughout the game, the sheer level of attention to detail borders on psychotic. The environments of the original game are all present, with graphics faithfully adapted from the 2D version and reworked to produce three-dimensional levels that suit the first-person view perfectly while still evoking the feeling of the original. Even the parts of the game that you’d think wouldn’t really be necessary are meticulously recreated - treasures sparkle by spawning some shiny particles after they’ve been sitting around for a while, monsters burst into little bits of dust, every little effect that existed in the 1994 game can also be found in here. It would have been absolutely fine to have made a death sequence like Doom’s where you just keeled over and restarted the level, but instead the exploding player and interstitial summary screen from Hocus Pocus are thrown in for good measure.

The architecture, too, maintains an incredibly high standard throughout - the use of 3D floors, ramps and some models all come together to form an imposing array of corridors, towers and ramparts in every different style of level, with the blocky bricks of the castles blending in with angular outdoor environments. The levels are varied and have interesting characteristics per style that set them apart from each other - in fact, they’re often rather better than the original game’s levels, which had a habit of using very long repetitive corridors in many places. Look up at any point and you’ll see intricate patterns on the high vaulted ceilings stretching off well into the troposphere. Considering that this mod manages to keep this kind of standard up for forty levels, it’s a truly impressive feat. 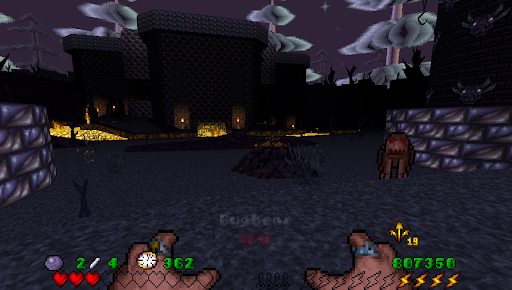 If this TC has any weaknesses to speak of, it’s really just as a result of its adherence to the source material - for example, it faithfully recreates the original game’s habit of having monsters materialize out of thin air when you’re already a bit too close for comfort, often resulting in a monster teleporting right into a player’s face leaving them no chance to prepare or pick them off tactically. Additionally, Hocus knows surprisingly few spells for a wizard (but then, that must be why he’s an apprentice) - having only one main weapon available can get a little dull, especially as you start every level with it downgraded back to its lowest level again and have to build it back up. The cumulative weapon upgrades don’t increase the power of your shots but just the number you can have in the air at one time, eventually making it possible to fire as fast as you physically can - and while I was okay hammering the fire button for hours on end in the 90s, these days it causes a bit of repetitive strain on my creaky old joints.

Otherwise, Hocus Pocus Doom is a truly amazing use of the GZDoom engine, and could easily be mistaken for a commercial release or an official remake. It requires an IWAD to run, but I honestly can’t think of anything that it uses from its Doom roots. Indeed, if Hocus Pocus Doom didn’t come as a pair of PK3s that you have to drag it on to your gzdoom.exe, you’d be hard pressed to notice that you were playing a Doom mod at all - the transformation is admirably complete, blending a wide variety of different features possible in the engine to produce something that feels very authentic. It’s a remarkably faithful translation of a classic platform game into a new form in which to enjoy it all over again.

Ahh, yes. Hocus Pocus on Doom! Never expected when this TC came out for the first time and thought it might not gonna work as the Original Game intended. So i played the TC and obviously i was wrong! It was really Retrospective and Unique experience, and the Environment of the Each Level were amazing, almost felt like i was in the doggone nice Game. Also i had fun finding some Secret places and Great Mage of the Magic Council himself. He was very rough and nice to the Protagonist at the same time. I loved his Personality. Puzzling and Complex Maps aside, Hocus Pocus is Good TC that gives you the Humble Focus!... Yeah, i tried.

I totally would like to see some more Doom-Styled Classic Video Game TCs like this one!
Top

I will check this out!!
Top

Just pointing out that this is actually final now, and for all I can tell it's definitely Cacoward material. Hocus Pocus fan or not, you should check this out if you don't mind a bit of jump'n'run in your life. Frustration factor is low since you can always use quicksave to get you out of trouble.
Top
4 posts • Page 1 of 1