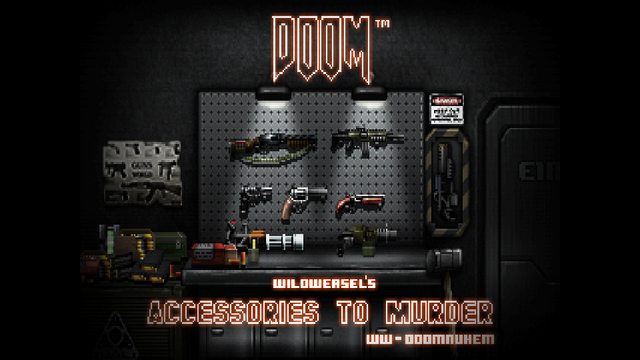 The weapons are the centerpiece of this mod. There are nine of them. They roughly conform to the standard Doom weapon formula, taking a bunch of liberties. These weapons are known as an example of how to make weapons feel right. The theme is futuristic, so Accessories to Murder probably go better with tech levels, but they won’t look out of place in the medieval setting, too.

Accessories to Murder are meant to be played with mouselook on.

The power balance is shifted in favor of the player, but this weapon set is not overpowered. The game remains a challenge.

Most of the weapons need reloading, and, as the author of the mod warns you, it’s clip-based. This means that you lose the ammo remaining in the weapon if you reload. This forces the player to be more mindful with reloading.

Your melee weapon of choice is the Sledge Hammer. It is one of the two starting weapons. Why bother hitting enemies with your fist if you are able to carry around a heavy chunk of iron on a stick at all times? Look out for an upgrade for the Sledge — the Mjolnir Device (which replaces Berserk pack). This contraption causes your unfortunate targets being struck not only by the iron but also by electricity. Mjolnir Device also heals the carrier to 100 health (just like Berserk) for some reason, but I doubt anyone would complain. 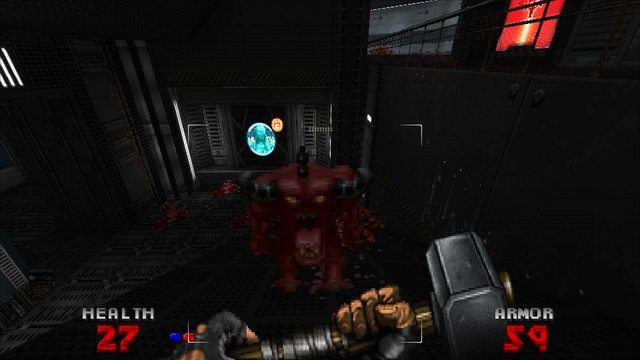 The second thing that you have readily available is Marston KP-8 10mm Handgun. It’s a handy gun that allows you to fire as fast as you are able to pull the trigger. It holds 10 rounds. Nothing much can be said about it, except that if you are lucky, you can find another one. In this case, you will fire them akimbo.

Taiga Revolver is another weapon you have in Slot 2. It’s a powerful gun that has two fire modes: primary (single shot) and secondary (fanning), which is faster in the expense of accuracy. Taiga holds 6 rounds.

Two shotguns are available. Unlike the original Doom, they swapped roles: double-barreled shotgun (Maxwell Labs 1-2 Special) is weaker than single-barreled (M2097 “Bicentennial”). You can fire Maxwell Labs’ barrels either one by one or two at the same time. M2097 “Bicentennial” not only has much better accuracy, but it is also actually a good distance weapon, and it can be aimed down the sights.

Kurdd & Schaumers R90-PCW Assault Rifle is a robust multi-purpose weapon. It quickly disposes of your enemy on short and middle distances. It holds 20 rounds and has holographic sights. The accuracy could be better, but it’s still effective.

Corbex @99 Emplaced Miniature Anti-Tank Weapon (EMAW) is a rocket launcher. It holds 8 rounds, and it means that it is capable of destroying almost any enemy before reloading. The rocket trajectory is a fancy spiral, so the destroying is conducted with style. It’s hard to aim this monster of a gun, but you rarely need high precision while launching explosives. Just point to the general direction of your enemy, and you should be fine. 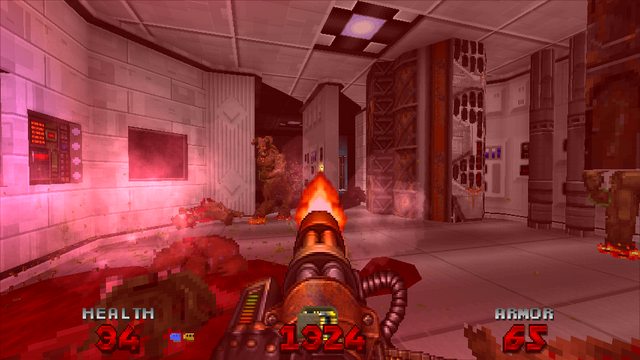 The original Plasma Rifle replacement is a surprise — it’s not an energy weapon, it’s Makoto Arms SOBAT 17.5 Infantry-Fighting Rotary Cannon. It’s a mighty weapon, demolishing anything that happens to stand that side of its barrels. The suppressive fire is enough to keep the enemy occupied with feeling pain.

Weapons have a dedicated ww-doomnukem-lore.txt lump inside the mod, so if you want to know more about them, check it out!

There are two of them: visor and minimalistic. Visor HUD is pretty and immersive, but if visor HUDs are not your thing or it takes too much screen space, there is a minimalistic one. 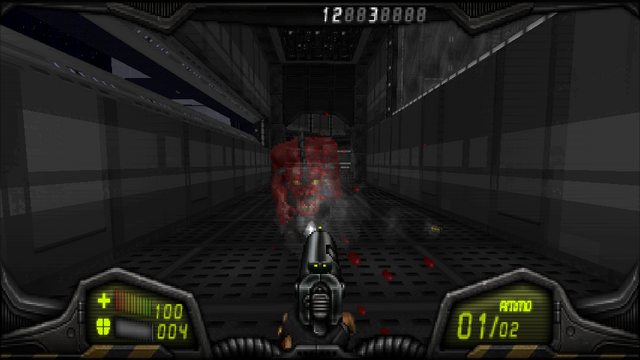 Also, in automap mode, the HUD displays how much ammo you have for each of the weapons.

Monsters are a ragtag team. This is a part of a mod that still looks pretty much WIP: some enemies are complete replacements, some of them are mere reskins and may have slightly altered behavior, and Spider Mastermind is not changed at all.

Interesting points are that Baron Of Hell and Hell Knight (now called Tribal Knight) now have more differences. Tribal Knight’s usual attack is weaker but faster, and sometimes Tribal Knights can use baron’s attack.
Imps come in three variants. The difference is mostly in the looks, they have slightly different attacks. Imp is the only demon type that is randomized. 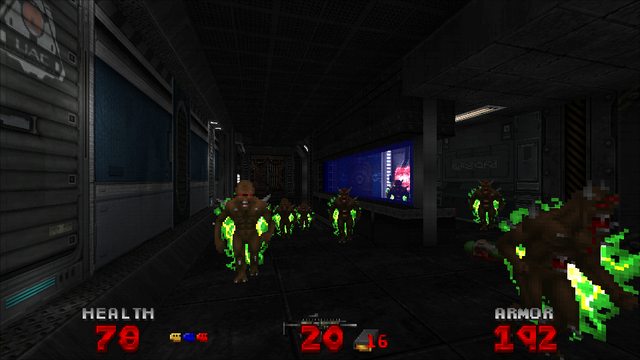 Cacodemon behaves like the original, but its death animation may make you chuckle. It doesn’t fit the more serious theme of the mod. Or maybe it’s the death sound that is guilty?

Arachnotron is replaced with Hazmat Trooper with slightly changed behavior. Arch-vile is replaced with Vore from Quake. It shoots powerful exploding seeking missiles. Pain Elemental is replaced with Bog Elemental, which looks similar, but instead of emitting lost souls, has two kinds of projectile attack. Also, it releases poison clouds on death.

Because monster lineup feels unfinished, one may want to play Accessories to Murder together with another monster pack. This setup is totally playable, with the only exception that the player won’t get akimbo Marston KP-8.

A lot of attention is given to gun sounds, explosions, fire, and smoke. These things are top-notch. They constitute a lot of what Accessories to Murder so satisfying to play. 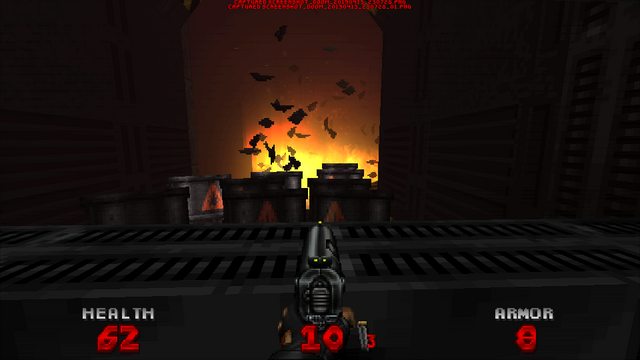 This mod incorporates Droplets by Josh771 (formerly known as SidDoyle), so the good amount of colorful blood is guaranteed.

One of the distinct elements of this mod is the use of voxels. Almost all the pickup items are represented with them, and even empty shells of some weapons, including the ones from Makoto Rotary Cannon. This looks cool but may cause the frame rate to drop on some machines.

As previously mentioned, there’s a lot of new sound going on in this mod. The weapons all have distinct sounds for their reload, fire, pick-up and raise animations. A common theme for all the firing sounds is, that they carry a lot of punch, which really plays well with the metallic, raw look of the weapons.

Some monsters audio queues have been redesigned. I find the new zombie sounds to be somewhat silly, but I’ll write that down as a matter of personal taste. One thing can be said about the length of the death sounds. Some new sound files are much longer than the originals, which in some cases result in a very chaotic arrangement of gurgling / garbling when blasting through a room of zombies. Whether this is good or bad is once again subjective. As far as I’m concerned, longer death sounds work better with bigger monsters, since it’s less likely that 10 Barons of Hell go down within seconds of each other as opposed to Zombies.

Another example of a redesign is the Spectre (now called Mech-demon). Graphically the Spectre no longer appears as “old-school tv-static”, but instead is completely invisible. The only thing that gives the Spectre’s whereabouts away, is the dust and sounds from its footsteps. Personally, I think the addition of sound vs. the subtraction of visuals works very well.

For most of the power-ups and reward sounds wildweasel has gone with what I like to call an “arcady” style. The “secret found” and automap pick-up sounds in particular are composed of synthesizer jingles. Short, sweet and to the point. Nothing more to say really.

Minor nitpicks can be pointed out, such as the pick-up sound for the cigarettes has a smidgen of noise at the end, which is noticeable when picking up several of them. Also, some of the firing sounds are cut short before the reverb fades out completely. On the other hand there are some details which work really well. For instance, Doomguy has 3 different tiers of pain which works in the same manner as in Quake. The lower the health when hit, the more agonizing the sound.

Accessories to Murder is a mod that is totally worth playing. It contains elements that make it stand out from other mods. The arsenal is an unforgettable experience. But the quality of the different parts of the mod is uneven, especially in the monster department. It would be awesome if the author revisited the mod at some point and filled the few remaining gaps.

You can download Accessories to Murder by the links provided in the original post.
Last edited by m8f on Wed Aug 10, 2022 9:56 am, edited 2 times in total.
Top

Not mentioned in this review: the two shotguns reload shell by shell, no magazine waste for reloading early. The SOBAT 17.5 chaingun and BFG use your full ammo capacity and do not reload. Overall the magazine-based reloading in this mod is not cumbersome in the slightest, and I say that as someone who is not fond of magazine-based reloading. That last bullet in your Marston KP8, TAIGA .50, or R90-PCW can do a lot for you (one assault rifle bullet has the tendency to down any zombie!) and reloading doesn't take much longer than a second in most cases (the longest reload in the mod is the dual pistols). And as a last tip, the Sledgehammer forces monsters into pain states

I do hope we'll be doing more of these little showcases. It's nice to have something similar to new stuff chronicles on this site, especially since many, many great mods get swallowed by the forums as their last update passes into history. I'm not saying that we are buried by substandard work (far from it, the level of talent on this forum is sometimes astonishing) but it's nice to give some mods a bit of permanence.

These are very well written and I do enjoy reading them, too.

This mod truly is a gem.
Top

Good, Groovy, Gracious Classic Weapons Mod from A Doom Community Veteran, Wildweasel! Him and Doomnukem really did a Fine job making this Mod and i was very satisfied with the Result. Along with Weapon Spites, The Sound Effects are also Top-Notch. Wildweasel is really good at finding some Gold Quality Sounds. Especially the BFG Firing Sound. Probably one of the reason why i'm visiting Freesound very often! I'd like to play this mod one more time, reminds me of good memories with it.

And Sadly i'm not sure where Doomnukem went, and if he's still Active around on ZDoom Fourm or any other Doom Community Website. I would like to see his Return and surprise us once again with his Fantastic and Heavy-Metal Spriteworks!
Top
5 posts • Page 1 of 1