//Preceding events.
-07/22/2009. It is discovered through hadron collision that Membrane Theory is correct, 12 dimensions confirmed. "The 11th dimension being special in that it is a "complete" dimension (as is the third) in which all reality existing within space-time is reliant on that dimension (if it exists within it) to be made physical. Also known as 'hyperspace', meaning beyond space, or above space. We exist on three dimensions, the next complete 'reality' I guess you could say is the 11th dimension, so 8 more dimensions stacked on top of each other, and you get this very expansive universe where all matter is stretched much further across space-time than in the 3rd dimension. I guess I should say just space...there isn't really any time at all within hyperspace. Needless to say the sci-fi nerd in my is very excited for what the future holds. If we can harness this information into a viable resource we may be on the cusp of travelling faster than the speed of light." - Dr. Ellen Mitten.
-09/30/2009. Virtual particles are proven to exist. Once hypothetical, they are shown to exist spatially between all dimensions. Instruments capture images of them within the 11th dimension.
-02/19/2011. Team from UCLA issues paper postulating that by exciting and directing positively charged virtual particles between two positively charged plates in a vacuum (similar to the Casimir effect) they will become static particles until the charge is removed. Paper is bought by the military-industrial conglomerate Union Aerospace Corporation (UAC).
-08/08/2014. It is discovered that magnetic fields traverse all known dimensions of reality, and are proven to originate from the first dimension permeating "through" dimensions intact and unchanged.
-11/03/2018. UAC recreates and confirms theories. Two weeks later transfer of 3194 particles takes place using exact models of experiment, with receiving end (roughly 500 nm away) being negatively charged.
-03/01/2018. UAC begins test to magnify the gap between transmission points. Within months distance is doubled, growing exponentially.

//Current events.
-03/15/2022. Following the incident at Site One Phobos, Union Aerospace Corporation attempts to cover up the event and eradicate any trace of evidence by soliciting a distress signal to the nearest USMC installation (Forward Operating Base: Swift, located in the Swift impact crater of the Deimos moon. Roughly 2 km from the UAC Deimos installation). Once the signal was received MARSOC authorizes deployment of infantry battalion 7/1 for "Direct Action" mission. 11 hours after battalion touchdown all communications cease. Installation sensors indicates one survivor. All attempts to contact fail.
-UAC (being the largest supplier of arms and munitions to the United States military) requests immediate hearing with National Command Authority. Demands for USSOCOM to supply special operations detachment with dedicated communications to investigate Phobos Site One and Deimos installations from NCA. With their demands met, SFOD-A is prepped and quickly briefed by UAC lawyers, all information prohibited beyond readied units, including superior officers. ETA 13 days.
-UAC proposes using their classified Dematerialized Transmission Architecture (DTA) to expedite deployment, despite heavy regulations on teleportation caused by major safety and ethical concerns from scientific community. NCA approves transmission of forces despite apprehension and protests from advisers.
-Operators placed in Cryogenic Stasis (UAC PAT:20582-148-084299) to prepare for transfer. During preparation SATIMAGECO and ROSCOSMOS begins notifying governments of fluctuations on the Phobos moon. Gravity field emanations create visible warping of light with an estimated atmospheric pressure increase of 2817-3151 PSI. Transmissions received at the Arecibo Observatory contain cryptic languages and encoded symbols. Japan Aerospace Exploration Agency (JAXA) experiences complete disappearance of their deep space exploration vessel, JSG Ishimura.
-"Gate" is open (both points are charged to their corresponding magnetic Gauss and set to matching harmonic frequencies). Tests to dematerialize an object and transfer it through hyperspace dislocation (the attachment of third-dimensional particles to virtual particles, thus extending their range to multi-dimensional), having been successful in the past, are interrupted. Reversal of polarity takes place among transmission plates. All time within a 14 kilometer radius of UAC Headquarters stops for 19 seconds. All magnetic energy from quantum matrix testing chamber is removed, rendering personnel lifeless. Sensors indicate foreign entity in testing chamber. Phobos moon is wiped from the heavens. 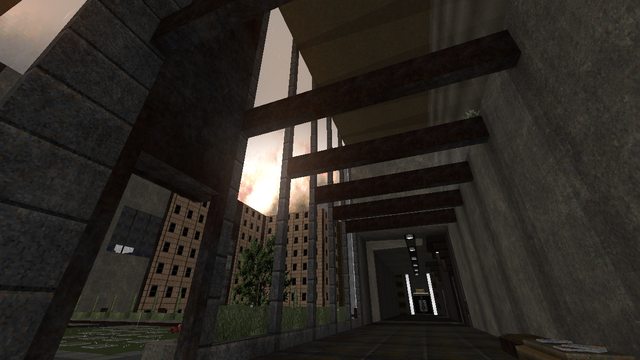 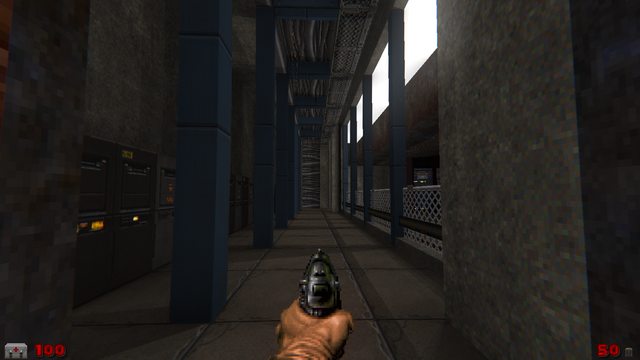 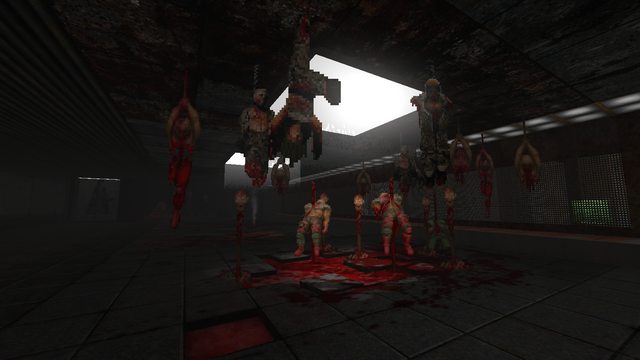 
Notes/
All resources sourced and credited responsibly.
All music made either by friends of mine, or by myself using royalty free recordings and broadcast (very simple example in the video. I actually used to have a Stars of the Lid song there, but when I asked if I could use it they wanted to charge me 11,000 bucks haaaaahaaha. fuck all that).
All maps (once released) can be used for whatever as long as i am given full credit. All resources as well, as long as you credit the author (detailed in credits).
This is going to be the slimmest example of a megawad I can muster and still put out within my lifetime (8-levels) documenting the escape of an SF0D-A operator from the UAC headquarters here on earth before the story of doom 2 starts (...if you can call that a story). Super simple, if you read that bullshit up there, hell yeah. Get out of the building before reality collapses. The further you get away from the building the less anomalies and demons will be there (in theory).


IMPORTANT BECAUSE PEOPLE ARE GONNA COMPLAIN.
This pack does not have difficulty settings.
This pack is not run and gun the entire time. (but this is doom, lets be real here, the majority is murder).
This pack is very taxing (it also weighs about 220MBs, i havent cleaned it up but thats where it sits as of now...i can hear you complaining already.)
This pack is GZDOOM only.
There are no dynamic lights, so its sector heavy but i think it looks much better. sector fades for life!
JUMPING AND CROUCHING ARE REQUIRED (in fact I will make you do it to escape the very first room...so).
ALSO, this has been made to be compatible with as many weapon packs, and mods as possible. Smooth Doom, Weapons of Saturn, Everything WildWeasel, Brutal Doom, (havent checked project brutality because its like a fuckin cartoon, but im sure it works), PFEnh, whatever. If it doesnt work let me know so I can fix it.
This is a combination of all the games I love and play (and have tattoos of). Half-life, Dead-Space, Silent Hill, and most importantly Doom. Theres some scary shit, some weird shit, and at the end of the day youll be racking up bodies. There will be dead bodies everywhere, satanic imagery, and shit to shoot. All the things you expect from a kick ass WAD, with a little mustard on top.

I want something VERY specific in this pack, and so I havent tailored it to anyones play style, i havent tailored it for the masses. I wanted a certain map pack that nobody else has made (more like plenty of people have done but not combined), and as such it has to be made a certain way to work the way I want it to. Some people will like it, some (im looking at you veterans..."why cant i play it in hardware mode...wheres the version for DosBox! I remember when doom maps only had to be fun! now theres all this freakin lighting and jumping! *and then complains about too many vanilla maps hahah) will hate it. Thats not really my problem. if you dont like it, dont play it, its no biggy. Its the pack *I* have always wanted to play. hopefully anyway. and I really think other people will enjoy it too.


ALSO, KEEP IN MIND THIS IS MY FIRST PACK *party noises*. So, what you see is what you get and I hope I can do the community a justice by dropping something different while still keeping it DOOM (and being the first new guy to come out with something that doesnt make people go "a lot of those rooms are square").

Release beta/preview/whatever, we will check for sure.
Top

As I've said in another thread, I love your mapping style and your visuals. Looking forward to the finished product.
Top

As long it doesn't have jump scares, it's fine.

EDIT: the screenies look amazing, probably it'll be worth the effort! GL on it.
Top

Nash wrote:As I've said in another thread, I love your mapping style and your visuals. Looking forward to the finished product.

my man! I was actually waiting for your day and night cycle system to do a city but man open areas are hard as shit to run. but id love to house some of that killer tech youre putting out.

please do, once i finish the first map and retexture the second, ill send it out for playtest.
Top

This looks super cool and I love the story that does with it.
Top

GAA1992 wrote:As long it doesn't have jump scares, it's fine.

EDIT: the screenies look amazing, probably it'll be worth the effort! GL on it.

uh ohhh, its got a lot of jump scares hahaha, is that gonna be a no go!?

jump scares are my shit.

THank you! Ill be sending you one of the first betas once its ready for that (banging out the second map now)


zrrion the insect wrote:This looks super cool and I love the story that does with it.

Thanks man! Ive just always wondered what it looked like on earth from a different perspective...and then i threw some pseudoscience on and...i watched alien recently so that kind of "heres a plausible explanation" thing i love that shit haha

okay wait, how the hell do you remmeber that name if you need to log back in?

second thank you! youre all getting me stoked, i was really hoping it wouldnt be teased with people hating it.
Top

hahha no need to envy man, pity me for embarking on this god forsaken quest. also help test it when i need players haha, if youre interested of course. ill always return the favor for anything youre working on.

also i just watched that solo video you posted in the selfie thread...shits buttery man, your guitar sounds suuuper crisp.

also whaaaat the hell are you doing with this guy? this looks awesome.

THERES ANOTHER VIDEO!? dude, give me more.

That mod deserves its own thread one day... There isn't a lot to show yet.

And thanks about the guitar video. I just bought a new audio interface with better preamps so hopefully the quality increases lol.


cortlong50 wrote: hahha no need to envy man, pity me for embarking on this god forsaken quest. also help test it when i need players haha, if youre interested of course. ill always return the favor for anything youre working on.

Definitely! That would be cool!
Top

Very much looking forward to this one. I'm a sucker for some good atmospherics and it looks like this will have it in spades.
Top

About those two vids, I'm also making a SH-themed mod so that is very relevant to my interests.

Also hi Icarus, fancy seeing you around these forums.
Top

Was this inspired by an SCP? With the story involving coverups, space-time shit being messed up, I almost though at first glance along with the top picture that this was inspired by SCP-1936 (2 eldritch Gods duke it out because someone lured them both to the town).

Either way, this is gonna look sweet.
Top
74 posts