Thread is dead; mod isn't! To report bugs, suggest stuff, or contact me in general, you can either reach me on the Discord listed in the repository's description or open an issue directly on GitLab.

Also feel free to post in the thread. I'll probably reply here as well, but if you're on either of the aforementioned platforms, I suggest you get ahold of me there. Chances are your question would be answered a lot sooner.


Spoiler: Old thread contents, quite outdated
To give you a quick rundown of why this would interest you:

Spoiler: Guide on how to make presets
Most of the work I'll do myself. However, I need to know one thing, and I need the information to be absolutely precise: I need the name of every preset option and its value. MISSING options will be considered UNTOUCHED and therefore will NOT be affected by the preset.

Use labels from the menu so things don't get confusing!

Spoiler: F.A.Q
Q: Is this compatible with other PWADs?
A: Yes.

Q: Is this compatible with other IWADs?
A: Yes.

Q: Is this multiplayer compatible?
A: Yes. Surprisingly.

Q: Does this feature new blood?
A: No. That is beyond the scope of the mod.

Q: Where are the credits?
A: Inside the repo.

Spoiler: Known Issues
- Actors with black blood will spawn red blood. Not aware of any possible fixes. 020202 for blood color works fine, though.
- Monsters that don't end their death state with a -1 frame duration won't be able to have their corpses gibbed.
- Gibbable monster corpses will spawn red blood, regardless of the blood color of the monster itself. Cannot be fixed.

A video I whipped up real quick to showcase the mod. You can even see the debug stuff. Don't let the explosiveness scare you. It's adjustable.
Top

Finally you can have ludicrous gibs in any TC. I'll have to check this out.
Top

Quick update for two things:
- Fixed a critical issue where gibbing Keens would not activate their special.
- Updated OP with a rundown of sorts and necessary GZDoom version.
Top

From looking at the code, I'm assuming that this does not respect different blood colors?
Top

Nope. It doesn't. I reckon it could easily be made to respect them, but red gibs/floor decals with green blood trails would look really off. Initially I did experiment with customisable blood/gibs color, but that didn't work out as expected, so it got scrapped. The big problem is in the translations.
Top

I'll try messing with it later on my own to see if I can get blood colors to apply. I believe using the flags SXF_USEBLOODCOLOR and SXF_TRANSFERTRANSLATION in the right way can make it work. There are no issues with translations on flat sprites, are there?
Top

None that I know of.
Top

So, I finally got some free time to experiment with this, and I have a 50% working method for differently colored blood. 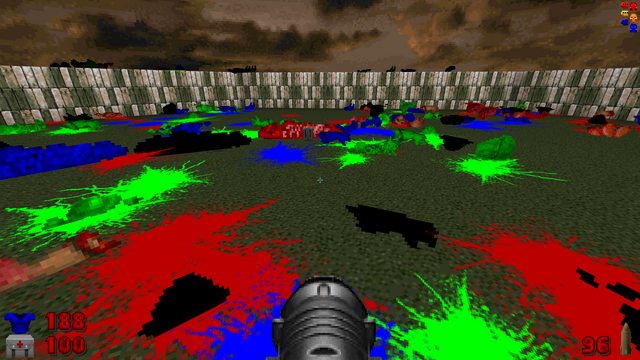 Unfortunately, I've run into some problems with this method.
Here's a version I quickly modified if you want to poke around in it. I'm very unfamiliar with ZScript so I could be doing something horribly wrong. Summon "test1", "test2", or "test3" for zombiemen with green, blue, and black blood respectively. Removed, no longer necessary.
Last edited by RiboNucleic Asshat on Mon Jan 29, 2018 7:11 pm, edited 1 time in total.
Top

Well, I've found an annoying bug. If you're playing this with Legendoom, any Legendary monsters (the ones with a red glow) that are killed via gibbing will not drop a Legendary Weapon. You'll need to kill them normally to get a weapon drop.
Top

- If enabled, blood now respects the bloodcolor property of the gibbed actor.


PermaNoob wrote:When no BloodColor is specified, e.g. every single vanilla actor, gibs are untouched (which is good) but splats are black (obviously less good). I can change black splats to red but this means actors with actually black blood will have red FX.


PermaNoob wrote:I have absolutely no idea how to properly color the particles! I can't seem to set the particles' color to the StencilColor. I can set it to BloodColor, but since the BloodColor isn't passed down this does nothing for me.

StencilColor is actually fillcolor. This has been addressed and fixed.


PermaNoob wrote:Using the color unaltered makes it cartoonishly bright. This can easily be fixed so it's not a huge issue.


Cryomundus wrote:Well, I've found an annoying bug. If you're playing this with Legendoom, any Legendary monsters (the ones with a red glow) that are killed via gibbing will not drop a Legendary Weapon. You'll need to kill them normally to get a weapon drop.

Damn, I doubt anything would come out of this due to how LegenDoom handles all the item drops. I'll investigate, but the estimated chances of nothing happening are about 99%.
Top

Dang! This is satisfying Blood and Smooth Gibbing! i will enjoy this more. thanks.

- If enabled, blood now respects the bloodcolor property of the gibbed actor.

I tested it with Bloodfixer (which is fixing the blood color of the enemies), the experiment worked.
Top

- Fixed issue where ACS scripts would not get called/finish upon destroying an actor, thus breaking mods and maps.

You rolled a 20! Managed to fix the LegenDoom issue. Wasn't as hacky as I expected it to be.
Top

Quick update with a few things.

EDIT: Critical issue with the LegenDoom fix. Game will crash if Archvile attempts to resurrect a gibbed enemy. Trying to fix this atm. Fixed.
Top

Sweet! This works wonderfully now. Ketchup is essentially 100% obsolete for me at last, thank god.


Lud wrote: StencilColor is actually fillcolor. This has been addressed and fixed.

Huh, I didn't know that. The wiki isn't too clear on how that works and I haven't even touched DECORATE let alone ZScript in a few years, so I got confused.
Top
196 posts