Hi,
Just wanted to share with you people a 3D engine I'm working on using the libGDX framework, written in Java. It's really in it's beginning. Yes, I know there are plenty of 3D engines out there (even for free) including the wonderful Doom engine but I'm doing this mostly because I want to learn and improve my 3D skills and knowledge (also improve my coding and software architecture). I aim to build an engine which resemble the classic Doom, Duke Nukem 3D and all the 90's FPS engines: 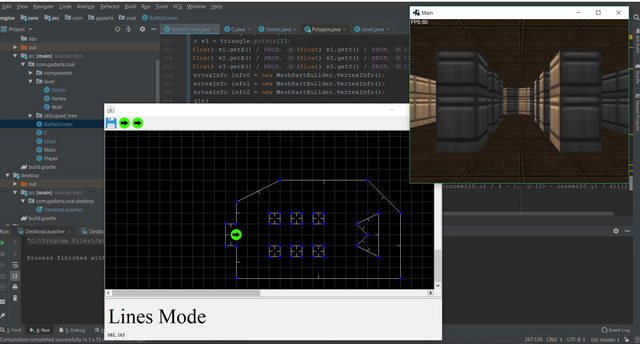 On the left is the level editor I'm creating for it which is a regular Java project - only using the Java Swing (for drawing the GUI and the vertices, lines and sectors) and other geometry libs . On the right window you can see the engine which I develop using libGDX.
I've recently added textures to the ceiling and floor. That was a really difficult task. At the beginning I used the EarClipping algorithm to create the triangles that form the sector's shape (which represent the ceiling and floor). But later I realized a problem in situations where the sector has holes in it (like the one in the screenshot). For that EarClipping is not enough. So I looked up for another solution and found the Delauney Triangulation algorithm that can handle polygons with holes. The result can be seen in the image

I plan to make it modular (level editor, engine) and open-source for people to use it and create games. I also plan to make my own game with it.
Next task: add height element to sector's floor and ceiling in order to create structures such as stairways, holes, towers and etc...
Good day!


Update 6/10/18:
I've managed finally to add the height element in the engine. Each sector has a floor height value and a ceiling height value. Using these values you can create stairs, towers, windows and more... The result can be seen in the image 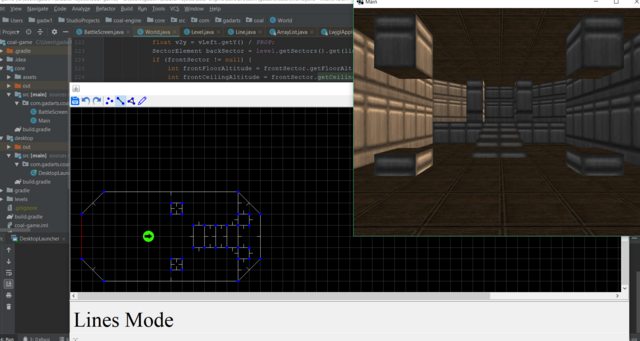 Interesting. Will be watching how this engine progresses. Good luck and hope you enjoy the learning process.
Top

Thanks. I'll update more on this. Even though I'm a doomer for a long tine, I didn't realise this community is so active. Great place with lots of indie projects to be inspired by

Update:
I've managed finally to add the height element in the engine. Each sector has a floor height value and a ceiling height value. Using these values you can create stairs, towers, windows and more... The result can be seen in the image