Hello everyone! I'd like you to check out my first ever Doom mod, which I've been working on since 2016. 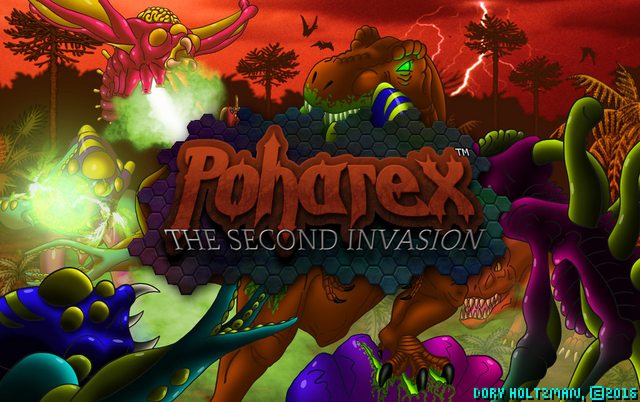 What is this mod, exactly?

Poharex: The Second Invasion is a Doom 2 total conversion based on my webcomic series, Poharex, which I've been working on since 2007. In this game, you assume the role of Poharex, a heroic dinosaur who must defend his primordial jungle home from an alien invasion. These aliens did not arrive from space, but from within an ancient, abandoned city hidden deep within the jungle, and Poharex must survive the long journey there to eliminate the alien threat once and for all. You start the game with no weapons other than your powerful jaws, which you use to crush your enemies to a pulp. Later on, you'll find out how to use the Thumos -the aliens' power source- to turn your roars into powerful energy blasts.

In addition to replacing all monsters and weapons with my own, the mod also replaces the default Doom 2 tree objects (BigTree, TorchTree, Stalagtite) with my own custom plant spawners, to give any map an appropriate prehistoric vibe without having to edit every map manually. 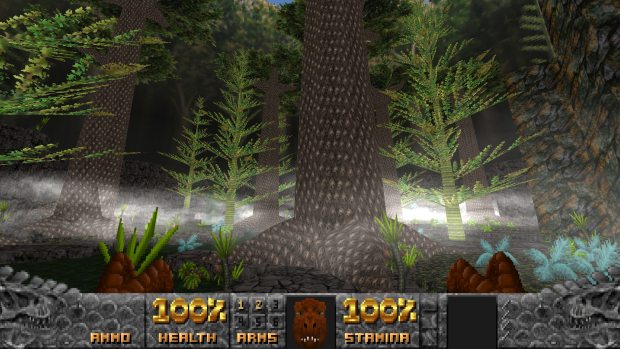 There is also an entirely new campaign in the works! Rather than a linear sequence of levels like the first version of the campaign, this one is a hub that focuses on exploration, while still featuring plenty of combat- taking inspiration from the likes of Hexen and Unreal.

I just downloaded the file to look inside it. Immediately I noticed that enemies are set to be far more aggressive on the Easy and Very Easy skills than they are on Normal. Aggressiveness is 0 by default, maximum of 1, and they're bumped up to .5 and .75 on the low skill levels.
Top

Those are some pretty sprites there, good job. :D
Top

Wow amazing sprites man, reminds to me of Turok too eheh
Top

I hadn't heard of your webcomic series before this but I like the wacky concept of it... and as others have already said the sprite work is great.
Top

I didn't like the gameplay, because if you play as a dinousaur I expect to have more mobility in the attacks , principally in the melee attack it doesn't look like I am attacking.

(This is just a personal opinion --->) I didn't like also the shooting mechanic , but again this maybe is a personal thing , I just don't feel like a dinosaur firing magic projectiles match too well :/

I liked it a lot the pixel art tho :3 , my only complain was the blue pterodactyl, which was really cool , just some pixels in the edges of the wings looked kinda weird.

Maybe you should make it as a Mod instead of a Tc , I mean so you don't have to replace all the weapons with shooty shooty things for dinosaurs.
Top

Ed the Bat wrote:I just downloaded the file to look inside it. Immediately I noticed that enemies are set to be far more aggressive on the Easy and Very Easy skills than they are on Normal. Aggressiveness is 0 by default, maximum of 1, and they're bumped up to .5 and .75 on the low skill levels.

Thanks, Ed. My mistake was assuming 1 was the default value... I'll fix this as soon as I'm able. Let me know if there's any other such problems.


Amer. wrote:I can´t add you on discord please send me your name discordtag

Fixed. Thanks for telling me. I wasn't sure if I were supposed to post the name or the long number.


Nash wrote:Those are some pretty sprites there, good job.

Ozymandias81 wrote:Wow amazing sprites man, reminds to me of Turok too eheh

fluff wrote:I hadn't heard of your webcomic series before this but I like the wacky concept of it... and as others have already said the sprite work is great.

Thank you all so much! I'm glad you like the art style. Hopefully I'll be able to find some mappers soon.
Also- Nice to finally meet you, Nash. You probably hear that a lot, but I'm a big fan of your mods.


El_Sombrerero wrote:my only complain was the blue pterodactyl, which was really cool , just some pixels in the edges of the wings looked kinda weird.

Can you direct me to the specific sprites where you see this problem? I'll fix that as soon as I can.

More likely to be the other way around. Are you familiar with the works of Plato?
Top

Looks good! I'm at work now but I will give it a look when I get home.

The sprite work is phenomenal. Keep up the good work.
As El_Sombrerero has already stated, the melee attack should really have an animation to it. Perhaps some clawing attack? Just standing there and doing nothing animation-wise feels really weak and bland. In fact, are you sure you want your primary attack to be a chainsaw replacer? If melee is going to have a big part in this mod, perhaps it should be more of a fist replacer? Then your attacks would need to have more tactical thought put into them, since there'd be an element of timing.
I'm really glad that the Thumos of Justice (the pistol equivalent) is still good. I really appreciate when the starting weapon / weakest gun / etc is still actually relevant throughout a game.
The Shield-guys feel really fun to fight.
The poison moths who drop poison clouds are painful -- they're actually the most dangerous monster in the mod so far. Perhaps tone down how much damage the poison does? If this is the intent and I just suck, apologies.
The suicider (I forget the name) that replaces the arachnotron is very cool, but also surprised the hell out of me the first few times. Perhaps it should have a tell, like a loud scream when it gets within a certain radius of you to teach the player that something dangerous is on the way.
The Thumos of Rage and the Thumos of Spite are fun to use.

There are some other problems which have to do with how the mod interacts with existing Doom maps, but you're planning to get your own mapset going, so that's not so relevant.

Over-all: Pretty cool, lots of potential.I haven't read your webcomic. Maybe I should do that.
Top

You had me at "you play as a dinosaur". I'm going to check it out and post my observations later!
Top

Will have to agree with others in that the melee attack doesnt actually feel like an attack at all.
Other than that, I noticed that on some things you mixed pixelart and non-pixelart. Like when youre heavily damaged your pixelart portrait gets airbrushed blood on his face. That looks kinda clashing.
Top

Not sure if it's just me having a bad version of GZDoom but when I tested this a few days ago it would hang whenever I went into Player Setup.

Also I agree with Gyro about the melee, it kinda feels weird having a chainsaw equivalent as a proper melee rather than a proper clawing attack but that's just me
Top
28 posts