What is it?
This is my attempt at recreating a 1996 FPS PC game known as Powerslave in America, Exhumed in Europe and Seireki 1999: Pharaoh no Fukkatsu in Japan.
This is a standalone mod, it does not require any IWAD to function.

Credits: see Credits.txt in the PK3. 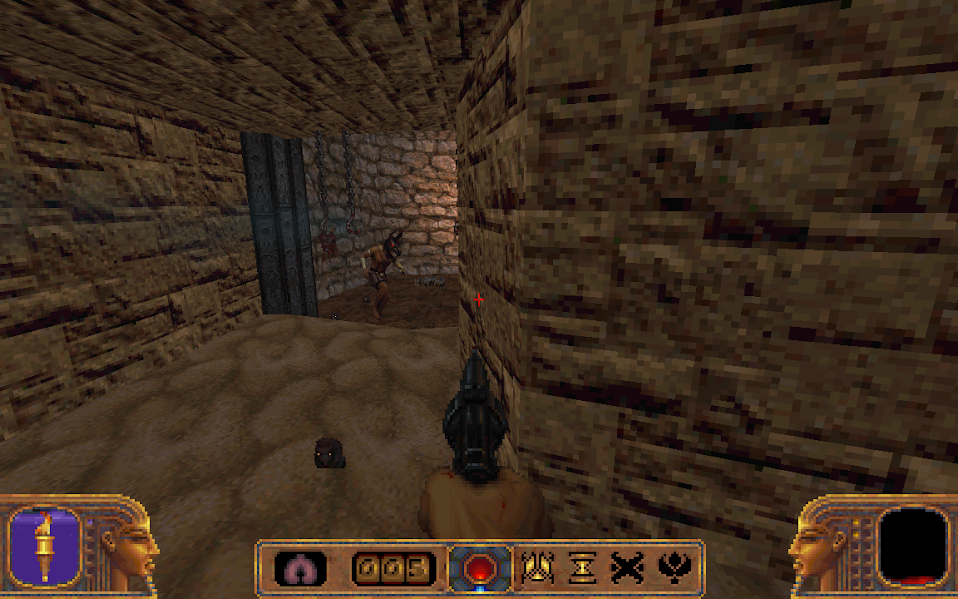 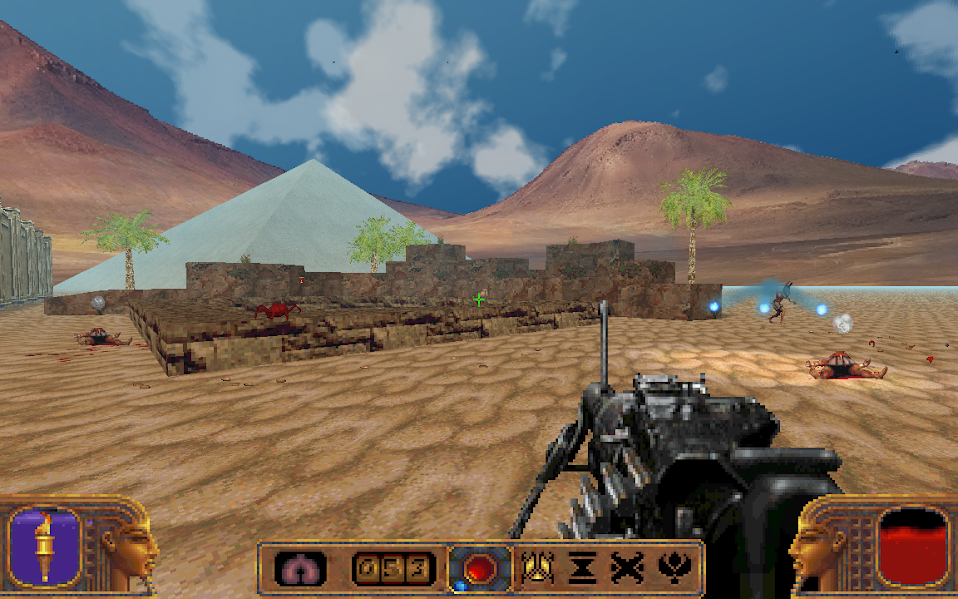 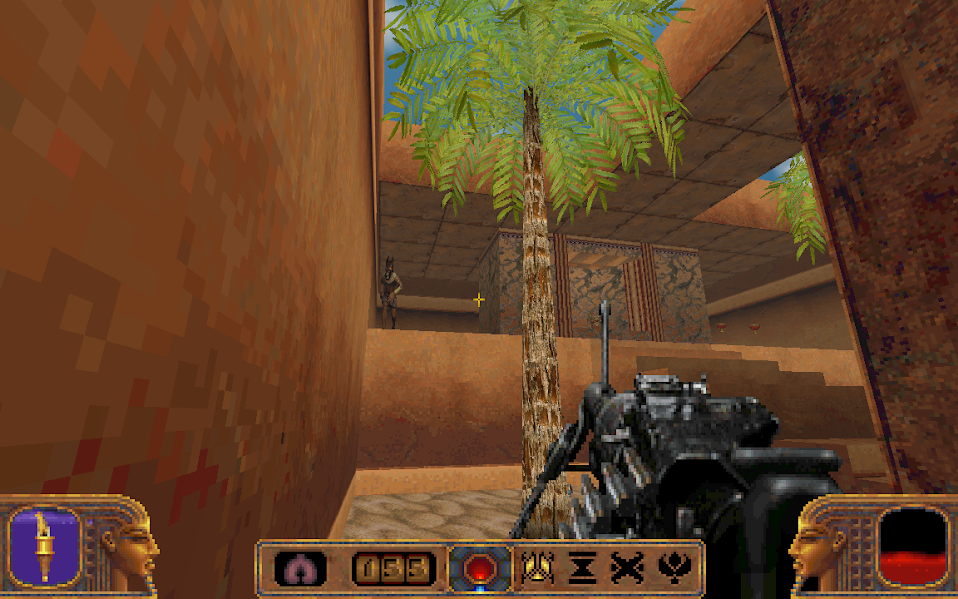 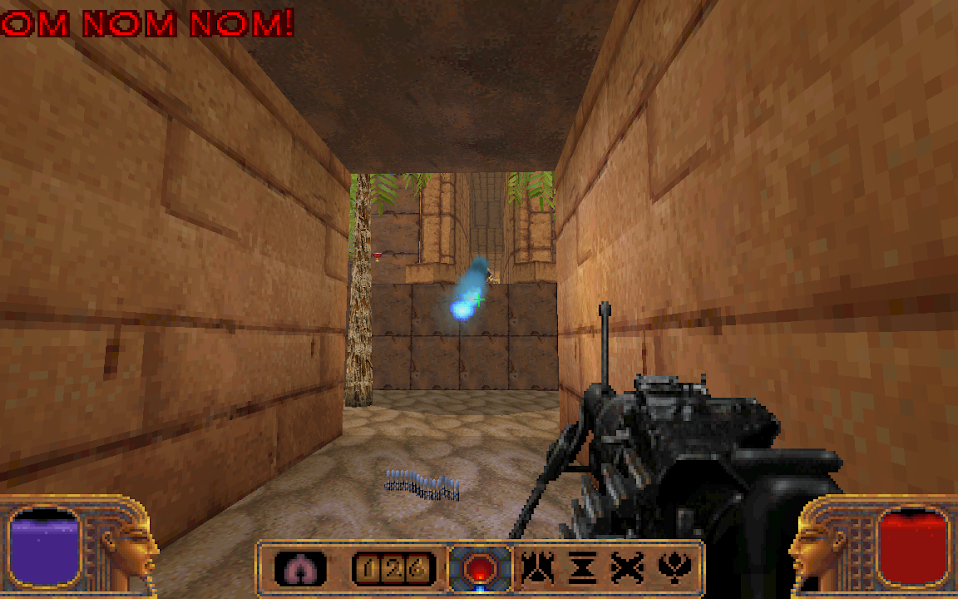 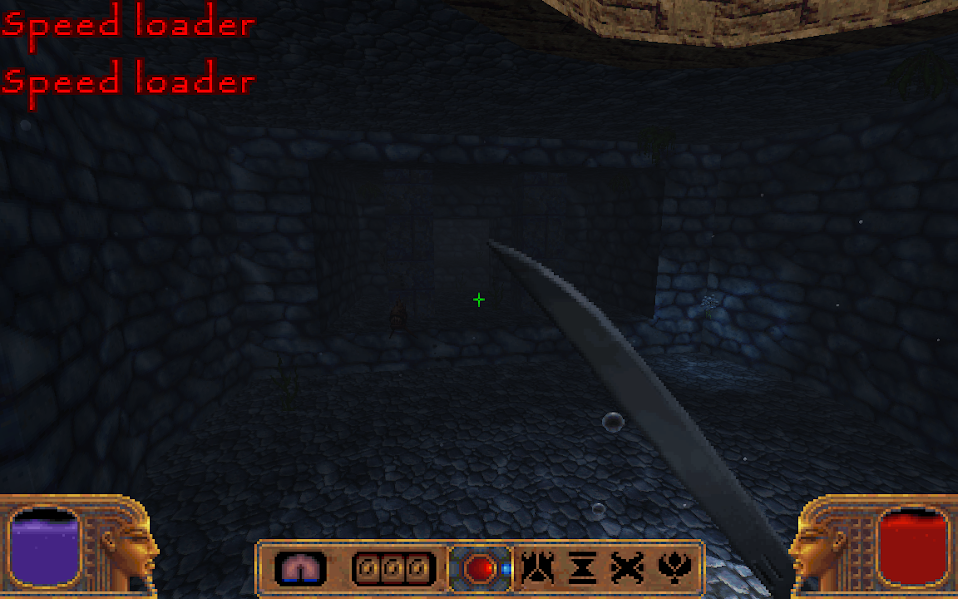 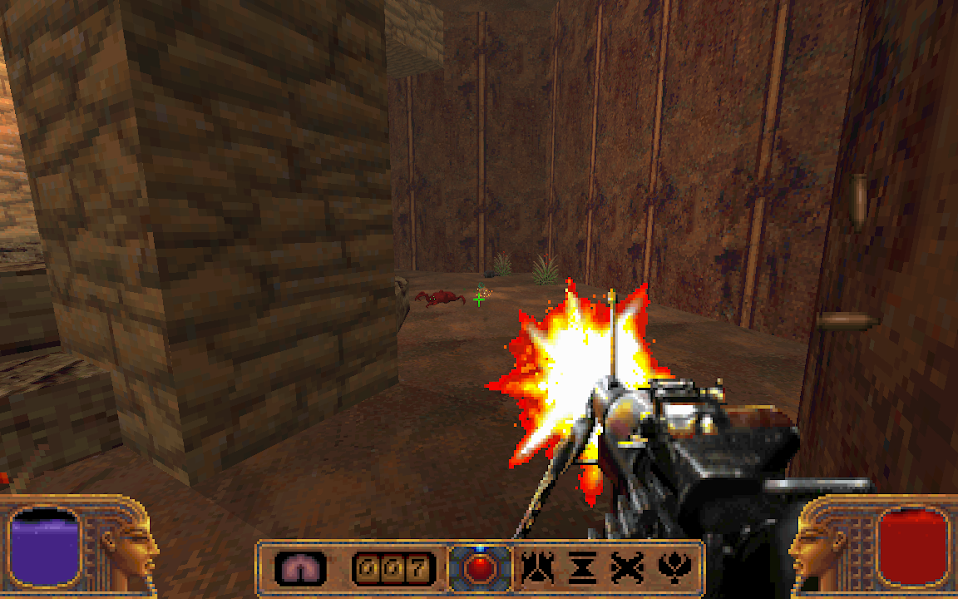 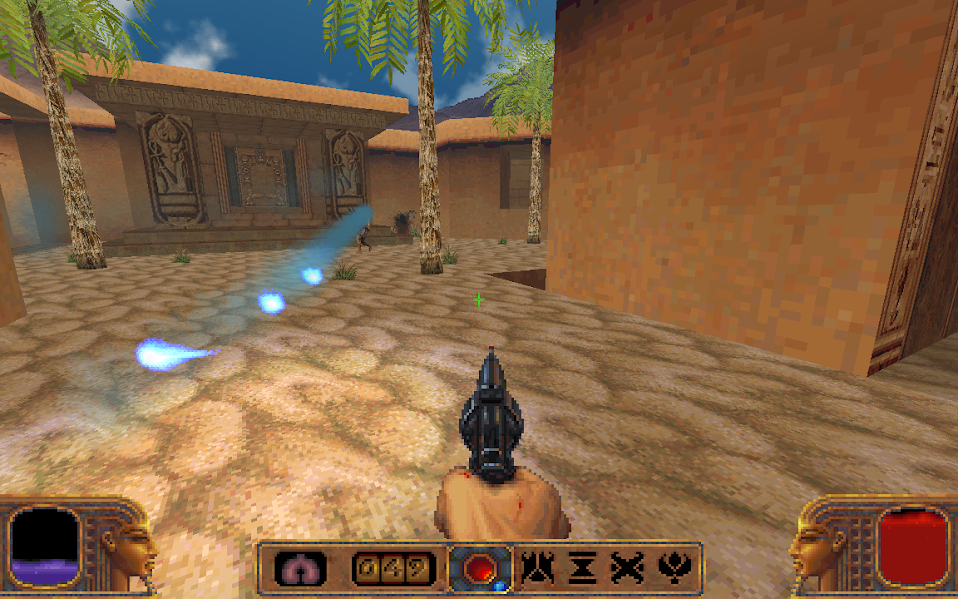 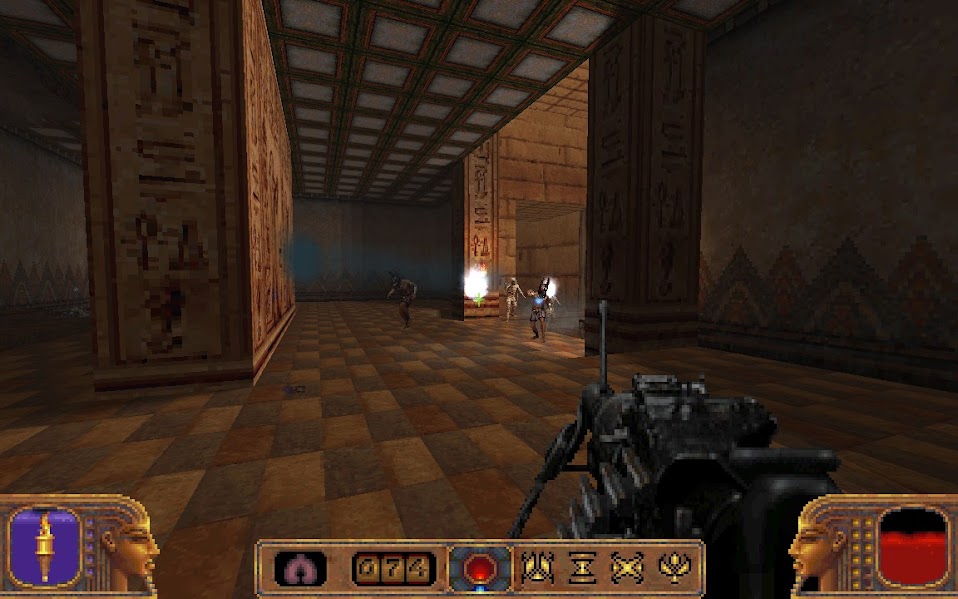 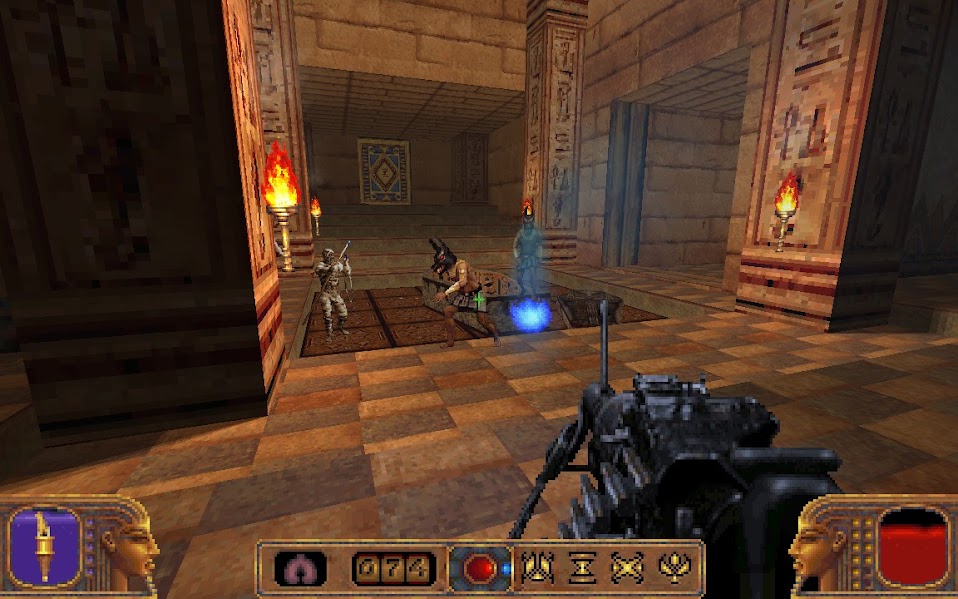 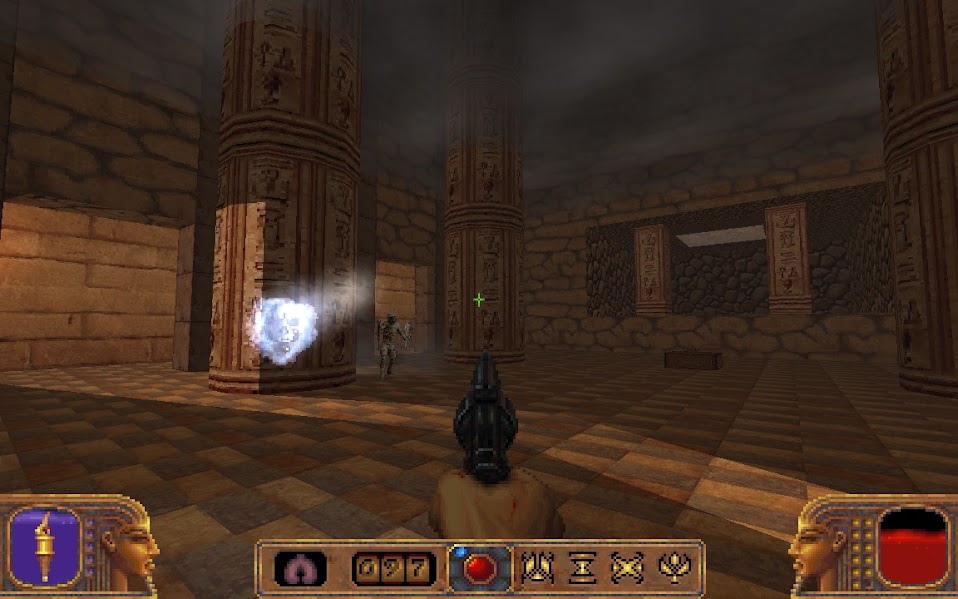 MISC:
Changed status bar type from Fullscreen to Normal.
Replaced some sounds which had cracking noises with better recoded ones.

System requirements:
This mod requires GZDoom pre-2.1 r655 or newer. It won't function properly with older versions of GZDoom and probably won't function at all with any other source port.
This mod extensively uses dynamic lights, so make sure they are enabled and use default settings (both "Light size" and "Light intensity" should be set to 1.0).
Alternative HUD is not (and probably will never be) supported, so make sure it's disabled.

, those Palm trees look amazing where did you find these? Or do you know how to create them?
Top

This game was surely good at their times indeed, I've finished it some years ago through DosBox and it was an amazing experience... Also I've ripped some monsters from it (I mean not this project, but Exhumed itself) for my project GORE + some sounds, and while I think this will be some new IWad for users, I hope this won't bump excessively with my mod... Really good work, now I'll give a look into it, expecially to know if you've included ONLY CHECKPOINT totems for saving purposes (this was the worst problem of original Exhumed for me...). Time to hunt some Anubi or Bastet derivatives...

WARCHILD_89 wrote:...those Palm trees look amazing where did you find these? Or do you know how to create them?

I don't remember where I've got the model (big chunk of work on this mod was done in 2012, so, well, I just don't remember... It may've been lifted from one of Sitter's model packs), but I've retextured it myself (using images found in Google image search).
Top

I thought this was a very old thread... (GZDoom on SVN reached r1600 IIRC.) Git numbering scheme counts revision from the last tag, and GZDoom labels development as "pre-next version" so it's "pre-2.1 r655".
Top

Great work man ! I Enjoyed play this version, even if i love the PSX version. There is two thing that bother me. The damage system is a little bit anoying and the blood look like coffee stain. Anyways, the feeling, the ambience is there since the first stage. The music is really cool too.
Top

I was working on something similar long time ago, but stopped because i wasn't able to figure what's up with the PowerSlave palette, it's a weird one.

Gonna play this because it seems awesome.

EDIT: Man, this is awesome, the graphics, the music, the everything, specially the music, i love egyptian themes mixed with guitars.

Now, either the blue balls shot by Anubis change your pitch and angle or i'm just derping with the touchpad on my laptop

Great effort, but the player definitely takes waaay too much damage. In addition, the anubis attacks jerking the view around make them more of a hassle than fun to fight. And those little red guys? A TAD too hard to hit, though crouching down and slashing with the machete seems to be the best way to get rid of them. Like I said though, pure wizadry.
Top

This looks orgasmic... I'll have to play this ASAP! Screenshots look gorgeous.
Top

Echelon5 wrote:Great effort, but the player definitely takes waaay too much damage.


Echelon5 wrote:In addition, the anubis attacks jerking the view around make them more of a hassle than fun to fight.

Judging by the overall reaction, I shall probably tone down this effect a bit...


Echelon5 wrote:And those little red guys? A TAD too hard to hit, though crouching down and slashing with the machete seems to be the best way to get rid of them.

I've actually written a Build engine map format 6 -> UDMF converter back in 2012, which did most of the dirty work for me. But yes, all the map editing was done in GZDB.
Top

From a quick test, I made it through the underwater section in the first non-training level and found that the game had not removed the "underwater" flag from me. So I could not switch weapons from the slow machete, my movement had random bursts of speed, and the player voice sounded as if it was drowning when I took damage.
Top

You may need this There are shotgun sound effects in the Exhumed game files.

If you use those, just be aware that they ought to be credited to Paul "nmn" Zarcynski (sp?). They were done in Powerslave's palette for a very old, very abandoned project of mine, so I have no problem with them being used.
Top
152 posts