Have you ever wanted to play as the Maiden of Mischief herself? Are you down with the newest incarnations of her?
Well, i've got the mod for you!
Harley's here, and she's got quite an arsenal, ranging from mallets, to cork guns, to frosting grenades, to bazookas, and some neat new powerups.
Plus, some rare Arleen Sorkin lines!
Gameplay footage over here, courtesy of the title screen's artist:

And all the links are down here.

Add-Ons
Harley's Jams
A couple of assorted songs to accompany playthrough. Compatible with Doom 1 and Doom 2.

Poison Ivy Companion Mod
Adds Harley's pallest of gals as a companion to your adventure. In memoriam of the Joker companion mod.

Harleen defending the earth from a demonic invasion? This is amazing.

She did kill a few parademons in Justice League Dark: Apokolipsis war.
Top

what exactly is Harley saying when she finds a secret?
Top

"Ta-da!"
It's a celebration.
Because you found a secret.
Also, just pushed out a minor update.
Top

Good Jolly Jester fun! It's interesting to see Harley Quinn blazing through Doom and the weapons are so much fun to use. Especially the Mallet, you literally can throw the whole thing at poor baddies. And i've got some feedback to tell ya, if you're okay with it:

Spoiler: Y'all ready for this?
- Cupcake bombs sometimes bounce quite a lot and takes a while to explode.

- Piggy machine gun, The Contingency Plan and Cupcake bombs/mines have quite, underwhelming impact sound effect, well in my ears.

- The Alt-fire of Harley's Magnum needs to be more than just a Punchline: Why not make it unlimited? To spare some ammo with? Or maybe increase the damage of it and spend more ammo.

- I'm not sure but feels like the game gives me rather too much ammo but shotgun shells and i already stuffed up my Machine Gun ammo after beating one level.

- Just a suggestion but i'd like to see Harley laughing when she gets exposed by her own Thumper laughter gas.

- She yells herself when enemies kill each other or from far distance.

And that's about it. This crazy gal just digs her tune!
Top

Spoiler:
About Harley's quote sysyem, yeah, it's a little broken, she does that, for some reason, and i don't have much of an idea on how to fix it, and the Corkgun's altfire is meant to deal more damage and not alert enemies, but have way less range.

Some how I'm reminded of Tank girl
Top

Just to keep the feedback consistent with the Discord one:

- The audio from the laugh gas grenade seems to loop indefinitely, even after death;
- The same grenade could use a higher arch;
- Harley would benefit from a 1-2-3 combo, just for kicks.

No other gripes, no sir. Really good!
Top

Well, i took my sweet time, but i finally came back to it.
And boy, is she also back.
-New smoke effects for melee weapons.
-New puffs and proper casings for the Machinegun, Contingency, Thumper and Shotgun.
-Thumper, throwables and Machinegun can be switched before the reload animation.
New effects for the Flamethrower, throwables and MG grenades, and sounds for the Machinegun and Shotgun.
-New Contingency scope effect.

Update.
New Shotgun replacement, with a tighter spread and full-auto altfire, and a new Berserk spawn. Meet Charlie.
Charlie deals a load of damage, drains enemy health, and reduces them to giblets. Primary swings the chainsaw, secondary sticks the saw out. 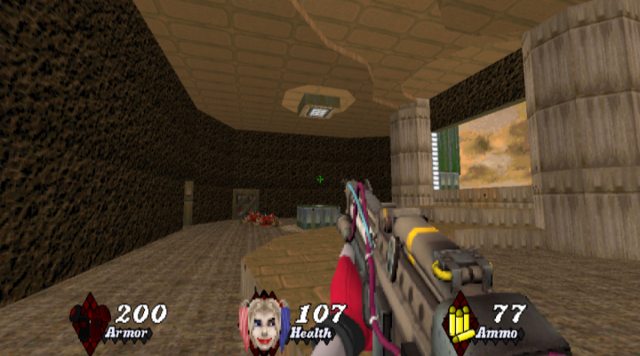 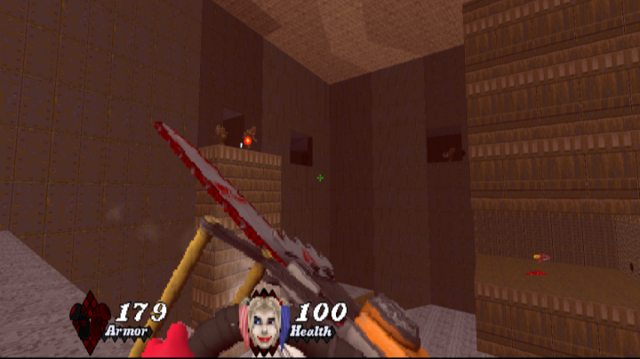 Update time.
Fixed some clashing issues and a gamebreaking bug with Bertha and Charlie, paired the Haste powerup with doubled firing speed, rebalanced the Machinegun's ammo, and added some new effects for the Squirtgun's alt.

Update#2: Added a taunt for the Bat, and fixed a sound issue with the chainsaw.
Enjoy.
Top

it's funny but. i tried this mod out with WolfenDoom. and by some miracle. it basically worked better than any other gameplay mod i tried to combine with it. only issues per say was that. Harley could use the MP40 from the mod. and the Wolfenstein enemies drop ammo only for that. everything else is luckily place by the map maker
Top
45 posts