Discuss anything ZDoom-related that doesn't fall into one of the other categories.
37517 posts

osjclatchford wrote:the magnum issue is the angle of the drum against the angle of the protuding shells thats creating the playdough/meatgrinder effect.
the drum is remaining stationary but the shells start dropping the second the protrude, which is physically impossible, thus making them look soft or jellified...
the drum should pitch angle up with the shells movement in the animation...

also the middle screw of the drum is moving with the shells too , which it shouldn't, making it all look like a salvador dali painting...


actually, that "middle screw" is the extractor that pushes the shells out, it's how a good chunk of revolvers work
here's a helpful image that shows how it works, click on it for a video

that aside, i realize now that this is getting very off topic so, here! a speed loader for your empty cylinders

Cardinal with her wings opened

Cardinal Wings.png
Cardinal Wings big.png
You do not have the required permissions to view the files attached to this post.
Top

Oh my god those wings for some reason immediately reminded me of Stellar 7.

The emblem for the player's tank (The Raven) looks a lot like that in terms of stylishness.

What is she going to do to the player in your mod?
Top

I made some more stuff! Sorry, once again.

Wolf3d style medkits, in a few colour variants (Also berserk pack, the classical orange soviet medkits, and Pizzas), some obsolete storage mediums, junk food, a chainsaw (no one needed another chainsaw, but I did it anyway), a few mythological weapons (a better shaded version of the Spear of Destiny I did for BoA, Excalibur and Mjolnir), chonky radios and reworked stuff I did years ago (jerry cans, mystical tomes and keys)

Oh, and the Megapunk zone.

Now, you may rightfully ask "what the heck is a megapunk"? Well, see, it's like decopunk, but instead of art deco, it's the Megadrive (Genesis if you're based in the US, though Genepunk sounds like - and probably is now that I think of it - something completely different, and Genesispunk sounds even worse. Like, with Phil Collins?). With the two most megapunk guns I could think of, the G11 and Zip-22. (it's a bit oversized, because pixels, so let's pretend it's an upsized, higher calibre Zip-22, so, like a Zip-45 or something... of course, it's not a Zip in Megapunk world, it's a Justifer, and, yes, I have put far too much thought into this). 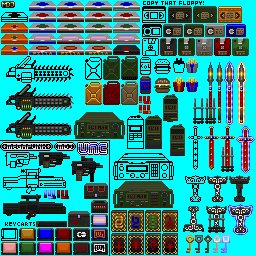 (Ugh, I just noticed a moved some things around to fit in the shotgun shells, and put the G11 magazine too close to the label for the keycarts...)
Top

really like those VHS/betamax/floppy sprites. Those are super cool.
Top

Let's crouch walk properly Mm'Kay?
You do not have the required permissions to view the files attached to this post.
Top

What is she going to do to the player in your mod?

The Cardinal (Pinky replacement) has the ability to open her wings and go into a flight mode. When flying, she is unable to attack and moves slower. If I can find a way to do it, I want her to only be able to enter flight mode in open areas and not in compact halls.
Top

quake2 style stimpack in doom flavour:
htina0.png
You do not have the required permissions to view the files attached to this post.
Top

Made some palm/coconut trees sprites. Feel free to use as you see fit.

ah very tight rendering, those look like something they could be in a game like Outrun. I was surprised how bright and effective the doom palette seemed on them, then realized the greens are in fact brighter than usual! Tweaked palettes are always fun, though it might be worth providing a version in the regular palette, assuming it is analogous with this one, in case anyone does indeed want to use those trees.

no i just checked, those are much nicer than the outrun trees. I suppose the technology didn't quite exist in the mid 1980s to do something like that. Maybe if Power Drift had palm trees.
Top

Heya! Let's walk!
You do not have the required permissions to view the files attached to this post.
Top

I've made my first ever spriteset! Referencing from your default doomguy spriteset, I have done my take on Caroline from Viscerafest! 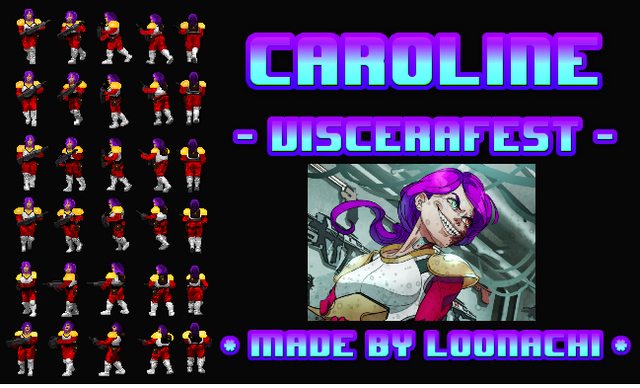 Sprites dont have her halfface feature

the shoulder pads yellow should be tone down. The are glowing bright now.
Top

Ak sprite prototype after taking my time to learn spriting.