Added a second link that has a launcher-compat version. Figured a lot of people are probably going to ask me how to install the thing, and constantly having to tell the lot to use a different launcher would probably bite me in the caboose long term. Note that the second link doesn't have the defaulter, since it's useless with BoA being run as a standalone game instead of a Doom PWAD.
Top

I love this idea. The M1 Thompson is one of my favorite weapons and it's an eyebrow raiser to not have it in a WW2 game, for sure. Glad to see you bringing classics back through the Confiscated Weapons Mod. Did you know Medal of Honor: Underground had almost no Allied weapons as well?
Top

Quick question, how would I go about adding Use-to-Pickup into the game? BOA has its own "efficiency" add-on which seems to do something similar, but the official add-ons seem to be giving me some weird errors, so I'm not sure if I can use that.
Top

I think I mentioned that I don't actually use BoA's launcher whenever I'm playing that mod. I just use ZDL and use my usual GZD setup.
It's a bit fiddly if you don't know how to set up such launchers, but the positives is that you can run any mod with universal compatibility and it'll work fine with BoA.

Like say for instance, DeusDoom and Corruption Cards. I think something like Flipper'll work as well? Basically a much more liberating system than using the launcher that requires any installed mods to specifically be made for BoA complete with launcher specifications.

- Kar98K now ejects casings in the middle of the bolt sequence instead of right when it fires.
- Tesla Cannon given new sounds, hopefully it'll fare better in the feedback category.
- Astrostein and Tesla weapons given zappy sounds for the dryfire instead of gunclicking.
Top

Added in Fliegerfaust sprites to replace the ROTT-based original. It's a bit of a hackery, since it's cobbled out of a Panzerfaust model (not the one in ConfisWeaps, a different one) whose meshes I just moved around and copied. Also recolored the grey skin it originally had to the one currently used. Can't find names attached to it, however, so I'm keeping the credits untampered for the moment until I find the proper author.

One can also find a new smaller addon in the non-launcher download. I can't be bothered to make such an insignificant addon on-site launcher compatible right now, so, only the separate off-site launcher folks could use this for the moment. It just gives a bra to the cake lady in Gotterdammerung and wipes the no-no bits from the bronze statues you occasionally see. No biggie, but could be useful for people recording BoA. 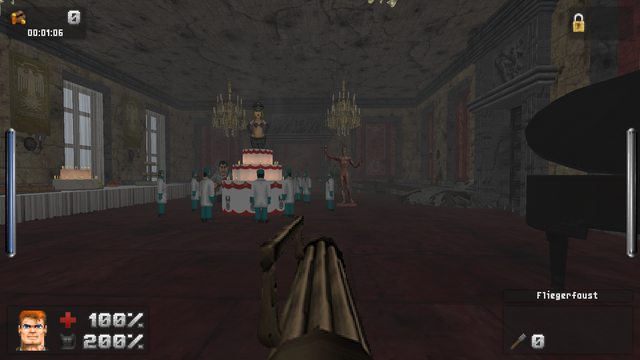