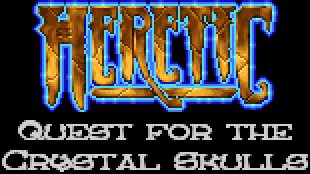 Quest for the Crystal Skulls is a new action-packed episode for Heretic.

In this adventure, Corvus is confronted by a Heresiarch, a powerful minion of the Serpent Riders. This dark wizard has stolen three crystal skulls,
using their power to open a portal to the underworld in the hopes of bringing about his master's return.

Corvus must collect the remaining six crystal skulls in order to unlock the celestial path and confront the Heresiarch before it's too late. 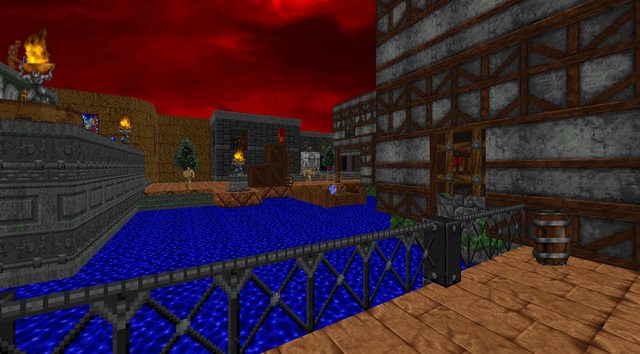 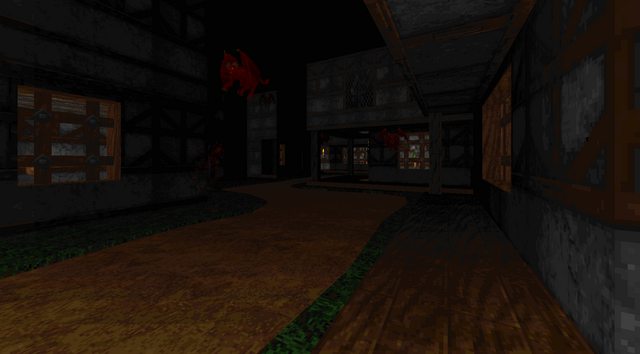 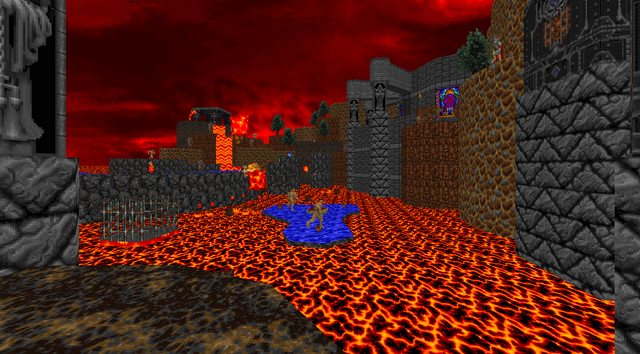 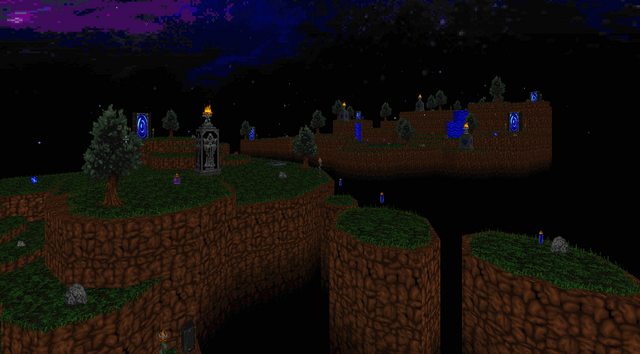 Shiiittt, another Heretic hub. Fantastic! Downloaded straight away - the screenshots are excellent.

I've played the first 3 levels as of this post. I have some small criticisms but overall I'm really loving it.

Layouts so far feel a little "constricting", for want of a better term, not space-wise, but in terms of flow. The maps are not linear but the crucial points of progression are definitely in a very strict order - not that this is bad in itself, but in a few instances it seems like the way forward is to go "the long way round", such as opening that small grey door on Umber Keep with a small switch that's in plain sight to begin with but is unreachable because Corvus can't jump 32 units to the island it's on. I feel it would be rewarding for the player if upon reaching these key locations, that the way opened up slightly to reduce backtracking - in the case of the aforementioned island, maybe lower it by a good 16 or 24 units once it's reached for the first time? The additional teleporter to the western section on Azure Canals is one such instance where this sort of thing is already done well. Any way that you can open up the layout across the maps like this would be more than welcome - or really, just any means of increasing interconnectivity across the layouts would be awesome.

Lifts in general could also do with being better telegraphed - I realise that the texture you've gone for is consistently used here, and is certainly used for lifts in the original, but one or two did not appear to be lifts on the first few glances. The two at the north in Azure Canals didn't appear to be useable objects on a cursory inspection (the midtexture used on their front sides had me fooled for a sec) and the one at the south in Umber Keep felt especially tucked away.

I feel like I've hit a snag on Azure Canals. The trigger line to lower that teleporter to the south is on a remote ledge that can't be accessed... unless you teleport to that ledge via that same teleporter. Is this a design oversight? That same ledge has the crucial switch that raises platforms to the blue door where the crystal skull is found. 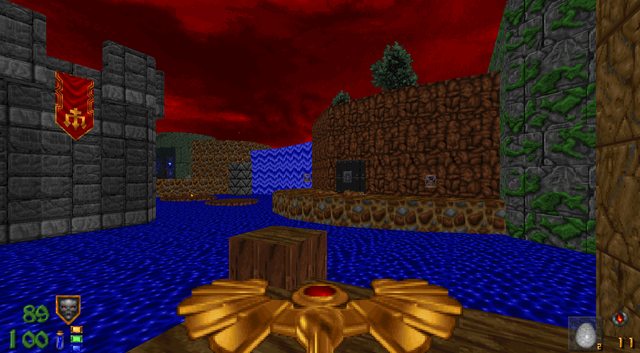 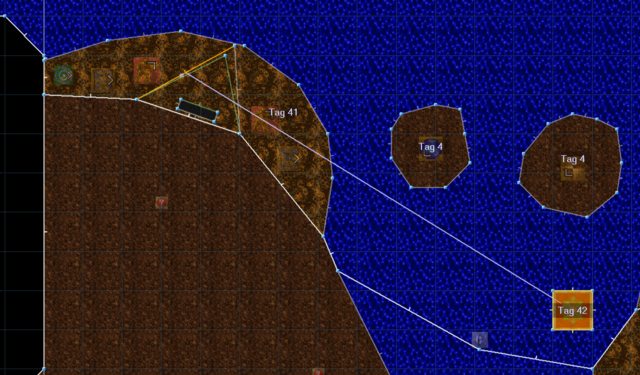 So far I'm loving it. Always welcome a Heretic set with a bit more intrigue and novelty to it. The Bjorn Lynne midis are also a fab touch.

And well done for starting the set on a boat. For some reason that's one of my favorite tropes.

Hi Jimmy thanks for the feedback. Yes adding a few more shortcuts is probably a good idea, I'll keep that in mind.

Regarding the bit your stuck at... try pushing the pods round the corner.

Mmmm, I don't think anyone is going to intuit that at first. Even if someone thinks to do it, it's one of those roundabout ways forward that is gonna feel more like deliberate map breakage than anything.

I understand that you have another pod-based puzzle in a later map, but I feel like that puzzle is the far easier and more straightforward of these two.

If you were to introduce the (cool and novel!) idea of pods as a platforming utility earlier on in the set (perhaps in the first level?), and maybe move those pods to just behind that gate that you open with the switch in the western building - and definitely make that gate an Open Stay - there'd be less issue. You could even use textures to denote that "pods belong here" - I recommend these ones from Neoworm's Hexen Decoration Pack PK3.

While I'm here, "Crystal" is misspelled in the episode menu as "Crytal".

Jimmy thanks for the tips - I have fixed the silly typo and have reworked Azure Canals slightly regarding pods. There are now pod 'vines' on the walls where pods are to be used as platforms, and the area below now serves as a demo section for the player. The gate now opens permanently as suggested, among other changes. 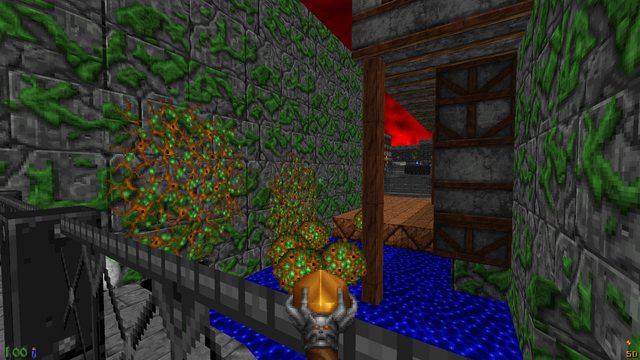 I have also made the stone door on Umber Keep open permanently too so the player only needs to land on the island once.

I will post a new beta in the near future once I have some more things fixed.
Top

I also made a seamless texture from heretic pods. It's in the Hexen decoration pack I made. And I can some custom ones to fit your project if you want.
Top

Thanks for the offer Neoworm. I should be ok for now, however I'm definitely going to check out this decoration pack.
Top

I finally finished the level set (well except for a boss, he got me ten times and I gave up for the time being) and I love it.

I don't really have any problem with level flow neither with puzzles. I really liked that the gameplay was so varied, every level had some nice puzzle/area that forced player to think and strategize. My favourite is the jumping on ice platforms over the lava and the whole crypt level. Using the pods as bridges is also super awesome idea.
And the secret level - why aren't there more levels like that for Heretic? It's almost a slaughter level number of monsters that can really puch player to the edge, but it's still managable and not overdone as some slaugther levels tends to be. Pretty much only similar maps for Heretic are later levels in Wayfarer and those were kinda boring to me - levels were too large, combat was dragging too much.

The two new monsters are really good additions for Heretic and spice up the map set just enough to make it special. Red disciple is so simple yet brings a lot. Sepents looks really well and are creepy in how they are used. I could do some more animations for their head to make them little more alive (these are from Powerslave, aren't they?)

And there are some iron bars in the first room of secret level that have no collisions, seems like a bug.
Top

Thanks for the glowing feedback Neoworm. i'm glad you enjoyed it.

some iron bars in the first room of secret level that have no collisions, seems like a bug.


Sepents looks really well and are creepy in how they are used. I could do some more animations for their head to make them little more alive (these are from Powerslave, aren't they?)

Yes the snake is from Powerslave, recoloured to match the Heretic palette. Originally I wanted to make a flying Chaos Serpent boss like a Chinese dragon, but I couldn't get the head to look right so I ended up just using the stock one. If you want to make some animations for the head then I would really appreciate that.

I must sadly join neoworm in being unable to beat the boss. His more-than-a-dozen attacks are hard to memorise and there's barely any cover from them, and the arena kind of fills with lesser monsters a little too fast. 10000 hp is probably way too much for him considering he can make himself invulnerable for prolonged periods, so I'd suggest knocking his base health down to about half that. Consider that the standard Heresiarch only had 5000 and even then I think that was way too much.
Top

He has 6000 HP, but yeah you're right. I have reduced it to 5000 and made it less aggressive to give players a larger attack window.

I find the tomed DragonClaw is good for stun-locking him.

Thanks! Yeah sorry, I was only pulling the figure from memory there.

I finished beta1 today. Apart from other things mentioned already, something else irked me: the first 6 maps or so are very easy, even on UV. I was practically drowning in ammo and armor most of the time and didn't even bother to use items. It got a bit harder in the later maps, but they were still rather easy. But then suddenly came the super-tough final boss who can reflect shots. He was so tough that in the end, I just blasted him with cheats.

BTW, it is possible to turn the new uber-wizards into chickens and thus save lots of ammo. Is that intentional?

Edit: I found the secret level and it was... fun, but ultimately disappointing. I expected some kind of worthwhile reward (another invunerability to help with the final boss, for example), but I actually ended up with less Tomes than I entered. Oh well.