These bugs do plan to be resolved, when they can be.

You can check that theory by checking if (pc == sfunc->Code) and error out if it is.
Top

Yep. Turns out there's a similar line that does the same in VM calls. Putting it on both makes it spit out many of those errors.
Gonna push a fix for that.

I also cannot say anything about the address zero error, because I haven't got any since I first started testing. I've been using debug builds, and it may be possible that the error only happens in release builds for some reason. I will test release builds too, when I have the time.
Top

You generally can't use debug builds to test for errors that may be caused by uninitialized variables. The debug C runtime clears all data with 0xcd when allocating and 0xfe when freeing it, which effectively means an uninitialized variable might no longer get the value that can trigger the bug.
Top

OK, I'll see if I can get it to trigger with a release build tonight.
Top 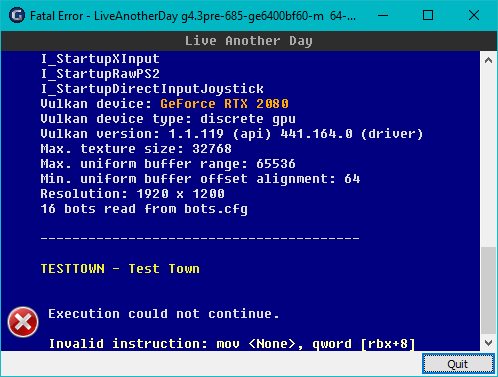 As expected. Like I said before, this one's most likely a bug in the AsmJit library itself

Release build testing results:
So, regardless of what Nash says, I'd say this is fixed... at least for me. Maybe Nash's project has something that triggers a bug in some other place of GZDoom source (like phantombeta said, could be the asmjit library).

It is also interesting that all address zero errors seemed to have the same stack trace this time. Unfortunately, I couldn't get the exact stack trace again - I was running GZDoom with +logfile, but none of the errors appeared in my logs (this may be yet another bug). I only know the errors happened because I set my script to take a screenshot of GZDoom's window in case of a crash (I couldn't leave GZDoom windows open because my laptop could've run out of memory).
Top
23 posts

Return to “On Hold Bugs”