Using PerK's original state table waaaaay back from 2013 - https://www.doomworld.com/forum/topic/4 ... nt=1145287 - seems to make the Pistol look and feel like vanilla, with animation and sounds in sync.
Top

Maybe I will take that for another attempt to create a version with fast switching.

Anyway, my plan for a last ultimate version was to also be able to choose 100% vanilla (unsmoothed) weapons and vanilla weapons with fast switching. Nevander had released a project doing that and I made some improvements to that recently. Then the mod should really have something for everyone.
Top

Any plans to add bullet casings? As an option maybe to not rage purists

I wanna try the ZScript one.
Top

I also think there is little need to add any additional functions. Right now it's about restoring/verifying 100% vanilla firing behavior.
Top

Looking forward to the next release.
Top 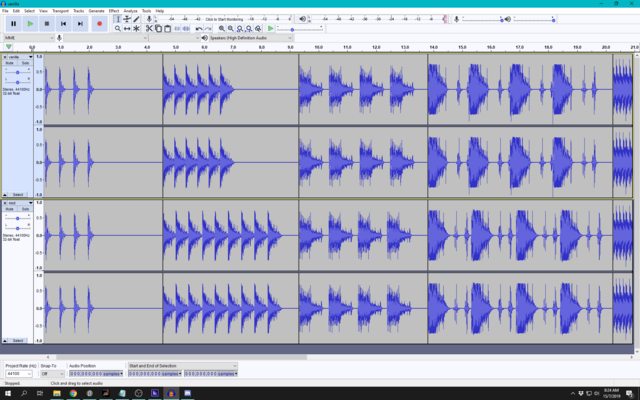 I decided to compare fire-repeat speeds of unmodded VS this mod v2.0 (not my ZScript conversion) using audio. Two separate recording sessions. I would hold down the Fire button for every weapon, and then in the audio editor, I would place both recordings to start at the EXACT same spot.

My method of placing the clips is at maximum zoom and at the sample level, so both recordings start PRECISELY at the same spot, with sample-level accuracy. You can't possibly get more precise than that. To further confirm that both recordings are sample-precise, I would flip the phase of one of the recordings - upon doing this, the audio became completely silent due to phase cancellation - therefore confirming that the start times of both recordings were 100% identical.

Phase cancellation is a common technique in audio engineering to check if two pieces of audio are 100% identical.

Here are my findings:

Here's a visual explanation of the super shotgun: 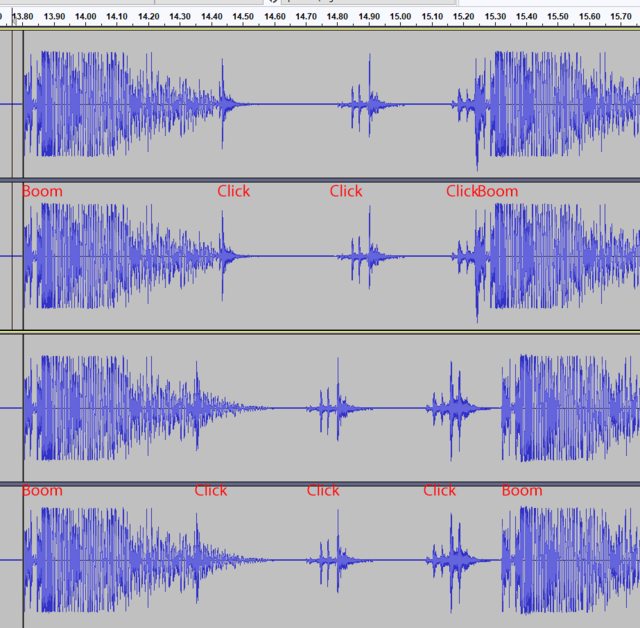 Conclusion: while my findings aren't exactly helpful because I basically provide no data that would translate to the state tick durations you'd need, what I can at least confirm is that yes, there are differences, and I have rough estimations of the differences (whether something is too early or too late) - this is much more useful than "uhhh I think there's differences, maybe" - the waveforms here do confirm that YES, there are differences. :)

And I have at least narrowed down which of the weapons actually need work.
Last edited by Nash on Tue Jul 16, 2019 5:19 pm, edited 1 time in total.
Top

After a few hours of work, and with audio waveform checking as explained in the previous post, I have fixed all of the weapons' state durations to last exactly like they do in vanilla/unmodded.

Every weapon now behaves exactly like they did in vanilla.

ALSO, I fixed a bug with the plasma rifle. In v2.0 of your mod, holding down the plasma rifle fire and then releasing the button immediately would create 3 shots. In vanilla, it would only create 2. I have fixed this so now it behaves exactly like vanilla.

I have also added some extra features which I personally am interested in. Here is currently a full list of differences between PerK's Smooth Weapons Enhanced v2.0, and my version:

- Fully converted to ZScript. Among the benefits of this include no duplicate states and less code spaghetti as decision-making is a LOT easier to do in ZScript.
- No more player classes. Another benefit of ZScript is I am now able to change the weapon sprites on-the-fly with relative ease.
- Options menu added to toggle the following features: black gloves, left/right-handedness for the pistol and fist (new!), gloveless fist like in vanilla (new!), fast weapon switching, more responsive firing, smooth projectile explosion (rocket and BFG)
- All weapons have been re-timed to be exactly like in vanilla. Precision-checked by comparing sound wave forms. All bugs and differences are fixed (SSG too fast, plasma rifle 3-shot bug, etc), the weapons are now vanilla-accurate.

One final note is, unfortunately I feel like adding unsmoothed weapons kind of defeats the purpose of the mod and it will make the code a little bloated (both DECORATE or ZScript even), so I don't think I will be adding that in. People who want unsmoothed weapons should probably play without mods...

At this point, I feel like my little mod of your mod is feature-complete, it has everything that I personally would want it to have. I am just waiting for you to give the OK to release it. :)
Top

Looks like you have done everything that was on my to-do list. Great and thorough analysis of the flawed weapons. Cheers, mate!

However, as I had mentioned before, I am currently on vacation and unable to access any computer to check this out. I'd like to take at least a look before publishing this, especially since it would most likely be the final version. I won't be back before July 29 and I am not sure if you guys can hold on for that long. I would still highly appreciate it if you did.
Top

NightFright wrote:Looks like you have done everything that was on my to-do list. Great and thorough analysis of the flawed weapons. Cheers, mate!

However, as I had mentioned before, I am currently on vacation and unable to access any computer to check this out. I'd like to take at least a look before publishing this, especially since it would most likely be the final version. I won't be back before July 29 and I am not sure if you guys can hold on for that long. I would still highly appreciate it if you did.

No problem; I'm not in a rush to release anything. Actually, now I have just discovered a problem... my stuff breaks horribly with sv_fastweapons. :P I'm not sure how to fix this yet. Might take a while...
Top

Update:
I will be back on July 29, so if you have found a solution to the sv_fastweapons problem, you can send me a PM with a link to your adjusted version till then. I would probably not make any adjustments if it's just a conversion to zscript plus fixes for weapons fire.
Last edited by NightFright on Wed Jul 24, 2019 12:47 pm, edited 1 time in total.
Top

I don't know about sv_fastweapons, but PowerDoubleFiringSpeed works by dividing every frame's tic duration by 2, with the minimum being a duration of 1, to avoid locking up the engine I presume. For instance, the aforementioned powerup has a greater effect on vanilla weapons than Smooth Doom's, even though both (should) have the same total tic duration.

Edit: Tested v2.0 with PowerDoubleFiringSpeed and sv_fastweapons 1. The pistol, when compared to vanilla, is sped up, but not as fast. The smooth chaingun is not affected at all in both cases. When using the fast switch classes, the weapons take the default time to lower and raise instead of double and they constantly flicker while doing so.
Top

No worries everyone, I fixed everything and have been playing this since I last posted. I think I'm pretty much done, although I'd probably want to fine-tweak the animation for the shotgun and super shotgun a little more, I feel like it's still kinda not quite there yet. As in, the total tics last the same as vanilla, but the animation speeds could be fine-tuned to look better.

NightFright, I will send you a PM to my mod. I have a feeling it may have grown a little too big though... I don't know, you be the judge.
Top

Grand. Btw, if you feel like zscripting my adaptation of DTD's fullscreen statusbar (the one with splitscreen mode) - if it's even possible and a conversion makes any sense at all -, feel free to do so. It's quite finished and I wouldn't know how to improve it any further except for dropping the sbarinfo approach. I really need to get into zscripting by myself one of these days.

One way or the other, even w/o having seen the results yet, your assistance in getting this fully fixed is highly appreciated.
Top
334 posts