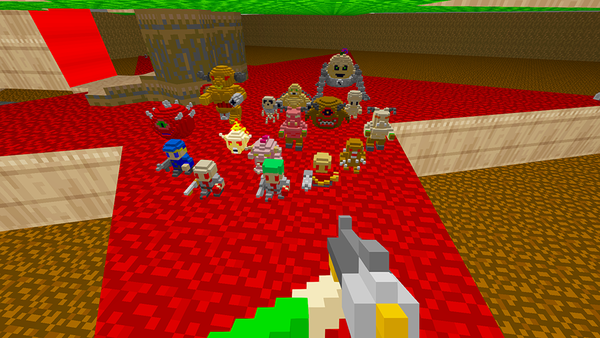 What is this?
A graphic mod for Doom & Doom II which replaces enemies and items with voxel objects in the chibi style of 3D Dot Game Heroes (Playstation 3 game). All voxel models were done with MagicaVoxel.

New in version 5: What's actually in the mod?
All items and enemies that can be found in the regular Doom and Doom II campaigns. Decorations have also been converted. Some monsters may move a tiny bit slower or faster than in the original games, but you probably wouldn't notice it.
Enemies will explode into colorful little cubes when hit and killed, and flash white when damaged, like an old arcade game.

Chibi style?!?
For those who don't know, chibi is a visual style reminiscent of Japanese RPGs of the 80s and 90s from the 8 and 16 bit eras of videogames. Characters have overly large heads, often as big as the rest of their bodies. The reason for this is partially found in the technical limitations of the era, particularly screen resolution. In order to show a decent amount of the gameworld (often from an overhead or 3/4th perspective, like Legend of Zelda: A Link to the Past), characters had to be drawn rather small which in turn meant that were they to fit on 16x16 pixel tiles (a very common tile size), artists had to find a way to make them stand out and let the player differentiate between them by their most prominent features, which would be their heads. So, the heads were increased in size, leading to a "cutesy" style that has become very popular.

3D Dot Game Heroes?
3DDGH is a Playstation 3 game that came out a few years ago. It is basically a love letter to Legend of Zelda, Secret of Mana and similar games. It's graphic style is highly influenced by these titles but presents it's world in 3d using voxel objects, hence the "3D Dot" part in the title. The artists did an excellent job with the graphics and they were the perfect base for my own character conversions. 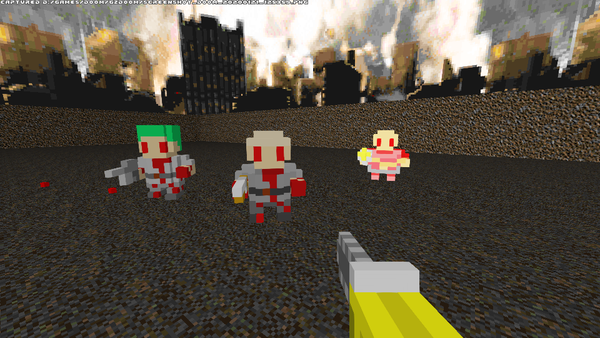 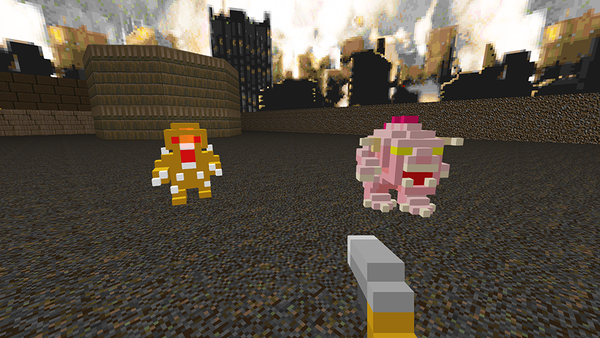 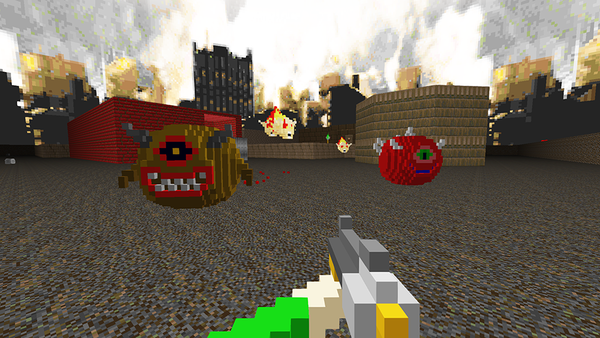 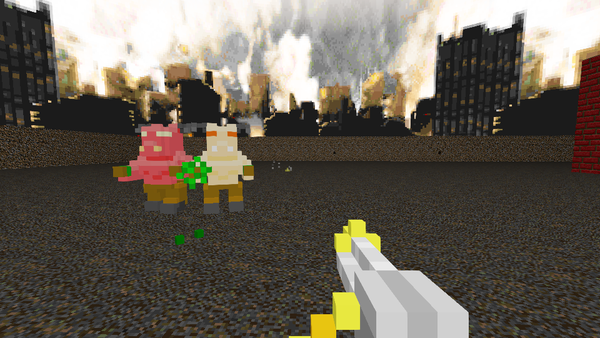 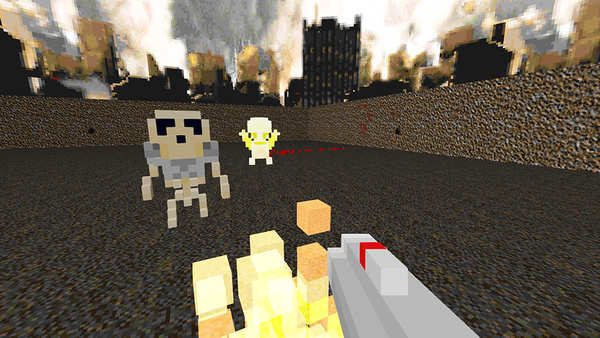 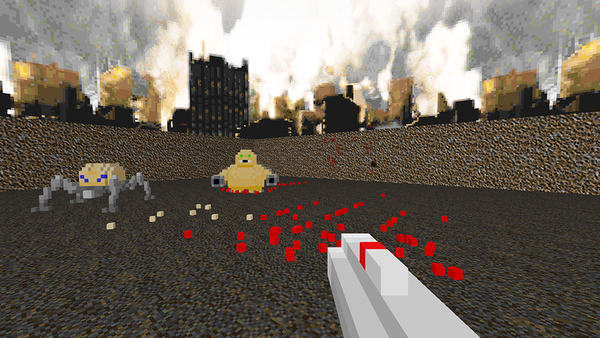 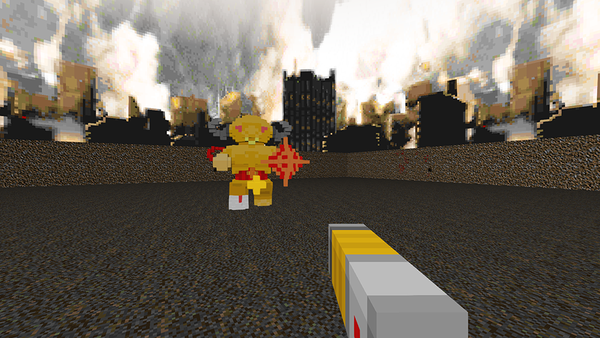 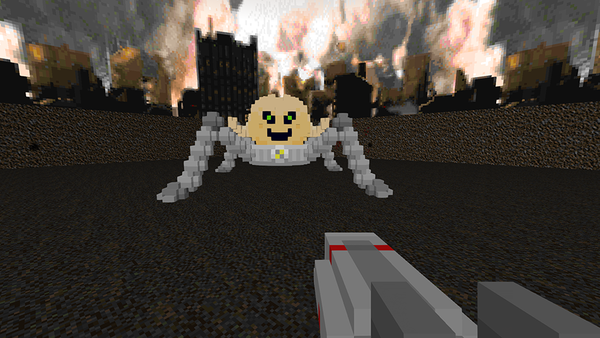 
If you decide to use any low-res mod, I suggest turning off advanced graphical features and things like texture filtering!
Last edited by Cherno on Mon May 03, 2021 3:08 am, edited 39 times in total.
Top

First peice of advice, when you upload your mod check to make sure its the actual mod and not your launching bat file
Top

Thanks! I fixed it.
Top

I like it, very charming and super neat. Hope to see the rest of the enemies/ bfg and plasma gun at some point

Holy shit, this actually looks decent in a lo-fi way. If you could downsample the level textures to look like blocky 32x32 textures, that'd gel the entire aesthetics even more.
Top

Looks cute af, shame the colors look a bit flat. Adding some darker variation on the parts like under the arms, inner thigh, below chins, etc would help if you ask me.

Do the weapons have to be angled? Doom always looked good with centred weapons if you ask me.
Top

Nash wrote:Holy shit, this actually looks decent in a lo-fi way. If you could downsample the level textures to look like blocky 32x32 textures, that'd gel the entire aesthetics even more.

I thought about that. It would certainly help with giving a more unified look between the voxels and environment. However, more than simple downsizing is required; bold colors and an altogether different art style is needed.


Voros wrote:Looks cute af, shame the colors look a bit flat. Adding some darker variation on the parts like under the arms, inner thigh, below chins, etc would help if you ask me.

I agree about the flatness of the colors. It looks so much better in 3DDGH but that's a completely different engine and those tiny normal maps that bring out every single voxel help a lot. Faking ambient occlusions isn't easy because a voxel can only have one color; it's not possible to have, say, the sides which lie below the arm a darker shade and the front brighter.

I considered centering the weapons but decided against it because the rather abstract way the voxel weapons look, I was afraid that they wouldn't be recognizeable at all were they to be centered. The shotgun would be just a thick white and grey strip, for example.

In the meantime, I finished the Cacodemon and next up is the Lost Soul.
Top 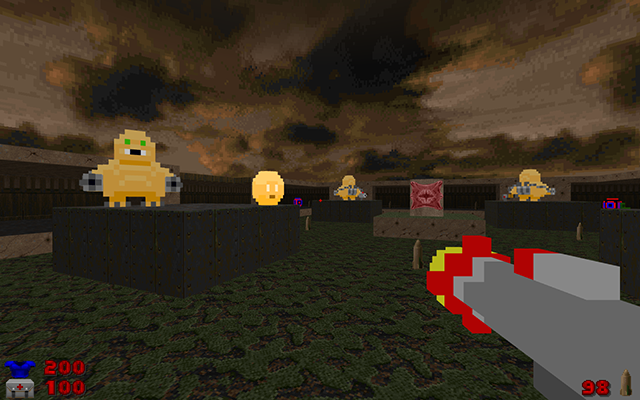 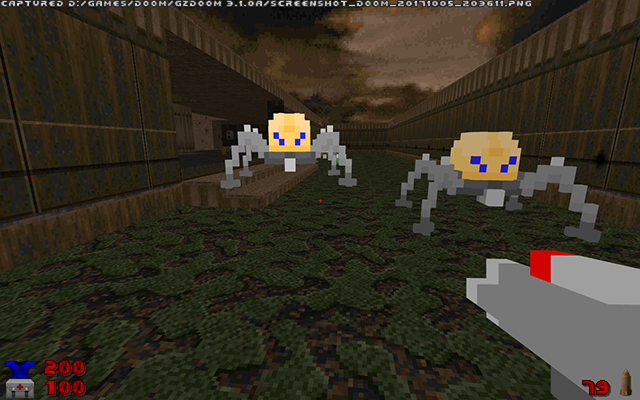 Arachnotron fighting against a Revenant: 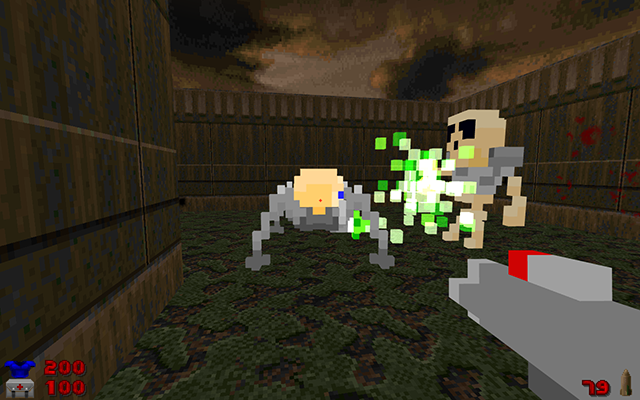 My personal favorites, Cacodemon and Pain Elemental (plus some Lost Souls): All hail the flying angry tomato! 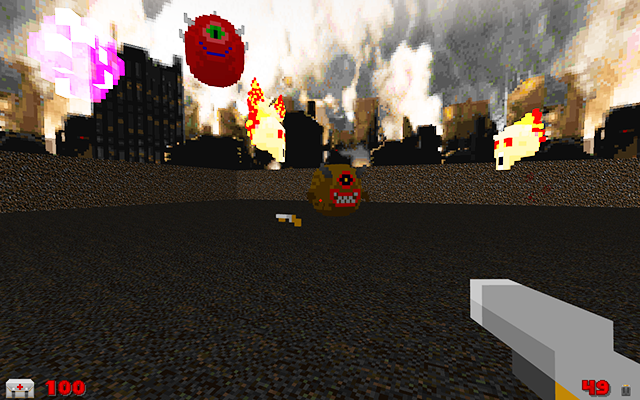 Looks less flat, better than before.

Dat smile though :)
You do not have the required permissions to view the files attached to this post.
Top 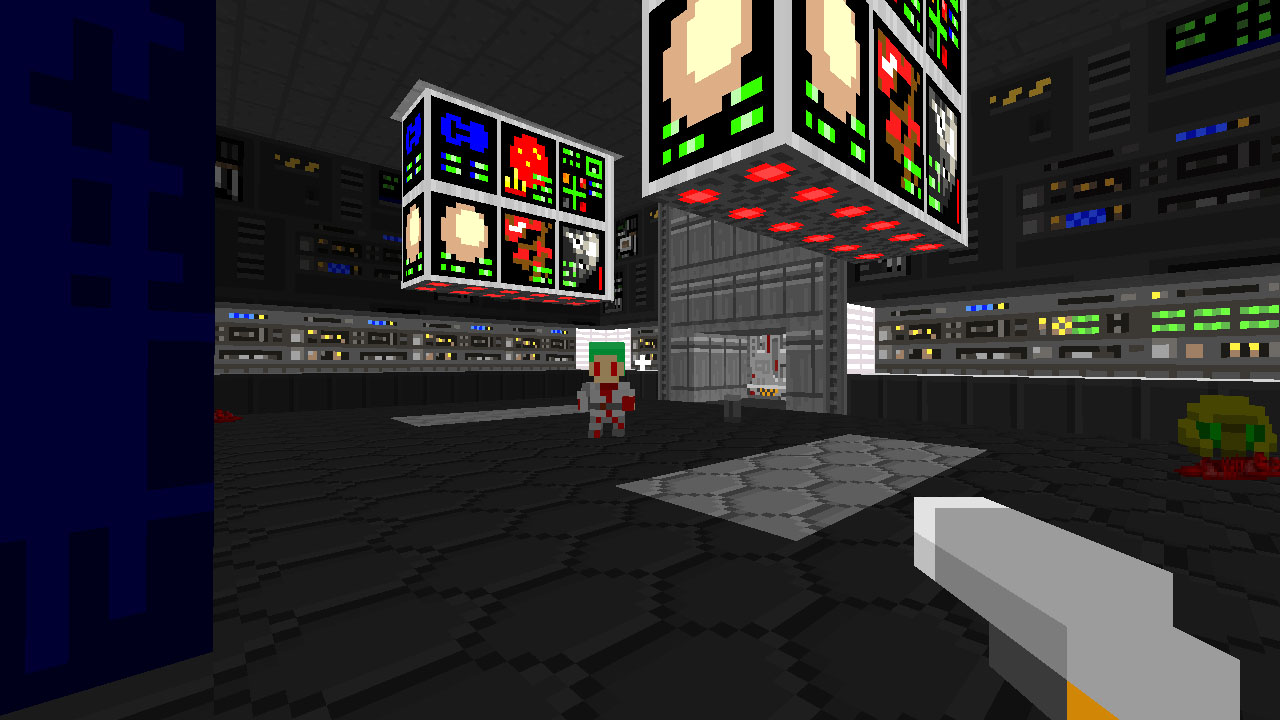 The textures came out great! I wouldn't have thought that this would work this well at all. did you just downscale them or did you have to edit some? The computer panels in particular show a surprising amount of detail even at this scale. 3D Dot Game Heroes uses a 1:2 pixel ratio for it's terrain (1 terrain voxel texture per 2 object voxels).

May I'll try my hand at a complete style change of the textures and environment so it looks like a weird cross between Legend of Zelda and Doom.
Top

Cherno wrote:did you just downscale them or did you have to edit some?

1:2 looks better with your models: 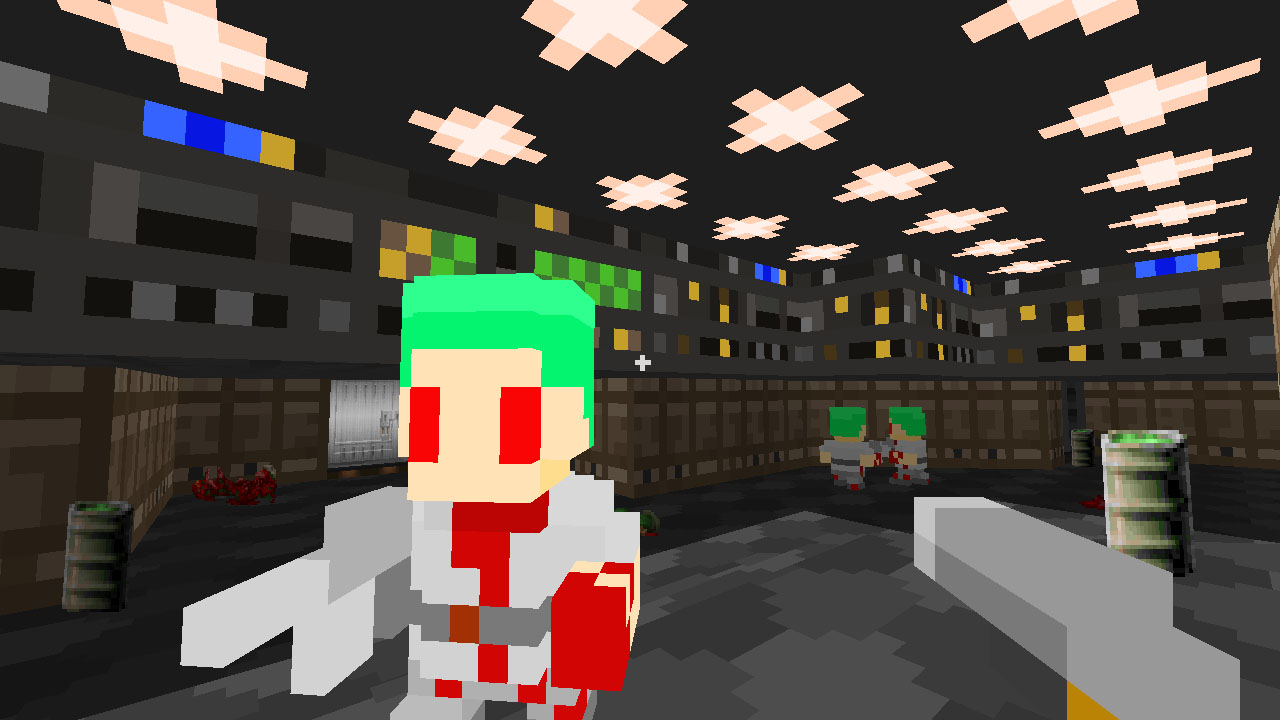 Honestly, while the "chibi" style isn't my cup of tea, I can appreciate the effort that has gone into this; it's still quite interesting to see Doom and Doom 2 with a new set of 3D assets. As for the texturing, it also looks interesting, and I was about to try my own hand at it, but I realise I don't need to. I still will though, just because I still can. I also do feel as though there is something off about the texturing, I'm just not sure what though. As negative as that may be; keep going, it is still perfectly good work and it would be great to see it to its completion, if not for everyone else, then for your own pride.
Top

This is adorable. Keep up the good work!

Thank you. I have started working on some decorations like toxic waste barrels and blood pools.

I also wonder, is it possible to change the blood decals that appear on the walls in GZDoom?
Top
80 posts