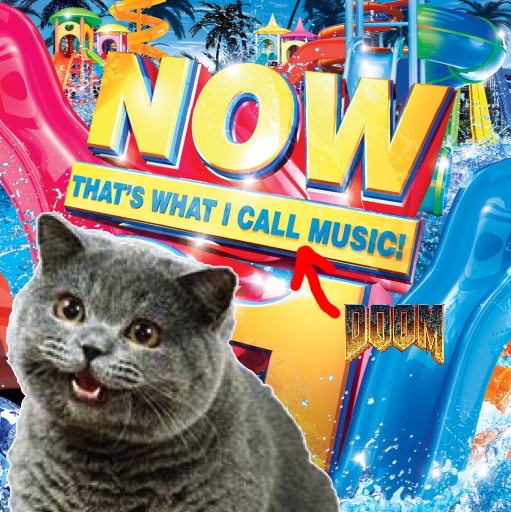 Alright, so long story short: I put together a simple collection of zip files, and each one contains a collection of wads that can be used to replace the music in Doom, Doom 2, Final Doom, Heretic, and Hexen with remixes, re-arrangements, and updated scores from various artists. A more comprehensive list of the whos and whats can be found below. But first, the download links.

This is actually a revival of a five-year-old thread and mini-project of mine, of the same concept. I just figured it'd be better to actually make a new thread since it's been so long. Hopefully this'll be the first step in me returning to modding, if only on and off.

Usage
A lot of you probably already know enough to figure this out, but I'd like to point out that these wads can be loaded up together in different arrangements in order to get different combinations of music. So, if you set it up to load the Sycraft Doom wad first and then the Classic Doom 3 wad after that, the Classic Doom 3 songs will take precedence over the Sycraft music for the Doom episode 1 stage themes, but the rest of the songs (intro, intermission, etc) will still be replaced by the Sycraft versions. This is useful for filling in the gaps if you're using one of the "spottier" packs.

A note: Plutonia's music is weird inside of the Plutonia WAD. It uses music from both Doom and Doom 2, but has the tracks all shuffled around, and then renamed to Doom 2 track names to get them to play on the right levels, in a hacky sort of way. Which is really confusing to try and adjust for when putting these music packs together. As such, I've only got Classic Doom 3, Perkristian, and Sycraft set up to work with Plutonia. The list of tracks used and name conversions are attached in the text file here.
track info.txt
Another note: The TNT music was actually originally set up by the people who made TNT to replace the Doom 2 music. So, if you load up a TNT wad/pk3, it'll replace all the Doom 2 music anywhere it's used.

Future?
Well, this might just be step one for this project. I could add some more music on suggestion, or maybe granularize the options more, since some of these zips are pretty big. A potential direction I could go in, is to create some kind of actual in-game interface for setting different mixers/arrangers to different stages. I'm not sure how I'd lay it out, though, or what features it should have. Suggestions on any of these points are welcome. I'm honestly not sure if I should tag this thread with [RELEASE] or {WIP] or what...

Disclaimer
I should probably explicitly state this: I simply found all this music and put it all into wads. I do not claim ownership over any of the actual music, nor do I claim that I created any of it. So there.

Xeotroid - Doom - Doom 2 - Heretic - Hexen
A pretty comprehensive list of updates from Mr. Xeotroid. His own music thread can be found here. The style seems to be a pretty straightforward "upgrade" approach, so it's good if you just want more modern versions of songs.

Lorcan - Doom 2 - TNT
Here we have a more liberal take on the TNT soundtrack, which was created for Risen3D and Doomsday. This pack seemed to also contain Doom 2 tracks, so I divided them out into a separate pk3. For the full experience, load the Doom 2 pack, followed by the TNT pack.

Sycraft - Doom - Doom 2 - Plutonia - TNT - Heretic - Hexen
Pretty much every track from every game was upgraded by Sycraft, who's website may be found here. This is a good overall upgrade to the music, though for the most part individual songs don't quite stack up to any counterparts that might be in the other packs, barring maybe the Paul set depending on your preferences.

Paul - Doom - Doom 2
A fairly comprehensive set created when this Paul fellow ran the original midi through a better soundfont and made some tweaks. He used to have a website, but it doesn't appear to exist anymore. This set covers all of the doom music excluding the title screen, and most of the doom 2 music excluding Map 23, Map 25, Map 28, Map 30, Map 31, and Map 32.

Zora - Doom - Doom 2 - TNT
Though the quality here isn't much better than Midi, Zora actually did do actual remixes of a lot of the music, with a lot more focus on fast guitars, so even the slower and more atmospheric tracks are changed into more energetic versions with this set, which some people might like. I put together the mp3s on his website, but you can also grab a pack of midi versions here if you scroll to the bottom.

This set is missing the intro screen songs, though that's no terrible loss really.

Ashley Carr - Doom - Doom 2
Ashley Carr, otherwise known as dj redlight (website here) brings us this slightly more liberal interpretation of the soundtrack. Definitely a good balance between a straight update and Dark Side of Phobos. Also, it's made to loop properly.

This set is missing the intro screen songs.

Kinkiness - Doom - Doom 2
Similar to Ashley Carr's work, this brings us a set of songs that deviate a bit from the original soundtrack's feel, but is still perfectly suitable for doomin' it up. Visit his almost painfully minimalistic website here.

Perkristian - Doom - Doom 2 - Plutonia
This artist has created some pretty stunning rearranged versions of various tracks from Doom and Doom 2. His website may be found here. This set doesn't replace every single song, unfortunately, though it does replace quite a few. These are the tracks that get replaced:

Perkristian also made a wad of hi quality sound effects for the Doom games. Check it out here. Also be sure to check out his smooth weapon animations.

Sonic Clang/Thumpmonk (Classic Doom 3) - Doom - Plutonia
A lot of you probably already know about this music. Easily some of the most badass Doom rearrangements out there, though unfortunately only spans the stage themes of the first episode of Doom, so it's usage is fairly limited. Might be good for a play through KDiZD though! Of course, keep in mind that some of the episode one songs are also used in episodes two and three, so you can wring a little bit more longevity out of this.

I took these into Audacity and edited them to actually loop properly, for the most part.

The Dark Side of Phobos - Doom
Here we have the big Doom remix project from the folks over at OCRemix. Of all the packs, this one is by far the most liberal interpretation of the Doom soundtrack out there, which shouldn't come as a surprise to anybody familiar with how OCRemix typically operates. This means that you're in for a completely different feel to Doom if you use this pack. Also, being tracks intended for an album rather than a game, they aren't exactly loop-friendly. I can't promise I'll ever be able to "fix" that since they simply weren't intended for looping.

You do not have the required permissions to view the files attached to this post.
Last edited by Darlos on Sat Jul 16, 2022 5:46 pm, edited 15 times in total.
Top

Hey, if you want, you can add my covers there, too.

Xeotroid wrote:Hey, if you want, you can add my covers there, too.

Oh yeah, I saw your thread when I was looking to see if somebody else had done this already. I'll throw them in.
Top

Neurological made a couple of remixes of both Doom 1 and Doom 2's music, under the album name (i think it's an album name, anyway?) Hell On Earth Sound. links to all of the MP3s seems to be down since i can't find the website they had anymore, but i do have all of the MP3s on my harddrive, i think, which i can upload to somewhere.

you may also want to add Lorcan's TNT remixes to the list. it replaces the entire TNT soundtrack with his remixes, and they're all excellent. you can get them from either Risen3D's website or Doomsday Engine's site.
Top

Great idea, thank you! Sometimes it's really hard to track down some of the better remixes.
Top

Cool, great suggestions people. I shall actually get right to work on it.


Viscra Maelstrom wrote:Neurological made a couple of remixes of both Doom 1 and Doom 2's music, under the album name (i think it's an album name, anyway?) Hell On Earth Sound. links to all of the MP3s seems to be down since i can't find the website they had anymore, but i do have all of the MP3s on my harddrive, i think, which i can upload to somewhere.

you may also want to add Lorcan's TNT remixes to the list. it replaces the entire TNT soundtrack with his remixes, and they're all excellent. you can get them from either Risen3D's website or Doomsday Engine's site.

If you can get those Neurological tracks to me some how, that'd be fantastic.
Top

oh yeah, Mazedude's remixed a couple of Doom songs too, most famously what, in my opinion, is the best remix of Opening to Hell i have ever heard in my life, and his OCRemix contribution of Into Sandy's City. not all of his music appears to be free, but Opening as well as Countdown to Death seems to be freely available on his site, and Gothic Sandy is up on OCRemix. the style of music is usually a very heavy industrial take on the original songs, but it doesn't really deviate from the original to make it unrecognizable. it's definitely worth a listen. he also contributed to OCRemix's Delta-Q-Delta remix album of Doom 2 it seems.
Top

Updated with a separate Plutonia pack, because those tracks are set up in a special way. If people were downloading these packs for Plutonia, then they've gotten the wrong arrangement of songs for almost seven years!