Here's a simple little informative gameplay mod I thought up while working on my Wumpus game because I was working with map markers there.

How many times does this happen to you: You see a health/armor/ammo drop but you're too full to take it so yo plan to come back for it later. Later when you need it you're thinking, "Ok, where were all those drops I skipped?" You can mark them on your map with the built-in markers, but you only get 10 of them, and they're just numbers, you have to remember which number marks which loot, and you can't clear a single one off without clearing them all.
Also: You find a locked door, you think you remember seeing the key somewhere - did you forget to pick it up? Where was that?

Here is Loot Markers. It is a mod that automatically marks loot drops on your map and clears them when you pick it up.

Tested with Doom/2, Heretic, Hexen, Chex, Strife, and a handful of add-ons. Shouldn't conflict with other mods because it's pretty simple. 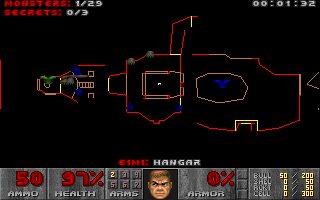 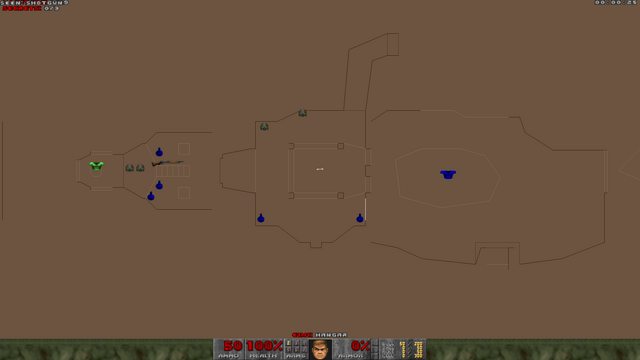 All inventory items are automatically marked. If you want to mark other things, for example the exploding barrels, or evil eyes for playing Sigil, or if another mod with chests or crates or merchants or other things you want to mark, just put a comma separated list of items in the language files like so:
AddLootMarkerTo="ExplosiveBarrel,EvilEye"; EDIT: removed in favor of LOOTMARK lump
This list is case sensitive, not because of my code but because the dynamic array find() function seems to be case sensitive. So if your items aren't being marked, be sure that the case matches how the item is coded.

Download it here and check map MARKTEST to see how things are marked.

UPDATE 2022/07/15
For the modders and power users: a new lump called LOOTMARK contains a list of rules to tell which items get automatically marked or not. Details in this post.
Because of this the AddLootMarkerTo and DontAddLootMarkerTo in the LANGUAGE lump are no longer processed. All rules should be placed in the LOOTMARK lump.
For the casual users: Added ability to manually mark or unmark items from the map. Hold the mark key (default M) and put the cursor on the item you want marked or removed. Details in this post
Last edited by Sir Robin on Sun Jul 17, 2022 6:09 pm, edited 3 times in total.
Top

This was something I always wanted in Doom, since the simple 0-9 markers are so simple and limited, in that you can't individually toggle number markers on or off with a matching numerical keybind. Thanks for this!
Top

I admit, this is one of those things I didn't know I needed until I got to try it. Cheers.

I have to ask, though; what I'd like to be able to do is have my own mod provide a list of classes that any user will get drawn on their map if they load both this mod and my mod. Something like a LOOTMARK lump that I can just put class names into.

I have code lying around that does something similar already, if it would be useful.
Top

Abba Zabba wrote:This was something I always wanted in Doom, since the simple 0-9 markers are so simple and limited, in that you can't individually toggle number markers on or off with a matching numerical keybind. Thanks for this!

Lots of times when I finish a level, I want to run back through and top-off my health, armor, ammo, etc., but can't always remember where I "left" everything. So I'll do an IDDTx2 with actors set to draw sprites, but that's a cheat because it will show me stuff I haven't officially found yet. So I wanted a non-cheat version of that and so I wrote this. Glad you like it.
Top

TheRatCircus wrote:I have to ask, though; what I'd like to be able to do is have my own mod provide a list of classes that any user will get drawn on their map if they load both this mod and my mod. Something like a LOOTMARK lump that I can just put class names into.

You can already do that. Just put a line like this in the LANGUAGE lump:
AddLootMarkerTo="ExplosiveBarrel,EvilEye";
In that list you can put classes, tags, or inheritance classes. So if you put "actor" in there it would show everything.

You can see that in the file I linked, there is a map called MARKTEST. Load that up, look at the objects on the conveyer belt. See there is an explosive barrel and an evil eye but they don't show up on the map. Now open the LANGUAGE lump and uncomment the line and run the map again. You'll see the barrel and eye on the map now.
Top

But I can only replace that string, right? I would have to put in those two classes in addition to anything I wanted to add, and then if another mod got loaded later in the file order that also replaced it, any changes I make would be overriden.
Top

TheRatCircus wrote:But I can only replace that string, right? I would have to put in those two classes in addition to anything I wanted to add, and then if another mod got loaded later in the file order that also replaced it, any changes I make would be overriden.

Ah, I see what you mean. I can't think of an easy way to accumulate a list instead of replace it. Even if it loaded the list from a special LOOTMARK lump, that could also be replaced by a later loading mod.
Top

It's simple enough to do. Here:

Console output is as follows:

Just take out the extra console logging and you're good to go. It even supports blank lines and single-line comments, though you could just as well take that out too.
Top

Awesome. I'll have a look. Meanwhile I've been working on an exclude list. I've got an idea for allowing each successive mod to add include and exclude rules to a list. I'll incorporate your successive lump reader into that and post it when I've got it working.
Top

TLDR: I made some changes hardly noticeable to the typical user but very convenient to modders

So I added an exclude list along side the include list. The way it worked is that first the actor is checked for the include list, and if found, is checked for the exclude list. This works on a basic level, but if for example one mod excludes a certain class, then a later mod creates a subclass and wants it included, it can't do that. So now instead of two lists there is a list of rules each rule is checked for each spawned thing. A later rule can override an earlier one, so a later loading mod can override an earlier one's rules.

Sound complicated? It's not. Start with inventory, I want to mark all inventory items. But I don't really like blur spheres, I don't want those marked. But there's this mod with a subclass of the blur sphere that I do like, and I want that one marked. My LOOTMARK lump could look like this:

Inventory is actually included by default, no need to include that in the file, I just did that for a demo.
Also, MapMarker is hard-coded as an exclude, and can never be included. That prevents markers from marking markers marking markers infinitely.

Thanks to the example posted by TheRatCircus, all versions of LOOTMARK are loaded chronologically instead of just the latest one.
The language file part has been removed entirely, all rules are sourced in LOOTMARK lumps.

I'll update the first post when I've have more time to test this.
Top

I wrote a system for the user to choose items to mark on the map, pretty slick if I do say so myself. In testing it works in the stock iwads but breaks several mods - One I've noticed so far are High Noon Drifter, Action Doom, and Hocus Pocus. Not sure why but I'll look into it.
Top

New feature I'm working on: User-markable objects. Any pick-ups (inventory items) are already marked on the map by default, but what if the user wants some other item marked? For example some NPC to talk to?

Take for example a game like Strife. You find this NPC: 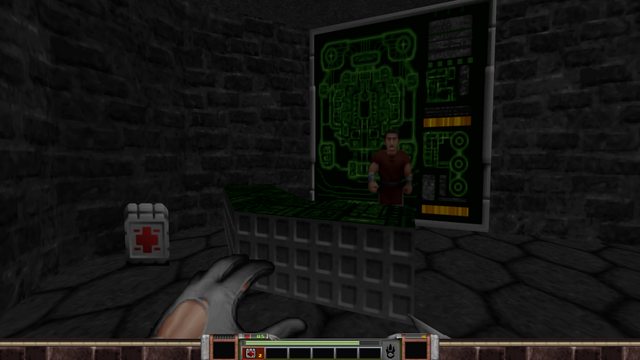 You press and hold the marker key (default M) and get the blue marker cursor: 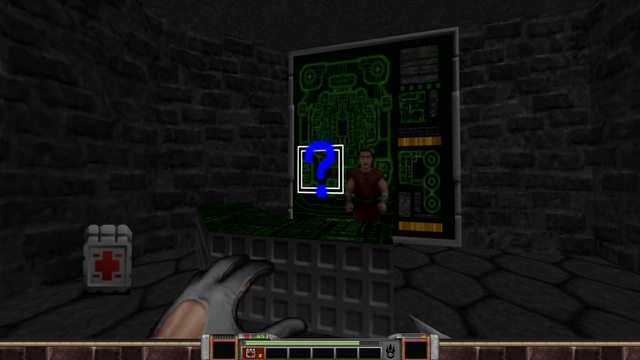 You move your view so that the cursor is on the item you want to mark, and the blue cursor turns green and the item has a green box around it: 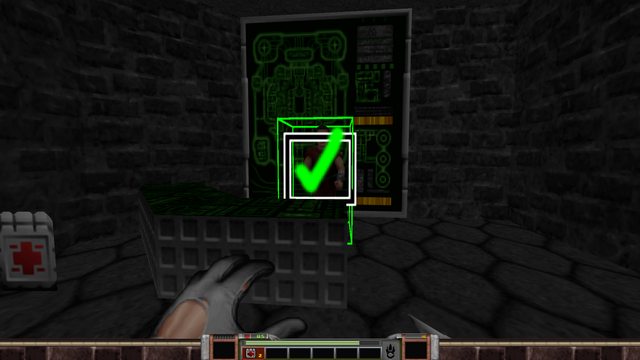 Now you let go of the marker key, and check your map. Sure enough, there he is: 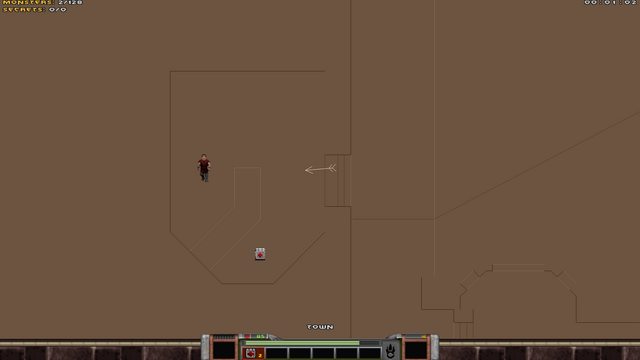 But what if you decide he isn't really all that important and you don't want him on your map after all? No problem, hold the M key again, look at the item you want off the map, and the cursor will change to a red mark and the item will have a red frame around it: 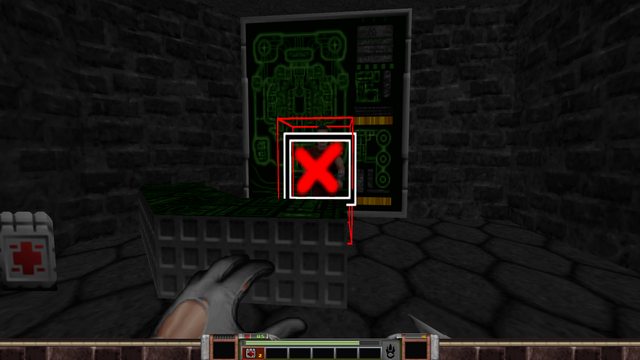 Release the marker key and the marker is removed and he is no longer on your map.
Top

Ooh cool feature, I would like to see that added.
Top

Hmm... Not sure what you been doing with it since you made that version, because I downloaded it from the link, tried this in the latest GZDoom and it gives me this error trying to run this, even alone it gives me at least only these handful of errors:

Execution could not continue.