Cacodemon. Tomato, Strawberry, Kekos... In my opinion this is the most charismatic monster from all original doom bestiary. He is always smiling, even when catching rocket with his... face? In game he can be very tricky just because of his flying ability. So i decided to make mod where all monsters are replaced by their "caco-analogs", with abilities that somehow can describe their originals. And sometimes there is something that compensates original monsters weakness. They all have the same health and painchance as original monsters, just for balance and mod flexibility - i'll talk about it later. The mod's name means "Round", "Spherical" in Russian language)

For example: Zombieman has low health and low damage. What can compensate this? Speed or size.

First concept of this mod: All monsters look like the same. Really? No more! Krooglyi 2.0 is a total rework of questionable concept. Now each "Krooglyi" has unique design, almost each projectiles have unique design and sounds.

The second concept is: Expect the unexpectable! All monsters have multiple attacks, everytime you can encounter new enemy's ability. Also there are already few surprises, from funny to a little annoying ones. But there will be more, cause this is just a WIP.

The third concept is: Active gameplay. No hitscans! Except the player's weapons and only one monster's attack. You should run around, dodge, jump, crouch - and you can escape from every enemy attack if you will be tricky enough.

The fourth concept is: Flexibility. You can combine this mod with any weapon pack or even some gameplay mods - it has been tested with "Highway to Hell", "High Noon Drifter", "Demon Hearts - Baron" and "Ultra-Crispy".

Here's some screenshots. But they aren't too informative, better play this mod and try it for yourself) 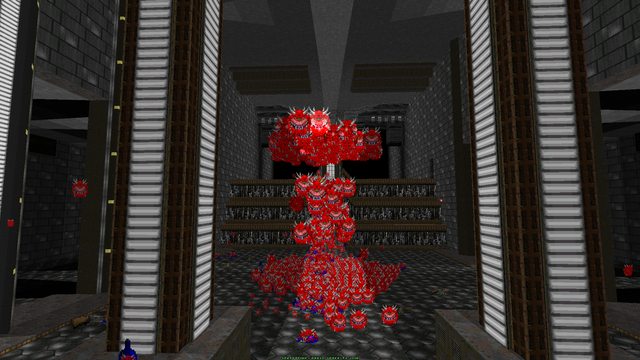 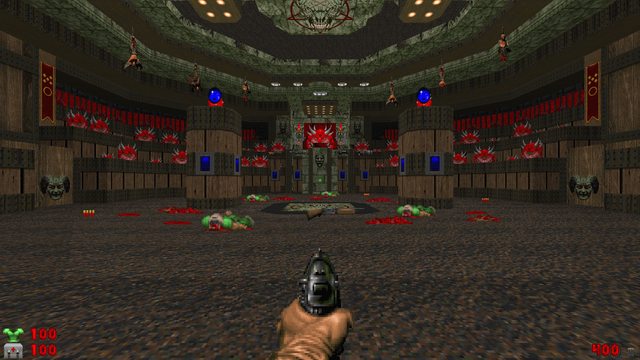 Most of the mod features shown in the video, but here is few of them:

1. Unique design for monsters - so you can easily identify origin of every cacodemon - especially for mancubus.
2. Enchanced environment - this isn't just hell or UAC base now - this is the "KEK" world. "KEK" for "kekodemon"
3. Everything wants to trick you - now you can be surprised with... almost anything (and this is still WIP)
4. Unique final boss, working on most "icon" map - three-phased badass with unique attacks, catchy music and strategy to defeat.
5. If you find something - you can feel yourself like a GOD. The KEK-God.
6. Unspeakable atmosphere made of special design.

Don't be shy to leave some feedback, mates!)

Is this unofficial sequel to Fat Cacos?

Yep, they are cute)

No, I didn't know about that project, this is "independent" project, if seriously.) Well, you can try it for yourself. And expect the unexpectable)

Can you believe it? I've never seen this franchise? Untill you told me about it here)
Top

Sounds great. I can't wait to cross this zoo with some weird arsenal like abort_m or the spaghetti project.
Top

adski_drochila wrote:Sounds great. I can't wait to cross this zoo with some weird arsenal like abort_m or the spaghetti project.

Well, not exactly...) Krooglyi can sounds funny in English, if you are speaking it with right intonation. And it perfectly reflects the... "atmosphere"? You'll have opportunity to see this on future streams, he-he)

As for soulsphere - it's just "Ball of Health")
Top

My favourite series as a kid.

Play on the Japanese Community Pack "I love Caco" level for maximum enjoyment.

That said; it might be nice to have a version which also re-colours the cacos so that we can have equal opportunity for all kinds of fruit and veg. There's probably enough Caco variant sprites around to make it a thing.

Maybe cacophony would be a better name?
Top

Artman2004 wrote:Maybe cacophony would be a better name?

Haha, the double entrende (if you intended it) there is pretty awesome. Phony Caco's making a Cacophony.
Top

Artman2004 wrote:Maybe cacophony would be a better name?

There is already a map called Cacophony in 1 Monster Megawad, and guess what monster it is dedicated to.
Top

Well, here we go! Krooglyi-v1.1 is out now! Most of changelog can be a spoiler for gameplay and unique experience, but most important thing is optimizing stuff and fixing a lotta bugs.

Don't be shy to leave a feedback and\or bug reports if you'll find them.
Top

I can certainly say this cacophonous mod has left me in hissterics.