Overview
This mod aims to bring elements from Left 4 Dead 2 into Doom II. The aim was to provide a chaotic experience with hordes of infected and a framework to base custom maps on. Works with GZDoom 3.7.2 and 3.6.0.
Comp﻿atible with all gameplay mods that don't replace Doom 2 monsters (although there is a patch available for Brutal Doom). No weapons or items are included. Use this with your favorite weapon mod.﻿﻿

Features Misc. Notes
This mod was created with AI Director in mind. I highly recommend using it (load AI Director before L4D). Change the AI Director settings to your needs.
Some recommended settings (tested with Trailblazer): Group size 1-4, Spawn Rate 10.
Note that you need to change two lines of code in AI Director's zScript file in order to work with GZDoom 3.7.2, as detailed here:
Change line 195:

I also recommend using NashGore or Bolognese with this for those nice gore effects. In bolognese set the "Minimum health for gibbing" to -100, otherwise the zombies will gib too often on headshots.
Vanilla Doom weaponry will probably not get you very far, so by all means add your favorite weapon mod. A good melee weapon and an accurate hitscan gun are a must! Pop those heads! I have found Trailblazer to be excellent when dealing with the undead/infected hordes. 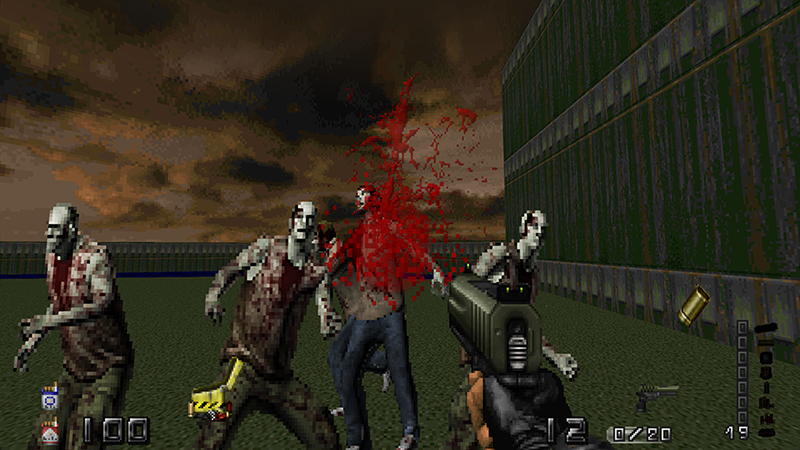 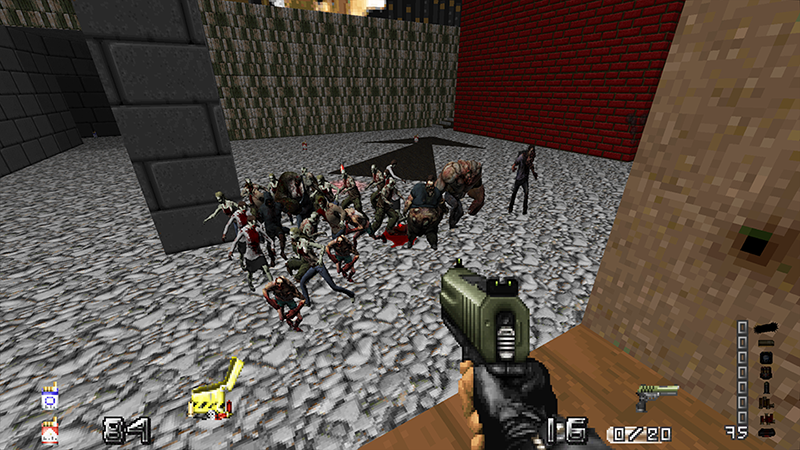 Development notes:
The infected use a muted color scheme so no single one stands out in a large mass. They should give the impression of a horde of mindless creatures with no individuality. This might clash with the more comic-book, pixel-art look of vanilla Doom.
Some special infected attacks are not suited for a single-player game, which is why the smoker's grappling and jockey's riding are not implemented. The solution is probably to make these temporary, like the Hunter's pouncing.
This was the first project for me that utilizes the power of zScript to any real degree. I am somewhat proud of the way I coded the common infected; as these all share the same code and are only different in their sprites, I wrote a base class for them and used GetSpriteIndex to set the right sprite graphic for each frame. This results in a fairly complex base class, but all variant subclasses only need a couple of codes after that (namely to set their sprite graphic names). Same goes for gibs.
The headbox system is also something I really like. It spawns a headbox actor as a child of the infected, and the infected's state set the hitbox' XYZ offset values. The hitbox actor sets it's position relative to it's master every tic based on these values. That meant having find the right offsets for each frame, though. One nuisance is that spawned projectiles will get blocked by the head hitbox often if they are not spawned far enough.

It would only be missing that this pack of enemies of the L4D make replace the enemies completely because there are mods where it does not replace that or that appear as the classic waves based on the L4D you know for so long time in the map the horde arrives because they try several mods and only in very few, the enemies L4D appear, apart very good mod! : D
Top

If I understand your correctly, your concern is that some mods that replace enemies cause problems because these will not be replaced by L4D monsters in turn. I think there is not much that can be done about this which is a shame because it prevents mods like Guncaster from being used with this. However, there is always the possibility of writing a simple patch that replaces the new monster classes (like the brutaldoom patch).
Top

This almost sounds like you drew inspiration from AEons of Death which also has (almost) all features from Left 4 Dead. Not that it matters! I'll give this a try soon, and it's looking nice so far!
Top

Funnily enough, I never looked at Aeons of Death and I only became aware of the connection yesterday

Now I will have to check it out

Granted, it's still in a bit of a bygone era where only Decorate existed. I have yet to redo it all and make it more consistent, but should you need any help with your AI, let me know. Making a customized variant of the director specifically for this won't be too difficult. After all, some tweaks will be needed to ensure monsters don't spawn in the wrong areas and what not. Will definitely be trying out the AI director in the first post.

Feel free to rip whatever resources you want from there, if you want. The sprites might not be much, but that's what happens when you keep a huge gameplay mod like that as small as possible. Code-wise, some of their behaviors are... somewhat basic. When my concentration returns to AEoD, it will be made better.
Top

I made a short video showcasing some of the enemies.

Looking good! Keep it up!
Top

This is a great start and I'm really excited to see it expanded upon, even if the sprites clash a lot with the doom aesthetic!
My one problem right now is that the sound design, of all things, could use some work. I can understand if it isn't a priority, but I recommend you get a tool to poke through VPK files and actually extract infected sounds from L4D2. It's easy to do, I even used charger voice clips for the pinkies in my own mod.
Top

Here are weapons from L4D2 but wont work with your mod but anyway, sprites looks really nice!
Top

Samarai1000 wrote:This is a great start and I'm really excited to see it expanded upon, even if the sprites clash a lot with the doom aesthetic!
My one problem right now is that the sound design, of all things, could use some work. I can understand if it isn't a priority, but I recommend you get a tool to poke through VPK files and actually extract infected sounds from L4D2. It's easy to do, I even used charger voice clips for the pinkies in my own mod.

Using sounds from Left 4 Dead would be no problem and I considered it but in the end decided against it because I don't want to use any assets from other parties if it can be avoided.
Top

Awww, but that's what makes them stand out! I mean, AEoD shamelessly uses them. You're free to use them too.

Not to mention they're of lower quality because we compressed them hard so they're not the original - all of them are mono tracked.
Top

I made another short video, this time using GutsRipper to try and hack through massive hordes of the infected in Map10: Refueling Base!
Also features Nash's gore mod and lots of head popping.

First of all, I like what I see. And a warm thank you from a big fan of L4D!
A quick thoughts:
- Why the Witch death sound not the one from L4D but the death sound from Blood's Gargoyle?

- Again, Spitter uses Blood's Bloated Butcher attack sound
- Tank should prefer melee over rock throwing attacks; and push a player far away with punches
- Smoker should pull player with his tongue
- Hunter should be able to climb walls and ceilings
etc etc I think you know all of these yourself (there are so many more features that'd be cool to have; I don't think you need a list of them), just need time to implement it all. Keep it up!
Top
36 posts