Dusted's Pandemonia is a gameplay mod that replaces pretty much all everything, in a classic randomizer fashion.
Inspired by mods like Scalliano's 667 Shuffle, Hard Doom, Complex Doom, and Colorful Hell, this mod aims to provide a new look on the old Realm 667 content you all know and might love, while also coming with its own unique enemies, weapons, items, and special effects.

Credits are included in the pk3 in a conveniently named CREDITS file.


Spoiler: Current Features
- All enemies are replaced
- Mostly all vanilla enemies are improved in some way, such as Spider Masterminds having high damaging projectile tracers
- A metric ton of new enemies, both original and adapted from Realm 667
- A progression system that affects enemy, item, and weapon spawns
- A scalable progression, you can decide how quickly your megawad playthrough can ramp up in difficulty
- No enemy hitscans
- Recolors
- Enemy spawner presets for wad compatibility (Scythe 2, Epic 2, and more)
- All weapons are replaced with smoothly animated versions, and mostly retain the same vanilla behavior
- New weapons such as the Auto Shotgun, Grenade Launcher, Nailgun, Dark Blaster, Railgun, and more!
- Heavy emphasis on flashy special effects
- Several new powerups, such as the Salvation Sphere, Doomsphere, Supersphere, and more
- Descriptive item pickup messages (such as armor telling you how much resistance it has)
- New HUD based off of BTSXHUD by Hexereticdoom
- Blood and gibs inspired by OG Nashgore, but highly edited with new sounds and custom blood colors
- Weapon sidegrades, randomly dropped by enemies that give your weapons new abilities
- A unique armor system with damage-type resistances and special abilities
- 6 different runes, randomly dropped from bosses (minus regular cyberdemon and mastermind) which greatly increase your power for the duration of one map
- Very strong durability weapons that break after using them too much! (but can be repaired!)
- Pursuer bosses; special enemies that will hunt you down throughout your playthrough
- Spawn events; special events that change the types of enemies that spawn (Dark Forces spawns dark enemies, Hard Mode spawns more difficult enemies, etc.)
- Dark Souls-like status effects 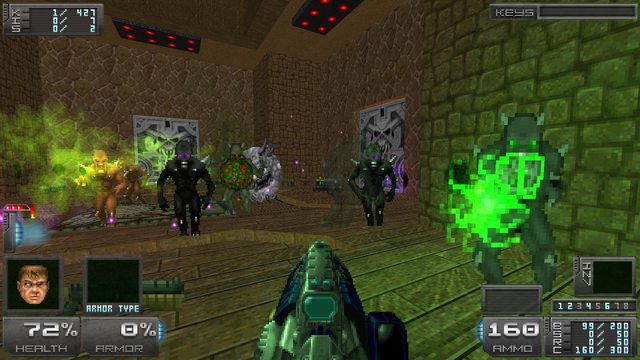 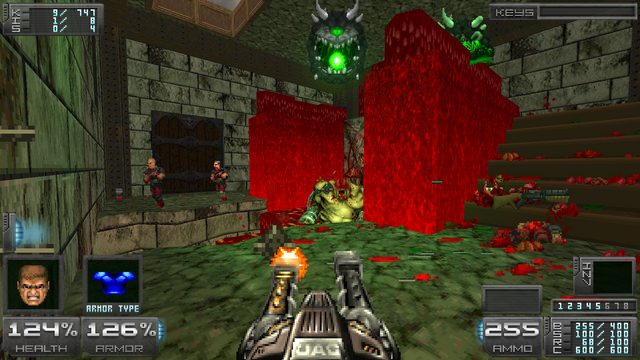 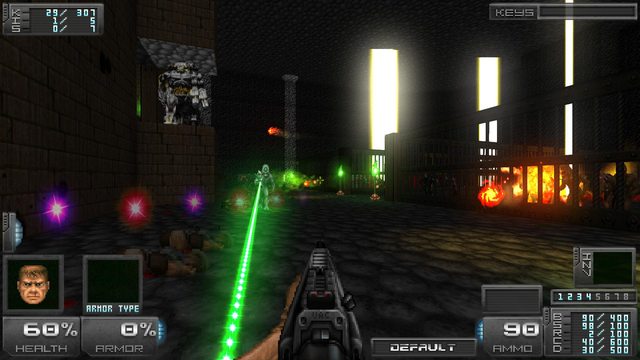 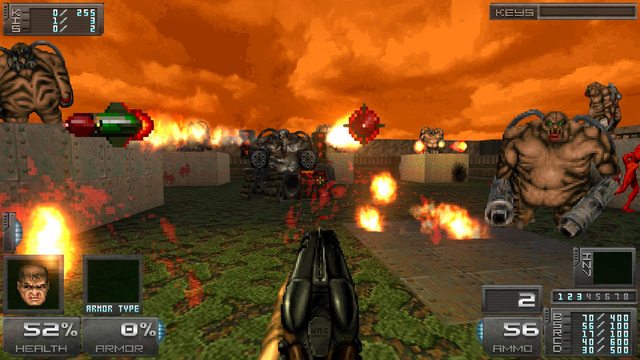 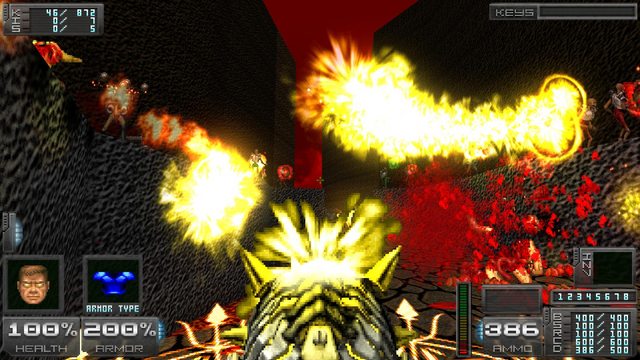 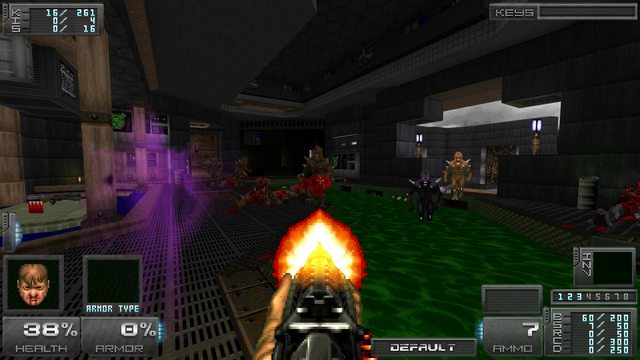 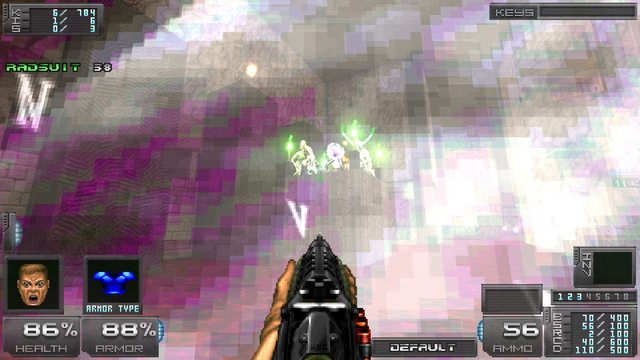 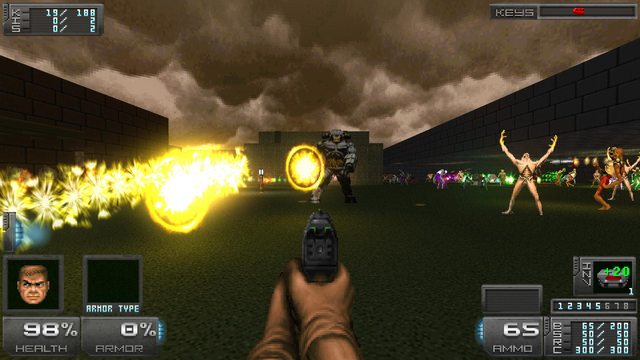 Spoiler: Addons
Pandemonia: Insurrection
Not yet released!
Complete overhaul of the weapon system; Instead of sidegrades, weapons have augments that increase their power. Sidegrades from base Pandemonia are instead turned into separate weapons. It's a lot easier to get stronger weapons, but as a result the progression ramps up a lot quicker by default. Will also include a large number of new weapons alongside a weapon limit.

Pandemonia: Anarchy
Not yet released!
Sort of a set of 2 addons: one is specifically for monsters for monster-only support, and the other is for new weapons and items. This addon is more centered towards content that I think would be fun, but wouldn't fit in base Pandemonia. Expect things that are weird, experimental, removed content, or simply things I don't want to bloat Pandemonia too much with.

Pandemonia: Renovation
Not yet released!
A decoration pack, will replace various object and decorations in maps with special ones. Will be customizable in the case of wads having their own custom decor or they replace certain decor actors in Dehacked.

PBR Liquids
Replaces vanilla Doom liquid flats with smoothly animated PBR textures; shoot something with dynamic lights over it, and gaze in awe!
This should be compatible with pretty much everything, even without Pandemonia.

It's good to see you back, dude!

The effects-work in this is really fancy, well done on that! The particle effects make everything look really sparkly, really adds a lot of shine to everything. The soundwork is especially crisp as well! I'm not suuuper familiar with Realm667 weapons, but it seems like you went the extra mile to make all the sounds different and snappy, and I like that a lot.
I'm not the biggest fan of randomizers, but I really love the extra work that went into polishing this up to make it stand out compared to all the others. Well done!
Top

Looking great dude.
Seems like you have spend time on every frame of it. Effects are looking good and smooth. The weapons are satisfactory to shoot.
At least It feels way different from randomizers. Gud work dude Holy creamy Christ on a cracker.

This is some good stuff. Feels great playing it and the effects fit well.

Can't wait to see more from this. Keep up the great work!
Top

From Complex addons to full on GZ functions is a big step, one that you took with a stride. No enemies feel blatantly unfair in most situations, and playing through most mid-level mapset (Stardate 20x7 on HMP, Plutonia 2, and Sunlust for me) felt very smooth. Not to mention that the work in the effects is more than worth the download alone. Looking forward to future releases.
Top

The mod is realy nice, its feels smooth and solid.
i am looking forward for next releases(hopefully there will be a chaingun, besides the assault rifle)
other than that its a great mod!
Top

I think supershotgun zombie is bit too nasty.
His attack is seriously dangerous because it can one-shot unarmored doomguy.
Well, his attack is only dangerous in close range, but some maps have a large amount of shotgun guys in very small area.
Top

happens to other projectiles
You do not have the required permissions to view the files attached to this post.
Top

Thanks everyone for your feedback!


namsan wrote:I think supershotgun zombie is bit too nasty.
His attack is seriously dangerous because it can one-shot unarmored doomguy.
Well, his attack is only dangerous in close range, but some maps have a large amount of shotgun guys in very small area.

SSG zombie is a bit strong indeed, but in most mods this type of enemy is usually a pretty nasty one. I'll try balancing out his accuracy and the amount of bullets he shoots in comparison to the actual gun (the regular shotgunner shoots 4 hitscans here, compared to the gun's 7).

I suppose you mean the effects spawning behind the projectile? I could fix that by doing some trigonometry stuff but I have little experience with that lol. For now it'll be like that until I can find a proper alternative.
Top

Added General Roasterock's video to the videos section of the first post!

In terms of upcoming content, I've been working on making some proper Cyber Hell Knight sprites, since the commonly used ones are extremely old recolors that don't match the hell knight very well.

The original sprites for comparison:

the horns and hooves aren't even brown either
Top

Better than that metallic one that's usually used.
Top

Are you going to include all the Eriance weapons? Like the Missile launcher, Gatling gun and the Machine gun

http://www.mediafire.com/file/dmjp1zp8w ... V2.0.0.pk3
I edited a little bit the last version of erigun just to change the Chainsaw and the fists, idk is this could be useful for you besides of the ammo counter effect in the plasma gun.
Top

NullWire wrote:Are you going to include all the Eriance weapons? Like the Missile launcher, Gatling gun and the Machine gun

The actual version 1.0 of Pandemonia has been released! The version number was going to be reserved for the first public release, but I forgot to change it. A ton of new features, fixes, and tweaks have been added, and the changelog will be included in the original post along with some screenshots of new content.


NullWire wrote:Are you going to include all the Eriance weapons? Like the Missile launcher, Gatling gun and the Machine gun

I might include the missile launcher at some point, but I dunno about the gatling gun or machine gun yet since there are already an assault rifle and minigun in Pandemonia with different sprites.
Top
129 posts