You thought it was dead. You thought this crap had been abandoned forever.

No such luck, I'm afraid. The mod that launched a thousand shady knockoffs and coined the term "Shuffle Mod" is BACK and EVEN MORE unbalanced than ever! More monsters! More items! More weapons than ever before! As if the original's squillion guns wasn't difficult enough to manage! 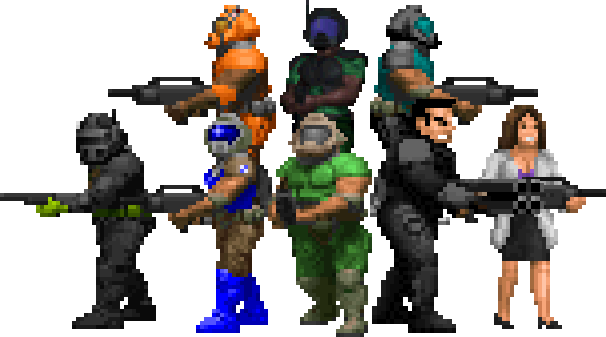 That's right, you spoke, we listened! Now you can enjoy all the fun of not having a clue what just 1-shotted you without the hassle of scrolling through two dozen weapons just to find the one you need!

And it doesn't end there - with Pure Mode comes the newest addition to the Shuffle compendium - PLAYER CLASSES! Now it's not just Doomguy on your side - sSS comes correct with not one, not two, but EIGHT characters, all with their own loadouts, some you may recognise from the mods from which they were unashamedly lifted!

Spoiler:
DOOM - id Software
Weapons - id Software
File - zzmwr2pure.pk3
The myth. The legend. The marine responsible for cleaning up the UAC's mess and saving humamity in the process. His arsenal needs as little introduction as he does.

CRASH - id Software, Virtue, Alice Jameson
Weapons - 3D Realms, Eriance, scalliano
File - zzmwr2crash.pk3
Doom's former training instructor and the woman responsible for teaching him everything he knows. As such, her arsenal is similar to his, but lighter and faster.

JOHN LOGAN - id Software, Rogue Entertainment, LoganMTM
Weapons - id Software, The Doom 2.5 Team, LoganMTM
File - zzmwr2logan.pk3
A genetically-engineered super-soldier, one of only four successful attempts in existence. The lone survivor of the UAC lunar catastrophe, thanks in no small part to his phenomenal self-healing ability. The biggest and toughest of the squad, but he's slow to switch out his weapons and suffers mobility issues when badly wounded. Not to mention his sheer size makes him an easy target.

SGT. ELLIOT MORSE - id Software, Rogue Entertainment, Pyroscourge
Weapons - 3D Realms, Gearbox Software, The Doom 2.5 Team, Pyroscourge, Pisstepank, Marty Kirra, zrrion the insect
File - zzmwr2nano.pk3
The operation in Siberia saw most of his platoon meet their end and led him into a face-to-face showdown with none other than Baphomet himself! Quick on the draw, his weapons feature insane knockback, but a feeble sidearm coupled with a lack of melee weapons means he can't stand still for too long.

DR. CAMERON SCOTT PhD - id Software, The Skulltag Team, DavidRaven, scalliano
Weapons - 3D Realms, The Doom 2.5 Team, Mike12, wildweasel, TheBadHustleX, Marty Kirra, Uboa, scalliano
File - zzmwr2cam.pk3
A theorectical physicist for the UAC and the only civilian to walk away from the Ceres incident, Cam has seen things that would give even the marines a stomach ache. Her experience with firearms is limited and she hasn't quite got the reloading down, meaning she needs to retreat and find cover more than the others.

PHOBOS - id Software, RottKing
Weapons - 3D Realms, Eriance
File - zzmwr2phobos.pk3
An experienced veteran, he got his name after leading the invasion of the demon-haunted tunnels of Phobos. There, he was betrayed by superiors who thought they could learn more from watching him die than by studying his reports. Now, he trusts no one and nothing except his training. A good thing, too, since his arsenal can be as deadly to him as anyone else.

BIOPHAGE UNIT 20-06B - id Software, Recurracy
Weapons - Xaser, NMN, Corrupt Marine, Scero, Shinjani, Xenophon, Caligari_78, Apothen, MasterOFDeath
File - zzmwr2zen.pk3
A cybernetic combat unit created by Zen Dynamics, one of the UAC's rival corporations. Kept in suspended animation at their Texas headquarters, he was awoken to find the entire facility overrun with Hell's finest. With an entire suite of unique weapons and alternate fire modes at his disposal, he's as tricky to master as he is badass.

LT. AARON WILLIAMS - Midway, Footman
Weapons - Midway, Footman
File - zzmwr2d64.pk3
When the Mars missions were resumed, Williams' squad was among the first sent up with only one objective - MERCILESS EXTERMINATION. His loadout is as balanced as Doom's, but during his mission he discovered a mysterious weapon forged in Hell itself, much more poweerful than anything the UAC could design...

Spoiler:
ZSCRIPT-COMATIBLE PORTS ONLY! If "execution could not continue", it's 'cos you're a div and you didn't read this bit.

The first, zzmwr2base.pk3, is the main guts of the mod and will run with any Doom2/TNT/Plutonia wad, compatible with vanilla or Boom. This is the only file you need for classic Shuffle! Simply load it last and you're gold!

The remaining files are for Pure mode and must be loaded AFTER zzmwr2base.pk3. ONLY ONE OF THESE MUST BE USED AT A TIME! Each contains a different character and playstyle. I'm working on a streamlined version with a player select menu, but that may take a while.

Also, don't use this with anything other than a ZScript-compatible port. Are we clear on that?

KNOWN ISSUES:
- MOD NO WORK WITH PRE 2.4.0 GZDOOM! CANNOT FIX!
- Metric fuckton of error messages on startup, I'm working on those.
- Classic statbar is broken for extra characters. Fullscreen HUD only for now.
- Morse doesn't have any crouch sprites yet, I'm working on those, too.
- Yes, having separate .pk3's for each character is weak, I know. A select screen is on the way.
- IDKFA gives all weapons even in Pure Mode. Thios will be fixed when the mod is restructred.
- Probably loads of others, but this is a lot for one guy to keep track of. Let me know any issues you find!

A full rundown of contents and credits are available in the enclosed ITINERARY.txt file. If I missed anyone, please let me know and accept my humble apologies.

So, without further ado ...

Cool! I remember you teasing something in the other Shuffle thread but I was expecting a release further in the future. Time to shuffle back into the fold

I appear to be unable to draw out all of the vanilla weapons, unless the current weapon I'm holding runs out of ammo.
Top

Yay more randomizers! It would be cool if you could separate the weapon and monster parts of the mod into separate packages so we can mix and match these with other mods, too.
Top

Ribo Zurai wrote:I appear to be unable to draw out all of the vanilla weapons, unless the current weapon I'm holding runs out of ammo.

Strange, I thought I'd fixed that. I'll look into that when I get home from work.


Someone64 wrote:Yay more randomizers! It would be cool if you could separate the weapon and monster parts of the mod into separate packages so we can mix and match these with other mods, too.

This is something I hope to do in the future. The current build is still based on the old file structure but I'm in the process of rebuilding the entire mod from scratch to accommodate the player select. There's a lot to get through, so it may take a while.
Top Thank you. Complex Doom has been my go-to mod for a while now, but while it's flashy, it's stupidly difficult. I remember the original Shuffle mod being variably difficult, meaning that the experience was very much shaped by what enemies you met and what weapons you got. I'm gonna try this.
Top

Spoiler:
I loaded the base file and Crash, for some reason the zombieman rifle is literally a zombie sprite, seen at the top left here: It even moves when I shoot. I'm using GZDoom 2.4.0 like the OP says I should be.

Also, is Crash's pistol meant to use the vanilla pistol flash state? EDIT: Seems I loaded the files in the wrong order. oops!
Top

Regarding the vanilla weapons issue, it turns out that during my archive restructuring endeavours, I accidentally uploaded the wrong base file which is missing the all-important KEYCONF for the vanilla weapons. Download is temporarily offline whilst I upload the new version (my new modem still hasn't arrived yet and I'm trying to upload via a 3G mobile hotspot :/).

I'll post back when the fixed version is uploaded.
Top

EDIT: Just discovered the sprite clash mentioned above. Why do I only find these things after I go live?
Last edited by scalliano on Tue May 02, 2017 10:04 am, edited 1 time in total.
Top

scalliano wrote:Just discovered the sprite clash mentioned above. Why do I only find these things after I go live?

Oh, that error was in the base file itself? In that case I went through the other weapons a bit, and it seems the FragGrenade weapon uses the sprite of the HandGrenade weapon's grenade projectile. Yeah, I'm beginning to think I released this way too early.

Currently working on a fix and scanning through the rest of the latest additions to see if there are any more. Thanks for that

Let me know if you find anything else.