MAIN LINKS TEMPORARILY DOWN DUE TO RANSOMWARE
YEY

ADDONS
Version - 1.0
LEGENDOOM RIFLES
DONWALOD
Cosmetically replaces the Chainguns with Rifles, for those that like sleek pew pew gnus over giant multi-barrel gnus.

Version - 1.0
LEGENDOOM BABEL MONSTER PATCH
DONLWOAD
A compatibility patch made by Xangi for using LegenDoom with his Babel Monsters mod.

Interested in donating to give me a drink or two?
My Kofi page, a website that lets you easily donate to people. 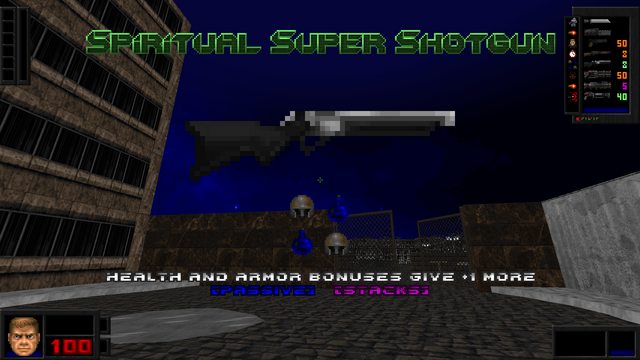 The premise of this mod is quite simple; bringing the Legendary mechanics from Fallout 4 to Doom. If you are unfamiliar with those, here's basically what happens.
Random enemies on the map are chosen to be Legendary enemies, with increased health. Bringing them down to half will cause them to fully heal and transform (kinda) into a more powerful form, attacking you relentlessly and with even more damage than normal. Killing a Legendary enemy at any point will cause them to drop a completely random Legendary weapon, which will have an extra effect altering its behaviour! There are currently 180 different effects, ranging from things like increasing the effectiveness of healing items, firing bouncing projectiles, doubled explosion size, or even a triple shot attack! These effects are seperated into four tiers of general awesomeness, with each tier having a different color representing it, as well as cool weapon sprites. The tiers are fairly rough, so don't expect a Common weapon to be much worse than an Epic one, it's more of a guideline than a set of rules.

On the ground, Legendary weapons will glow brightly the color of their rarity. 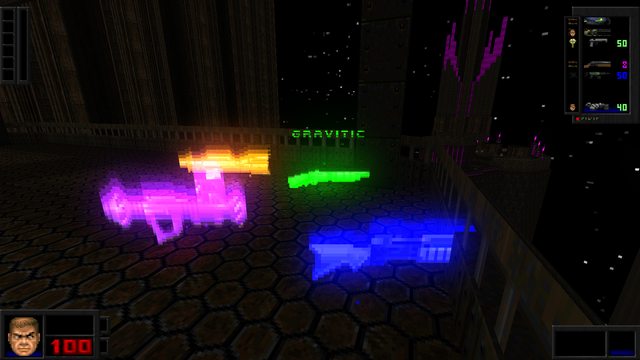 While generally Epic would be better than Common, most effects are different enough that it is difficult to consider one superior to another. Rarity isn't everything here!

When you pickup a Legendary for the first time, it'll display a large set of graphics onscreen, showing the name, effect and rarity of the weapon, as well as a cool close up look at it. It'll fade out slowly over time, but you can cancel it instantly by pressing Fire, Use or AltFire. Keep that in mind while running over one when firing at enemies!

You can't carry multiple versions of the same weapon, your arsenal is restricted to the standard Doom weaponry.
Obviously if you find a Legendary gun you already have a Legendary of, you can't pick it up straight away, you'll have to drop your previous gun first.
To drop a gun, so you can pick up a different Legendary weapon or whatever, hold down AltFire.

The Hud section in the top right shows what weapons you have, what tier of Legendary they are, and has a little icon representing what they do. For new players, it can be hard to remember the effects for each icon, so press L, or bind a key to Weapons Effect Info, at the bottom of Customize Controls. By pressing this button, you'll bring up a screen detailing the effects and names of all your currently held weaponry. 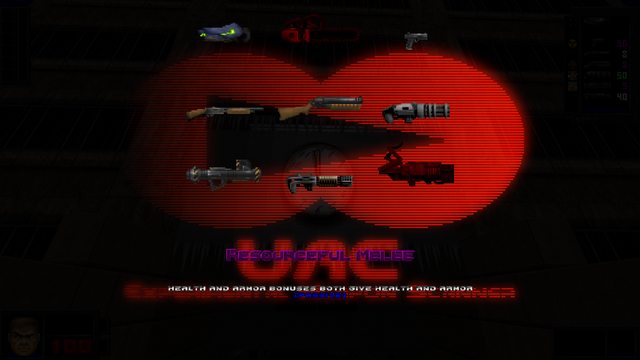 And of course, this mod comes with a ton of menu options! There you can set a whole variety of options, from toggling particles, recoil scaling, starting weapons, even the health and damage of Legendary enemies! I hope these options will allow you to customize your game just the way you want it!
One option enabled by default reminds you how to drop weapons when you walk over Legendaries you cannot pick up; remember to disable it once you've got the hang of swapping weapons.

One of the biggest, most important features of this mod, is that it is almost 100% compatible with any monsters, even custom ones added by other mods! I say almost because there are some Legendary weapon effects that need monsters to be modified in order to work with them, but there is infact an option to toggle those weapon effects off, leaving the mod completely compatible with custom monsters! One mod that is already 100% compatible with LegenDoom is CactusHege's Colorful Hell, which has a huge variety of color-themed murder minions ready to kick your face in. Any mod that doesn't have compat resistances done, it'll still work 100% fine if you disable the monster-specific weapon effects in the options menu! Try em out, especially with LegenDoomLite! 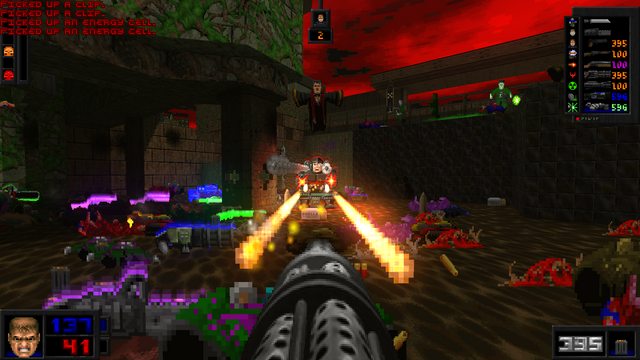 And be warned; Legendary enemies are very, very dangerous, bosses even more so! A Mastermind will become a force to be reckoned with if it ends up Legendary! 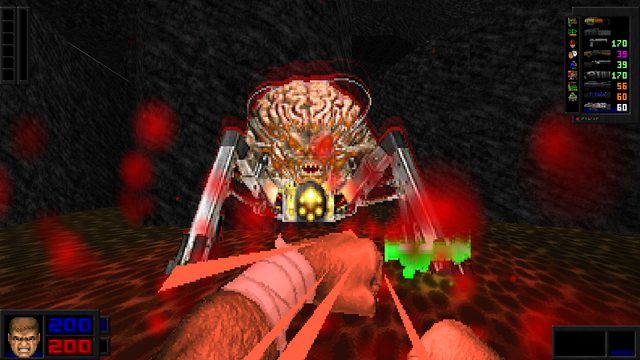 LegenDoom is not only compatible with Mikk's Champions mod, but it actually has stuff specifically to work with it, just as it has stuff to work with LegenDoom! 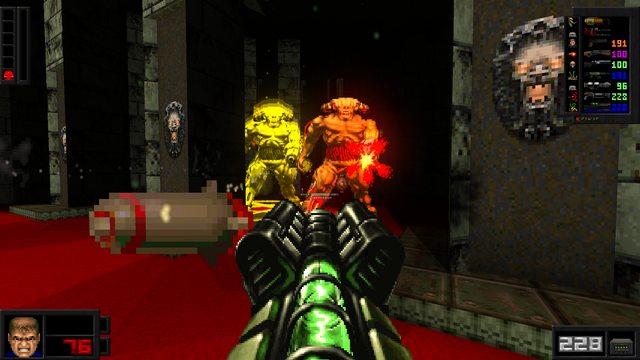 I thoroughly recommend it! The combination of both mods can take a simple Cyberdemon fight to a terrifying final boss encounter!

Current known Issues:
Scrambling prevents you from turning invisible, but you still receive the benefits of monster inaccuracy. It is a cosmetic bug only, gameplay is unaffected.
Last edited by Yholl on Wed Apr 20, 2022 12:51 pm, edited 35 times in total.
Top

This is looking pretty good. Hoping for a soon-ish release.

Good choice on making the D64 weapons the epic ones. Will you be using the smoother animated ones with hands?
Top

I love these kinds of mods. Can't wait to put my hands on it.
Top

-Ghost- wrote:Good choice on making the D64 weapons the epic ones. Will you be using the smoother animated ones with hands?

Everything is quite smoothly animated thanks to the dread robot known as Sgt_Shivers, as well as Perkristian's and a few other's spritework, and yes, the D64 stuff uses Cage's extra frames to look extra delicious and awesome.

Basically, weapons have: Obviously the faster weapon switch changes things a lot, but apart from that the standard weapons are basically vanilla gameplay-wise.
And of course, the stuff like the smoke, sparks etc. is all toggleable.
Top

this'll be a great way to keep yourself occupied until DRLA gets updated, i'll bet.
Top

I'll repost this for the archives;

Well, if DRLA is any indicator...

I'd honestly love to play a game made by the DRLA+DRPG teams. I play the damned mod all the time.
Top

explosive chainsaw
'i found the weapon of the gods!' -yholl

Loving the look of this mod. Can't wait to try it out.

Also, what maps are in that video and the screenshots in the OP? Is it part of the mod?
Top

If Back to Saturn X's maps and music are not identifiable to you on sight, you're playing the wrong maps.
Top

The last full megawad or mapset I played through to entirety was Valiant. I have BTSX downloaded but haven't played it yet. Looks like I will be soon! I have tons of WADs downloaded that I still haven't completed. In fact, just recently I finally completed TNT: Evilution after almost 15 years of never getting past a few levels. I know, horrible excuse for a Doomer.

That is Epic2 in all its weird egyptian/alien/future/urban/egyptian glory.
Top
650 posts