Here's a map I've been working on for the past 6 months. I wanted to get better at non-linear layouts so this is as about non-linear as I could stand making it. As a result there are a few ways to approach the map, some a little easier some a little harder. Playtime is estimated between 25 and 35 minutes at UV.

Any feedback about difficulty, ammo\health balance, boredom, bugs, misaligned textures, poor taste in music or or otherwise is greatly appreciated! I am also looking to find the author of the sky I modified for this, sadly I've lost track of who this was.

Must be played with the recently released GZDoom 4.0.0. Earlier versions of GZDoom will fail to run this. 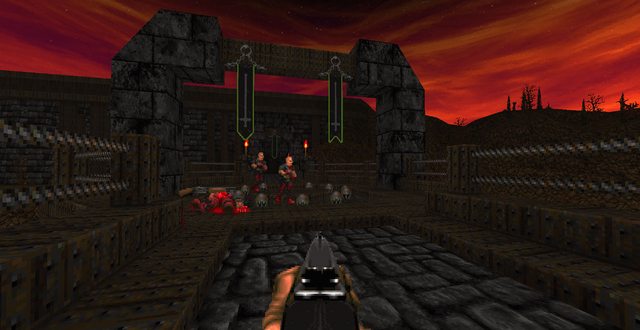 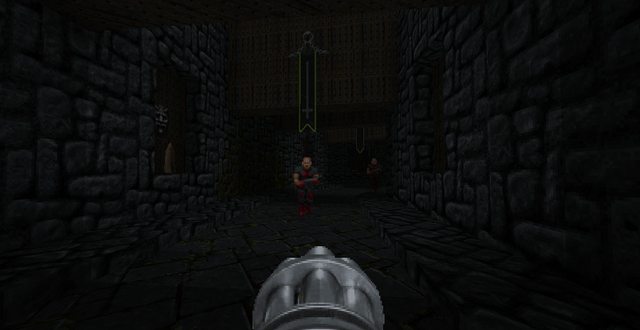 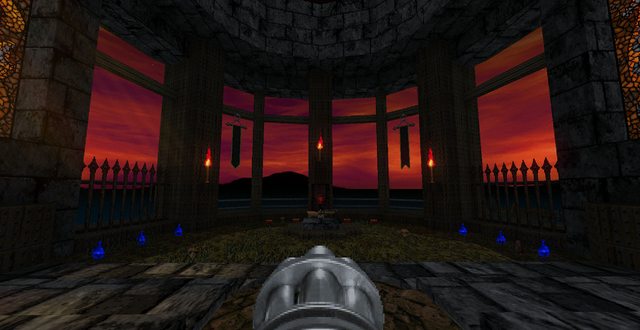 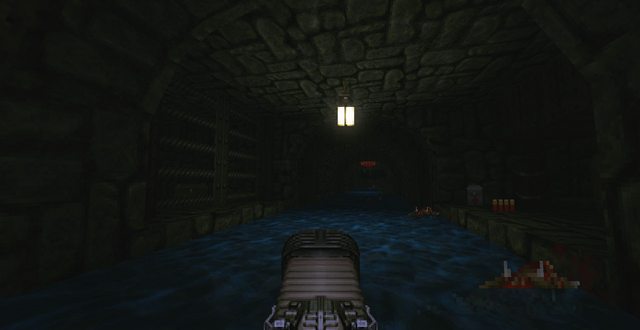 Special credits to
Music tracks "City of Ruins" and "Titan" by KhydroDjent
https://soundcloud.com/khydrodjent-1

Changes since test 4
- Added some more secrets to discover.
- Fixed red skullkey room secret triggering (really this time).
- Added compatibility for Smooth Doom's replaced skullkey actors.
- Tweaked sound and music volumes some more.
- An attempt to fix color grading shader issues some people have.
- Added a way back up after the final elevator down.
- Tweaked health & ammo ever so slightly more.
- Adjusted the cave level exit to be less abrupt.

Changes since test 3
- Re-enabled death color palette and fixed color grading not restoring properly when loading a save game.
- Fixed a spot where players could get stuck.
- Removed thing secrets and flagged their containing\nearby sectors as secret instead.
- Fixed the final lift getting stuck after the first battle.
- Some ammo adjustments.

Changes since test 2
- Fixed decorative things marked as secret that shouldn't be. There are 12 secrets in total now.
- Fixed some decals that did not show up.
- Smoothed the coastline a bit to cause less unexpected movement snagging.
- Adjusted ambient sound volume down a bit further.
- Disabled the death color effect since it cannot revert properly when loading a save game.

Changes since test 1
- Music and water ambient sound effects have had their volume reduced.
- The yellow key area is not as easy to miss anymore.
- Tweaks to ammo and health balance.
- The purple skull key is now visible in the adjusted classic status bar.
- Monster line of sight issues addressed.
- Color grading fixes.
- The color grading LUT set upon death is now reset on map start. It has also been changed to a different, less eye-searing effect.
- Infinite actor height is now forcefully disabled from MAPINFO.
- Will now run on macOS thanks to fixes to the color grading fragment shader.
- Barrels no longer explode silently.
- A dirt floor near water no longer scrolls.
- The color grading option is now actually present in the options menu.
- Some secrets have been made easier to detect.
- The large platform battles have been made a little bit more difficult.
Last edited by Exl on Thu May 30, 2019 1:00 pm, edited 6 times in total.
Top

The map is awesome. Just finished it on HNTR difficulty and was really enjoyed playing it.

There are a few minor things I noticed.

The colorgrade.fp shader is not Core Profile compatible. Usually, it's not a big deal except the map won't start at all on macOS.

To fix it, replace texture2D with texture and remote all const from local variables.
I've attached the fixed shader just in case.

The water ambient sound is way too loud for me. Maybe it's my headphones, but with the default audio options it's significantly louder than the others.
This applies to the title map and several areas like starting location.

Is it intentional that barrels explode silently?

Regarding gameplay I was really excited by looking at number of secrets.
However, they appeared to be hidden very well

Even with full automap they remain secretive enough.
It will be nice to have an ability to return the main part of the level after the platform is fully lowered.
Also, I expected some sort of boss battle in the end. The level is pretty cool without it though.

The floor of sector #4176 (the secret with rocket ammo box) is scrolling like nearby water.
Line #4558 set to block monsters for no apparent reason.

The color grading option is commented out in MENUDEF while it's mentioned in the accompanying text file.

Anyway, the level is just great. I really want to replay it on UV.
You do not have the required permissions to view the files attached to this post.
Top

Thank you for the super detailed and thorough test! Glad you caught the shader bug too, fragment shaders are not my specialty. The silent barrels were something I missing entirely, I'm not sure how I never noticed that...

The last platform part is intended to be some sort of a boss battle. Was it perhaps too easy?

Exl wrote:The last platform part is intended to be some sort of a boss battle. Was it perhaps too easy?

On easy skill it's easy enough with exception of the floor with archvile. I didn't try on other difficulties yet.
Top

The climbable waterfall is probably a bug, isn't it?
Top

Excellent map so far. I created an account to show you a moving ground texture:

Also, I'm having performance issues using GZDoom v4.0.0 which are not present in v3.7.2. Not sure if it's the map or source port though.

SpockRC wrote: Also, I'm having performance issues using GZDoom v4.0.0 which are not present in v3.7.2. Not sure if it's the map or source port though.

It's the source port, and it's a bug that's already been fixed. You can disable bloom as a workaround until the next release is available, or use a QZDoom dev build which has Vulkan merged in plus the fix.
Top

neoworm wrote:The climbable waterfall is probably a bug, isn't it?

Yes, though I can't seem to find a way to prevent it. It isn't terribly important anyway, getting back up it doesn't lead anywhere special after all.


SpockRC wrote:Excellent map so far. I created an account to show you a moving ground texture:

I updated the original post with a link to a version with a bunch of fixes. The exact changes are lsited at the bottom of the post.
Top

Well, that was a really good, top quality map. It's huge and has many twists and turns but yet manages to remain logical enough that I never felt hopelessly lost. It's actually believable as a real place too - a medieval fantasy-ish place, but somehow believable. I think the weathered, mossy textures helped.

I just loved the lighting effects in places like these: 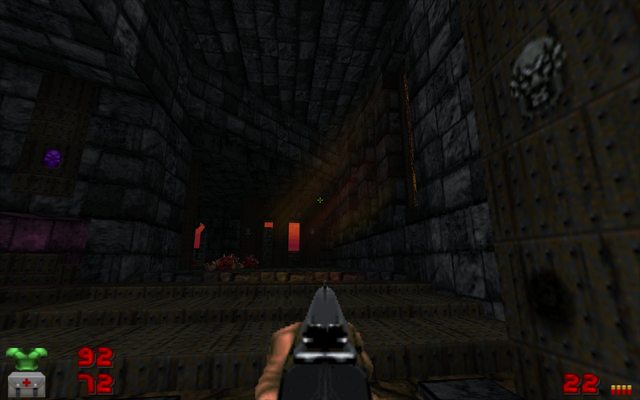 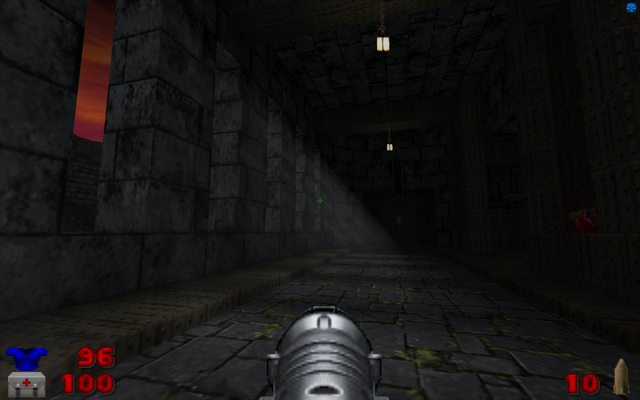 and the use of 3D space and 3D architecture is some of the best that I have seen.

The fights were well paced (definintely the kind of fights that I enjoy) as were the supplies. I always felt as if I was about to run out (and sometimes was forced to use a weapon that wasn't my preferred choice at the time), but I never actually ran out.

At the end, 6 monsters remained unaccounted for, only 3 items had not been collected but an embarrassing 27 secrets remained undiscovered! (Given that I found almost all of the items, I do wonder what is in those secrets.)

I get the impression that the keys can be grabbed in any order. I got them in blue, purple, red yellow order IIRC.

) and I only used the built-in autosaves.

Only minor points to mention:

One time that I died, I restored my game really quickly and was stuck in the washed-out death colour effect. Reloading didn't work so I had to quit, restart and then load to get normal colours back.

The console prints this (in developer mode at least) 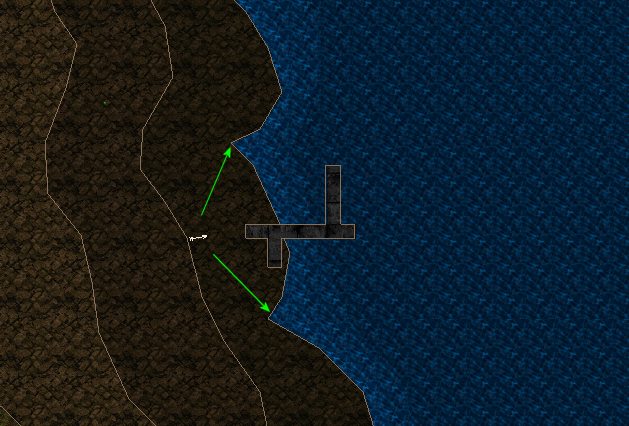 those blocking bits of coastline are very easy to get caught on; especially when backing away from a surprise cyberdemon attack. Just sayin'

There were a couple of other things too, but I see that they have been addressed with the version that was posted while I was playing.
Top

Thanks for the test and extensive feedback Enjay!

Other people have also reported not being able to find all secrets so I did a search in GZDoom Builder, turns out a fair number of them were things marked as secret that were just decoration! And even the player 1 start was marked as secret... After fixing all those the map has exactly 9 secret sectors and 3 secret thing pickups (some of which are next to each other).
Top

Replayed test version 3 on UV. Like I expected, it's still awesome. Found 9 secrets of 12, will check later where is the rest.

However, there is a walkthrough blocker in the ending section of the map.
Chaingunner #3138 has wrong TID, 212 instead of 250. Platform lowering switch is not revealed because of that.
Top

_mental_ wrote:Chaingunner #3138 has wrong TID, 212 instead of 250. Platform lowering switch is not revealed because of that.

Test version 4 that was recently released on Doomworld fixes that. I guess the author just haven't had time to post it here yet. Hopefully, he wouldn't mind me posting it:
http://www.dvdflick.net/storage/vc/vercit_test4.zip

I figured this thread had run it's course so didn't update it with test 4. There will be a test 5 at some nearby point.
Top

Man was this map awesome

i very rarely finish bigger maps like this but i was hooked. The very last floor of the elevator near the end was the toughest part
Top

Does anyone else's game crash when the two shotgunners come from the cubbies after picking up the scroll in the room with the stained glass windows?
Top
18 posts