Sup all, I’ve got a demo of my new game out today: Cyborg Lumberjack.

You’re a lumberjack with some cybernetic enhancements, such as an arm that can transform into various weaponry, and it seems a bunch of rednecks and their crazy contraptions have decided to piss you off, time to blow 'em up! 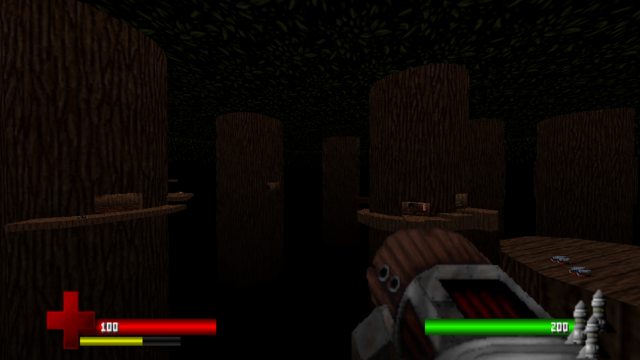 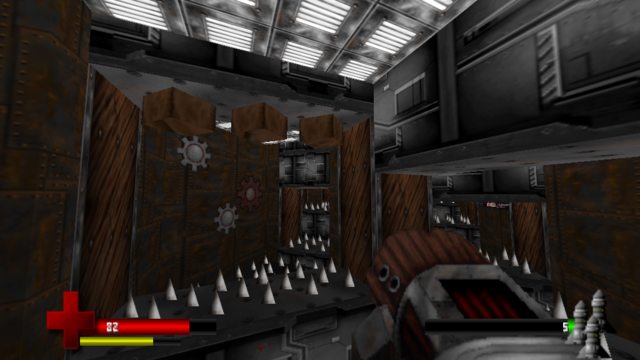 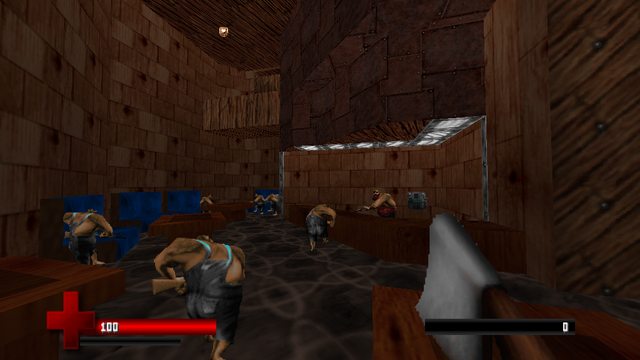 
Spoiler: Stuff that needs help
- The jetpack system isn't great, using jump to fly upwards is too slow and I can't seem to change that. There are separate hotkeys to fly up and down, but I don't want to have separate hotkeys for that, but rather have jump to fly up and crouch to go down. I tried making the jump hotkey also do fly up, but that did not work at all. On top of that, there's a separate hotkey to activate jetpack which doesn't seem to work while holding fly up, but it'll work fine while holding jump.

I love the atmosphere, the whole thing feels like a grungy 90s claymation music vid

The jetpack worked fine for me, aiming up with the mouse is faster than holding jump.
The second map is a little difficult to navigate, there's a lot of wandering around looking for the next switch, it might help if the important doors/areas had a campfire or barbeque or something similar near them, to make them more visible from the other side of the map?
Top

Just a matter of preference but for starters I think the game just looks better without the filters. And the controls could be edited a bit, since v to jetback and e to jump is a little odd. Maybe like, shift to jetback, space to jump, e activates.

As for the game itself I think it plays alright but the first level is very labyrinthine for a first level. It does introduce jetpack stuff very well but I think it might be a bit much because it also introduces like 3 guns, and many different types of enemies at once. Usually it goes a slower pace than that. The fuel stations also don't seem necessary, there's so many around but on the off-chance you do run out you'll be likely stuck. Maybe just have the jetpack refuel over time. Guns feel great, although the rocket lacks a bit of punch, I imagine that's due to the good amount of ammo you can get for it. Aside from a few polish issues (like there being no title screen of course, or lack of intro story), I think the idea of a jetback focused game could work very well. I enjoyed what I played!
Top

Gonna be frank: I really, really like this! Even though it's an early demo, I can already feel the PO'ed influence.

Here's a quick list of criticisms I could come up with after playing the demo:

Skelegant wrote:The jetpack worked fine for me, aiming up with the mouse is faster than holding jump.

True, but having the option to fly up and down can be useful for dodging projectiles while firing at the enemies in aerial combat.


galvahad wrote:The fuel stations also don't seem necessary, there's so many around but on the off-chance you do run out you'll be likely stuck. Maybe just have the jetpack refuel over time.

I was adding this in before you did this post actually, haha. The jetpack will refuel up to 25% when not in use for a few seconds, there will still be fuel stations here and there which will refuel you MUCH faster than the regenerating fuel though.

Gonna need help with that one, I have absolutely no idea how zscript works.


Anyhow, I'll have a new version up tomorrow, probably not with new levels in a few days with tweaked levels, weapons and monsters. Weapons feel better now IMO, like the shotgun now uses the altfire as the primary, and the new altfire is a grenade-like attack which can deal some nice damage. And monsters are tweaked a bit to be more fun to fight against, and the tire enemy isn't a buggy mess anymore (though it still could use some rewriting with its attack)

Till then, here's a screenie. 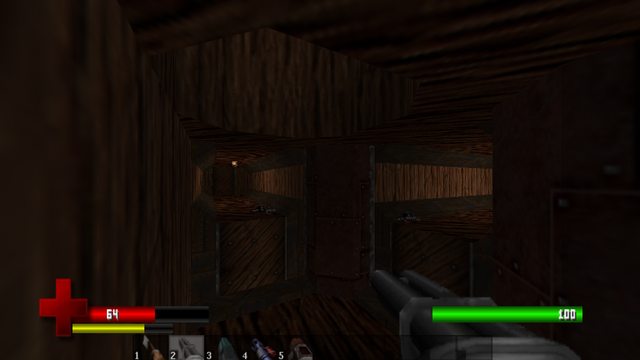 Darsycho wrote:Gonna need help with that one, I have absolutely no idea how zscript works.

I've been meaning to implement a Duke 3D style jetpack in ZScript myself, so if I discover a solution, I'll share it here.

And that shot looks great! :D Looking forward to the new release.

Edit:
I was able to get the flying movement code working! :D It even lets you crouch if you're touching the ground while the jetpack is on. If you're interested, I can post a pk3 with the code, Darsycho, or just post the code directly into the thread. I can also PM it to you if prefer that.
Top

Darsycho wrote:Gonna need help with that one, I have absolutely no idea how zscript works.

I've been meaning to implement a Duke 3D style jetpack in ZScript myself, so if I discover a solution, I'll share it here.

And that shot looks great!

Looking forward to the new release.

Edit:
I was able to get the flying movement code working!

It even lets you crouch if you're touching the ground while the jetpack is on. If you're interested, I can post a pk3 with the code, Darsycho, or just post the code directly into the thread. I can also PM it to you if prefer that.

Sure, send a PM.
Top

I certainly hope you're still working on this. Because it's very promising! The overall wackiness and unconventional but creative designs are charming and mostly likable. You're really good at making such clever TCs and i would like to see this TC finished! I love the fact that you used some assets from CiF 3. Unfortunately i don't know the name of the game with such sprites, but at least it's getting some spotlight... Again! Also i made some feedback for the future update. Hope you like it!

Spoiler: heave ho it goes
- Healing items are very rare, it seems. I hope i can locate the Healing Station or some kind of.

- Can i expect the in-game Tutorial for using the Jetpack and the Fuel Station? At the Beginning, of course. People like me would do the chore to figure out the game's very first mechanic.

- Speaking of Fuel, would be nice if the game plays the sound when my Jetpack is ran out of Fuel.

- Can i also expect the Key Icon that displays once i pick up the certain Key Items?

- This super basic enemy, Bubba with a Shotgun deals a big damage and them Projectiles are very fast. So i quite had hard time dealing with one of them at the very first map.

- So i got the Chainsaw on the way. Looks nice. But it has one serious problem - I can't switch my Weapon because it gets stuck and there's nothing else i can do about it. Because of the version of GZDoom i'm using right now? I'm using the one included in the Game Folder.

- I kinda know that not showing any message in the game is one of its aesthetics. But i would like to toggle it so i can figure out what did i just picked up.

- I can't hear the Use fail sound effect. So i had a good amount of time touching wall for accessible door and secrets.

- Does Roller enemy really hurts you? Because i don't think so. They ram you over, sure. But the Damage is very low.

- Every single Weapon sprites in First Person(Except the Axe) got cut out and looks awkward when i look down or jumping.

- So is there any way i can beat E1L3, Woods? It's too dark, doors are barely visible or recognizable. It's like a maze that you can see but blindly.

I do hope there's more Jetpack puzzles to tinker around with. Looking good so far!
Top
8 posts • Page 1 of 1