Yes, This is the third time I have attempted to remake this old project of mine.
Yes, I am also aware of my track record for failing to release stuff I'm working on.

Now that we have that bit of unpleasant details out of the way I think a basic overview
is in order.

You are the chief of security at a remote research facility near the polar caps
on the recently terraformed planet of Venus, having been assigned to a
new project to create an alternate form of teleportation technology that can
allow the user to go anywhere in space-time, including other time periods and
even other universes. Things seems to going perfectly, but perfect never lasts...

as you were taking your daily hike you briefly hear the alarms from the base
and a radio message, A demonic invasion of the base has begun!

you immediately drop what you're doing, whip out your service pistol and rush
back to base, hoping to stop the demons before they get their claws on the
technology.

This iteration of The Edge of Time is not like any of the prior iterations or
even like any other mod at all due to certain odd bits of gameplay decisions,
which I shall be listing here I don't think I say much else about this mod of mine, as I consider it to be currently in
an alpha state. Also the credits are currently stored away in .txt files inside the mod's
main .PK3 file since I have not yet gotten around to making a bunch of CREDIT pics and
the contents of the mod itself is subject to change, stuff that might appear in the mod
right now may be removed or altered depending on the evolution of the mod itself. 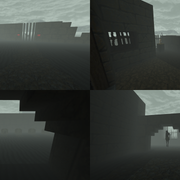 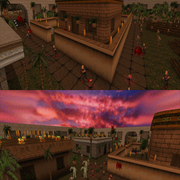 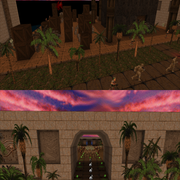 Episode 4 The End of History Screenshots 
--Other people's video's on The Edge of Time--

Screenshots looks good, will try this out
Top

footage of E2M4 of my mod, don't mind the few seconds of blackness at the beginning. It's mostly a tiny bit of a recording lag hiccup that resolves itself.
Top

Screenshots look quite nice, and the footage looks cool. I'll have to give this a shot soon.
Top

https://streamable.com/se5ok
Footage of the intro cutscene for Episode 1. Don't mind the initial few seconds of black, wish most movie editors were simple and K.I.S.S compliant.
Top

I have released a new alpha of my mod, I will be concise and list the changes real quick Please play it and gimme me some comments and critiques. I am also open to people interested in mapping and coding for this.
Top

Spoiler:
1. Some of the enemies seem way to powerful (Zombieman, Shotgunner, Chaingunner, and few, which I consider nitpicks), even if you're too far away from them.
2. I think chaingun should fire a little faster to tell the difference between it and the Carbine, even though chaingun is stronger, while Carbine is more accurate (possibly nitpicking again)
3. Some of the monster encounters are a bit bs, since they attack quicker than player reacts, but with the help of inventory items and score bonuses, it balances out a bit.
4. Even though in alpha, the fire imps (gargoyles) from Heretic don't seem to be dropping any treasure to collect, enemies can shoot you through windows if you're close and this: https://my.mixtape.moe/reqeya.mp4

Other that that, I really enjoyed my time so far. The weapons are fun to use, each have their strengths and weaknesses, enemies are powerful, but beatable, maps are well detailed and expensive, and the score is a nice touch with its bonuses. Hoping for the full release. Good luck, man.
Top

@QuakedoomNukem Cz: Your current copy of the Alpha is kinda slightly out of date, I kinda updated the alpha in dropbox (just click the link in the opening post to download the latest revision).
Top

I beat both episodes. I thought this was cool and fun, and it's not often I get to play a project where I can jump over ammo that will overfill me.

And now for some feedback (tested on Ultra-Violence):

- Like QDN Cz above mentions, the chaingun feels like the exact same thing as the submachine gun but with a windup and less accuracy. I didn't check to see if it did slightly more damage or anything since using one over the other wasn't really a problem most of the time.
- There is way, way too much shotgun ammo. It takes thirteen shotgunners to bring you back to full shotgun shells, and that's with a backpack. The shotguns are weapons you can't really fire fast enough to warrant that much replenishment that fast, and even halving the amount shotgunners drop wouldn't detriment the supply. Compare to bullet weapons where bullets are fairly scarce until there are enough chaingunners to drop chainguns (10 of those fill you up, even less if those enemies also drop bullet boxes).
- The regen powerup seems criminally useless. Either you're above 100 health thanks to all of the other pickups in the world or you're dead, practically. I didn't even know what the score bonus powerup that turned your screen purple did until the later levels, and 3 health per regen period seems kinda low. Can I suggest changing this powerup up so that it is still useful when you're above 100 health, a la High Noon Drifter's Spirit Bottle? Using that item as an example: restores health faster when below 100 (e.g. 5 every regen period), but gives minimal bonuses above 100 (e.g. 1).
- This sector in E1M2 (the one with the torch in it) seems to be muted of all sound for whatever reason.
- The crate lift in E1M3 can be activated by monsters, which leads to some amusing results.
- Heretic Imp corpses apparently make stairs hard to traverse, as observed in E1M5.
- I practically stumbled into E1's secret exit without ever finding the real exit. Conversely, E2's secret exit is pretty well hidden. I guess this speaks for the difficulty of either secret level, though.
Top

Spoiler:
The crushers in E2M1 are able to fall of their track and go straight through walls and kill the enemies.
You're able to get stuck behind the two pillars in E2M2 (i see what you did with the level name

)
The final fight in E2M5 and E1M6 feel rather underwhelming, when you give the player too many power-ups, along with the BFG replacement, maybe give them some more health (?) [possibly nitpick, you may ignore it]
The Super Arachnotrons are WAY TOO OP, they can pretty much insta-kill in some instances, nerf their damage output
Also, the stairs in E2M5 need to stay down a bit longer, so players can make it in time

Spoiler:
Episode 1's secret level exit takes to Map03 of Doom 2 instead to E1M3
These two Moai heads don't attack you at all: https://my.mixtape.moe/tauufd.mp4

I have gone ahead and fixed several problems and implemented several things suggested by the testers so far. This isn't a huge update but it will have to do until Episode 3 is released.

As an empirical test, I changed Former Sergeants up a bit to drop shotguns containing half their normal ammo. (Map-placed shotguns still give a full eight shells, to mimic the vanilla behavior.)

After playing through the first episode again on Ultra-Violence I couldn't find a single map where I was seriously deprived of shells because of this. There are enough drops in all those maps and enough ambient shotgun shell pickups to keep your shotguns fed, and this is not including the fact that you have at least 2 other ammo types to spend from at all times if you do run out of all 100 shells. Still playing through Ep. 2 again, and off the top of my head only one map allowed me to run out: the Ep. 2 secret map.

It also seems prudent to mention that I rarely if ever find myself using the double-barrelled shotgun. The combat shotgun provides a steady, controllable DPS at better range, while the DB seems more useful only for a surprise attack (rare those are) or on tightly-knit groups of weaklings. In fact, I should mention that the ton of Frost Ovums around will take out a big foe much faster than any shotgun - in addition to being great grenades to toss into a pit below you...
Top

this is a rather small changelog, not enough for major revision change