64K+ is a mod that aims to take the vanilla experience and infuse it with a bit of the modern doom games as well as a bit of balance tweaking resulting in an enhancer that looks and plays well without straying too drastically from the aesthetics and gameplay of vanilla doom. All weapons have been adjusted to prevent any individual weapon from outclassing or outshining any other. All weapons have a niche now and there's a reason to pull out every weapon (even the pistol) at some point. Monsters have been tweaked a bit, revanant rockets will time out and stop homing, the manucbus's fireball pattern is different, the cyberdemon and spidermastermind both also have more fire power. Enemies killed with the chainsaw swipe or with berserk punches drop health and ammo. Health and ammo have also been modified to prevent the player from picking up ammo they do not have room for, resulting in no health or ammo being wasted. I'll eventually expand that to include armor, but for now it only applies to health and ammo. There are a lot of special effects and little behavior tweaks and goodies as well which are fun to look at if that's your deal.

Beyond these tweaks there are a lot of extra props, a few monsters, some powerups, voxel switches, and a few other goodies for mappers to use (in the unlikely event that anyone other than me is making maps for this.) give it a peek to see whats in there. 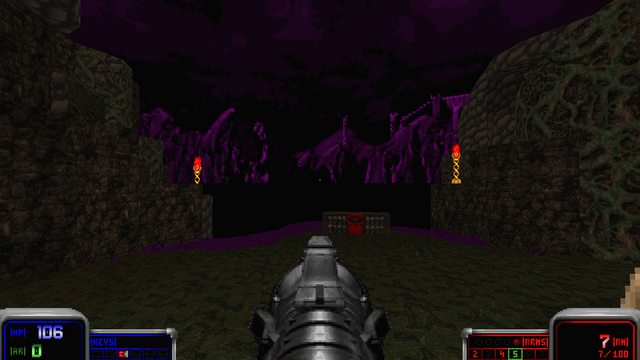 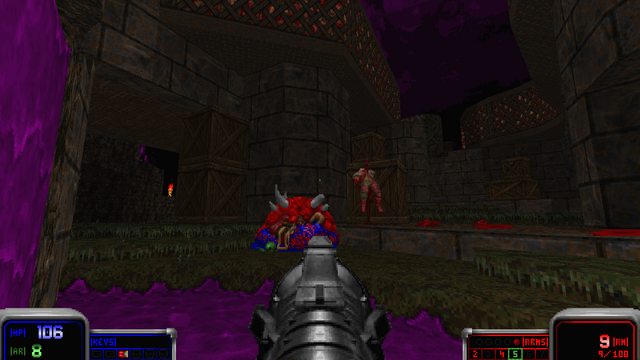 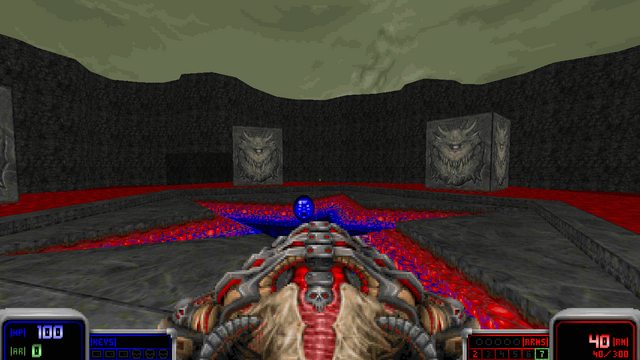 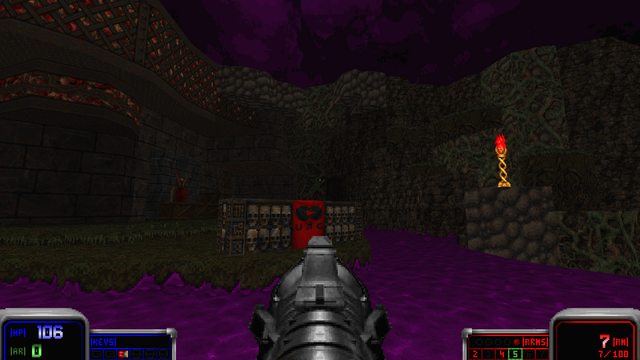 - Chainsaw
The chainsaw has been upgraded with a 2nd blade and a swipe attack. The swipe attack uses fuel and deals a lot of damage, healing the player and any enemy killed this way drops health and armor. If you run out of fuel you can get more from other chainsaws, backpacks, and by picking up health and armor bonuses.

- Combat Shotgun
The shotgun has a tighter conical spread giving it a bit more reach and distancing it from the super shotgun a bit. The reload animation can be canceled with a chainsaw swipe.

- Super Shotgun
The Super shotgun has a wider conical spread and reduced number of pellets. To compensate for this reduced lack of range and reduced damage the weapon deals extra damage at close range. The reload animation can be canceled with a chainsaw swipe which is a bit broken but is way too cool to remove.

- Chaingun
The chaingun deals more damage and is no longer able to "chaingun snipe."

- Plasmarifle
The plasmarifle still rifles plasma or whatever the gun normally does. The cooldown animation can be canceled with a chainsaw swipe.

- Unamker
The Unmaker is a lot different from the Doom 64 and Eternal versions. Instead of being a rapid fire weapon it is instead more of a railgun, high damage, high ammo usage, and accurate over long ranges. This fills a bit of a gap in the arsenal and gives a super weapon on the same level as the BFG that doesn't out-mode any existing weapons.

Yeah, this is pretty good! Haven't had the chance to use it for a specifically long amount of time but so far, no complaints for me.

Also, any chance of implementing the unmaker in the future?

EDIT: What are the map packs used in the screenshots? They look a bit interesting.
Top

I would like to add an unmaker to this, but I haven't been able to get doom64s unmaker sprites to jive stylistically with vanilla dooms art style. If I can ever get those sprites to work I have an idea as to how I could add it.

The first 2 screenshots are of Perditions Gate, the 3rd is Nullspace, 4th is Vrack2b, and the last one is one of the maps from Alien Vendetta.

The link in the first post should be updated to include smart scavenger-esk ammo pickups that won't let you pick them up if you don't have room for them. This only applies to ammo, weapons, backpacks, and health will still be picked up like normal.
Top

My only real complaint with this is the quick melee attack.

In my opinion, it takes too long to use. Like a .02 or 03 second delay. Basically you have to pre click and run up on someone to use it effectively. Also, I feel that the damage is rather low. 3 to 4 hits to bring down a zombie gunner.

I know its a situational use sort of thing... But I feel it should pack more of a punch, and if the delay is intentional. At least have some sort of push back. Like keeping Pinkies from cornering you and giving you just enough room after the punch to squeeze out to safety.

Other then the melee thing, I really like the feel of the rest of the weps. The chaingun animation and the Doom 64 shotguns are a nice touch.
Top

The quick melee is about the same as the vanilla fist in terms of speed and damage, but a little push-back would probably be something that would work. I'll have to mess around with it.
Top

I noticed that the berserk fist can practically one shot every enemy, though it's very risky in the case of cyberdemons.
Top

That doesn't sound like intended behaviour. I'll have to check that out when I get to my PC.
EDIT: It was not intended, I left a line in from a test of the glorykill stuff. Re-download and it should be fixed.
Top The smart ammo system has been implemented and now I'm working on a doom-alpha/beta inspired HUD.
Top

I loooooove that hud. Please tell me there will be a standalone version as well. ;w;
Top

The weapon indicator in the middle is done in a way that makes it a little difficult to make standalone, but when I get the next update out people are free to do whatever with it.
Top

EDIT: I see no problems, i guess. Nevermind!
Top

Oh wait and wait, it actually has some problems...

Spoiler: And the good thing is i'm already prepared for some feedback!
- I'm seeing it-has-no-decals™ cliche on every weapons except rocket launcher and plasma rifle.
- Zombieman's clip gives you 10 bullets, intentional?
- Any reason why Super shotgun plays pump-action shotgun sound effect?
- I don't know, but plasma rifle seems held up A LOT unlike other weapons.

There you go!
Top

* The no decals thing is an oversight as I play with decals off. I can fix that pretty easily.
* The clip thing is something that I'm working on, but I currently hit a roadblock where a clip cannot tell that it was dropped, so I can't do anything about that when it is picked up. I can make a temp fix in the mean time.
* I fixed that, whoops.
* I moved it down.

I've been working pretty hard at this the past few days and I have added a few things in this update, namely:

*I've added cool smoke effects that only show up if the player has the Rocket trails setting set to Sprites or Sprites & Particles.
*Quite a few effects have their sprites rotated randomly every frame to add a bit of cheap visual variety
*Extra frames for the bullet puff and explosive barrel
*A handful of miscellaneous new sprites
*More XDeath gore
*Tweaked quick melee timing. It is now much easier to use effectively
*I think I messed with the SSG, but cannot recall how
*zombiemen drop clips with appropriate amount of ammo

Known Issues with 0.2:
*XDeath gore does not match monster blood color. I am stumped as to why this is.
*Message for opening a large container of ammo is shown after the first ammo pickup you get from the container. (not a bug, just annoying to me) fixed now
*nazis do drop too much ammo (this won't change as the nazis are being left alone for dehacked reasons)