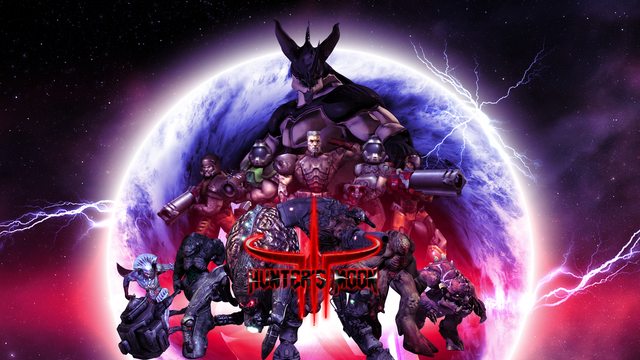 Welcome to The Temple Of The Portals, prepare to fight hordes of giant monstrosities of hell for the control of the multiverse, Hunter's Moon is a mod for Zandronum and GZDoom that consists in bring the single-player campaign that Quake III Arena never had, the story continues millenniums after the Vadrigars and the Eternal Arenas taking the warriors out of the arenas' endless battles to fight for the control of what have locked them there, The Temple Of The Portals is the place where everything connects, it is the universe between the universes, it is a source of unlimited and unimaginable power that even gods wants control it.

+Reworked Sorlag completely to update her model and sounds to her Quake Champions version, she now have a special action of biting enemies making them drop even more health if it kills, she is also the only Tank-role character to have less damage resistance due to her ability of healing
+Reworked Orbital Elemental Deconstruction Beacon completely
+Improved Hossman's ability to also apply projectile multiplication with spread based on weapon power level and functionality (Gauntlet, Lightning Gun and Railgun are unaffected)
+Replaced more dead corpses of the monsters with mod ones instead of the vanilla sprites
+Changed Battle Recruit skill level to allow respawning
+Changed Vadrigar Reincarnation skill level to spawn enemies meant for Cooperative mode, disabled cheats for it and allowed Major Health Spheres to spawn
+Health Vials and Armor Pieces now have the magnetic effect towards the player, similar to DOOM (2016) and Doom Eternal health and armor drops
+Flashlight is now a proper long spot light instead of a segment of point lights

*Added a wind sound for vertical movement for better immersion
*Added a Sprint state to Uriel's Trauma form for better mobility similar to Tyzen's
*Vehicles now have different behavior when interacting with swimmable water based on their physical traits (i.e GEV Tank will hover over it)
*Extended the message hint of abilities to warn the player when the character's ability is passive and that they can't be used while inside a vehicle
*Changed the behavior of blood and gore when interacting with swimmable water
*Changed the behavior of Grenades when interacting with swimmable water
*Changed the behavior of Rocket trails when interacting with swimmable water
*Fixed Anarki's ability damaging himself and possibly nearby allies
*Fixed Lightning Gun's beam not passing through allies
*Fixed Visor's Gravity Hammer being attempted to be targeted by friendly AI
*Fixed Uriel not being able to transform into his Trauma form whenever a script or powerup applies temporary invulnerability
*Fixed Morgan's Dakka not being applied to Chaingun and Lightning Gun
*Fixed GEV Walker blinking invisible briefly after releasing barrels
*Fixed Major's passive stop working after exiting a GEV Walker
*Fixed Grunt and Keel's abilities stop recieving charges after exiting a GEV Walker
*Fixed mech vehicles not playing their walking animations inside swimmable water
*Fixed Tyzen's not returning to regular run after firing a weapon or crouching when in sprint state
*Fixed a weird frame in Tyzen's swimming animation
*Improved Tyzen's sprint animation
*Improved Lightning Gun's Ultimate Core Beam effect to the same used by the weapon itself
*Optimized Uriel's Trauma form model

Download Map Pack V0.4
Note: Load it after the mod itself to prevent issues with GZDoom throwing errors around.

Download Editor Resource R11 Last Updated: December-25.
If you want create maps for Hunter's Moon or want adapt already existing Doom maps for personal use, load this into GZDoom Builder as a additional resource file, it contains the correct monster and weapon replacements to fix the issue with weapons differing from the ammo near them, also the tall monsters stucking on ceiling if the room's height isn't enough for them.

PBR - Add-on V1.3
-Simple add-on for GZDoom which adds back the natural shading of many models to makes them look better nearby dynamic lights.

Total Sonic Mayhem Music Pack
-This was the old Music Pack, but now some Quake 2 songs were removed and some others that combines better with Quake 3 Industrial style were added in place

Madness of an Epic Massacre Music Pack
-This add-on contains various tracks from many sources, from movies and other games, works with pretty every megawad/gameplay wad but mainly made for Hunter's Moon.

Madness of an Epic Massacre Music Pack - Volume 2
-Second edition of the add-on above.

I havent really seen any q3 mod remakes until now so far iv only seen a quake 2 and four.
Looks interesting ill deffinatly have a look at this once it is released on zdoom.

What i just REALLY admire in this mod is the Gore. Man does that gore look satisfying. I'm studying what it is about them that makes them look so good, You've got some really nice decals there. And probably like the blood fog that fills the whole room when you gib something looks good.

Good job with that, Downloading and going to try the weapons out too.
Top

hammer oz wrote:Looks interesting ill deffinatly have a look at this once it is released on zdoom.

This won't be for ZDoom since it uses models.
Top

hammer oz wrote:Looks interesting ill deffinatly have a look at this once it is released on zdoom.

This won't be for ZDoom since it uses models.

well thx for all, but this mod is really far from what i want yet

i updated the V1.2 some days ago, edited in first post

-icytux, i just tried make a good combination with sprites, models, sounds and decals in this gore

Yes its a helluva good combination. Too bad The ports don't support Floor decals yet. Looking at the gore in this mod really makes me hungers for real floor/ceiling decals. The Wall decals look just amazing. The floor decals are, as I guessed. Sort of glitchy but thats the thing you've got to live with due to the limits of the port.
Top

well while trying to run this i got

skulltag doesnt like my system for some reason
Top

-icytux, i hope this come to Doom engine someday but for the moment we need to improvise with we have XD

I played this mod for 4 hours straight, man, this rocks. The gore system makes the game so satisfying.

But there are two flaws you should take a look at:

- The large monsters, such the Hell Baron, and specially the Cyberdemon and Spider Mastermind, are ALWAYS getting stuck because their models are too big. You should decrease their sizes (or at least their colision polygons) to make them move freely.

- I'm not taking splash damage from my own explosions, that makes the game a tad too easy.

That's odd.... There's no 3D gib pieces or blood on the ground. Doesn't this version include it?
Top

yes, since you need Skulltag in OpenGL and with gl_use_models 1 to work perfectly

in the future this will work for GZDoom too
Top

I have already done that. There's still no 3D gibs/Quake III style blood included when I play for some reason. I'm running Windows Vista Home Basic 32 Bit. Any other suggestions?
Top

I updated to V1.5, now i compiled Monsters and Source in a single pk3, so if the problem persists idk what happeing with your Skulltag/Sytem (whatever is causing the problem)
Top
464 posts