Discuss anything ZDoom-related that doesn't fall into one of the other categories.
5 posts • Page 1 of 1

Several months ago I played through Crapi - the megawad with huge non-linear levels. It took over 20 hours for me to beat it. Despite its complexity, no guides or walkthoughs were available online, so I decided to make one.
The key element to megawad's difficulty lies not only in level complexity, but also in huge number of interconnections between levels (a lot of levels could be entered and exited multiple ways). So instead of doing a simple walkthrough guide I decided to make a route layout with all interconnections between levels.
I recently started playing its successor, Junko and I remembered that I forgot to post the route guide here, so I'm doing it now. 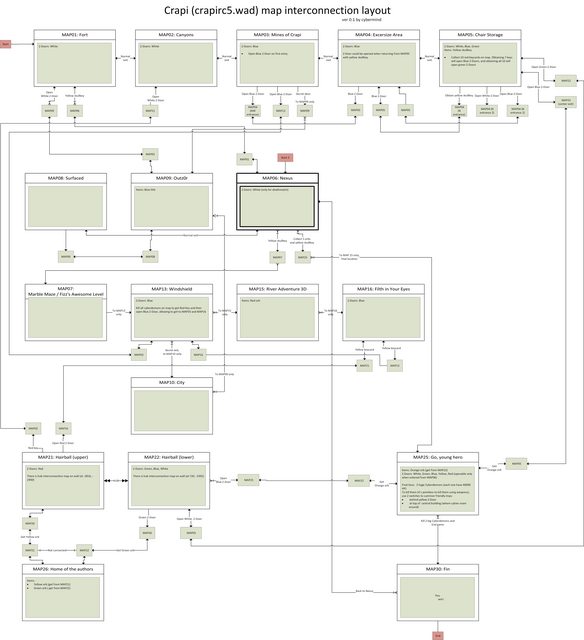 Your global objective is to collect yellow skullkey and 5 colored orbs, then return to MAP06 and go to MAP25 with final boss.

You could download the resizeable vector version in the attachment.

Overall, while Crapi could be annoying sometimes (it has complex and confusing level layout, a lot of hitscanners, maps resetting on re-entry), it still was fun to play. My favorite levels were MAP21/MAP22.
You do not have the required permissions to view the files attached to this post.
Top

I loved Junko. I wish I could love Crapi too, but the non-feature of maps resetting upon entry pushed me away.
Top

Thanks! I tried to play through this WAD very long ago, but didn't like the maps-resetting-thing either. So I tried to edit the WAD to remove it (i.e. connect the maps into a proper hub), but I think I didn't have enough experience for that back then, and something went wrong. Perhaps I should try again. It wouldn't be the way the WAD was intended to be played, but who cares?
Top

I think I remember the problem being that turning the mapset into a hub has you keep keycards when entering maps, nullifying lots of exploration. It should be possible to take away the keys, but then you can't open doors in maps you've already explored because the keys have been picked up.

Possible solutions: What's frustrating about Crapi is that the map resetting is definitely intentional, as it features special Z-marked doors that can be opened and stay open across map loads.
Top

Xeotroid wrote: ↑Sat Nov 26, 2022 8:16 am You lose keys when changing maps, but keys can be infinitely picked up. Would just need to replace the key definitions and do some stuff in them I assume.

Personally, I wouldn't want to remember the location of every key on every map just to revisit them every time I return to a map I've already been to. It might also break the gameplay entirely if some of those locations cannot be backtracked to.

Xeotroid wrote: ↑Sat Nov 26, 2022 8:16 amYou keep keys, and each map has its own set of keys. With ZScript that should be pretty easy to do on a technical level, but it would get pretty messy. Some change to the HUD that would only show map-relevant keys might help with that, but it's getting pretty complex now.

Not trivial - changing keys will require changing the corresponding lock numbers as well, and having to add a separate actor class for every key/map combination gets messy very quickly.

I think I'd rather implement a static event handler for bookkeeping (which keys the player has picked up on each map) and use that information on world load/unload events to alter inventory accordingly. This method is much less invasive, and HUD changes are not required in this case.

Xeotroid wrote: ↑Sat Nov 26, 2022 8:16 am What's frustrating about Crapi is that the map resetting is definitely intentional, as it features special Z-marked doors that can be opened and stay open across map loads.

And even so, I still don't like it... but I remember the first couple or so maps looked quite impressive (for their time), so I'd rather play it my own way than not play it at all.
Top
5 posts • Page 1 of 1