"Hands of Necromancy" Demo will be available at June 13 for the Steam NextFest!
The full game should be released shortly after June 20. 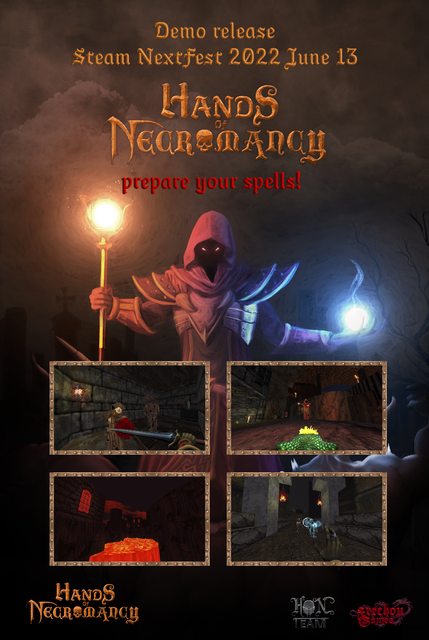 Superb news, thanks for sharing!
Top

Hands of Necromancy Demo date has changed.
It will be released on STEAM on June 2!

Someone striked-out the zero in the first release date, I see (from 20 to 2, I know I'm bad at these jokes pleasedontbullyme)

You are funny :3 no worry!
I stressed for a moment if i missed something haha (yeah 5am here, im tired xD, gonna sleep soon ^^)
Top

The demo is out!

I've checked the news tab in Steam and I didn't see anything. Perhaps that would be nice to have for those who are not regulars in the forum but do follow/wishlist the games in that platform. Just a suggestion, though.
Top

Based on my experiences, I gotta say, I'm psyched for this game. So, I gave the demo a whirl. And it definitely has some charm. I'm all psyched, you have done a FANTASTIC job, Boss.
Top

I've checked the news tab in Steam and I didn't see anything. Perhaps that would be nice to have for those who are not regulars in the forum but do follow/wishlist the games in that platform. Just a suggestion, though.

Thank you, I am still not used to all the tools Steam has available. This is the first time I've ever published a game on there.


AlphaSoraKun wrote:Based on my experiences, I gotta say, I'm psyched for this game. So, I gave the demo a whirl. And it definitely has some charm. I'm all psyched, you have done a FANTASTIC job, Boss.

Just downloaded the demo and went through first 2 maps... What can I say? Reminds to me of Hexen, something about Witchaven, something about ShadowCaster and even The Wheel of Time, all with a very personal touch everywhere, feels really like a piece of art!
I got it immediately and I have shared several screnshots through my Steam profile, there are some feedbacks regarding my gameplay that you might be interested with, also I do noticed that crushes and pillars doesn't produce any sounds, maybe related just to the demo itself.

Spoiler:
Included only shots which shows you some issues I have noticed

Also one last consideration: the "T" font lowercase character seems too much similar to "R" lowercase in general, that sometimes makes difficult to read on screen intermissions without thinking "wait there is a typo... ah no it is not"
Last edited by Ozymandias81 on Thu Jun 02, 2022 4:03 pm, edited 1 time in total.
Top

I did a "quick" run for the first map and it looks really nice. I like there is variety in monsters since the beginning. Without getting too deep in reviewing (since I still want a broader picture of it), a few little things to mention:

Not sure if the automap is supposed to be fully enabled from the start, but even then, there are some rooms that I think they weren't intended to be shown: 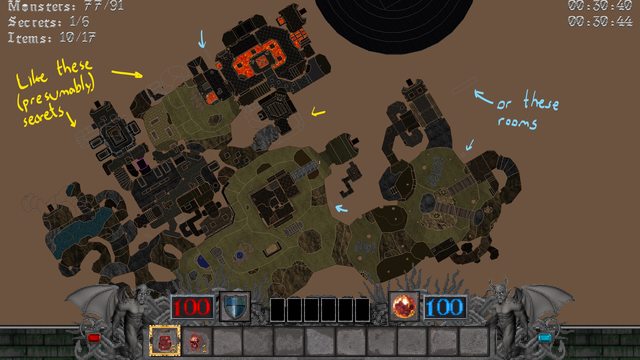 It took me a while to realize the red number was health and the blue one was the ammo (I had my status bar set in the next size to the one in the screenshot, with just the numbers). Felt specially unintuitive with the health being replenished by blue potions and picking red orbs for ammo, at least as a first impression.
Top

This game is great in motion! Very good vibe.
First of all its finally a brand NEW NEW game not another mod or frankesprite. The maps feel fresh because of the new textures. The enemies are new, not sure if you understand what i will mean by that, but the monster placements is new (like it dont feel that they are placeholder to do the same job as Shotgun guy or they another heretic Gargoyle). The weapons are new. You have no idea how good it feels.
Maps are great! I was afraid "oh no... hexen fanboys make another switch hunt" , but its not the case !! Maps are very nice. I like playing them.

I play till factory map (where i die), get tornado and ice. on normal difficulty. without running.

- weapons dont have alt fire
- cant destroy barrels (no interaction with decorations at all, it's a step back from hexen even (not to mention IonMaiden, Duke...))
- blue/red potions and UI colours for health and ammo are confusing
- ammo pick up are not animated
- i hate small enemies. Snakes should be bigger, human sized. I think small enemies should be only decoration.
+ all enemies are new - and by new i mean there is no copy paste feel from other games.
- where is my Knight like enemy? (Arcane Dimension mod for Quake).
- where are armor pickups ?!
- too many acolytes enemies
+ its great that even melee monster has some range attack
+ 1st weapons sword is fantastic! Melee combat is very good. I enjoy it a LOT. plus the ammo for sword. Nice idea! I appreaciate ammo drop only with connected hits.
+ sounds are great. And voice acting. (I would remove the intro wall of text. Its poor, unengaging writting)
+ maps are great, and locations are distinguished.
- fire staff projectiles and ammo pick ups looks the same. I dont know why this irk me.
- too much ammo (or maybe i focus on sword too much, but i doubt thats the reason)
- sword ammo looks boring and uninspiring (blue cube)
+ WOOW real swimming
- i would do some gameplay implication to swimming if its so common. Like some weapons not working underwater.
+ laugh sound when weapon is picked up is great!
- I hate sponge Hp enemies. But here even the mighty looking golem is easy to take down. Maybe make golem a semi-boss?
- not enough usable items. heretic is still a king here.
+ god bless you for separate ammo pickups, instead of generic mana. I hate that in hexen.

Weapons dont have ALT fire but the transformations have it, it was to keep a balance in the weapons/transformations.
I prefered focus on the amount of decorations than interactions like destroying barrel/trees, for the v1.0 of the game
Snake will stay the same, small enemies are common in fps and a transformation is based on them (to go in small places)
You have a Knight enemy but he is in the full version of the game ^^
No armor pickup but you have an item "Berserker Head" who divide the damage /2 so less damage, the golem transformation also take 30% less damage and Berserker Fist give 2x more damage for a moment
Acolyte enemies, im not sure, they are easy to kill but its easy to change if its really wanted
Too much ammo yeah because at the start, we dont have the transformations who use a stamina system, when we player start a map of the hub, its better to have enough ammo, ammo will be more scarce at map06

Some testers had some troubles to begin some maps because of it
For Sword ammo or any design stuff, we wont change it, if there is enough demands with the sales of the game, there could be a v2 (need budget) with some major changes if its really needed
Golem is short ranged and easy to kill from far but maybe we could nerf a little his hp, we need always a few tanky enemies in a game even if they are not the most fun

We will see how it goes, possible stuff we can change (minor) will be done, for major stuff, we will see after v1 when it will be released

This is very nice. To me it is very Heretic-like, but also not. It's definitely its own thing. It is easily as good as, and better than many of, the various "Doom in tights" clones that were released in the 90s, but with plenty of modern-engine-enabled polish too. Retro, but modern. For some reason I particularly like the little zombie enemies. There is something quite charming about them.

Ultimately, fantasy FPS games don't quite hit the spot for me as much as modern/futuristic ones, but that is merely a personal preference and this is a very nice game.