You have been sent to a UAC outpost on a desert world to recover a mysterious artefact. Expect heavy resistance and some new surprises. 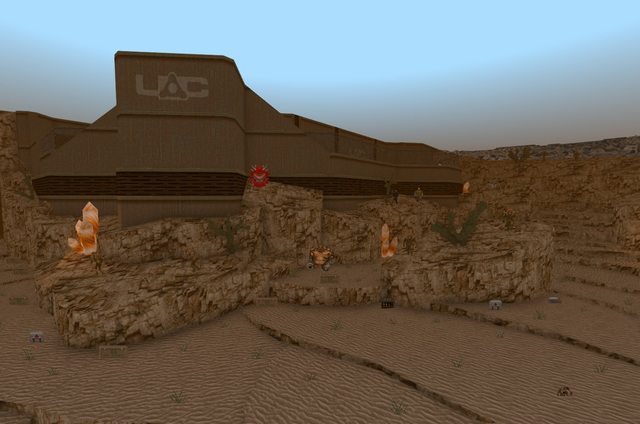 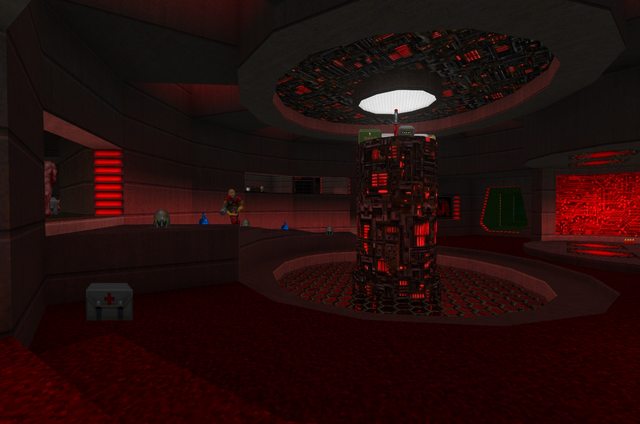 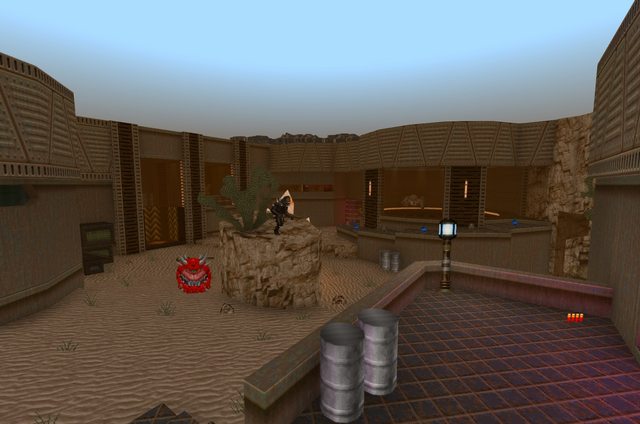 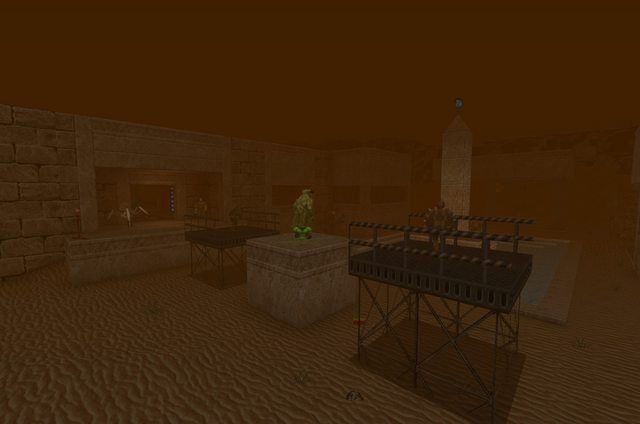 Featuring new textures by Ukiro and music by Jimmy.

Jumping and crouching are disabled.

There is an experimental optional checkpoint mode that adds several checkpoint items to the map. Simply pick them up to save the game.

<IMPORTANT!> - This map uses Hardware mode only features (3D Models, flatsprites) and cannot be played in Software mode - ensure video mode is set to Hardware before loading map or it may crash.

I recommend you use the latest version of GZDoom - v4.7.1

I played through and enjoyed it a lot.

Two things:
First in few places the hitscanners are all over the place and hidden in places where you can't even see where the damage comes from. Maybe tonning it down, replacing some with some more projectile enemies.
Second if you are going to use unpredictably uneven terrain full of slopes, let me jump. It was most problematic at the arena with Cyberdemon, in few places you would get stuck but few metres away you can climb the ledge no problem. I think jumping wouldn't hurt this level at all, only give player some more comfort on a terrain like this.
Top

First off, awesome use of GZDoom features. Of particular note are the use of dynamic lights, Doom 64 gradients, the gentle spotlight sprites for the recessed ceiling lamps, and the new teleporter effects, especially the opening portal "cutscene", and the smooth use of models for things like crates and cacti that blend seamlessly into the overall aesthetic. The map itself oozes tension and atmosphere.

The gameplay is uninterrupted classic stuff with just a few custom monsters and perilous surprises to stir the pot and keep things interesting - fool as I was, I played on UV skill and died in many embarrassing ways throughout my playthrough because this map is not afraid to throw curveballs. The use of turret enemies was fairly brutal, the teleporting dark imps gave me a run for my money (would it be prudent to give them a proper visual/sound cue like a teleport fog when they do that?) and the two super-cybruisers at the end absolutely demolished me.

Finally the layout and flow of the map is actually very smooth for a complex progression spread across two large-scale maps. It's hard to get lost, or to fail to understand where you need to be next, as progression points are rarely more than a stone's throw from where you are at any time.

...I actually really want to remix Terabyte.mid now because of this map. I truly don't think a MIDI of mine from 2008 really does it justice, lol.

I did run into a couple of nasty little bugs:
- There are a few places in which the crate models are overlapping in strange ways and sometimes even causing z-fighting. I'll see if I can screenshot the problem areas for you.
- Gibbing the flying chaingunners does not remove their FLOATBOB flag, rather hilariously.

However, I think this is gonna be well worth another runthrough, perhaps on an easier skill, because it was just that entertaining throughout.

Neoworm - great feedback, glad you enjoyed it! Regarding the hitscanners - I will thin those out a bit. I am conflicted about enabling jumping. On one hand I do like jumping in wads and it opens up possibilities for platforming and secret areas. On the other hand it can lead to skipping map triggers and crowdsurfing hordes of monsters. The map was not built with jumping in mind - I will see if it is a possibility. At the very least I will make it optional.

Jimmy - Thank you great to hear you had fun! I do like Terabyte it's a catchy tune. Yes I took full advantage of GZDoom's features with this one especially slopes and 3D models which I have been wary of and avoided in the past. I have fixed that Chaingunner issue turns out it was a silly typo.
Top

Ok RC2 is now available. See first post for file. I will give it a week or two and if there is no other issues to be fixed I will consider this the final release. Have fun!

Spoiler:
Some small level geometry tweaks to aid movement
Cyberbaron and boss cyberbaron attack behavior and stats tweaked
Grenade guys now less aggressive on medium difficulty and below
Flying chaingunners can no longer be resurrected by Archviles (this was a bit glitchy)
Moved green laser secret soulsphere so it's optional
Removed some imps from misc cliffs
Replaced some chaingunners with lesser enemies
Added optional wad that enables jumping and crouching. Load this after the main wad.
Added misc player blocking lines to harden maps against most trivial jumping/rocket jumping exploits
Relocated some worklights out of the way
Worklight hitboxes are now thinner and don't block projectiles
3D plants hitbox now shorter and doesn't block projectiles
Seaweed should now longer protrude above the water
Updated the credits textfile
Added new logo
Probably some other small changes I forgot about

Dust Devil is now complete and has been uploaded to IdGames Database and ModDb.

Thank you all for playtesting.