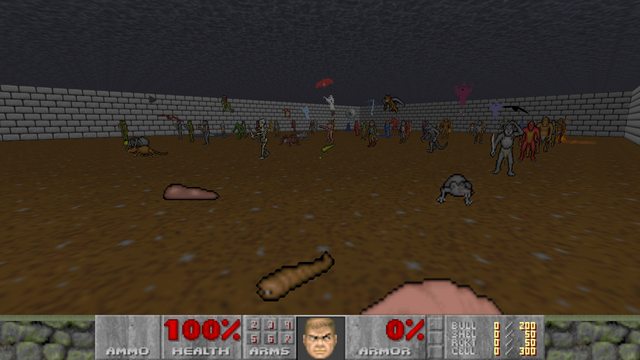 To see the monster zoo, use the wall etching on the west wall in the start room.

And I played with sloped 3d floors to build the infinity door. Those weren't as hard as I thought they would be: 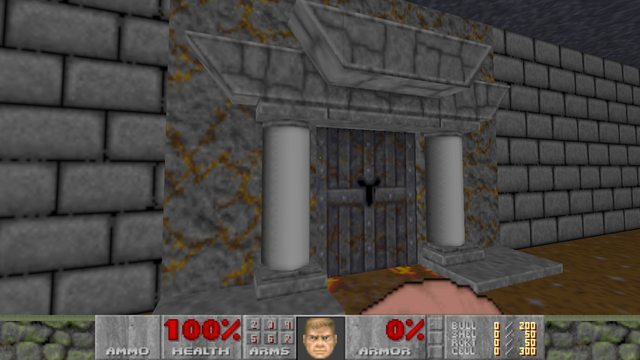 I guess at some point I'll have to move this over to the TC thread, this is becoming more than just a set of levels

And how do I put a preview image on the thread?
Top

Slopes on polyobjects is a moot point because slopes are only applied to floors or ceilings, and polyobjects do not have those. They're just a hollow set of moving walls.
Top

Gez wrote:Slopes on polyobjects is a moot point because slopes are only applied to floors or ceilings, and polyobjects do not have those. They're just a hollow set of moving walls.

Yes and no. If you define a poly object as a void in a control sector, it becomes basically a big moving void in your map, infinitely tall from floor to ceiling of any sector it crosses. However if you define it with an actual sector, it will have a finite height, and you can jump over it or stand on top of it. So I've been using this trick to define all the swinging polyobj doors in my level. Building them with an non-sloped top is no problem, see this door: 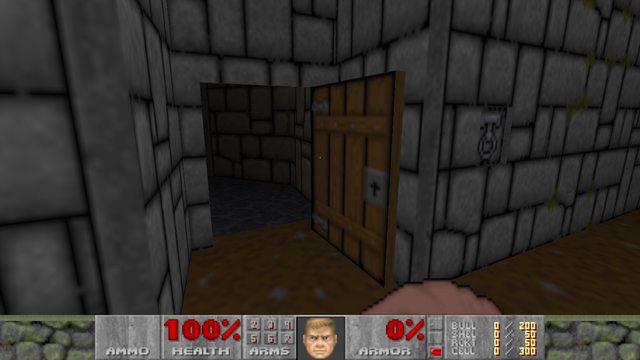 It has no flat on top, so if you do get up there it just looks like an old vanilla doom bridge, but it's still a trick that has it's uses.

What I've not been able to do yet is figure out how to create a door with sloped top, for example to fit into the sloped door frame: 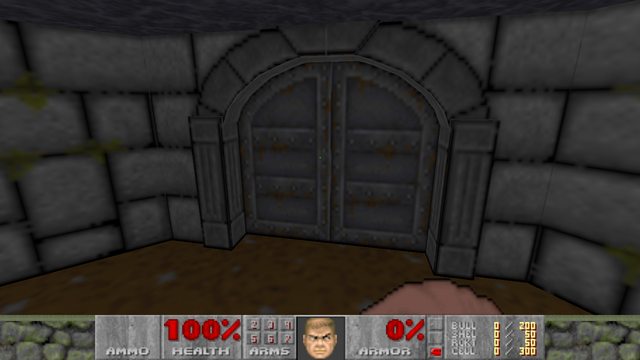 Don't worry, I know all that!

I suppose you could use textures where the sloped out part is transparent, but it'd give you an opening to see how empty the pobj really is. Which is not a problem for a rectangular door where the top is above camera level.
Top

Gez wrote:Don't worry, I know all that!

I suppose you could use textures where the sloped out part is transparent, but it'd give you an opening to see how empty the pobj really is. Which is not a problem for a rectangular door where the top is above camera level.

OK, after some experimenting I figured it out. Kind of. Poly objects do allow slopes, however the code that moves and rotates them doesn't move or rotate the slope normals with the rest of the object. So a poly object can move parallel to it's slope normal, but any other direction or rotation distorts the object along the plane(s).

Anyway, yeah, using a transparent mid-texture on a 2-sided line was my next thing to try. I like using the slopes because it's an easy way to smooth out the jagged pixels. But yeah, I'll just have to control what angles the player can see the object from, and I think I can pull this off.
Top

OK, Got that working. Problem with using mid-textures is that they don't seem to get bullet puffs or damage decals. I can set them to block projectiles and hit scans, that stops them from getting through, but still doesn't allow decals.
Top

Unfortunately, decals on 2S mid-tex is not a thing.
Top

Looking better and better. I am tempted to have a got at implementing the UI and RPG mechanics on to these levels, provided I have permission to do so - and more so for personal use.

Nash wrote:Looking better and better. I am tempted to have a got at implementing the UI and RPG mechanics on to these levels, provided I have permission to do so - and more so for personal use.

Thanks, and wait until you see my next release. I've found the object tables in the UW source and am working on converting those to UDMF so I can put them in my levels. I'm starting with decorations, and pretty soon my levels won't just be big and empty anymore.

Once I get everything ripped and converted, I think this project will release in 2 forks - one that's just levels and monsters, and maybe weapons, but retain doom playability. It's basically Doomguy running around in the Abyss. He'll slaughter the UW monsters, since most of them are short-sighted slow moving melee creatures, so I'll have to bolster them a bit to make it challenging. So this game won't authentic, more like a cross-over.

Second release will be a TC with RPG and conversations and questing and all that. I think this can become it's own iwad, no reliance on Doom resources or anything else. But that's pretty far past my level of expertise, that's when I start posting like crazy over in the scripting forum. If you want to do your own thing, that's on you. But maybe we brainstorm and see if we have similar vision and can work together, because I'd really appreciate the help.

Meanwhile if you're interested in the RPG mechanics, take a look at my critter definitions (UW calls the mobs critters). I found the stats tables in UW source and put them in the UDMF definitions, just commented out until I know what to do with them. Maybe you've got some ideas.
Top

Update - got all the items out of UW and put into my levels. Still need to do the animations and interactions, because right now they don't do much - mostly just static decorations. 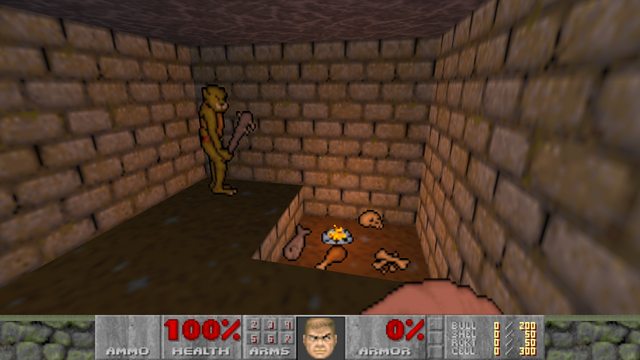 Hey Sir Robin, looks I wasn't the only one working on a UW project it seems, I am working on it under Hexen, UDMF format. While idk if you know about a tool called "UWViewer", I will put it here so that it might help you with mapping, at least this is my idea to recreate them (because replaying the game might take a lot of time on my end). I will give a go to this project probably next week, it is cool to see that finally UW projects for iDTech related games are happening

uwviewer.7z
You do not have the required permissions to view the files attached to this post.
Top

Awesome! I'll take a look at what you're doing. I haven't updated this thread in a while because I haven't done much work on the levels, I've been learning ZScript and the GZDoom interfacing and working on game play features. This week I've been working on building a tutorial level to demonstrate all that I have working so far. I hope to have that uploaded in the next few days, check back and have a look!

I'll take a look at that tool. I've seen a few different ones since I started. I first started making the map by hand, but realized how much work that would be and I might make mistakes, so I wrote a script that reads the UW files directly and builds the UDMF maps based on those. The geometry is all there, and the objects are in as decorations, but need to be scripted to actually do anything.

If you want to collaborate, that would be awesome. I'm realizing, as you probably have also, just how much work this is and how many systems and sub-systems it takes to bring the whole game to life. Even if our projects are going different directions, I'm sure there's some work we could share between them and I'd be down for that.
Top

Wow that dumping thing sounds like advanced scripting, wish I had such skills in programming. And yes I was already aware of the sheer amount of work to do if one wants to reproduce UW bells & whistles, something that has never been tried afaik since the existence of ZDoom and derivatives. Thanks for your offering, I'll see how things will set during these months before summer, in case I will also DM at you and discuss about this/that, but atm I do prefer to work alone since I have modded in 2 teams for like 7 years (Blade of Agony and Bloom) and I felt pretty overburnt after releases, so I am working on Hexed Underworld without any kind of pressure that could come from a team work (which hey, I still do appreciate a lot). Did I say next week to check your project? LOL NO, gonna check it now rapidly so to have an idea of what you are up to. Hexed Underworld instead sits in my github repository but it is a private one, so unless I'll invite you to it, you won't be able to see anything until I'll release something from it (or turn it public again, because it was a week before... for 3 years XD - yeah I had resources sitting there but didn't had time to attempt anything)
Top

The file posted here is pretty old. Take a look at the maps, but please don't judge my scripting skills! I was so young just a few months ago! You can see the kind of features I was thinking of and the direction I was going, but it's all pretty ugly.
For a sample of what I'm working on now, have a look at my Look Cursor. It's a feature I wrote for this mod but made it portable for use in other mods.
And wait for the tutorial. It's far from feature-complete but it's getting near a point where it's worth demoing.

I played BlooM a few months ago, I think all the way through. I remember being impressed with that.
Top

That look cursor is pretty neat, I think at a certain point I might consider to include in my project, but still I must have an idea in which direction I should progress with it... because I have a couple of options in my mind to work with. Sadly I am not good at all with ZScript, so usually when I create some scripts linked to zs I mainly check on those projects I have contribute for and adapt code for my needs, that's why I am also very precise when I write down credits for this/that. I think you should also see BoA, which has swinging doors as placeable 3d objects (check TEST_LDR map) , if one creates door with fitting walls (a 3d model with the tx setup necessary for a place, likewise the very start at your right of map01) you can also turn them mmmh destroyable I think, like in UW so you can open them. And I am judging your scripting skills yes, which damn are pretty impressive considering the map dump thing and everything else, I couldn't handle such stuff all alone, even by just checking on forums