How much computing power would it take to do this in 2001?

How much computing power would it take to do this in 2001?

First the music video, next the "making of" that show you how it gets all done in single cuts:

Re: How much computing power would it take to do this in 200

invictius wrote:First the music video, next the "making of" that show you how it gets all done in single cuts:

Compositing has been in use since atleast the 60s/70s. Overlaying scenes over one another is actually something you can do by hand, but it is a painstakingly slow process. Usually when you make matte paintings for backdrops, you composite those in the final scene - A lot of sci-fi movies do this.

More impressive is The Road to Point Reyes: 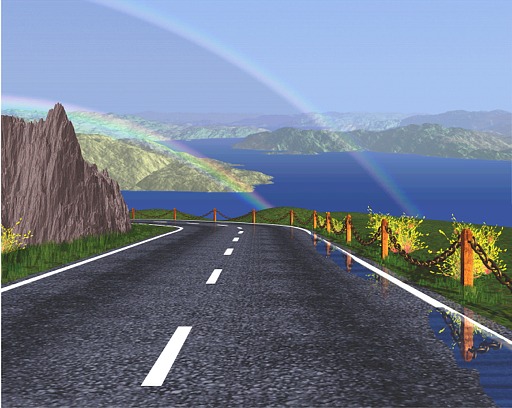 This little thing here was a hallmark in 3D rendering, made by then unknown firm, Pixar. This shot was released in March/April 1983, the work of Rob Cook, Loren Carpenter, Tom Porter, Bill Reeves, David Salesin, and Alvy Ray Smith. It marked the birth of the Reyes render engine, which would end up generating the visuals seen in the landmark 1984 animation The Adventures of Andre and Wally B. The name Reyes would eventually become a synonym for any render engine compatible with its algorithms.

According to Ray Smith,

This landscape is defined with patches, polygons, fractals, particle systems, graftals, and a variety of procedural models. The various elements were rendered separately and composited later. The piece is very much a team effort, a "one-frame movie". The credits, in alphabetical order, are:

Loren Carpenter used fractals for the mountains, rock, and lake, and a special atmosphere program for the sky and haze. He also wrote the hidden-surface program.

Rob Cook directed the picture and had the original concept. He designed the road, hills, fence, and wrote the texture-mapping and appearance factors software. He studied the theory of rainbows (in Minnaert's classic Light and Color in the Outdoors) and generated the theoretically accurate one for this piece.

Tom Porter provided the procedurally drawn texture for the hills and wrote the compositing software.

Bill Reeves used his particle systems for the grass and wrote the modeling software.

David Salesin put the ripples in the puddles.

The picture was rendered and composited using a VAX computer with an Ikonas framebuffer as picture memory. It took about a month to execute mainly because it had to be executed by parts, the final resolution of the desired image - 2048x2048 pixels, 24 bits per pixel - being far greater than that of our framebuffer (512x512 pixels). So 16 complete framebuffer-sized tiles were rendered and composited in a 4x4 tiling. The piece was scanned onto film at full resolution with a COLOR FIRE 240, courtesy of MacDonald Dettwiler and Associates, Ltd.