Please don't put requests here! They have their own forum --> here. Thank you!
75 posts

So these are Civilian sprites in Doom style. made originally from MARS3D guys but with lots of edits. originally had these on personal project but know there has been a shortage of these for long time so hope someone can get some use out of these. Purposely gave them grey/white subdued colors as they are meant to be used as filler not a actually threat. also made pain/shock state and dead/dying states from scratch as they originally had none.

civexample.PNG
got bit of feedback from posting them in spriting carnival so following up on promise.

Below is a link to Zip file with the 10 civilians (doctors,suits,regulars) included. also has Decorate code for use (note this replaces zombieman. probably change that when using, unless you want no ammo) Comes with a non damaging missile attack where they stop and look scared at target.
currently has no sounds as that is really up to personal taste.

*NOTE* make sure to use these with 0.9 scale as MARS3d stuff is bigger then DOOM2
*EDIT* Now has Gibbing deaths for those poor bastards.

*EDIT3*
DOWNLOAD -civilian sprite sheets for those interested (contains both Mars3d style and Doom style) -will update this when finished rest. This contains all 15 sprite sheets and additional sheets with green colored parts for color translations.
https://www.dropbox.com/s/3dl3i5xuxe4lx ... s.zip?dl=0

*EDIT2*
goonexample2.PNG
WIP tester version of my badguys (replaces all zombies,imp,pinky,ss,spectre,hellknight,revenant and mancubus), currently use some assorted sounds because there going to appear in a Mod of mine at later date and don't want to spoil surprise, but also wanted to give feel of how they can be used. Feel free to take and use them. This includes a both lethal/non lethal (FIST) options.
-UPDATED 01/12 -now with chicago mobsters, russian AK suit and extra gasmask merc
-UPDATED 10/12 -now has big merc as mancubus (better version with new weapons soon)
Credits included in File
https://www.dropbox.com/s/cns96lg04gvow ... S.zip?dl=0
GOON SPRITE SHEETS contained in a zip, credits in file (feel free to use these for anything)
https://www.dropbox.com/s/z9e4tku7z0low ... s.zip?dl=0

NEW# sprite sheets for people to use. Whole lot of Images 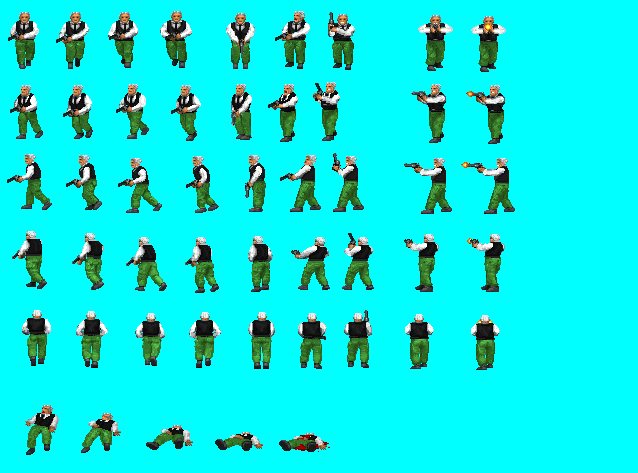 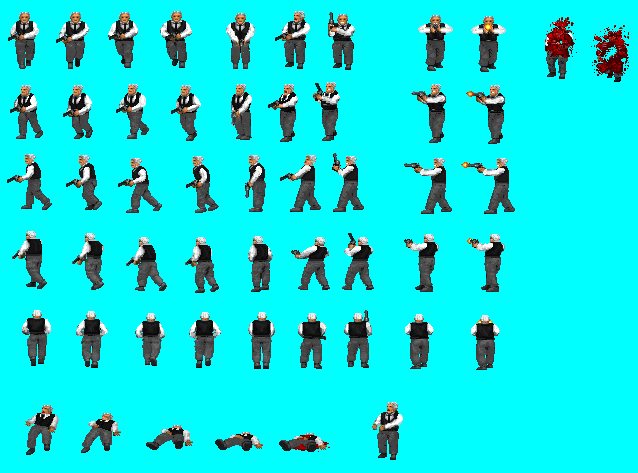 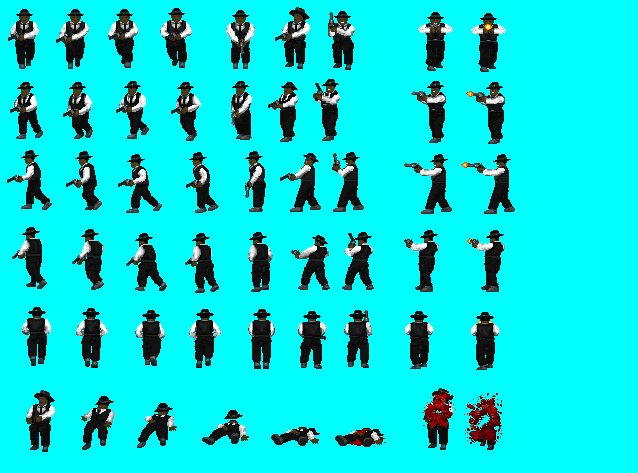 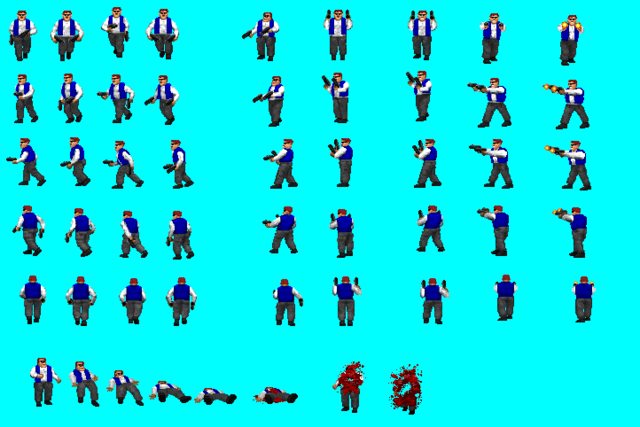 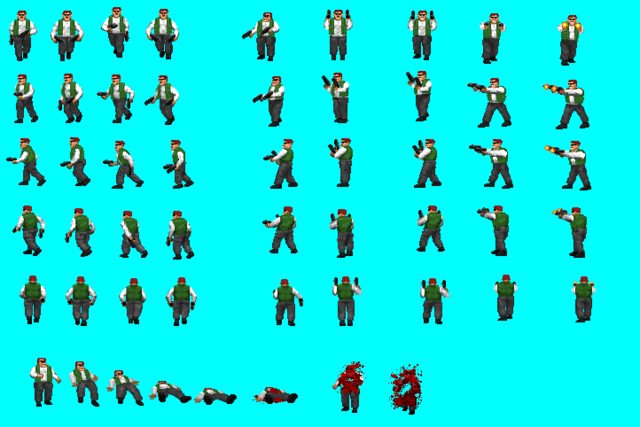 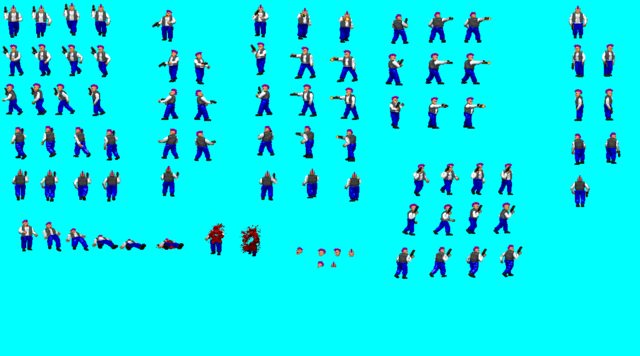 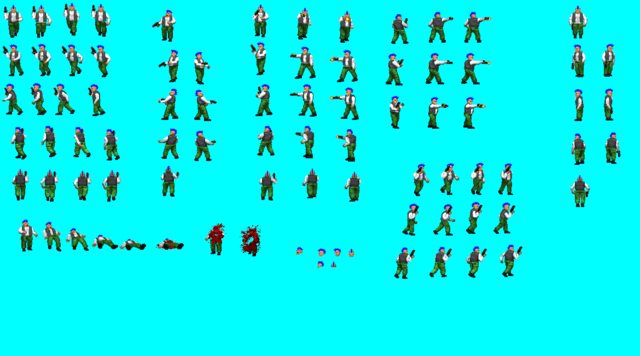 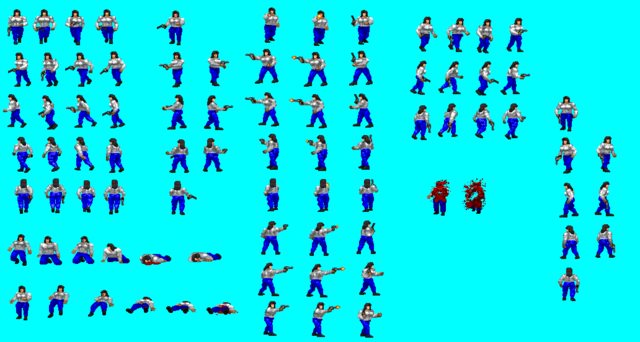 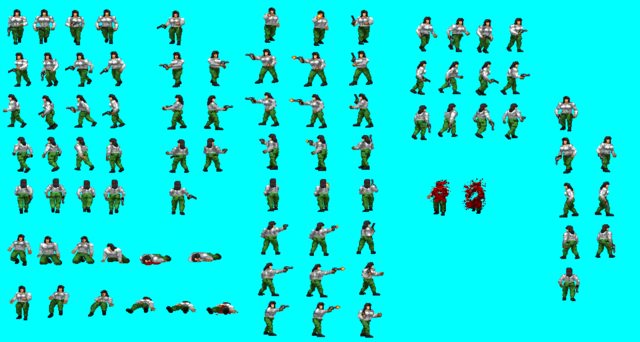 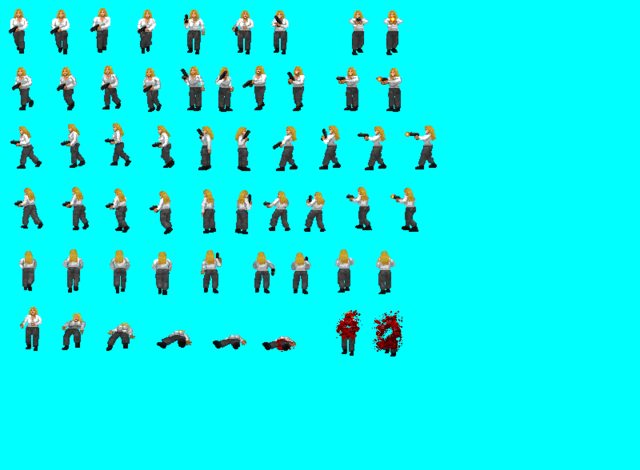 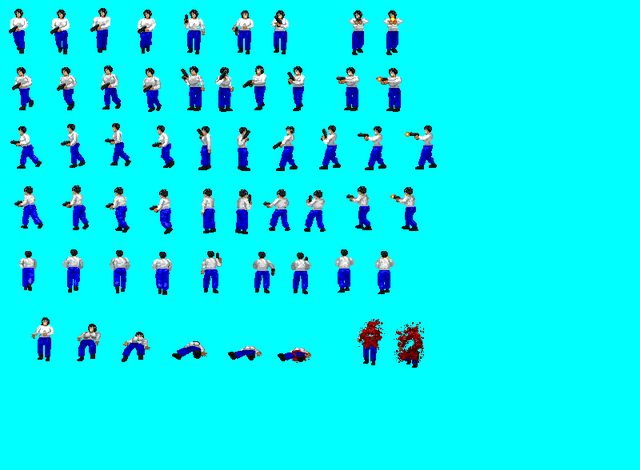 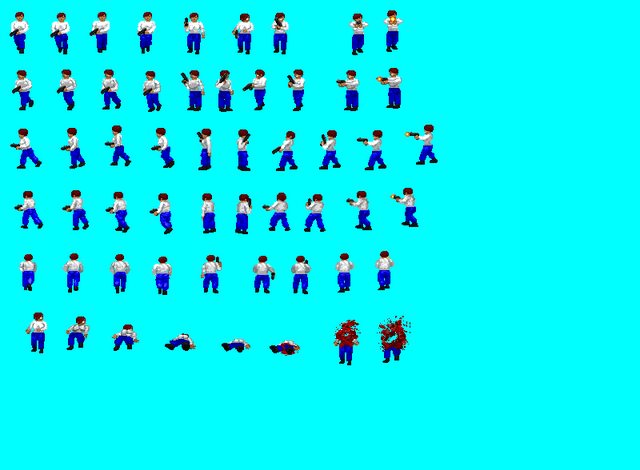 Feel free to uses these in any project you want. no permission necessary. But would be nice to see DeeDeeOZ in credits if used.
You do not have the required permissions to view the files attached to this post.
Last edited by DeeDeeOZ on Sun Apr 24, 2022 12:17 pm, edited 25 times in total.
Top

Excellent work! That feller in the waistcoat and tie is particularly dapper-looking
Top

Very nice, thank you. A good civilians resource has been a long-standing need in the community IMO and this really helps plug that gap.

I'd suggest that the art style isn't quite "Doom style". The Mars 3D style is a bit... "heavy" I guess (thicker limbs, bolder and darker facial features) and the sprites from the game have a more hand-drawn look compared to the Doom ones. All that being said, the edits go a long way to reducing those difficulties and the appearance is Doom-like enough IMO. They will certainly be more useful than recoloured zombiemen with their hands in weird positions because the only other editing was to erase their rifles.
Top

I Also very much agree with Enjay about art style not being pure Doom style. Actually have some more of these in more Doom style made from the zombies scientists and that guy from Operation Serpent, But they are very much other peoples resources and not comfortable sharing those without getting permission. also have a bunch of recolored zombiemen with there hands in weird positions....

Skelegant wrote:Excellent work! That feller in the waistcoat and tie is particularly dapper-looking

Agree whole heartly actually my favorite guy.. but not as much as this guy!!
dapperyousay.PNG
You do not have the required permissions to view the files attached to this post.
Top

one small nit-pick, the black man's head is noticeably lighter than his arms .
Top

It is. was half way through doing them when i actually noticed. less noticeable from front then sides. was kinda hoping that dooms palette would merge it better then it did but sadly no such luck! was actually planning on doing more of these at some point soon, probably with some useful occupations like construction workers, finish the cop possibly some armed thugs. will make sure to fix the skin tone then. currently working on something else that i really need to finish first.
Top

DeeDeeOZ wrote:
was kinda hoping that dooms palette would merge it better then it did but sadly no such luck!

i do not stick to doom palette when coloring sprites just go with what works on PNGs and when ran in game it sometimes gets adjusted to closer color. Plan on fixing this.
Top

An easy way to fix that kinda thing is to select only the offending colors with the magic wand, cut em out, monochrome em and save em as a separate png, then load it up in slade and repalette it to the color you want, then export it and slap it back on the sprite and job's a good'un
Naturally this approach works best with a full spritesheet, otherwise you're left with a fuckton of busywork if you try doing it to individual sprites lol
also just a quick heads up regarding the chaingun girl heads, she doesn't have a nose so you might wanna slap one on there (unless your char lost it in cosmic gladatorial combat like the original did lol)
Top

Thanks. The monochrome,Slade recolour system is what I use. Also still have all my spritesheets as I am somewhat of sprite hoarder (this is a understatement) so should be fast when I get to it. Cheers for heads up on no nose, really like that head has heaps of character
Top

Awesome sprites. Imagine creating a map where you killing those civs (WARCRIMES.WAD). Just a joke...
Last edited by Armolitskiy on Fri Jul 30, 2021 1:40 am, edited 2 times in total.
Top

Armolitskiy wrote:Awesome sprites. Imagine creating a map where you killing those civs (WARCRIMES.WAD). Just a joke...

Welcome to the forums; that might not be the greatest thing to joke about.

Finally got round to fixing the African male guys skin today. Download has been updated. Might be doing some more(or better) versions of these soon.

EDIT*
CivRedux.PNG
In-progress Teaser
-waistband gun optional
-not all will have DoomGuy buffness
You do not have the required permissions to view the files attached to this post.
Top

Now this what we need in DooM more civilians keep it man I'd like to see where this is heading!
Top
75 posts