The main problem with the Win10 calculator for me is that takes ages to load so i use online calculators whenever possible. I have a mechanical drive but i bought the computer back in 2018 so it's not that old.
Top

If you want the old calculator back, then Microsoft did have a download for the Windows XP calculator (the power tools enhanced version). They removed that link, naturally, but if you can find the installer it will work on Win 8/10/11.
Top

Which works good enough for me. 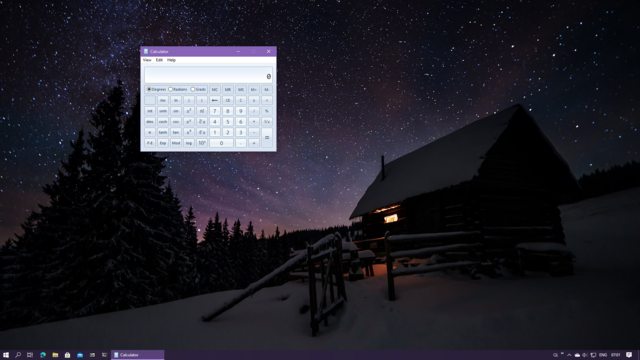 I liked the XP version better because it didn't distinguish between programmer and scientific mode which made working with hex numbers easier.
Top

Thanks! It works well.
Top

calc.exe really is a bizarre case of making such a conceptually simple program worse and worse with each iteration. How it is possible to mess up something so straightforward, with a real-life counterpart that everyone is familiar with, in such a bad way is beyond me. Have these people never actually used a calculator?
Top

No, but my guess is that their telemetry was feeding them bogus information about how people use that thing...

Based on what i have seen, there is no incentive to do the upgrade and ill block it when it would be asked.

Which ironically is a tale of its own. My dad, separated from the Windows church and into the communion of Linux, found that Windows wanted to install a few KB updates. For some reason Microsoft still cannot understand that a simple update for a simple program should not necessiate a full on restart of the computer, but i digress.

The problem was that this update started downloading and executing instantly.

Knowing there is a way to block these, i found that Microsoft used to have a tool to ''hide'' these updates. Except by hiding, you also had the option to actively ignore indefinitely instead of the 2 weeks it does now.

Since this is something useful, Microsoft actually removed it from their own site.

My dad ended up at Majorgeeks after giving him a pointer and is happily living since.

Why this rant? Well, because if Microsoft is so hell bent on the end user having to install updates beyond the fact that they need to restart for the tiniest thing that they actively remove any end-user choice to surpress said update indefinitely, then you can imagine how i think about the W11 ''requirements''.

The fact you can bypass it with a registry edit makes it laughable. I much rather would install Linux on the thing and just start getting adjusted to that, instead.

Redneckerz wrote:I much rather would install Linux on the thing and just start getting adjusted to that, instead.

Unfortunately that's not a realistic option for most users because the software they need does not exist there.
Linux is fine as long as all you need is a web browser and email client - or if you are willing to invest a lot of time into the system.
Top

The package manager that comes with most modern distributions actually make Linux a quite viable choice for most users. The only thing that makes Linux fall short, actually, is its lack of popularity. Yes - it's got its problems - but being not well-known is truly the most major one. Trust and believe that software vendors would perfectly well make Linux versions of their games and programs if the market share ever got past 10%.

Every time I put complete computer novices on Linux they're up and running with it within a day, no problem. It's easy to use - unless you're just so used to Windows that you know of no other way.

I'm not trying to simp for Linux but there's so many misconceptions about it that simply aren't true. It's not perfect and I know it has its issues but it is usable in its own right and truly can be used as a daily driver - no matter what your purpose. It's really no worse than Windows is, in that regard.
Top

I could give my mother, who is a complete computer illiterate, a properly set up Linux system and she'd be able to get along with it.
On the other hand, if I gave my brother, who is a moderately experienced user, a Linux system, he'd be totally lost.

What's the difference between them? My mother does not have any special needs. A web browser and some photo viewing software is nearly all she needs.
My brother has no idea about the internal workings of a computer, but he knows how to install software and use it. Bad luck that his interests do not intersect well with what's available on Linux.

IMO Linux's problem is not lack of "trust and believe" but that distributing professional software on it is such a messy proposition that few will try.
Top

I really don't understand how people still willingly use arithmetic calculators. I've been using SpeedCrunch for years on all three platforms: https://speedcrunch.org/
Top

Maybe because for most quick calculations they are just good enough?
Top
148 posts