I have only just got around to checking this. Why has it taken me so long! I have wanted a Half-Life or Red Faction-like weapons selection system in Doom for ages (especially for mods with lots of weapons) and this (particularly in Blocks mode) absolutely hits the mark for me and then some. I had been using Py Weapon Wheel (which is, of course, still very good) but I really like this - particularly Blocks mode - so Gearbox will now be my go to weapon handling mod. I've tried it with several mods and, so far, everything - as far as I can tell - has worked glitch-free and it has really simplified working with big many-weaponed mods. Thank you very much for Gearbox.

I don't know if the subject has been addressed (one way or another) in the thread, but I personally would feel Gearbox could be enhanced further with some nice unobtrusive sounds (e.g. a simple click or quiet short beep when going through options and a slightly firmer confirmation click or beep on selection (and possibly a "no selection made" cancel sound for the final icing on the cake)). Sounds are by no means essential, but I think it would be nice.

Also, I notice that the original post says "Tag property is also nice to have". I have tried a few mods with weapon tags but the only time I see tags displayed is when I use WeapPrev/WeapNext (which I do not currently have set to trigger Gearbox - though that is likely to change

). Tags never get displayed when using Gearbox - they don't appear on Blocks, on the wheel or anywhere on screen if either of those methods are used to select a weapon. I have displaynametags set to 3 in my ini (show for items and weapons) and I do see tags when Gearbox is not loaded. So, are tags meant to be used by Gearbox somewhere/somehow or is it just that the tag property is indeed nice to have even though Gearbox doesn't use it?

[Edit] Something else that I thought might be a "nice to have": I don't see an obvious way to disable the Gearbox unless I simply don't load the PK3. Might it be possible to extend the style selector to "Blocks", "Wheel" and "None" (or somewhere else in the menu) so that the mod could remain loaded but inactive in situations where a player might want to original behaviour?

I'm not sure how useful (or achievable) either of these are, but they struck me as things that would make sense to have as options.[/edit]
[/Edit]
Top

Thanks for the elaborate feedback!

- Sounds: planned.
- Tags: currently they are not used, but I want to add weapon names to both views (probably as an option).
- Slot keys: there will be an option to not open Gearbox on slot keys. I believe this also serves as a way to keep original behavior (no overriding next/previous weapon and slot keys).
Top

Tried to use this for Hexen, but no menu appears, weather i set it to wheel, or blocks.
I guess Hexen is not supported yet...?

EDIT: Nevermind, i got it to work the moment i changed to another map. I guess loading a save game after adding the mod does little in the way of init the mod.
But as soon as i crossed to another map, the mod worked instantly... kinda gave a jump scare really...
Top

Are you sure you have keys assigned, or set Gearbox to pop up on numbers or prev/next weapon keys?
Top

When using this mod with D4D, the "open on next/previous weapon key press" option in non-functional. It works fine otherwise.
Top

albinobigfoot, I cannot reproduce your issue. I tried both stable and bleeding edge versions, both loading Gearbox before and after D4D files. I haven't played D4D much, so I may be missing something. Do I need to configure D4D in some specific way so Gearbox "open on next/previous weapon key press" doesn't work?
Top

Could you please add an option to display weapon names? When playing mods adding a ton of weapons for one slot it can be confusing to pick up the right one.
Top

Gearbox updated to version 0.3! Thanks to everyone who reported bugs. This is very important for me, because I don't have as much free time as I used to have, and I cannot always thoroughly playtest all new features. Also thanks to everyone who suggested features and gave feedback - it's enlightening to see other people's opinions and ideas. 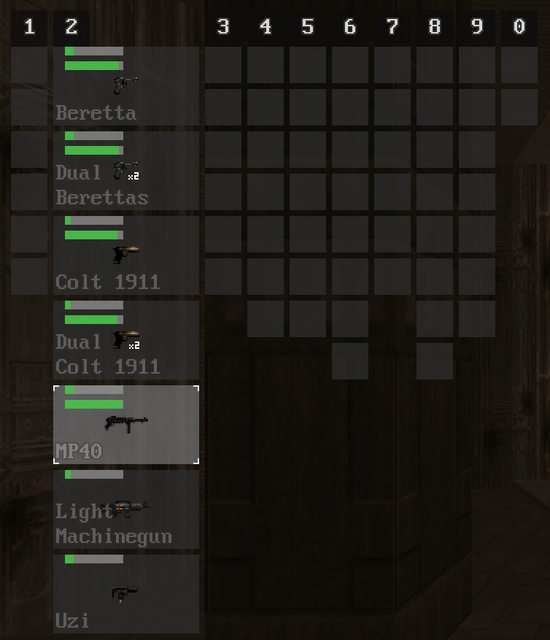 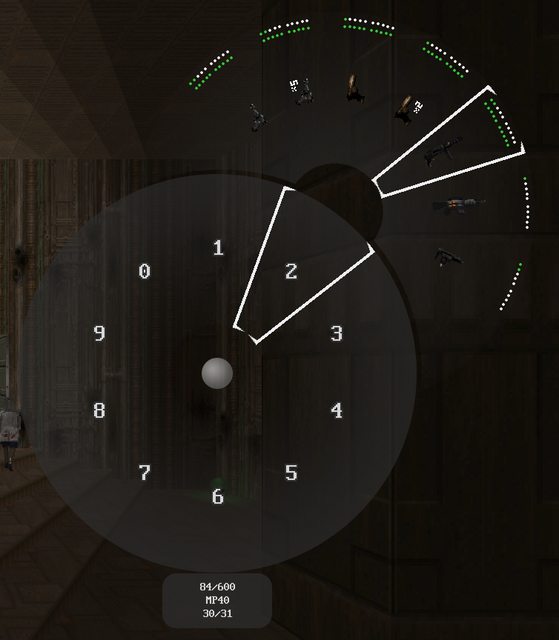 I have more things planned for next versions of Gearbox, so stay tuned!
Top

My USB mouse sometimes does every month that switches to another weapon without touching its mousewheel.
Thanks for this very useful utility mod, I can save more time assessing what kind of weapon I should switch at many situations.

Absolutely! Some very nice additions and options there. I like the "lock positions" option (although blocks is my preferred style) and it's nice to see weapons tags being used. The sounds really add an air of professionalism to the mod too. Fantastic stuff.

[edit]Minor glitch - the sounds can be heard on intermission screens. I have my mousewheel set up for weapnext/prev and if I move the mousewheel during intermissions I can hear the little gearboxbox clicks.[/edit]
Top

Since I last asked if you could improve the wheel controls, the blocks version has grown on me a lot and I really enjoy it. That said though, the wheel feels almost perfect now and is much better, making it a really tough choice on which style to use. Great job on this update and thanks a lot for all you do.
Top

By the way, I haven't fixed this issue:

because I cannot reprocuce it. If anyone can, please let me know how to do it.
Top

Thank you for the quick update. I was wondering why sound toggling wasn't in (not that I'll be switching it off).

I just love how professional and "part of the engine" this mod feels.


I wonder, at some point might it be possible to add an option that if the player has the "totally frozen" property set using ACS SetPlayerProperty that the gearbox won't pop up?

The reason that I ask is because I have set up a cutscene the teleports the player to a little room (for safety), totally freezes him and then puts up some full screen graphics using HUD messages. However, if the player uses weapnext/weapprev, the gearbox appears over the images. It's possibly a fairly niche request, and certainly not urgent but if it is possible to add as an option, it would be appreciated.