Please don't put requests here! They have their own forum --> here. Thank you!
19 posts 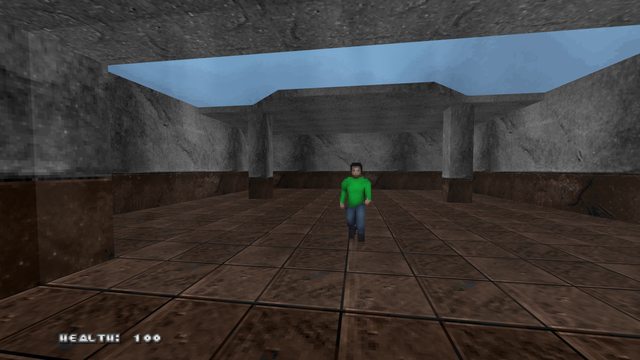 This is a standalone IWAD (.ipk3) that contains the absolute bare minimum assets needed to cleanly start the engine with no errors or warnings.

- Contains a custom palette made by me from scratch - this palette is libre and you therefore won't run into any legal issues.
- Contains basic lumps, some basic textures and graphics, a basic player sprite, some basic ZScript classes and a simple test map.

Should be easy to modify - just do a search-and-replace for everything 'MyStandaloneGame' and 'My Standalone Game' and you're good to go.

The game starts with modern-style controls (WASD + mouselook) and unfiltered textures, while everything else is left to engine defaults. You are of course free to edit your game defaults as you please - just edit defbinds.lmp and defcvars.lmp.

TIP: Use Rachael's config converter utility to generate your game's defaults based off your personal config files! Generally, the procedure would be to load up your IWAD in a fresh installation of GZDoom/LZDoom, run the game, set the options to your heart's content, exit the game, rename the INI to 'gzdoom.ini', place the INI in the same folder as convert-config, then use convert-config like this:

Use this to quickly prototype a custom standalone game project for GZDoom.

You must start the game using the following command to properly load it as a custom game IWAD:

All assets, except the fonts, are created by me (Nash Muhandes) and are released under CC-0. For more details, read license.txt and credits.txt

You do not have the required permissions to view the files attached to this post.
Last edited by Nash on Thu Sep 01, 2022 6:08 am, edited 7 times in total.
Top

Ooo, bookmarking this. Thanks Nash!

Potentially very useful. A lot of people ask "what's needed for a stand alone game" and the answer is now a link to this thread.

This is great! A basic "get-up-and-go" starter package with all the assets you need to get going immediately.
Top

I have been told that this does not start up on non-devbuilds. My mistake - looks like I was using some devbuild features.

For now, all you have to do is delete the included defbinds and defcvars lumps. You'll have to regenerate them using Rachael's config converter. I most like won't update the download in the OP because it'd be pointless to remove it now, then re-add it back when the next version of GZDoom comes out...

It should always start on dev builds. If it doesn't that means it's a cvar we missed, please report it, that's rather urgent especially with an upcoming release.
Top

It's OK, it does start with the latest dev builds. It's the older builds and the last official GZDoom that it won't start with.
Top

Ah - yes, defcvars will not even start if you use a version more recent than its config version.

@ Nash: To fix this problem, you will have to start GZDoom on 4.4.2 first, using your current config, *then* run the config converter utility on the file that 4.4.2 produces.

The other thing you can do is bump the version number down by 1, and then remove the new CVARs from Defcvars one by one until it stops erroring out on startup.
Top

Yes, the defcvars issue is already fixed on my end. However now I run into another problem (as you've seen me ask on Discord) - it seems LZDoom has no fallback fonts and will fail to start if no fonts are bundled into the IWAD. Looks like I'll have to be creating my own libre fonts (both smallfont and bigfont). This turned out to be more effort than I initially thought it'd take... >_<
Top

Updated to version 1.1. Cleanly starts with no errors on both GZDoom 4.5.0 and LZDoom 3.87b. New sprites, textures and graphics.
Top

Hi,
I'm really glad I found this resource, because it's exactly what I need for a project! Unfortunately I'm running into a really weird issue, but not a major one now that I have identified what is happening partially.
The template was working fine, and I had barely begun trying some map editing and adding textures with it. Strangely, when I added some new textures to the ipk3 and loaded it into GZDoom (I am using the GZDoom version), it started prompting me for an iwad anyways even when I supply it one by dragging the iwad/ipk3 onto the executable, launching it with SLADE3 directly, or using a launch parameter on the command line. This leads to a launch error, that seems to be the source port freaking out about there being multiple player objects and huds loaded, due to the source port loading twice:

This seems like a source port problem to me, but I'm putting it here because it only affects the template ipk3. Launching Doom 2 with a parameter also brings up the iwad prompt again, but it loads fine.

Could this be an issue with the template? I just want to ask before I put this issue on the GZDoom github. Thanks.
Top

This is GREAT! Thanks!
Top

I really appreciate the effort put in here, it is really useful on digging through how everything is loaded in to a base game unit.
Though I'm also seeing the same error as PowerUpT. Happens on gzDoom 4.8.2. And I tested on a clean 4.5 as confirmed by Nash in the OP, but no luck there.

Renaming the class to match through each file just gives me the error for the new name.

Best matches I could find on the issue are the class being loaded in twice. Though after triple checking the zcsript #include in SLADE each of Player and HUD are only being loaded once. Suppressing HUD and trying to narrow it down on Player also lead to no success.

The entire thing is due for an overall update and I just haven't been able to look into these issues yet. Seems to be a very common problem. I'll take care of it as soon as I can (well, as soon as I figure out what's actually going on, that is - I don't seem to be getting these errors!)
Top

If there are any logs we can generate to assist, do let us know.
Top
19 posts