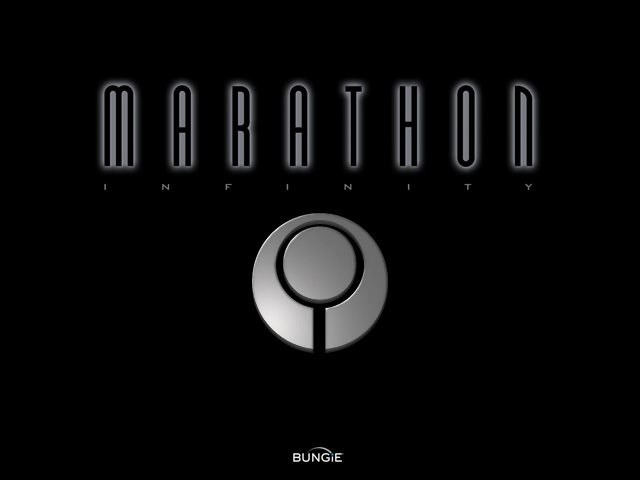 Hi everyone! I am new to these forums and this is my very first mod that I'am posting in anykind of forum, so forgive my noobiness

Well...Like the original author TwelveEyes had made a long ten years ago...I'd say that I perfected his work

unfortunately,I began reworking with his mod too late to be really called an update and he probably won't know more of this but...anyways, here is my reinvention of his mod:

I would say that I improved about 200% more of his original work as I added a lot of stuff like...

Major And Super Versions of the Original enemies;There is a slight random chance that some major version of your common pfhor might spawn alongside with the super versions,which is way more powerful than the minor and major(although fighters and troopers only have minor and major versions to balance the fight because of the BOB's)

Enemy Weakness
Some of the enemies have certain kind of weakness towards certain weapons like the HUNTER, whose resistance relies towards bullet weapons, but due to his hardshell armor he is Very Vulnerable to the Zeus Fusion Pistol and Explosive Damage(these pretty much make a "purée" of him)

another one who received some attention is the yeti...Who now have resistence to the zeus pistol but is vulnerable to the Flechette from the Infinity game and the flamethrower
with the exception of his lava version that is immune to fire attacks

Powerups!
Now it's even easier to distiguish between them(a problem that I solved

),all of them are like these silver balls but with some special effects aplyied to differentiate...

Mega Sphere is a golden sphere with colors transitioning from red to blue to green...you get it.

Infrared same as supercharge,only that this one make a transition from black to green.

Invulnerability Sphere has this weird glitch effect(like the original game!)

that's sums up for the powerups,Now for the...

BOB'S
your old pal's from the marathon are even more diverse and more interesting in their behaviour towards the world,ESPECIALLY YOU!

you simply can't go all out postal killing them in the process because if you do...they will get angry

and will attack YOU for the rest of the map until you finish it.Be careful when using explosive weapons because they spawn alongside the pfhor and let's be honest...you don't want hitscanning glass cannons enemies,don't you?! still...be tactical with them,you can kill at least 3 until hell breaks lose,so kill them when absolutely necessary like the magnum pickup wich only security bob's drops

the same applies to Vacbob's...

Keep a lookout for the Fighters and Troopers,they priotize the killing of your BOB's instead of you(can be a distraction if needed)

didn't have much of a change except for the fists,Rocket launcher and the Flamethrower(the last one didn't work in the original) SOME WEAPONS DON'T WORK UNDERWATER!

Flamethrower This is probably the biggest diference between this remake and the original because...it simple works now

; this one ripps through enemies and it's specially effective against those weak fighters and troopers.

Rocket Launcher has some kickback now,like the original and takes a while to arm it making it seem more powerful than the simple one made by the original author

the magnums and shotgun also received some care,but,you will learn from playing it

well...that's all! There is simple too much to cite here but the most important ones have been said, the rest is up to you to discover and play. 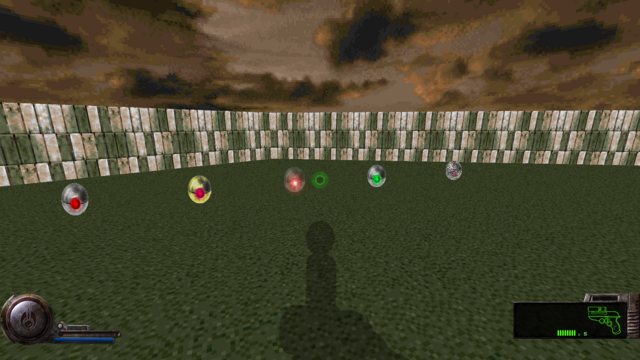 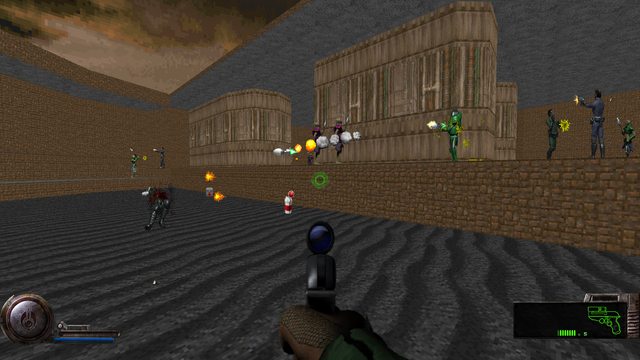 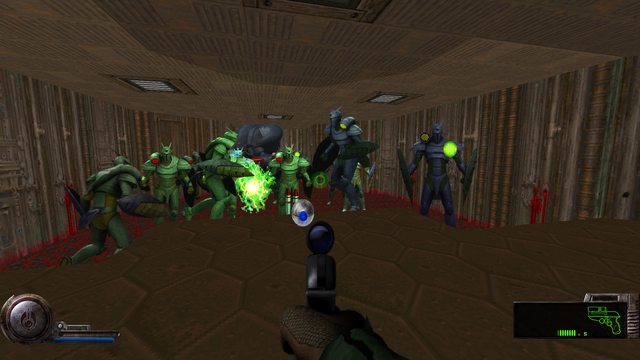 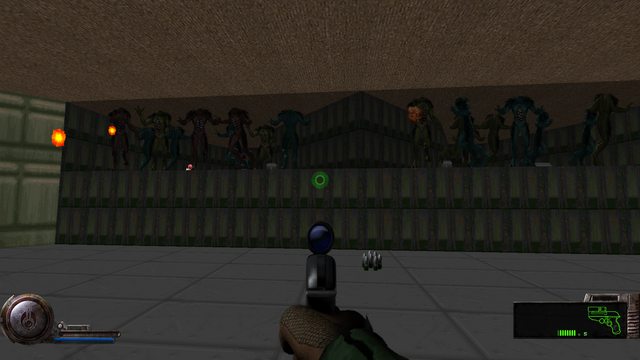 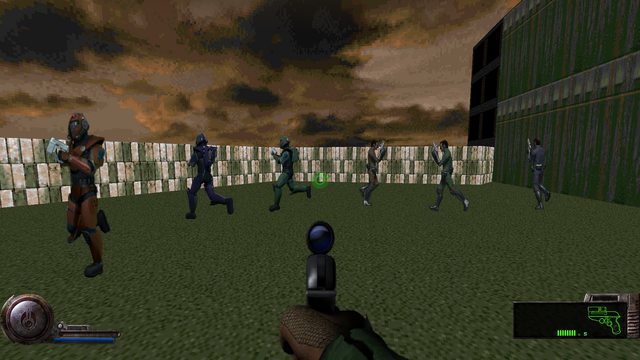 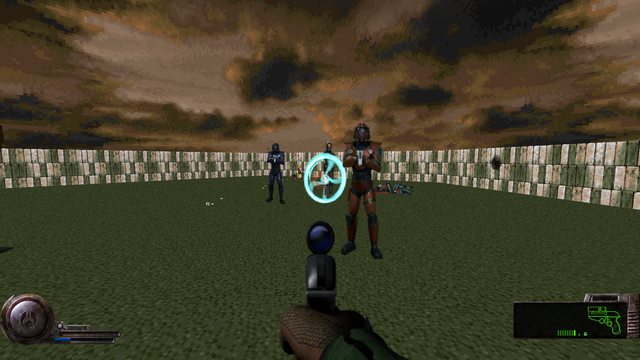 "TychoVII & Hopper for the HUD (FloatingX HUD for AlephOne)
CryoS for the music
Nash for the blood effects (nashgore.wad)
Enjay for the splash and flats sounds (NJSPLASH.wad)
Xaser for the male jump and land sounds from Psychic (psy-pbt3.wad), dual wield code from Parkour-X
ZeroProphet for the player land sound from Zero Tolerance (zp-zerot.wad)
SGtMarkIV for a simple code that resets the Bob's hostility at the start of each map
Also to the individual who made the Doom smallfont in Claustraphobia 1024 2 (1024cla2.wad)
and Bungie for making Marathon freeware."

TwelveEyes - For being the first(at least to what I know)to make a marathon mod,and being his base mod for the remake I did for doom and tried his hard to do it,Really thanks man!

PS.:For what I know it runs kinda nice at the Gzdoom 4.3.3 i don't know if in Zdoom will give any problems so I would stick to the Gzdoom version

PS.2:You may get some perfomance problems because of the HD enemies and scripting of the akimbo weapons but it is just for the first time;later on it stops with the usage.
Last edited by TheXGamer2020 on Fri Aug 28, 2020 8:59 am, edited 8 times in total.
Top

This is outstanding. One question though: how do I activate akimbo?

EDIT: Upon further inspection it is impossible to use a second magnum, but the dual shotguns/fists work fine.
Top

Seriously?I've should have tested a little more before posting...alas which version of the engine are you using? You didn't run into any other error into the loadout didn't you?

PS.:you activate with the Secondary fire

Neverthless, I will see tomorrow into any other problem that arises and post an update If more people runs into your same problem with the magnum until then have Fun!
Top

I'm using 4.4.2, but that's the only issue I'm having. The mod works great overall.
Top

I never played the original, so I dunno if this was the original design or what, but...are the simulacrums *supposed* to make me paranoid around any kind of BOB?
Top

dawnbreez wrote:I never played the original, so I dunno if this was the original design or what, but...are the simulacrums *supposed* to make me paranoid around any kind of BOB?

Yes. Listen closely to what they're saying - certain lines are only spoken by the fake ones.
Top

Right, so I found out that I needed to spawn "Magnumpickup" in order to dual wield them. "Give All" won't do the job directly. Sorry about the confusion. This mod is definitely one of my favorites.
Top

If I had one thing I'd ask for, it's less spread on the Assault Rifle.

(...also, can we get manual reloading please?)
Top

Very accurate and amazing mod. I really wanted to see some good ol' change to the old marathon doom mod and now it's here! And i do love the HD sprite of the enemies because now i see what's going on with their faces.

So issues of the mod so far is the long white flash on my screen once the boss is defeated. I get the point that you defeated it, but you don't have to blind me, in both ways, during the serious firefight. And i honestly think the weapon sprites might need some scaling. Have you seen what it does to both Assault Rifle and SMG? I think it's possible to shrink them down without editing graphically.

EDIT: Oh and i forgot. Juggernauts are so big, sometimes they get stuck in some area and can't get out. For example, see Doom II's 32th map, Grosse.
Top

Nice job with this any chance of having an option to switch between the hires sprites and the original sprites?
Top

Wow...I didn't know my first mod would get this far,thanks people for playing it!

1º[RELOADING]:Weapons can't be manual reloaded,simply because marathon was designed this way and I followed the original to the letter. --> dunno,can change if it's a problem for all

2º[SWITCHING SPRITES]:the option is something do-able but it will take me some time to code it (let's say I'am a very hacky programmer

3º[JUGGERNAUT & FLASH]:yeah...It's really a problem that I had the "honor" in a firefight that I died annnddddd...yeah i will change it,about the height...I will think about it;This map in particular have this thing and his height size is at it's peak(it fit perfectly with the sprite) --> I will see both.

4º[ASSAULT RIFLE & SMG]:the AR is like a "minigun" of some sort plus the grenades are accuracy-perfect...I can change it's rate of fire to fit more like the original but the spread is to counterbalance and follow it. The Sprites had this problem being too big for the screen and I will need to change it graphically, or a code for a vertical sway like Marathon...precisely a permanent vertical sway like the mod made by Boondori --> Not a problem

Ewwww...pronto!! Anyways...thanks for the comments, reports and ideas above...I didn't give this mod too much attention from time to time so in truth, it was ready by 2017 and I only did some little doings by then.
Top

I probably could shrink and angle weapons of the mod by making some kind addon, just for you. If i have time to do so!
Top

thanks for the attention,but for now I will leave it be...as I am already working on another mod(and it's a little harder this time 'cause it's being made from scratch)
Top

Aw... Hope it will be worked with again some time.
Top

Would it be possible to get a weapons only version in the future?
Top
21 posts