Vostyok wrote:Great to hear this! I did consider having modkits be something like Trailblazer. You collect scrap and turn it into mods using an inventory item which is always carried, say. I might do this in the future, tbh. Will give me an excuse to replace the blursphere with a new stim type or something. I dunno.

That sounds pretty good. Would that also account for Pipe Bombs? Since eventually you'll have all the upgrades and have nothing to do with the scrap.
Top

We'll see. Might have it so you can craft ammo instead. Or something else entirely. It all depends on how my planned changes for Episode 3 work.

Nice. Ahh, I was also curious if the backpack and armor upgrades will be enabled in the weapon pack eventually. I did make up some spawn conditions in my copy.
Top

See above - for now, probably
Top

Vostyok wrote:your Terminator fantasies by blowing away raiders with a plasma rifle.

Yes, cyborg-terminator monsters and flying hunter-drones would be on point, along with a superboss in 2063.
A scavenger on a cart carries a lot of weapons. There is not enough weight limit for him in the inventory to somehow diversify tactical planning. (Yes, yes, I know that this is a doom and doomguy always carries a lot of weapons on a cart. But can't I dream?)
Top

I mean, considering how there's a sterilized version of Ashes' maps plus mods out there with carry limits like HDest, it doesn't always have to be a dream.

Spoiler:
I Just realized that the guy who gets nuked along with all his stuff while fleeing prosperity may not even have been Smiley

, he could have been the guy who sells you overpriced 556 Mags, he probably had a secret stash full of ammo and guns he somehow got from the armory, the resistance or the guards and was planning on selling them in another place, maybe he saw smiley getting out and tried following him in order to avoid being picked off by raiders with his stash or to try and rob him or to ask him how he got out or something or someone overheard him selling you 556 and the rumour spread so he fled with his stash on his truck, just like someone overheard you telling silver about the mutant scavs in the power plant, we know rumours spread fast in prosperity because If you go to hear the news from the guy next to the pit fiend races after telling silver about his friends he will already have that story...
So i think he fled prosperity with his stash of guns and ammo following smiley or/and scaping the baron and was caught n the explotion of the soviet sub.

Damn, Will we find smiley next town over?
I hope so.

Do i know too much?, Should i go into hiding?, Will vostiok send a

after my flesh?, Or will the

Vostyok wrote:Update to Sterilized Afterglow maps. Fixes a bunch of progression issues, the issue with the healthbonus/armorbonus replacers, some idle monsters, and a bunch of other misc fixes.

Unfortunately, that didn't work out. There are still bugs everywhere. Attached are some pics from Westside. And, by the way, there is no gas tank explosion effect when you get outside, just the tank crumbling.
You do not have the required permissions to view the files attached to this post.
Top

Can confirm. 1.2. Still has the junk items that are inherited from the bonuses instead of randomspawners that drop the original pickups.

Have chased issue. Mediafire link failed to update with the new file for some reason. The moddb version was the correct one. Have reuploaded, link should now lead to version with latest changes. Apologies for any issues.
Top 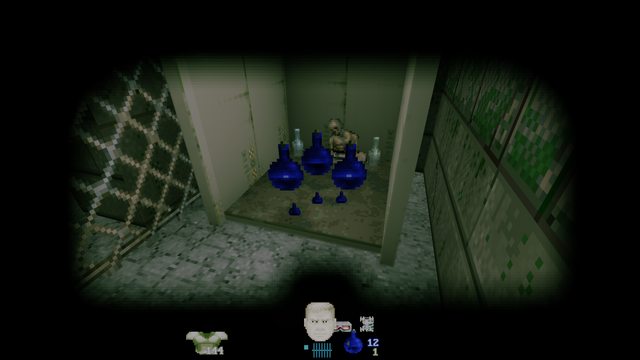 okay no idea what tf is going on here. I might have to rename the file or try posting it in a different domain as it doesn't want to overwrite. Sorry about this

So this problem seems to have been solved, but there is still the lack of radiation in most places that should be radioactive, like the outside areas in The Gap; and also in The Gap, the final boss makes the default Cyberdemon roar when he sees me.

What I also noticed is the lack of colored lighting in the Lazer Tag arena in The Flooded District. And I had troubles progressing through the parking lot -- please see the attached picture. I have no idea what to do there. Something seems to be broken about that whole area, as if some trigger didn't get triggered for some reason.

EDIT: Another bug in the Flooded District was the Destroyer not triggering until I touched him. I could walk past him to the side room with no problems. I thought it was some joke at first.

And in The Gap, once I crossed the long tunnel with the Gasbags and Overseers, a rattling sound (which I could identify as Sounds\AMBIENT\DSREVDOR.ogg) started to randomly appear, and it wouldn't go away until the end of the map.
You do not have the required permissions to view the files attached to this post.
Top

Ihavequestions wrote:And in The Gap, once I crossed the long tunnel with the Gasbags and Overseers, a rattling sound (which I could identify as Sounds\AMBIENT\DSREVDOR.ogg) started to randomly appear, and it wouldn't go away until the end of the map.

This one has been in Afterglow for a looooong while, since v1.04 at the very least. I thought that noise was for ambience, so I never said a thing about it.
Top

Never noticed it before. It's so weird.
Top
1728 posts